In July, we released a small but special Paris map to go with the larger France map created for the inaugural Virtual Tour de France. Paris’ Champs-Élysées circuit may only be 6.6km long, but it’s packed with famous sights and memories of past Tours de France.

As you ride under the lap banner for the Champs-Élysées route, take a deep breath, look around, and smile: you’re riding on one of the world’s most famous avenues! Known by tourists for its Arc de Triomphe as well as cafés, theaters, and luxury shops, the Avenue des Champs-Élysées is well-known in the cycling world because it hosts the final stage of each year’s Tour de France.

Since 1975, these cobbles have hosted the world’s top riders for one last highly-contested sprint finish. As the most high-profile sprint finish in all of cycling, a win on Champs-Élysées makes a welcome addition to any sprinter’s palmarès!

Watching pros race it, you may think Champs-Élysées is a flat course. But the truth is, it’s got a bit of a climb on each lap, beginning just after the lap banner. Montée des Champs Elysées is neither steep nor long, but in a race you can expect attacks here every lap!

The Lutece Sprint is also included in this short climb. If you’ve got the watts per kilo to grab green, go for it!

The cobbles level off as you arrive at Place Charles de Gaulle, the gigantic traffic circle that surrounds the Arc de Triomphe. Napoleon himself commissioned the triumphal arch in 1806 to celebrate the French army’s military achievements. Enjoy the view as you make your way around, then brace for speed as you head downhill! 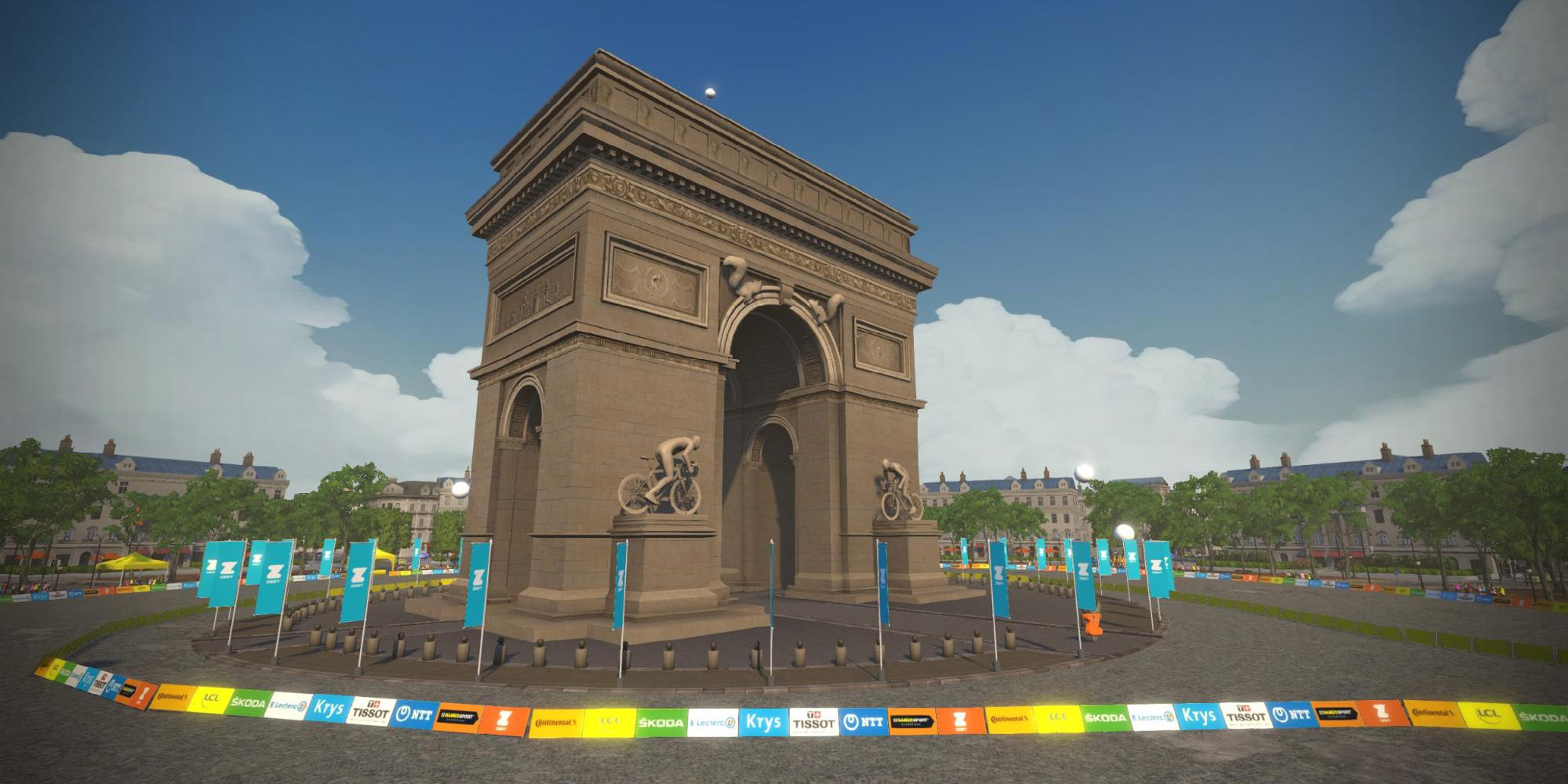 Look ahead toward the other end of your circuit for the Obelisk of Luxor, located in the Place de la Concorde. This obelisk is one of two built to stand on either side of the entrance to Egypt’s Luxor Template during the reign of Ramesses II. One obelisk remains on location in Egypt, while the other is here in Paris.

The Eiffel Tower is also visible off to your right, in the distance.

As the road flattens you may spot the Grand Palais and Petit Palais to your right.

The road turns right to take you around Place de la Concorde and Jardin des Tuileries. This is the area where team buses set up each year, and we’ve turned it into an esports expo with spectators, tents, and a big screen!

The plaza and buildings to your right as you dip underground into the parking garage is the Louvre Museum, pre-pyramid. Look for the historic hot-air balloon floating above the plaza!

We do hope you enjoy riding the cobbles of Champs-Elysees. Best of luck on your sprint finish!

Routes on the Paris Map

If you enjoyed Paris' famous sights, you'll love our French map and its massive Mont Ven-Top climb. Read all about it!

Bienvenue en France! about 1 year ago