Join them for regular friendly rides in the mornings in European and UK time zones. If that doesn’t work for you, try the evenings in those time zones on Mondays and Fridays, where several hundred riders form a sea of pink!

“We may include intervals over and below the ride average advertised power range, but we will allow enough recovery and time to regroup after every effort,” reads the ride description. “We welcome good chat and a social atmosphere for new and experienced Zwifters alike, everyone is welcome.”

The pace of the EVO CC Flux Ride is 1.8-2 w/kg. Ride leaders sometimes incorporate a few ramps and intervals at the end for a bit of fun, but they are careful to keep their average within that range.

Depending on the day and time, the Flux ride can attract between 150 and 900 Zwifters! It started as a weekday morning ride in Europe, but the later timeslot on Mondays and Fridays has become the busiest. It’s now one of the biggest rides on Zwift, welcoming riders from many different countries.

“The constant banter and encouragement from the group makes this ride special,” says leader Russ Cripps. “The number of regular riders that return week in week out testifies to this point. We even have one lady who wakes up at 3 am in Australia on a Saturday morning to join the ride.”

Evolution Cycling (EVO) prides itself on its experienced team of leaders and sweepers, Russ says, with the majority of its leaders having at least 3 years’ experience. The sweepers are well-prepared to help riders at the back of the group who need it.

Most of the time, the Flux ride uses flat courses, but be ready for something different now and then!

“(Riding flat courses) helps the leader keep a big group together, and it is also easier for the newer riders and beginners to Zwift,” Russ says. “The leaders, however, like to mix things up. We have been known to take the Flux ride up the Alpe du Zwift as a one-off and it was warmly welcomed with the feedback we had afterward.” 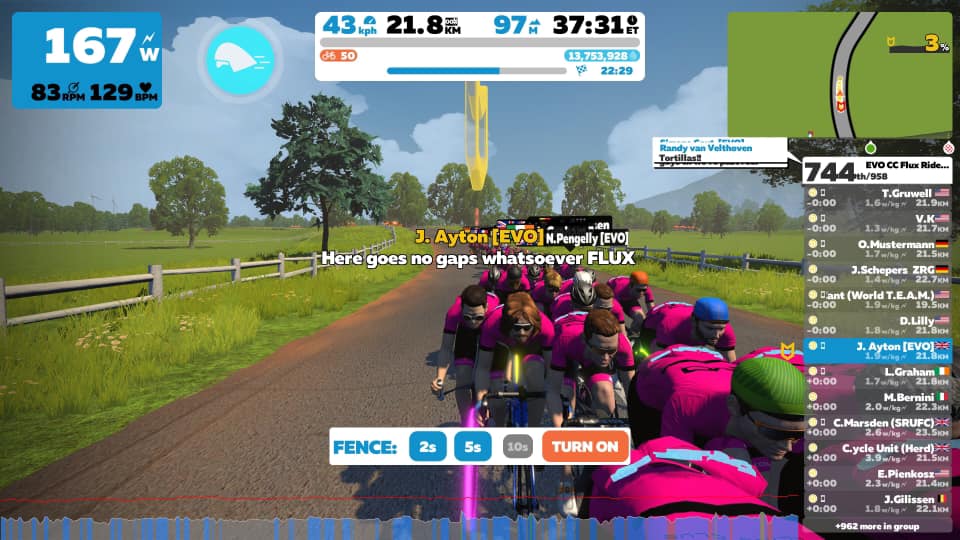 Leaders for the Evolution Cycling Club Flux Ride include:

“Flux was the 2nd Group ride that was introduced by Evolution Cycling (EVO), which started in March 2020. We wanted to introduce and cater for the beginner Zwift rider in the European morning slot. This was mainly due to the long-term experienced leaders being European. Within the first 3 rides we had over 100 riders participating in the ride from all around the world, and we quickly made the decision to make Flux 5 days a week rather than the original 3. The ride was started by Nathan Martel, Chris Radley, Russ Cripps, Adam Park, and Jonny Marston, all long-term Zwifters who have been leading group rides since 2015/2016.”

“Evolution Cycling (EVO) was founded on the simple belief that cycling via the Zwift platform should be inclusive and fun for all. We are a group that has an eclectic cycling-loving membership that values friendship and respect. Our focus is to make group riding and racing more fun and give our riders better fitness as a bi-product. … We are courteous towards others and our aim is to make every ride/race that we are a part of a better experience for all. Our goal is to be amongst the best groups on the platform, with the best group rides, that have the best leaders and support team to ensure that any person joining feels at home and wants to return on a regular basis.”

If you want to know more about EVO, the Flux Rides, or the club’s other events, check out the Evolution Cycling Club Facebook group.

Ready for a Challenge? about 1 year ago