On January 30, 2021, German ultrarunner Florian “Flow” Neuschwander will attempt to break the 100km treadmill world record, live on Zwift. We caught up with Flow to ask him about the challenge, why he’s chosen to partner with Zwift, and how you can run alongside him—if you can keep up.

Before that, however, Flow is hosting a social run on January 27 with a training session on Zwift, in preparation for the world record attempt. Offer your support by joining the event at 19:00 CET, following Florian “FLOW” Neuschwander on Zwift, and give him a Ride On.

Tune into the live stream 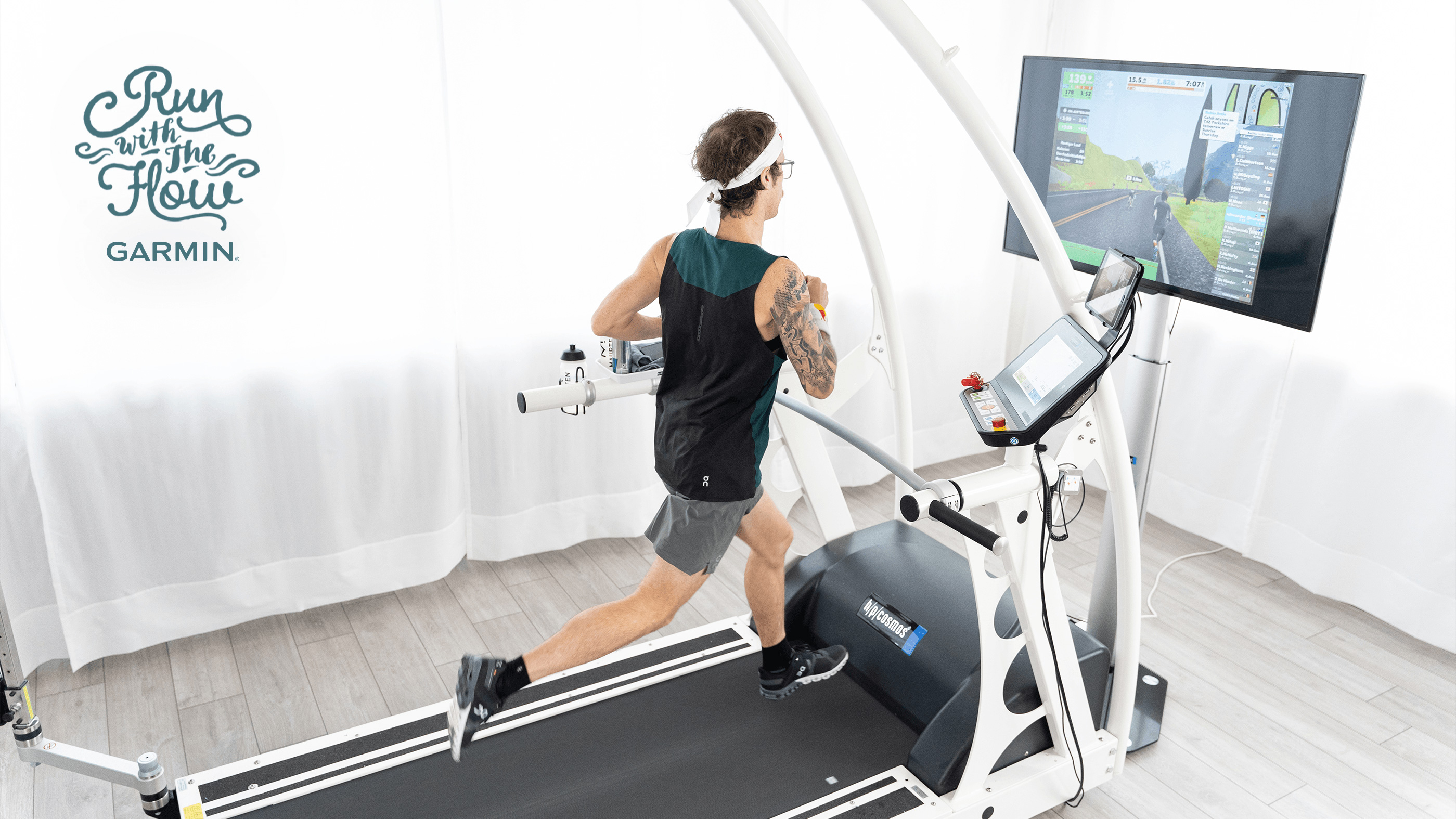 Hi Flow, how did you start running?

I’ve been running for 23 years. In the beginning, I was a track runner. I ran everything from 800m to 10k at the German Championships. I was also a cross country runner, even participating in the Cross Country European Championships over 20 years ago.

Then I started road marathons. I did my first one in Frankfurt in 2005, but I felt the distance was not long enough for me. So, in 2011, I did my first ultra distance and realised I liked ultras more than the shorter, faster stuff.

Did you know you were fast from an early age?

Yes, I was quick, but I was not the fastest on the track. I won some races and got some medals at the German Championships, but I was never the fastest.

I realised that the longer distances suited me better as my true skill was running quite fast for a very long time.

How do you fuel for your runs?

It depends on the distance. If I do a marathon, I probably wouldn’t eat or drink that much, only when it’s really hot.

For longer distances like 100km, I use the same fuel as for a marathon, just more—gels, isotonic drinks, and water.

You have run beautiful mountain ultras. So we have to ask: why have you decided to take on the great indoors and break a treadmill world record?

It’s a good project now that we’re all in lockdown.

Athletes have to search for their own challenges, I want to keep fit, and I want to be ready for races when the pandemic is over.

Do you train on a treadmill regularly as well as outdoors?

Yes, I do both. I live here in the mountains, but I also like to do the fast stuff. At the moment we have really nice, but really cold, weather. I don’t really like to run in -10 degrees. It’s sunny but it’s way too cold for a fast pace.

So I like to run on the treadmill. You can have everything beside you. You don’t need to carry a rucksack like on the trails. You can run in shorts, and it’s also safer. When you run outside in the snow, you can slip and get injured. On a treadmill, the risk is not so high.

How did you discover Zwift?

I’ve been using Zwift for a year-and-a-half. I started with cycling, but then I bought a footpod for running and started testing that out.

Now I want to do the 100km record on Zwift. I’m doing it in collaboration with HP Cosmos, a treadmill manufacturer not far from my home. I train there and use Zwift all the time.

Running on the treadmill helps me a lot over the winter. I can run at a good speed and, somehow, I like running long distances on the treadmill. With Zwift, it’s way easier because you stay entertained.

It motivates me a lot. I meet other people or I watch cyclists passing me that I personally know. That's funny and motivating.

Do you find Zwift is a good distraction?

Yes, of course. I have been running for 23 years and I know a lot of triathletes and cyclists. It doesn’t matter if I run or bike on Zwift, I always meet a lot of people that I know. I chat with them, although it’s difficult to chat when you’re running at a faster pace.

I enjoy watching people do their workouts at home and speaking a little bit with them.

Last year you broke the 50km world record, but it was then broken 2 or 3 times again the same year.

Yes, it was my plan to break the 50km world treadmill record. But when I posted it on social media last year, I received messages saying other runners wanted to do it! That’s when I learned that I was the first one to do it.

Then, just two weeks after, a Swiss guy broke it by one minute and, after that, two Russian runners and two Americans broke it again. Now the 50km record is so fast, it’d be impossible for me to get it again. So I’m going for 100k.

Can you tell us the kind of time you are hoping for?

The current world record is 6 hours and 39 minutes. 100km is a long time to run and if you don’t have a good day, it’s very easy to quit, but I honestly think I can get under 6 hours and 30 minutes.

Author’s note: That’s a pace of 3min53s per kilometer, which is around a 2.42 marathon time. It’s the equivalent of running 5 kilometers in 19-and-a-half minutes, twenty times in a row.

You are still relatively young in ultra terms. What goals do you have for the future?

I am an ultra runner but I still want to run fast over shorter distances. I recently did 30:09 in a 10K in training, so I think I’m still fast enough to go for a good 10K time.

My other goals are the 100km World Championships in Berlin in 2022 and UTMB (Ultra Trail du Mont Blanc), which is also a big target for me. I would also like to have another go at the Western States 100. I think it should be possible to get around 16 hours for that.

Of course, yes. Look at all the really good guys like Jim Walmsley, Killian Jornet, Tom Evans—they can all run 5K in under 14 minutes.

If you want to go for a fast 100km, you need to be able to do a 10K in 30 minutes or even faster. I’m an ultra runner but I still want to run fast over shorter distances. I recently did 30:09 in a 10K during training, so I think I’m still fast enough to go for a good 10K time.

We wish you the very best of luck with your 100km World Record attempt live on Zwift. Are you keen to have other Zwift runners running alongside you?

Yes! We want to encourage people to run beside me. Hopefully there will be some people with me on January 30.

If you would like to run with Flow, make sure to follow him on the Zwift Companion App and also set him as a Favorite, so you’re notified when he starts running on Zwift.

If you can manage to keep up with Flow for the entire 100km run (good luck!), then you’ll also be the proud holder of the 100km Treadmill World Record!

All you need to do is follow and favorite Flow through the Zwift Companion app, and then you can join the fun and run alongside him.

HOW TO FAVORITE FLORIAN NEUSCHWANDER  ON ZWIFT

All About Our FutureWorks Platform 4 months ago