During a long Zwift ride, having good company can help keep you going. And that's exactly what you’ll find on the EVO CC 160km Base Ride!

“The popularity of the ride, constant banter and encouragement from the group makes this ride special,” says Russ Cripps, one of the leaders of Evolution Cycling Club (EVO CC). “The number of regular riders that return week after week shows just how successful this ride is. Many riders schedule their other weekday/weekend commitments around this ride just so they don’t miss out on the social interaction with their buddies, plus they get the added benefit of increased fitness.” 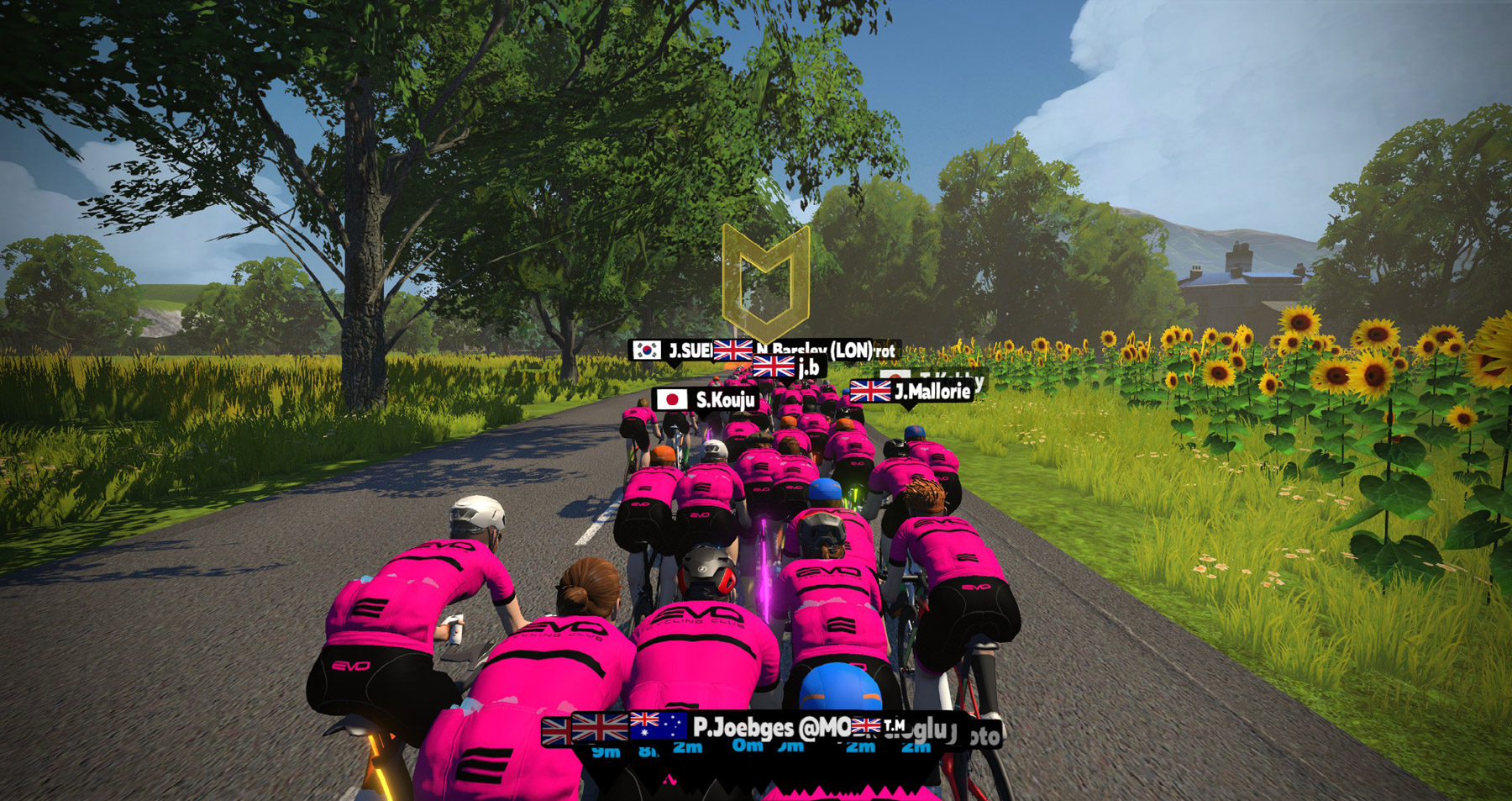 If you join one of the Evolution Cycling Club (EVO) 160km Base Rides, be ready for a long, uninterrupted ride with lots of socializing and chatter! The leaders aim for a steady 3 w/kg. That’s faster than some other “base” rides, giving Zwifters another option for a pace that suits them. Sometimes the pace will rise for climbs and sprints, or the group will play a game of “Hare & Hounds” to keep things interesting. But then the leader will drop slightly below 3 w/kg to keep the average on target.

“On these 160km Base Rides we’re in the saddle for several hours, so a flat(ish) route allows the group to chat and socialize by way of the Companion app,” Cripps says. “They are non-stop – we don’t have any breaks – all food, hydration and even toilet breaks are taken whilst on the bike!”

The group’s experienced sweepers are some of EVO’s strongest riders. This way, they can drop back to help riders who have lost the main group and bring them back, sometimes closing a gap of several minutes.

The 160km Base Rides attract between 150-300 Zwifters, depending on the weather in different locations. Weekends are popular times to ride outside, but as colder and wetter weather draws in, the number of Zwifters on the ride increases.

On some rides, pro cyclists have joined in, too!

“They join because the pace of the ride fits in with their off-season training, or because they want a steady long-distance ride, or because they perhaps joined once before and enjoyed the friendly atmosphere and social interaction from the group, which helps the time pass by,” says Cripps.

Leaders for the 160km Base Ride include:

Russ Cripps gave us this rundown of the ride’s history:

“The EVO CC Sunday 160km Base Ride has been on the schedule for quite a while now, with the first ride taking place in April 2020. Claire Joyce is the regular leader, with Bjarke Rasmussen and Phil Reckless as backups. EVO CC has recently taken over the running/organising of the Saturday 160km Base Ride from another club on Zwift (3R), but the ride itself originally started in November 2017 by Bjarke Rasmussen, who is also one of the founding members of EVO CC. Phil Reckless now leads this ride on a regular basis since it's move to EVO CC, with Bjarke attending when he is able to.”

“Evolution Cycling Club was founded on the simple belief that cycling via the Zwift platform should be inclusive and fun for all. EVO CC is a group that has an eclectic cycling-loving membership that values friendship and respect. The main focus of EVO CC is to make group riding and racing more fun, giving our riders better fitness as a bi-product. ... We are courteous towards others and our aim is to make every ride/race that we are a part of a better experience for all. Our goal at EVO CC is to be amongst the best groups on the platform, with the best group rides, that have the best leaders and support team to ensure that any person joining feels at home and wants to return on a regular basis.”

For more information on EVO and all the club’s events, including the 160km Base Rides, visit the Evolution Cycling Club Facebook group.

Asian American and Pacific Islander Heritage Month about 1 year ago