All About Watopia's Pride Lifeguard Tower

A lifeguard tower stands in Long Beach, California, painted in the colors of the rainbow.

It was decorated during June 2020, as a celebration of Pride Month and a year-round welcome to LGTBQIA+ people. It was burned down several months later, but the city of Long Beach rebuilt it – and so did Zwift, in the virtual world. 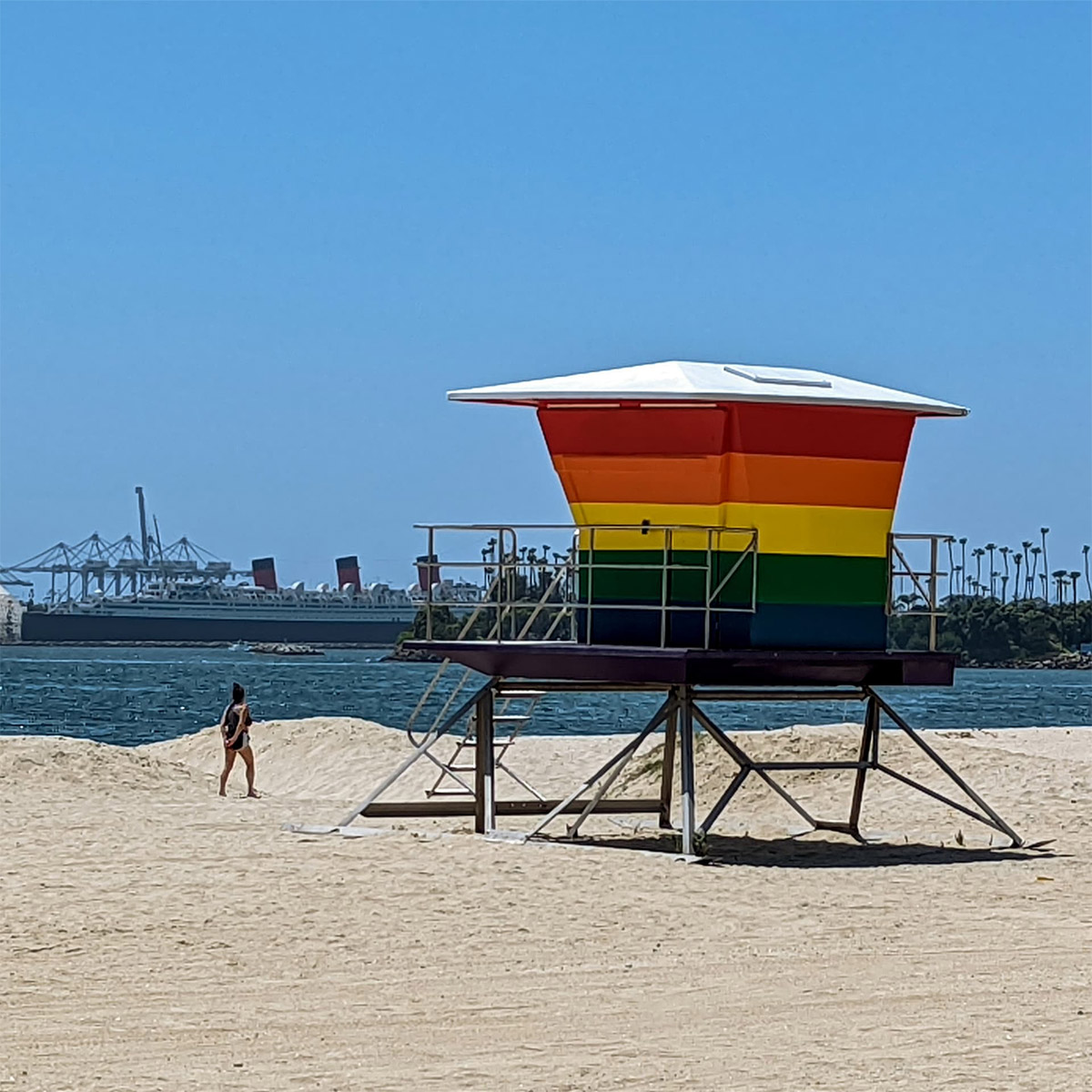 Zwifter Greg Rajkovic used to ride past the lifeguard tower on Long Beach. It didn’t sport rainbow colors at the time. He was sad to learn it had been burned after it was painted, but encouraged that it was rebuilt – both on that California beach and in Zwift!

Greg is asexual, meaning he is not sexually attracted to any gender. At the time he joined Zwift in 2016, he wasn’t open about that. But he joined Pride On events every year, and in 2021 he found out that the rides needed more leaders.  He decided to use the opportunity to come out as asexual, and offered to lead some rides as a member of the LGTBQ+ community. He says it means a lot to have a community like that on Zwift, along with the official Pride On rides and runs. 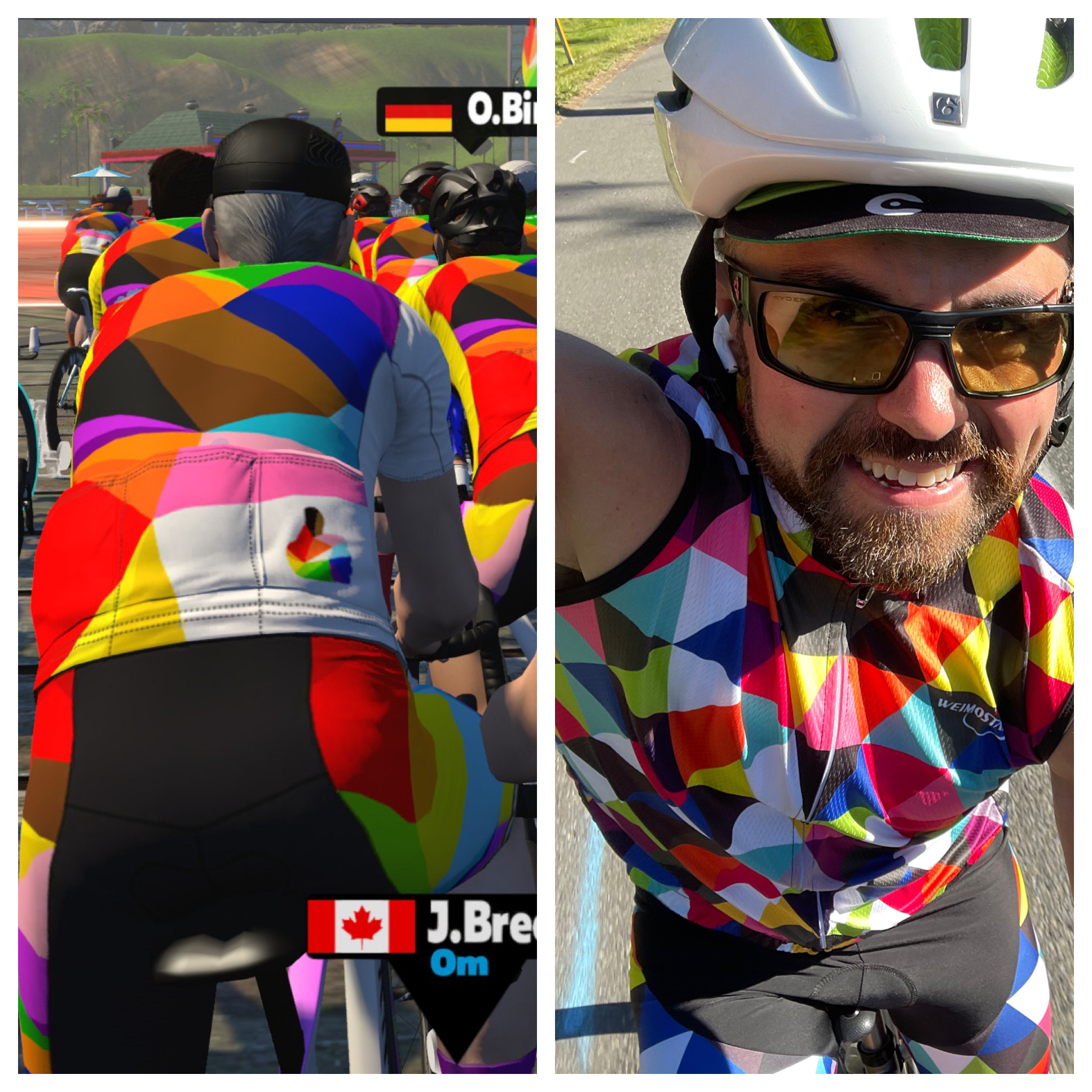 Greg on Zwift and IRL

“The presence of a permanent rainbow lifeguard tower means... that people can see that standing for acceptance, which is what the community is all about within Zwift, is really what matters the most,” Greg says. There is still a long way to go and still work to do, he says. But it’s encouraging to see growing acceptance. 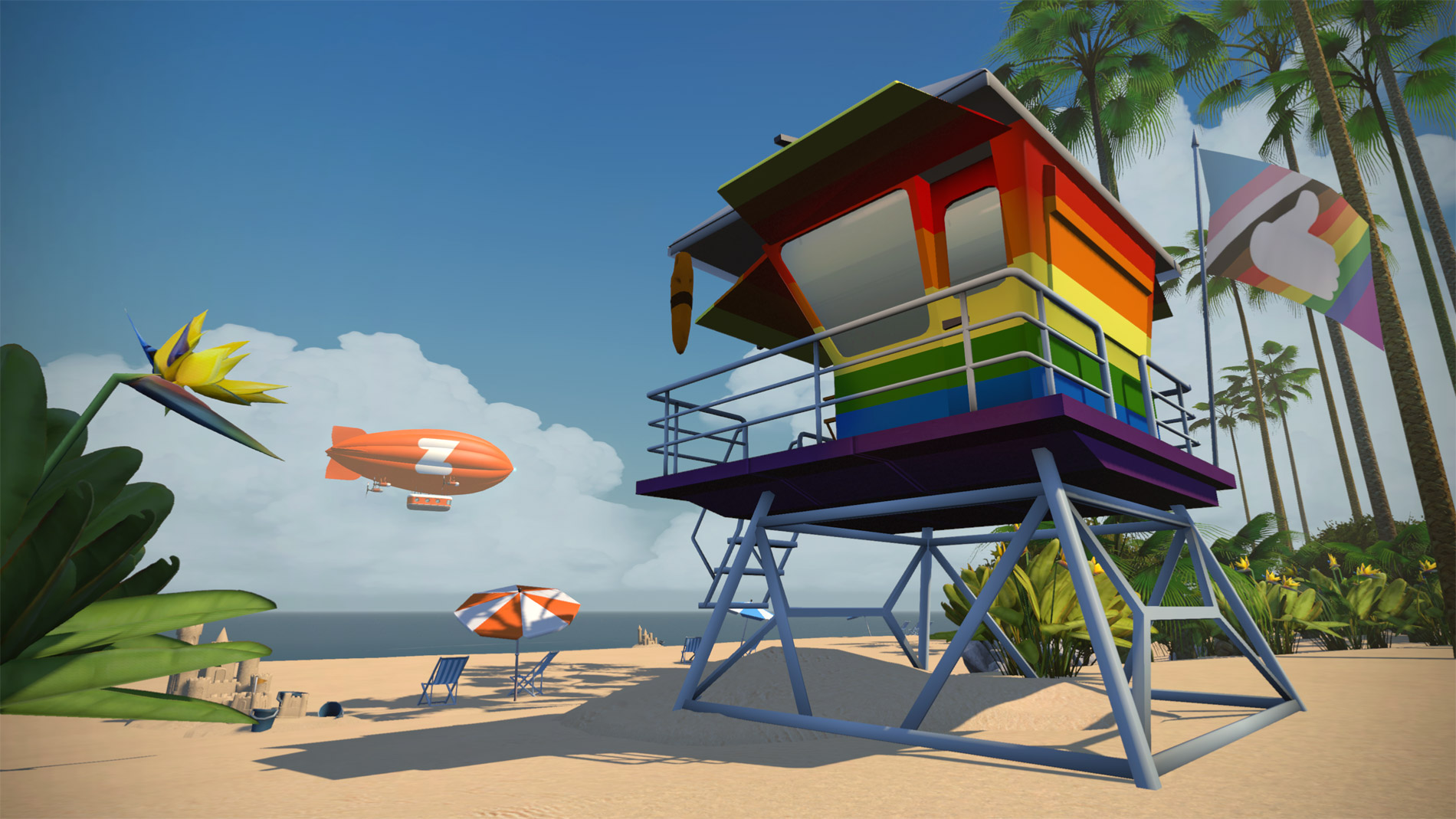 Zwift brought the tower to Watopia in June 2021 for its “Pride On” events. And starting May 2022, the rainbow tower is visible to everyone who rides on Watopia at any time! This permanence is important, says Clare Taylor. She joined the LGBTQ+ Zwift Community on Facebook after she began Zwifting in January 2021 and says:

“I think LGBTQ+ visibility outside of specific events is important - it's a signal that we are acknowledged and welcome on Zwift, and I think it also says something about Zwift's values that you think it's important too. People may think it's a small thing, but it becoming a permanent addition, along with Pride rides that continue all-year round are a big deal for the community. How many companies/organisations go all rainbow for Pride month and then switch straight back on 1 July? While we may have appreciated that a few years ago, the community now sees that kind of behaviour as tokenism. We want to see meaningful commitment to inclusion through an organisation's actions all year round. LGBTQ+ people don't go and get back in a box at the end of June.” 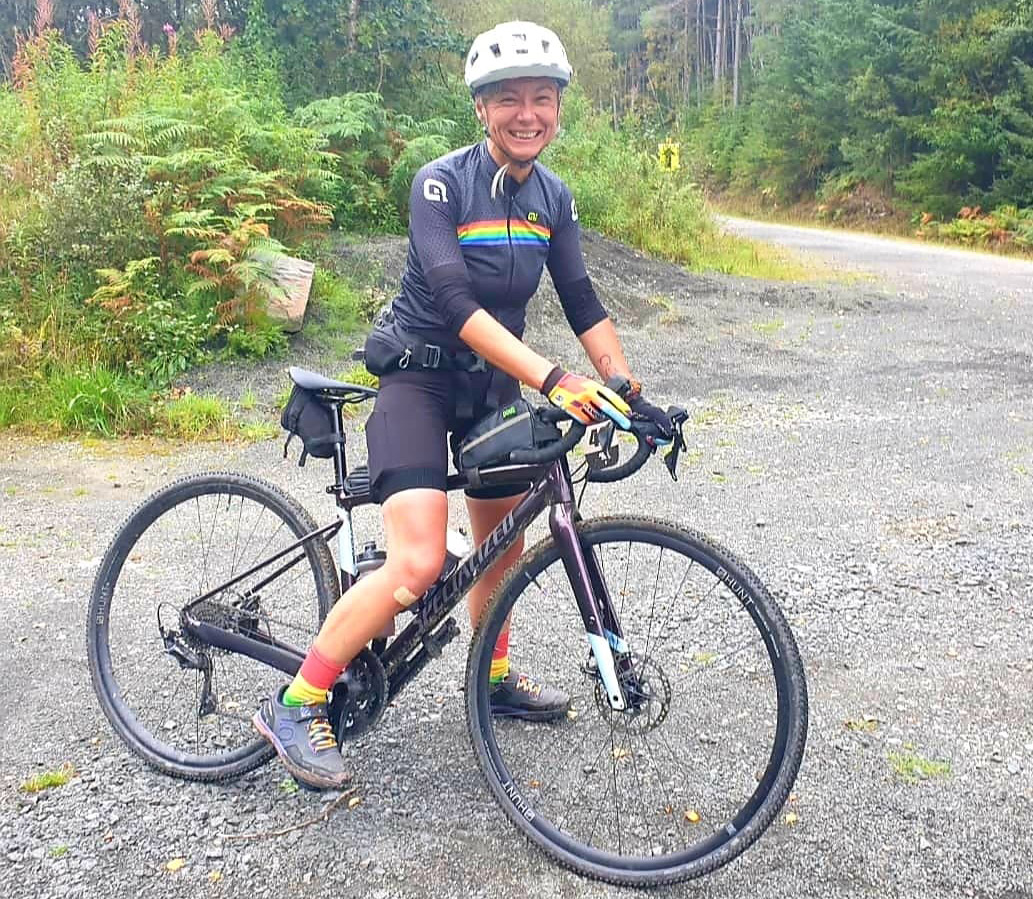 Clare on a gravel ride

One Belgian cyclist says she noticed Zwift’s rainbow lifeguard tower during Pride Month last year, but she didn’t know about the real-life version.

“I was appalled about the fire… so terrible that it still happens, but then again super charmed by all the support that came in,” says Fran Bambust. “The new tower thus became a symbol of how LGBT support and acceptance is here to stay. We are part of the community now.”

Fran, who is transgender, joined Zwift in 2017 and began using it more frequently during Zwift Academy in 2018. She was a ride leader for some of the early “Pride On” events, and still leads rides from time to time.

“You know, in an avatar world it could be easy to belong… since you are actually stripped of everything that sets you apart. You could be as grey as you want to be, be as ‘normal’ as anybody else. Nobody would know if you are a trans person if you don’t tell it. Yet, you don’t feel whole if you leave it out… The support that Zwift gives us, black, Asian, LGBTQ+, women… makes it a safer environment to show our defining elements, the things that set us apart in the real world but don’t matter in Zwift, that don’t hinder us to belong.” 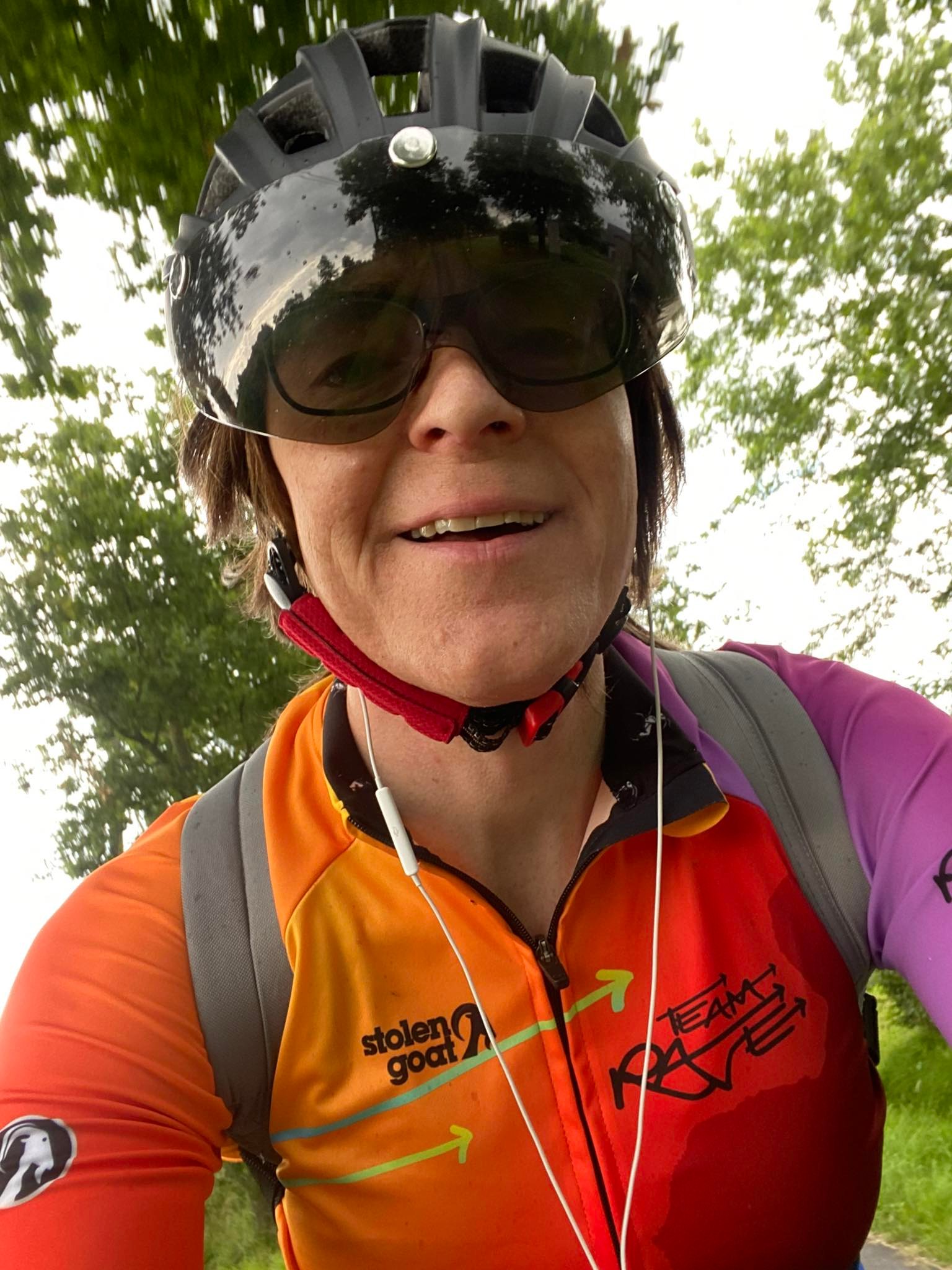 In a world that doesn’t always offer acceptance and inclusion, Zwift wants to welcome athletes of all stripes. The lifeguard tower is a symbol showing that everyone deserves a place where they belong. But it’s more than that. As Fran said, it’s also about letting people embrace and express who they really are!

Hanna Grace has been on Zwift almost since it was created, but it was just a training tool for her at the beginning. A cycling instructor and coach in Washington, DC, she’s found friends on Zwift who have been very supportive. “I began letting my guard down late last year and allowed some to know of my gender issues,” says Hanna, who is transgender. “My close circle has been very supportive. A few have actually been incredibly kind and life-changing to me... I have found another channel of inclusion in the Pride rides.”

Hanna likes to keep a low profile and keep her personal life private, but she is proud of who she is. She always rides with her Pride kit on Zwift.

She says she was hurt when she learned of the lifeguard tower being burned but touched that it was rebuilt, both on Long Beach and now in Watopia.

“I think it is a fantastic idea,” Hanna says. “I continue to hope for a world of tolerance and acceptance of diversity of all kinds.”

Zwift How-To: Best Practices For Club Owners about 1 month ago