The climbs in the final round of the men’s KISS Super League tested the racers’ limits. Could anyone break away, or would the winner come from a big group sprint?

Racers this week rode a little over 30 kilometers on two laps of Zwift’s London Loop route. First, there’s some gently rolling terrain in the city of London. Then, riders turn into the London Underground and emerge at the foot of Box Hill. This 3-kilometer hill has an average gradient of 4.4%. While it never gets very steep, there are flatter and steeper sections where racers can disrupt the pace of a climbing group. A short flat section at the top of the hill leads to a sharp kicker, before riders descend back to the London Underground. Then, they have just a few kilometers of flat and rolling roads before a slight uphill run-in to the finish. 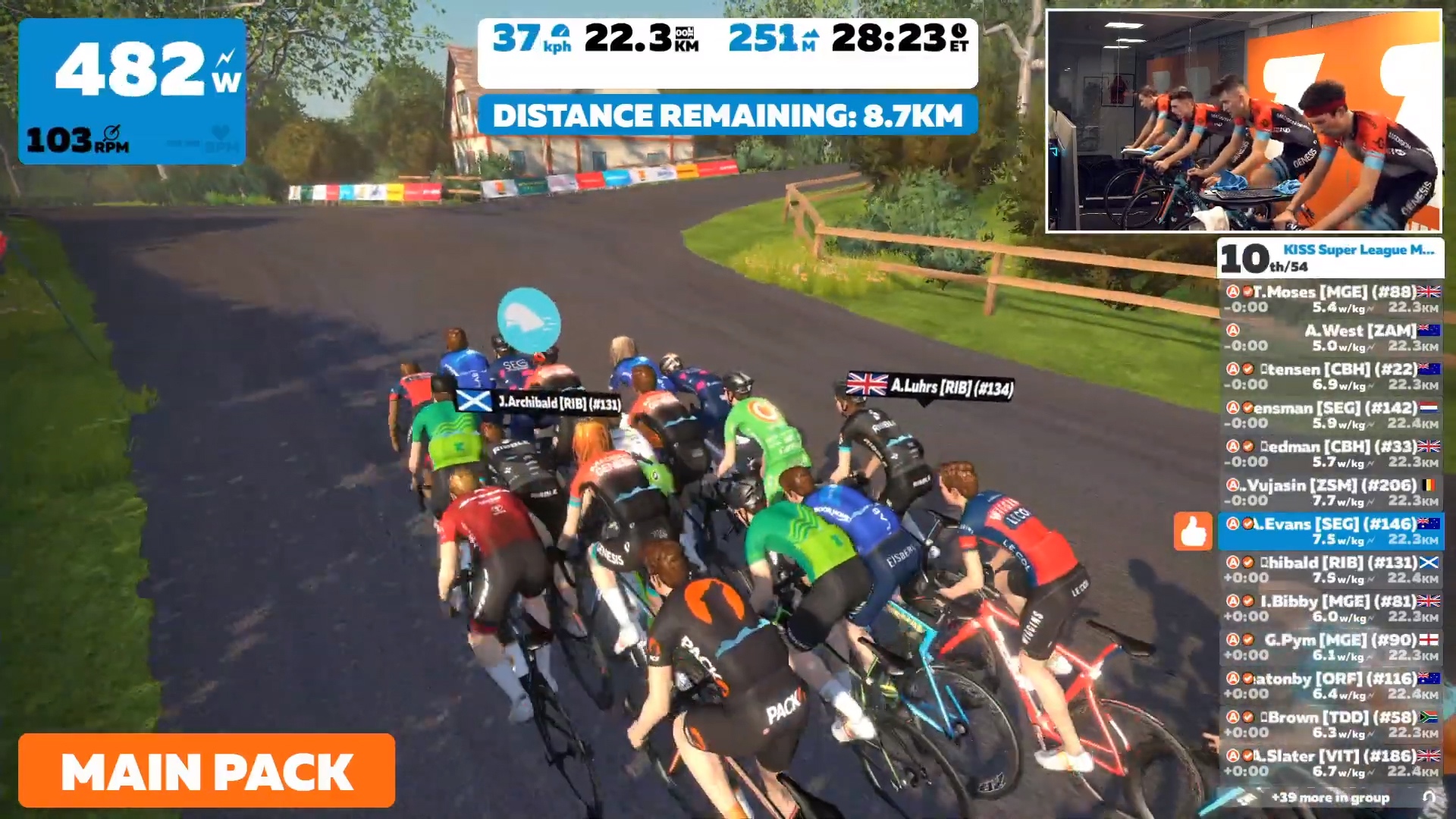 A couple of riders tested the waters with attacks on the flat or rolling roads. Mark Donovan (Team Wiggins – Le Col) was one of them, but it didn’t last long.

He decided to try again once they started up Box Hill, and this time he got a gap on the rest of the group. Teammate Jacques Sauvagnargues bridged over to him. The two maintained a lead of a couple seconds until about halfway up the hill, when the hard-working peloton caught them. Further down, the group was splitting up.

Just as they reached the top, Lionel Vujasin (Zwift All Stars) and Mikey Mottram (Vitus Pro Cycling) rocketed off the front to sprint for the King of the Mountain (KOM) banner. The pack soon swarmed around them, leaving just 22 racers left in the leading group.

Between the two ascents of Box Hill, Ryan Christensen (Canyon dhb p/b Bloor Homes) launched a strong attack with about 13 kilometers to go. He pulled out a gap of 10 seconds on the rolling roads, but after a couple of kilometers the pack closed it down.

Then Box Hill loomed once again. At the bottom, Jesse Featonby (Oliver’s Real Food Racing) jumped away from the group with a lightweight feather PowerUp. Soon another rider came around him. Donovan had attacked again! The Wiggins – Le Col racer got a gap quickly and sustained it.

The peloton kept a steady, hard pace, but it wasn’t closing the gap to Donavan. Alex Luhrs (Ribble Pro Cycling) shot out of the pack with his own feather PowerUp and tried to bridge to the leader.

That got the group’s attention. Alex West (Zwift Academy Dream Team) ramped up the chase. Meanwhile, Luhrs reached Donovan’s wheel and rode straight past him. Luhrs was speeding to the banner with a 7-second lead when the pack crested the hill. The group finally caught him as they stormed up the steep kicker before the descent. 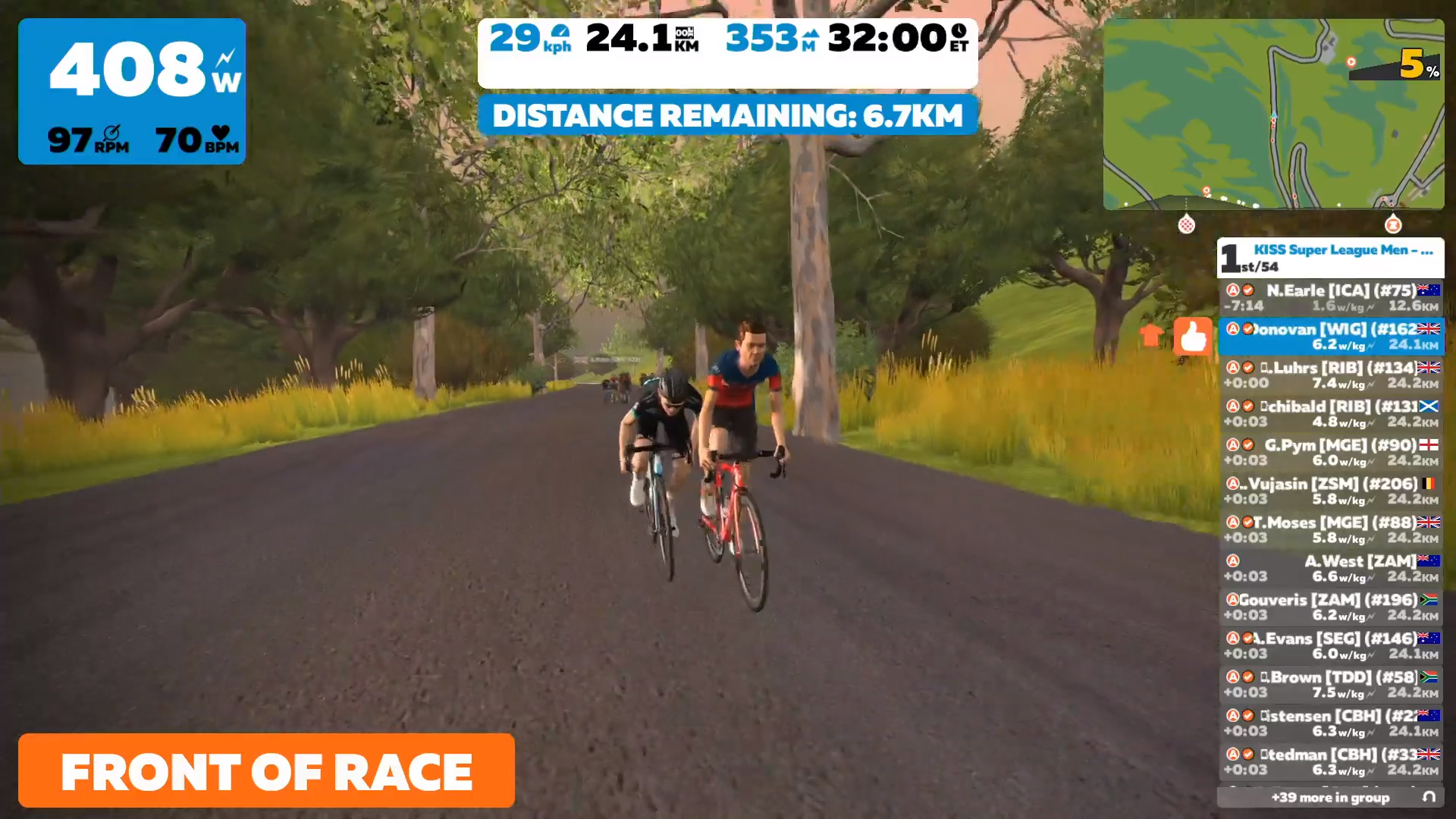 There were still 18 riders left in the front group. Surprisingly, it looked like this hilly race would end in a bunch sprint.

Madison Genesis’ Tom Moses had other plans. With just 1.5 kilometers to go, he made a break for it on a flat stretch of road. Mathieu Drujon (Zwift All Stars) used an aero PowerUp to get clear and bridge up to him. He then slingshotted around Moses and went for the finish line! But Drujon couldn’t get enough of a gap to fend off the charging sprinters.

As they came around, West took the lead. Then Vujasin. Then Jon Mould (Madison Genesis). In the end, it was Brad Gouveris (Zwift Academy Dream Team) who got the timing just right to win the round. This is Gouveris’ first league win and his team’s second. 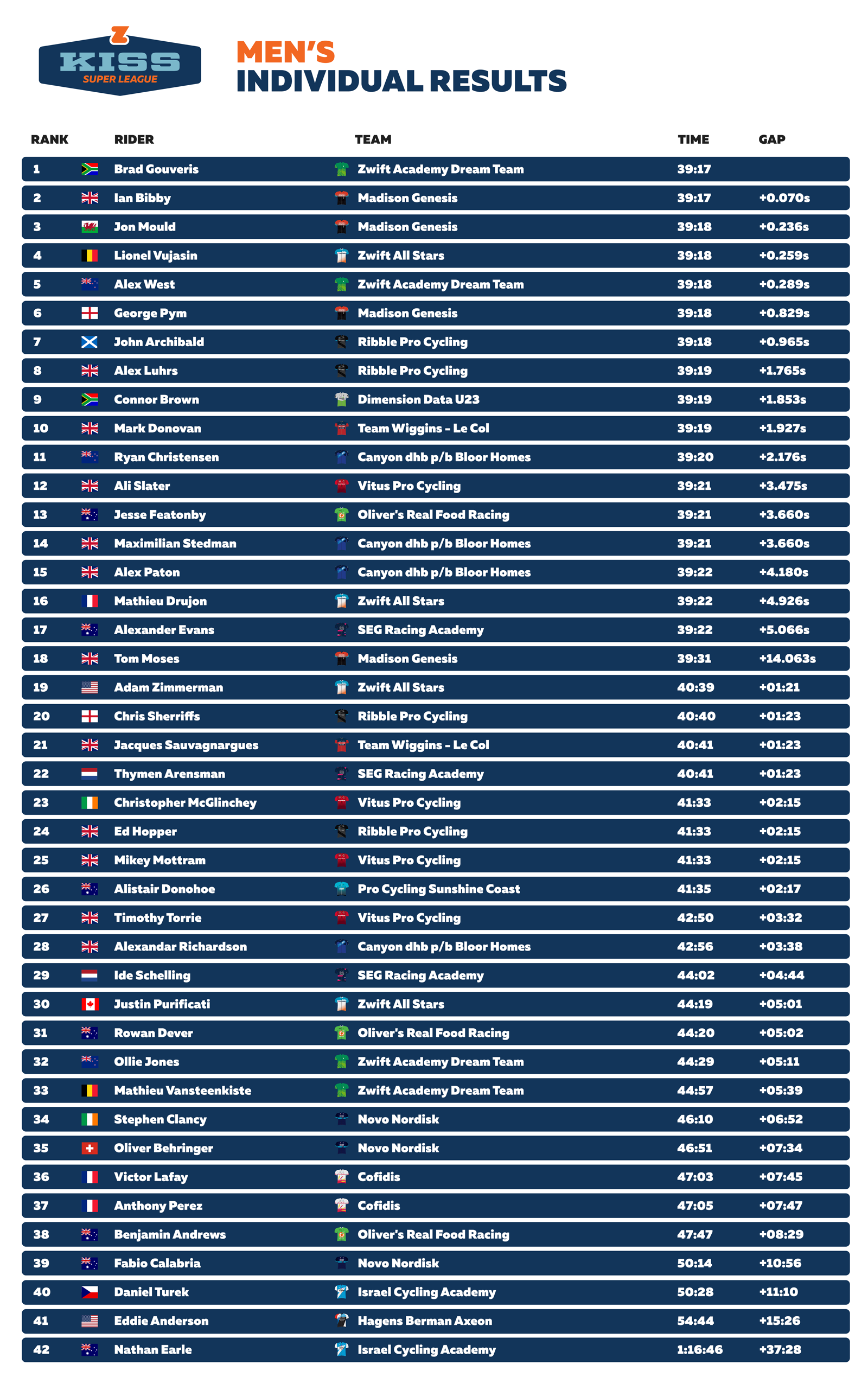 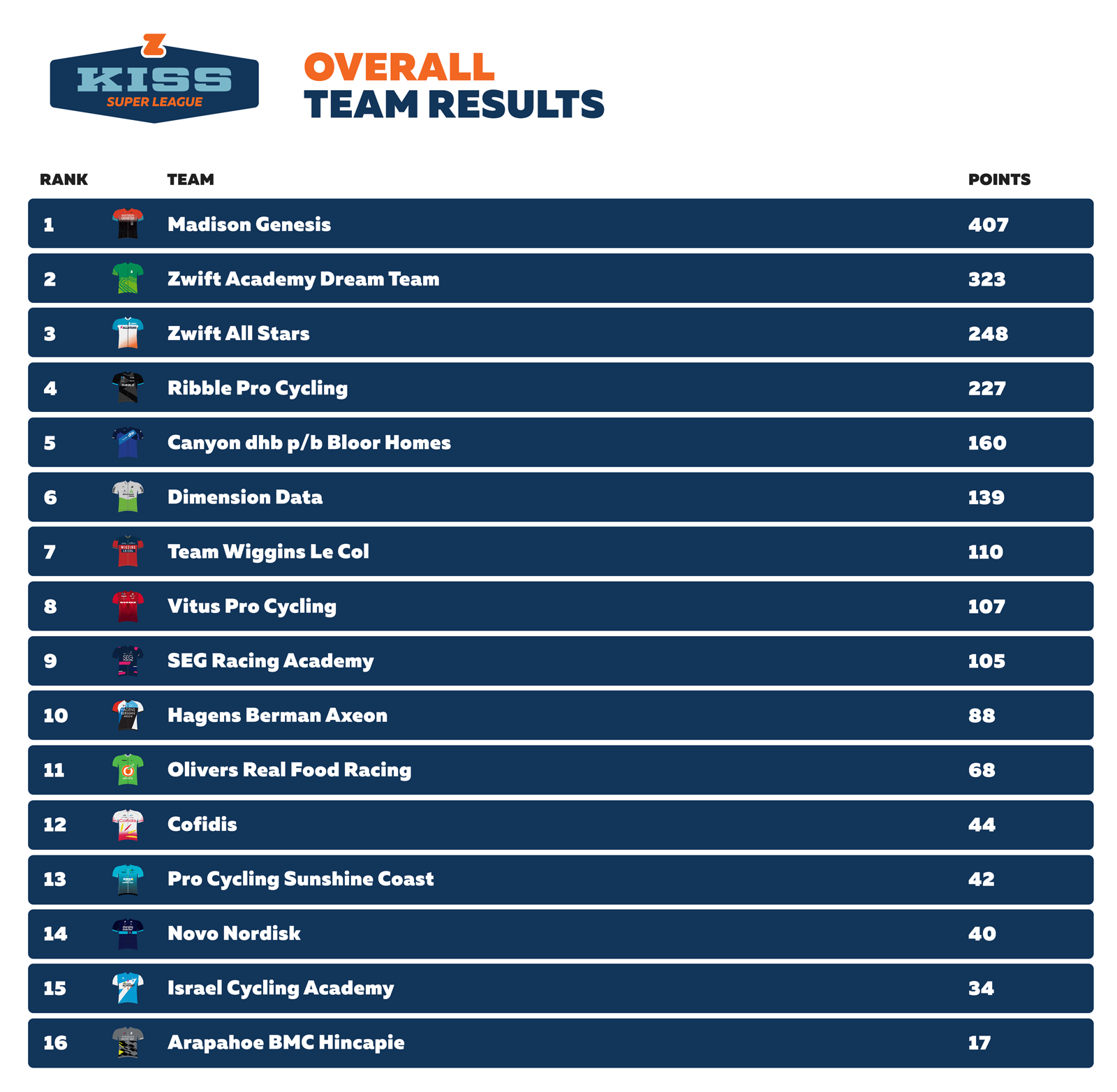 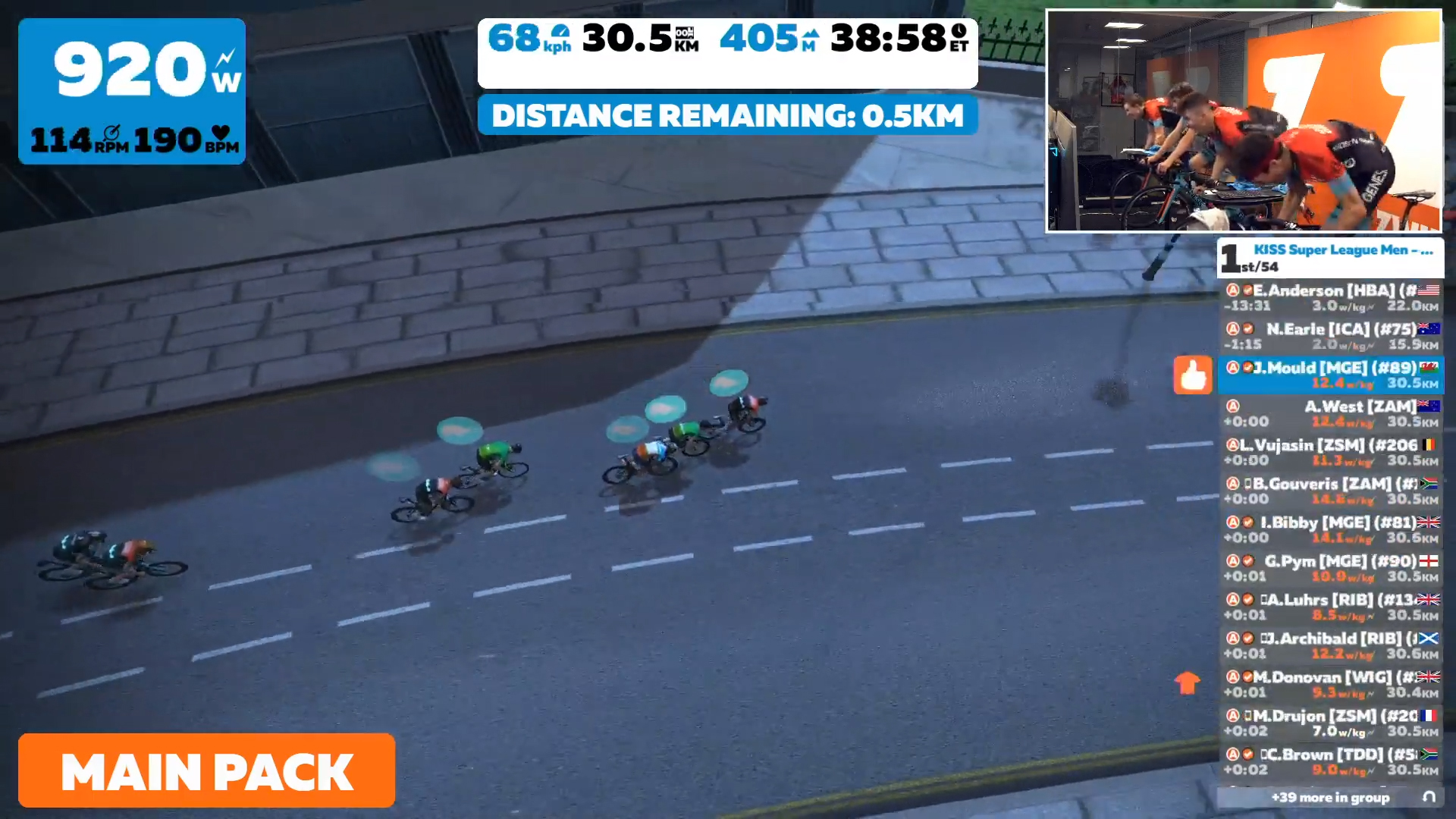 Throughout the league, participating teams earned points based on their riders’ positions in the race. Each team’s best-scoring 8 out of 10 races were tallied up in the final ranking.

Madison Genesis earned the top spot in the team competition in Round One. Since then, the team has never let go of it. They had both the strength of professional cyclists and the experience of seasoned Zwift racers on their side, and it showed.

The Ribble Pro Cycling racers proved to be quick learners. By the end of the league, they got close to the podium, but they didn’t quite manage to overtake the Zwift All Stars for third place. The Zwift Academy Dream Team took second place, putting both community teams on the overall podium.

The Madison Genesis riders raced side-by-side this week at the Zwift office in London. Bibby said this gave them a chance to talk tactics during the race.

“I got a PowerUp, so I was happy to wait for the sprint,” he said. “Mould had one and George (Pym) had one, so for us there wasn’t much point in attacking apart from Tom (Moses). . . and it sort of worked. Even if he didn’t stay away, it let us sit there and let someone else do the work.”

“It’s made winter finish off nicely, and we’re straight into the race season now,” Mould said. “You know you’ve got a hard effort every Wednesday, so you just factor it into your training and make sure it fits around that. It’s been really good fun.”

Gouveris said he is “absolutely elated” to win the final round of the KISS Super League.

“It was a really tough race. I knew the climbs weren’t in my favour,” Gouveris said. “I knew that if I had made it over the climb, I was in with the chance at being a contender for the sprint.”

“In all honesty I had no idea what to expect when I started the Super League, but it has been a fantastic journey and it has been an absolute honor to race against the top Zwift riders.”

When he followed Moses’ attack late in the race, Drujon said he thought he might be able to win. But he knew it was over when the sprinting started. He said he’s enjoyed the league overall.

“It was a great experience, a big honor to be a part of such an event!” he said. “For me it was more fun at the beginning, with all the pros who didn’t know how to manage the game, but after they learned from their mistakes it was harder for us. But very proud to finish on the podium with my awesome team (Zwift All Stars)!” 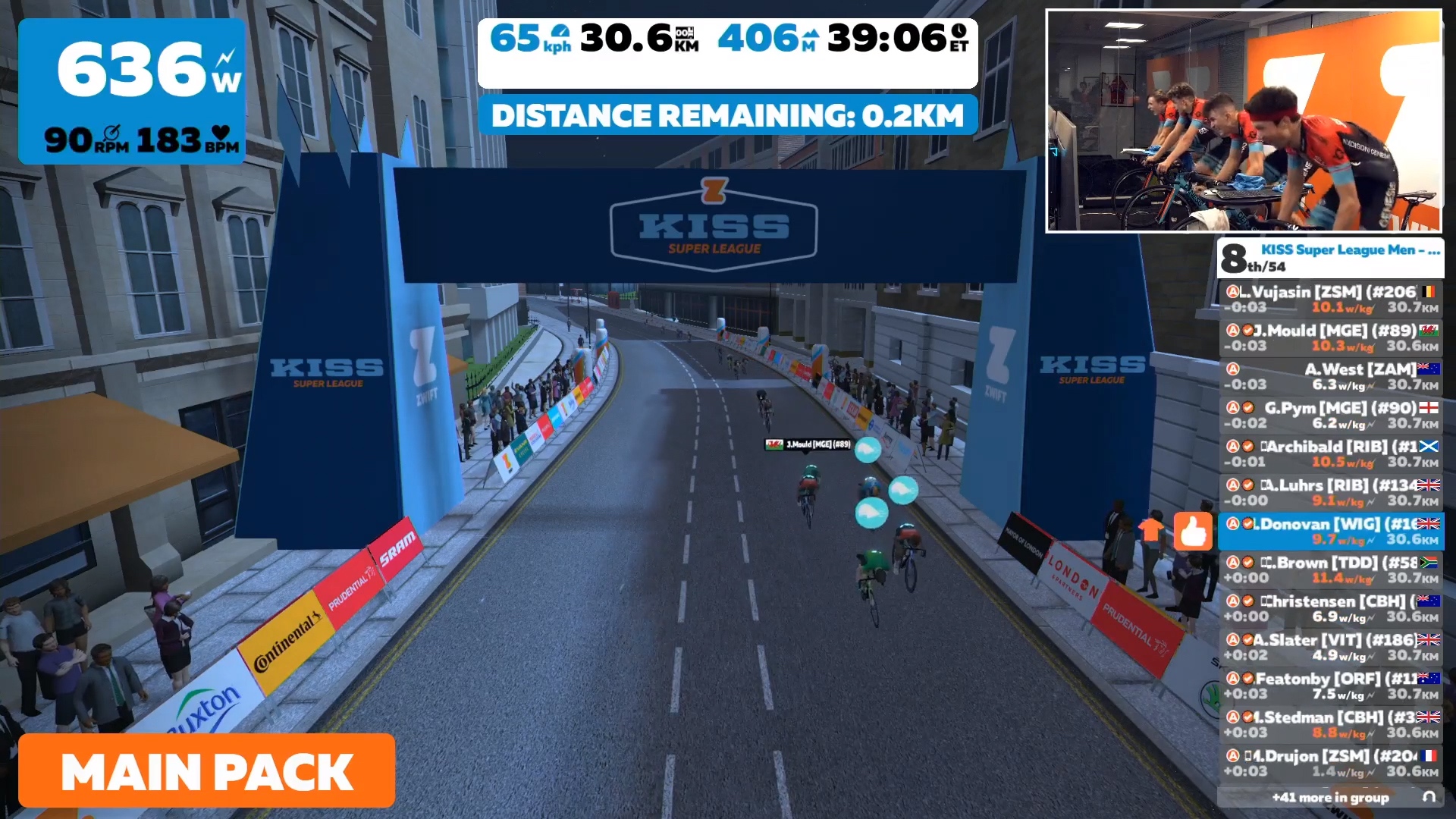 The men may have finished, but the KISS Super League is not over yet! Tune in live to see the women’s races continue. Starting next week, race times will change back to their original schedule in the U.S. due to Daylight Saving Time.