Tim Grose, live streamer, group run leader and level 21 zwifter with 833+ miles and counting on Zwift. Tim leads run sessions on both MRC and WOW and has started doing some product reviews on his Facebook page

Tim runs the UK running results and rankings sites Power of 10 and runbritainrankings.com along with his day job as an IT Consultant for CGI. Some people may also know Tim as a serial CR chaser on Strava with 53 pages of them! 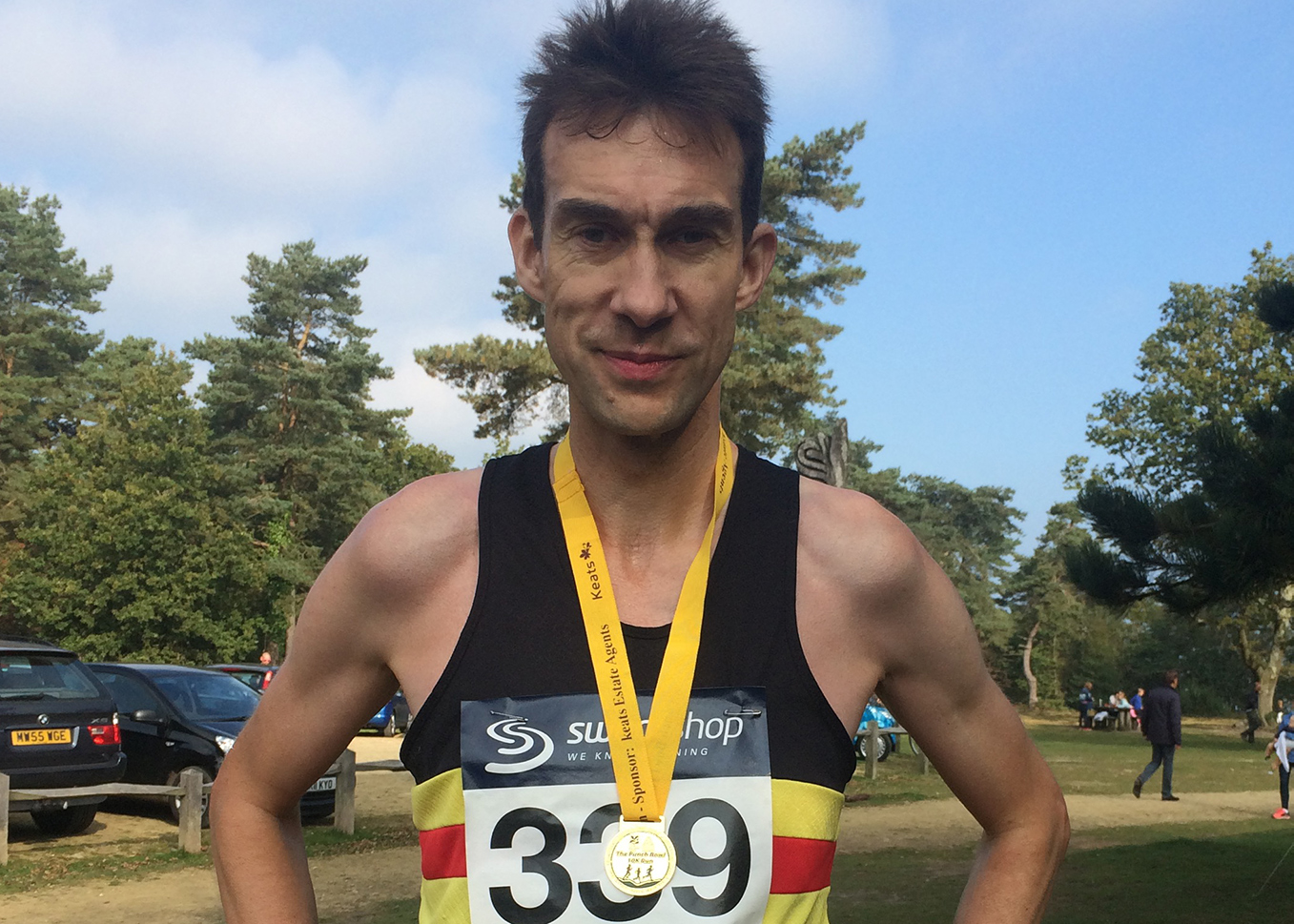 1. What is your running background?
I always ran a bit from my early school days doing the odd track and cross country race but started taking it more seriously in 1983 aged 16 when joined a local athletics club. Middle distance (800 and 1500) on the track was always my thing and did that to county level (PBs of 1:55 and 3:55). Longer distances I found harder but proud of a 2:33 marathon PB. Am a bit slower these days but still very keen and Zwift has renewed my enthusiasm for running.

2. How long have you been competitively running?
Too long! As mentioned, I started training regularly in 1983 but my first recorded race on Power of 10 was in 1978 aged 11 in the district schools 800 on a grass track. I do vaguely remember it – started towards the back and worked my way up to 6th but it seemed an awful long way back then. I have done at least one race every year since and have done over 1000 races now.

3. Who’s your all time favorite runner?
Seb Coe. I started running in the Coe-Ovett era when their every race and often world record was big news and seemingly everybody that ran then wanted to be a middle distance runner. Seeing him in full flight kicking away from the world’s best of the time was always something you wished you could do. I raced him once in a heat of the Middlesex county 800 champs. I tell everybody that I was ahead of him for a bit!

4. What’s your dream race?
Easing away from a top class field to win a mile in a new PB of 3:59.4! Never happened but see later on. 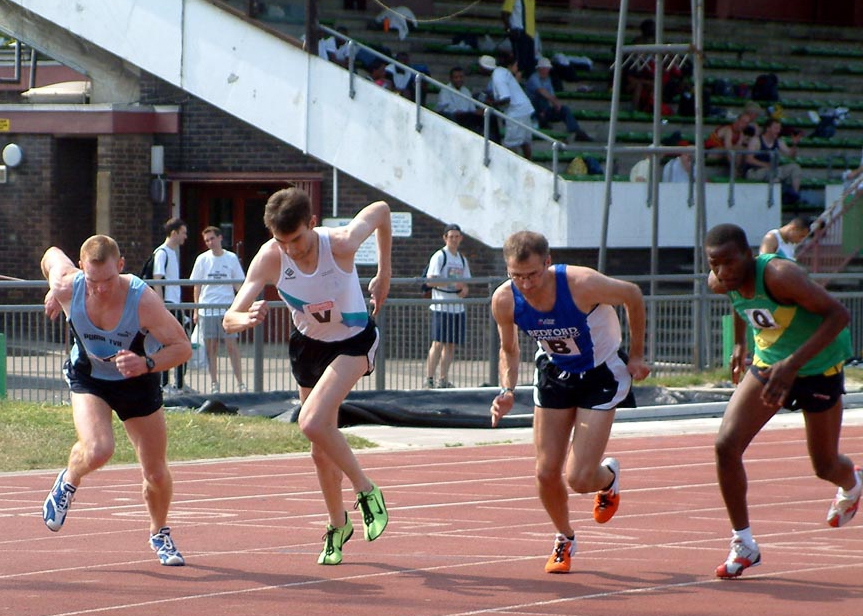 5. Best advice for a new runner to Zwift?
Join one of our flagship group run events and experience running with others just like they were really there next to you. Treadmill running will never be boring again.

6. Biggest running achievement?
Have won a few county medals of all colours at distances from 800 to 10000 but probably my best win was when I won an invitational mile track in my PB of 4:16 holding off the field with a 60 second last lap. I won by far my biggest cash prize - £50! However in 1992 as a poor PhD student it kept me fed and watered for a few weeks! Or did I buy another pair of shoes…

7. Favorite post-race meal?
Races are a good excuse (if you really need one) for more cake aren’t they! Do like a nice curry and washed down with ice cream too. Not very “pro” is it!

8. Favorite running shoe?
That is an eternal search because as soon as you find one, shoe companies discontinue it! I open my car and about different 10 pairs look up at me and more elsewhere. Recently gone back to Nike again after long spells in adidas and New Balance. Often use the Pegasus Turbo on Zwift of late as very soft but feel fairly fast.

Raced in adidas Adios for years but now looking for a replacement as the latest one is too small for my UK 13 feet! Just got a pair of the Nike Vaporfly 4% off eBay for a small fortune so keen to try them.

9. Longest run on Zwift?
I have got my half marathon achievement badge when it was raining really hard one Sunday last winter and Zwift seemed the best bet! Perhaps will want to try for longer one day when we get more levels! 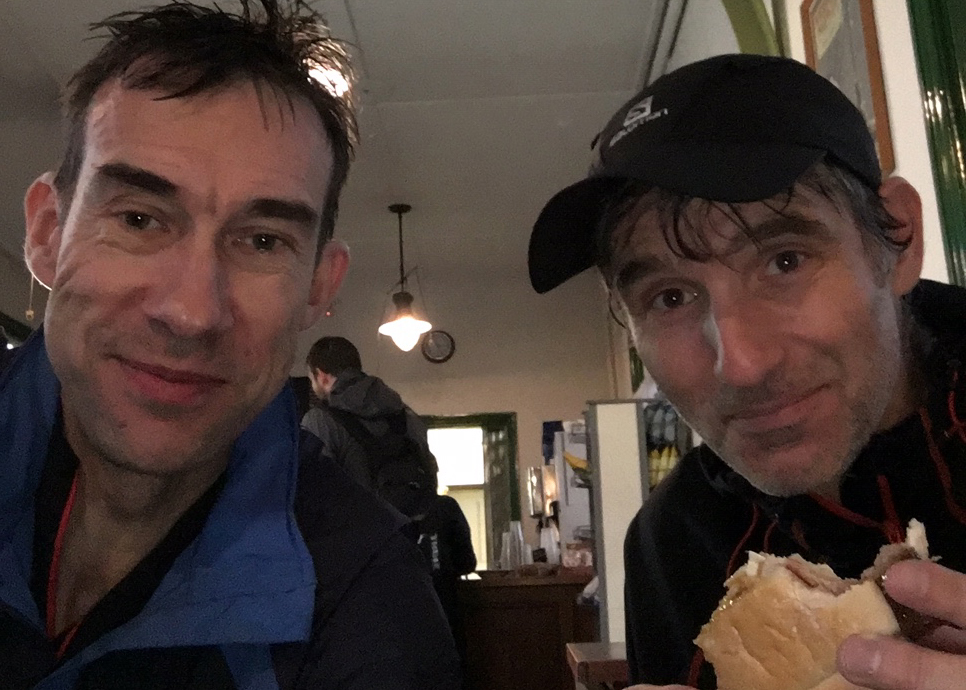 10. MRC / WOW / or SRP?
Well almost exactly a year ago now I asked Zwift if we could have a social recovery type run on a Monday evening and an interval session on Wednesday so I would have something to do. These quickly became known as MRC and WOW and I soon found was designing all the sessions, looking for other times to hold the events, recruiting run leaders and of course leading the runs. Zwift now do most of the admin work but am very much still involved. I do like a challenging interval session but think would have to say MRC as to me it best demonstrates what Zwift is about – you can run steady on a treadmill with your friends (and many on Zwift have really become so) and 10K or so goes really quickly. Pre Zwift 10 mins on a treadmill seemed a long time!

11. Favorite distance to compete? Why?
At aged 52 now I am somewhat slower than I was but still my favourite distance is 1500 on the track or a road mile. To me, the distance is best blend of speed and endurance and usually you can actually feel are really racing it. 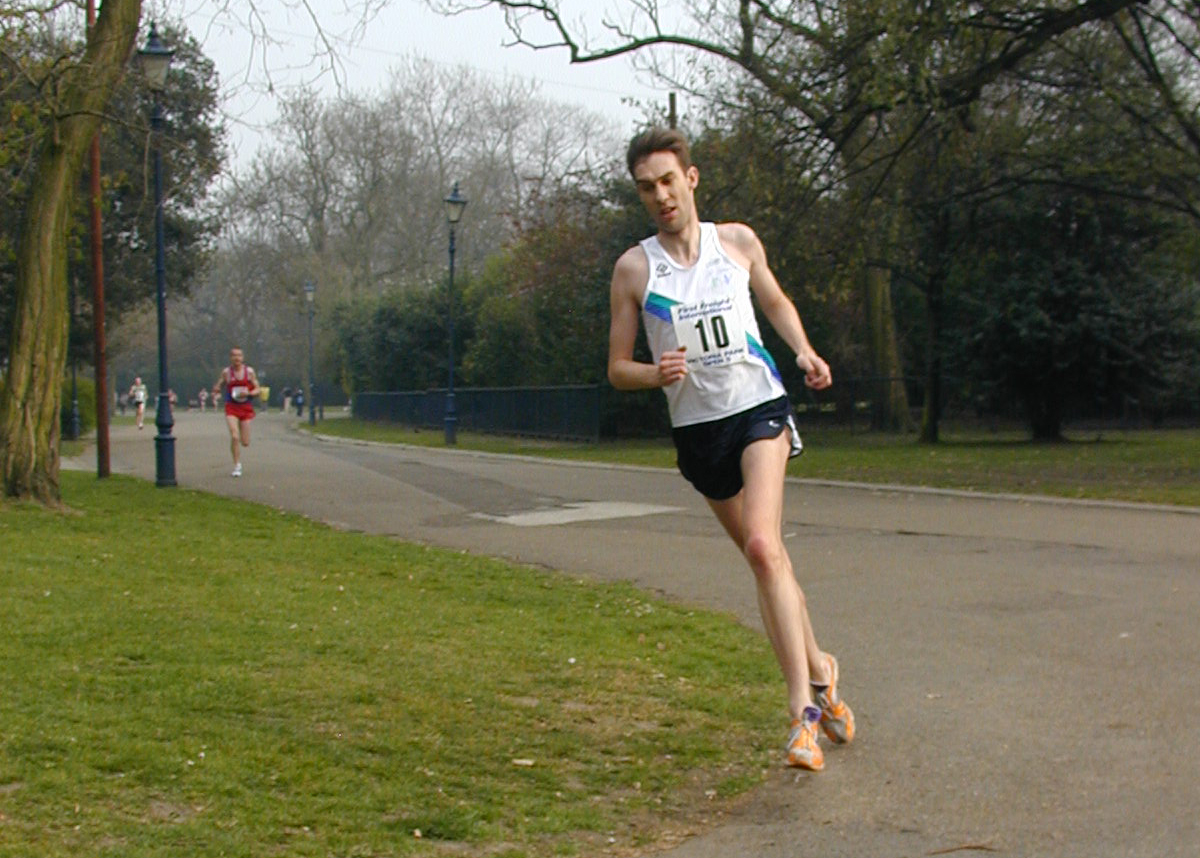 12. When you aren’t running, what are you doing?
Perhaps thinking when, where and what my next run should be! Away from the day job, spend a lot of time on my websites. If you have raced in the UK but can’t see yourself, please let me know! Think of it as ZADA for running.

13. What’s your ideal Zwift setup?
Getting close to it now with a “smart” treadmill (MYRUN) and Neo next to it (I do ride too and even do some IRL time trials and the odd duathlon) in a purpose built “cabin” in my back garden. Think could do with a new Zwift PC as my one is old and slow and need some more screens too! Another ambition is to get a 2nd treadmill so can literally run with a friend on Zwift. 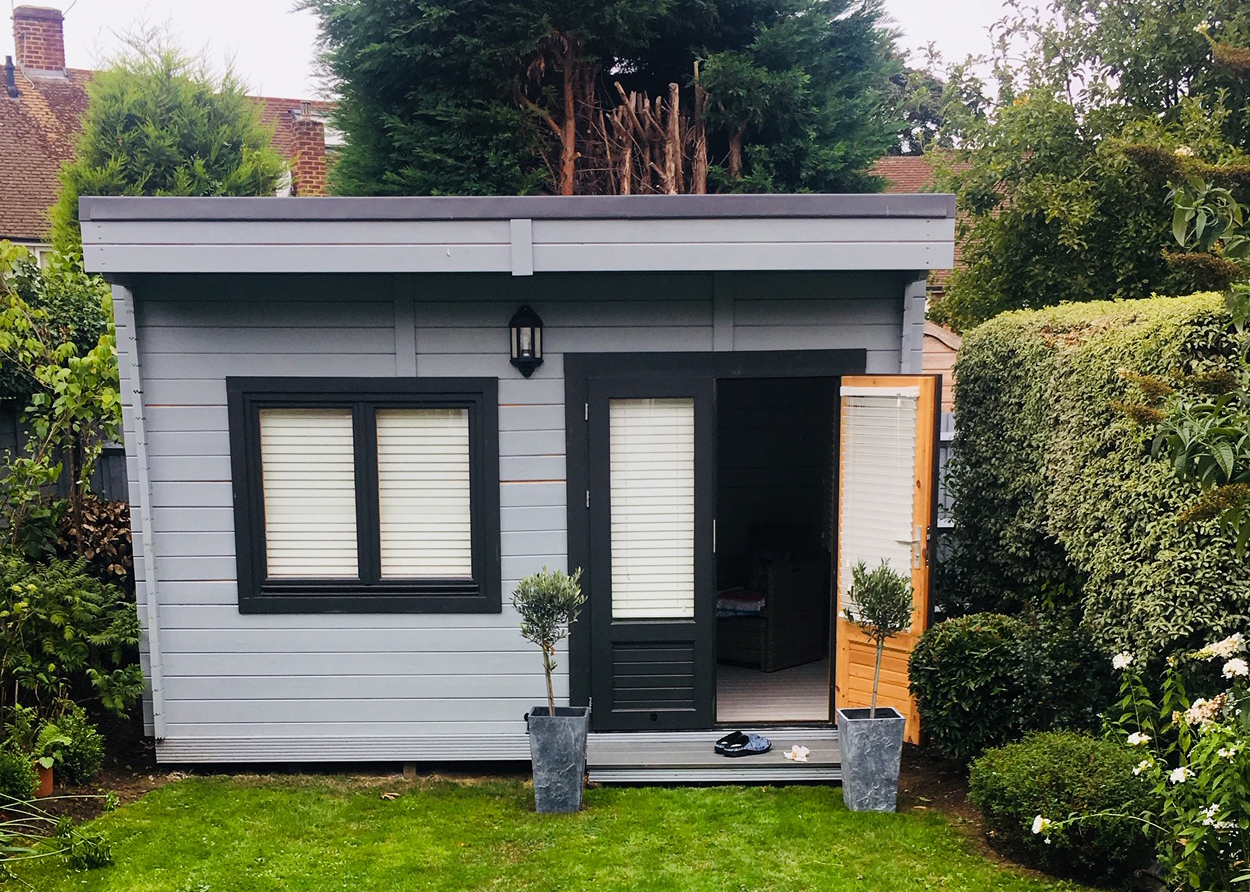 14. Favorite type of running workout? Intervals, tempo long run, etc…?
10x400 with 1 minute recovery is probably my favourite session. We did it in WOW just this week. The intervals are long enough to get going but short enough that you can run them fast. Back in the day my best average 400 was 64 (22.5 kph). The other day I got to 20 kph briefly and I really thought was “flying”. Clearly not!

15. What’s your opinion on the new run only routes?
I like them. Can we have more please? In a way I find the best thing is that it is so much easier to see where other runners are. However, as in real life, I like to run in different places so after a few miles round the run loop, also nice to take on the riders say up Box Hill and the Alpe. They don’t like us overtaking them do they! 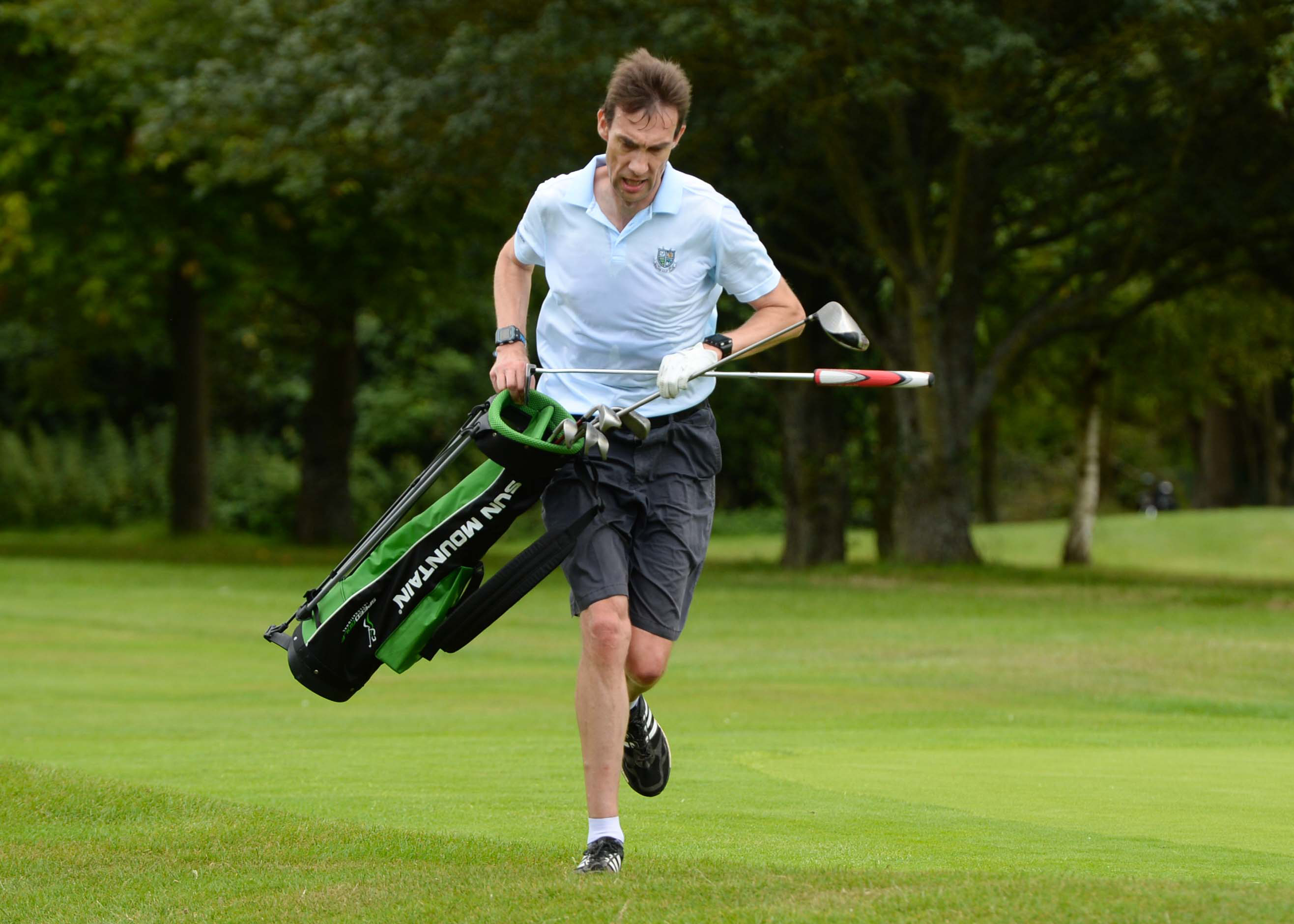 16. How did you get into Speed Golf?
I am a golf club member and currently play off 12. Might be less if played more as given a choice running usually wins. I heard that there was British champs a few years ago with a Novice category so seemed a great way to combine two passions. I won that category shooting 92 on a full size course in 53 mins. I played it “normally” a few weeks before in 4 hours but only 4 shots less. Sport is a great leveller though as the best speed golfers usually take less than 70 shots in less than 40 mins.

17. What’s your favorite part about live streaming?
Probably all the tech that goes with it. I am naturally a bit shy and can’t say I am a natural like Stephen but if a single person makes a positive comment (often either my wife or Mum but also the odd actual Zwifter!) then it does have some satisfaction. I am trying to get up to 100 Facebook followers (about 16 more to “persuade”) to become a “level up” (ring a bell?) game streamer! Strangely talking to yourself through a run helps to make the time go quicker and just recording the run is a great way to review what happened.

18. What about running interests you the most?
Ask my wife and she will say I am miserable if I can’t run. I am still very competitive and like to be the best I can even if that seems somewhat slow these days. Been struggling with injuries for the past few years so now I much more appreciate being able to run full stop and indeed without pain. I do also like all the tech – be it exploring everything about Zwift, my websites, Garmin GPS watches (usually always wear two!), Strava stalking, devouring YouTube videos and training articles and generally helping others on the Zwift and Garmin forums and groups.

Run with Tim at MRC or WOW