Zwifter Spotlight: The Sky’s The Limit

Before last winter, Mark Cutter didn’t own a road bike.

Cutter, 36, didn’t know what he was getting into when he signed up for the Police Unity Tour in February 2018. The multi-day ride is a fundraiser for the National Law Enforcement Memorial and surviving family members of fallen law enforcement officers. Cutter’s city government co-workers in Fort Collins, Colorado, convinced him to join them for a good cause.

As part of Team Colorado, Cutter would ride 253 miles in three days, from New Jersey to Washington, D.C. The longest day would be 107 miles.

So far, Cutter’s longest day on his mountain bike was a couple miles to the closest gas station and back.

“I realized I had no road bike experience and knew I couldn’t just show up and ride,” he says. “I needed to take this seriously and train hard.” 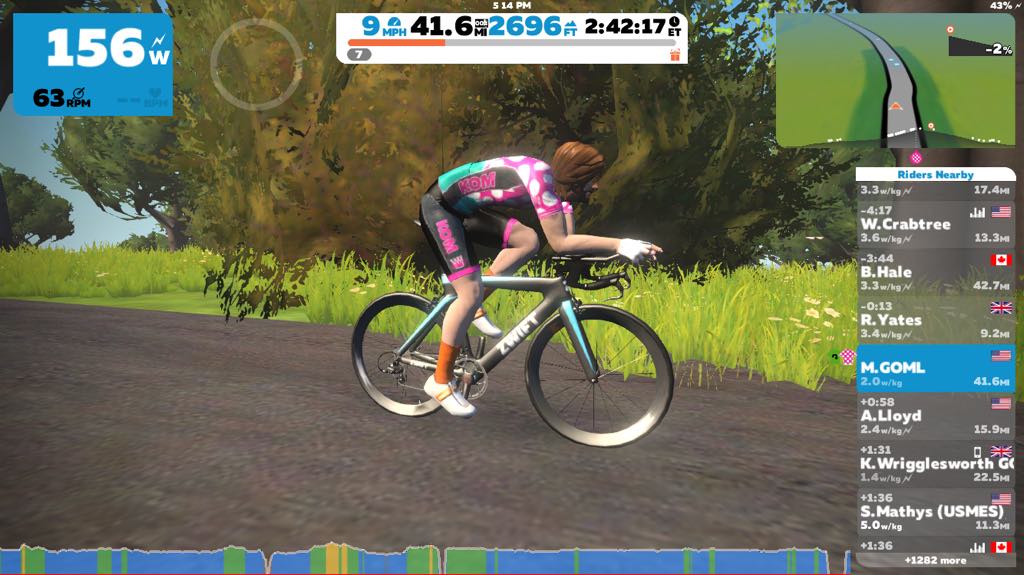 Faced with the unknown, Cutter turned to the Internet. He researched road bikes and ordered one from the local bike shop. He devoured videos by GCN and others on YouTube, hungry for as many tips on training, nutrition, and road cycling as he could find.

Cutter and his wife, Kara, have two daughters, a 4-year-old and a 3-month-old. It was hard for Cutter to find time to get outside on his bike. When he did have time to ride, the harsh Colorado winter gave him second thoughts. Indoor training was his best option.

He found an inexpensive magnetic trainer, bought a speed and cadence sensor, and downloaded the Zwift iOS mobile app. Immediately, he noticed he was having a lot more fun than he expected.

“Zwift was interactive and kept it challenging and entertaining,” he says. “I wasn’t just spinning away staring at a wall.”

After a couple months riding indoors, Cutter got together with a few of his teammates for his first outdoor group ride.

He started out feeling nervous but grew more and more confident as he found himself beating his friends to the top of the hills. Excited and feeling strong, he decided to join a faster-paced group for another one of his early outdoor rides.

This time, it wasn’t the same.

Cutter didn’t dress warm enough for the cold weather, and the group was too fast for him. He struggled to keep up for a miserable 35 miles.

“We finished and everyone was ready to eat and celebrate,” Cutter says. “I was freezing, sore and just wanted to go home. I really was worried that I wouldn’t be able to complete further rides.”

But he wasn’t backing down from his goal.

Cutter continued his training on Zwift, where the weather couldn’t touch him and he could ride at his own speed. He mixed things up with workouts, group rides, and even some virtual races.

His older daughter would dress up in a “bike outfit” – black shorts and a T-shirt – to watch her dad and cheer him on with an enthusiastic “Ride on!”

Cutter’s confidence grew with support from his family and a few more outdoor rides. By May, it was time for the Police Unity Tour. Cutter was ready, and his training paid off.

“It was a great time. I was in great shape for it,” Cutter says. “I was really amazed how good I did with only a few outdoor rides. The rest was all Zwift rides!”

After getting a taste of how cycling could feel, he was craving more.

At a friend’s suggestion, Cutter rode in June to Estes Park, a small town at the entrance to Rocky Mountain National Park. The route included some challenging climbs in the mountains – mere “hills” to Colorado cyclists.

Cutter fought back doubts by setting small goals. If he could make it up the first incline onto flatter roads, he could take a break. Making it to the top would be a victory, no matter how long it took him to get there. His family gave him water along the way and met him at the park to celebrate.

“The ride was harder than expected,” Cutter says, “but I did it!” 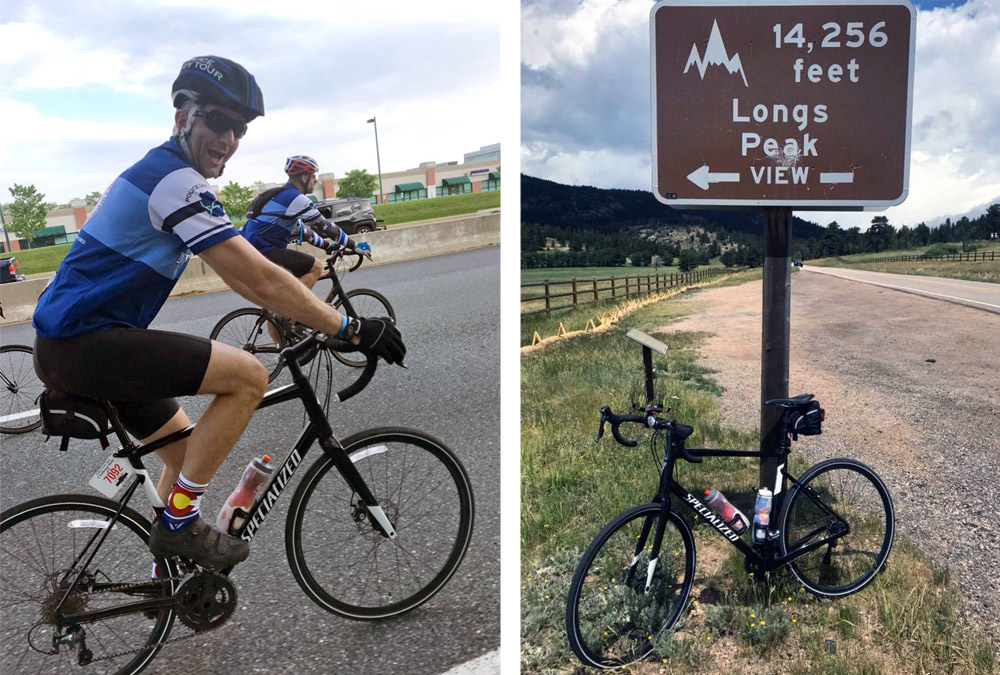 When Cutter got back from Estes Park, he shared his accomplishment in the Zwift Riders Facebook group, hoping to inspire other new riders to take on a challenge, too.

He says setting a goal can help you stay motivated, especially if you train with others who are working toward the same goal. Start by taking small steps and build slowly from there. Cutter’s first ride on the new bike was 5 miles.

“I liked all the goals in Zwift. Unlock this route, unlock this jersey, unlock this bike... small things,” he says. “The Great Wall of China was not built in one weekend. One brick at a time.”

You don’t need an expensive trainer or a new bicycle, Cutter says, but it can help to treat yourself to something that helps you feel pride in your gear, like a nice jersey or shorts.

It also helps to keep having fun.

When other riders pass him in Zwift, Cutter playfully chases them. “Oh you just passed me? No way.”

By August, Cutter decided to take on Mount Evans, climbing the highest paved road in the United States.

“Finishing the ride (to Estes Park) made me want to find the next bigger and better challenge on my bike,” he says.

The route Cutter chose is more than 14 miles long, and elevation at the summit is over 10,000 feet. The grade isn’t extreme, but it can feel much steeper when you’re riding on tired legs and breathing thin air. He climbed at a steady pace and took the ride in small pieces at a time.

A mountain goat perched on the rocky landscape made him smile. It reminded him of the ibex at the top of a mountain in Zwift. When he reached the summit, he marveled at how far he had come.

“I know I’ll never be a Zwift pro or on Team Sky, but it’s been a blast seeing what rides I’ve accomplished in less than a year,” Cutter says.

Cutter is working on goals for next year, but right now, he’s focused on helping someone else reach hers. His wife is planning to join him in next year’s Unity Tour. Kara has been using Zwift to train while taking care of the new baby.

“She told me once before she got her bike, ‘Riding up those mountains doesn’t seem enjoyable to me,’” Cutter says. “I told her in no way did I ever think I’d be riding up these hills. . . . But as I slowly got better and started making these small accomplishments, I wanted to keep going to see where I’d climb next.”

Wherever it is, he won’t give up until he gets there. 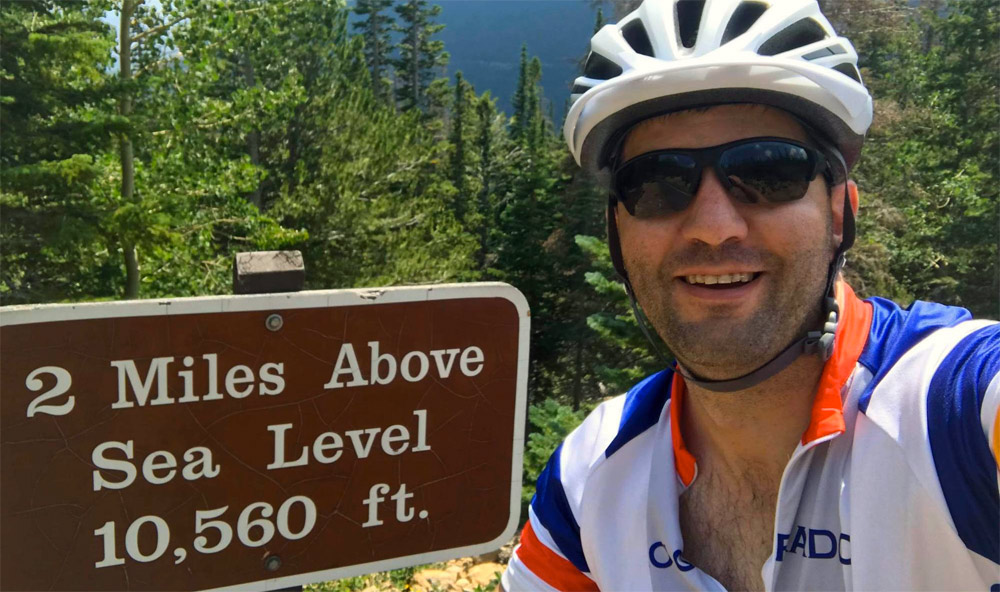 Got long-ride goals? Enroll in Zwift's free Grand Fondo Training Plan for a flexible schedule of structured workouts tailored to your fitness level. You may also use the Companion app to browse and join some of the long group rides scheduled every weekend.

Got other goals? Zwift offers a wide variety of flexible training plans. Check out "Starting a Training Plan" to learn more!

Zwift How-to: Understanding Laps and Earning the Jersey over 3 years ago