Willkommen to Innsbruckring! This is the circuit race portion of Zwift's Innsbruck map and a favorite for multi-lap races due to its flat, fast profile and decisive Leg Snapper climb. Enjoy the meticulously recreated historic city center, but don't get too comfortable, as every lap calls for an all-out effort up The Leg Snapper.

What follows is a detailed look at key sections of this route from a racer's perspective. Top Zwift racer and triathlete Matt Gardiner has generously shared some pointers, so we know you'll find this quick tour's tips useful when race day arrives!

This loop is full of false flats and sharp descents which can catch you off-guard if gaps open up. Stay vigilant, though, and you should be able to hang in the draft even as the pack flies through most of the course at high speeds.

The decisive portion of this circuit, fittingly named "The Leg Snapper" by Zwifters, is a short but steep climb which always manages to thin the peloton and sap the legs. If you manage to hang with the front over this climb and save a little for the sprint, you may just have a shot at the podium. Good luck! 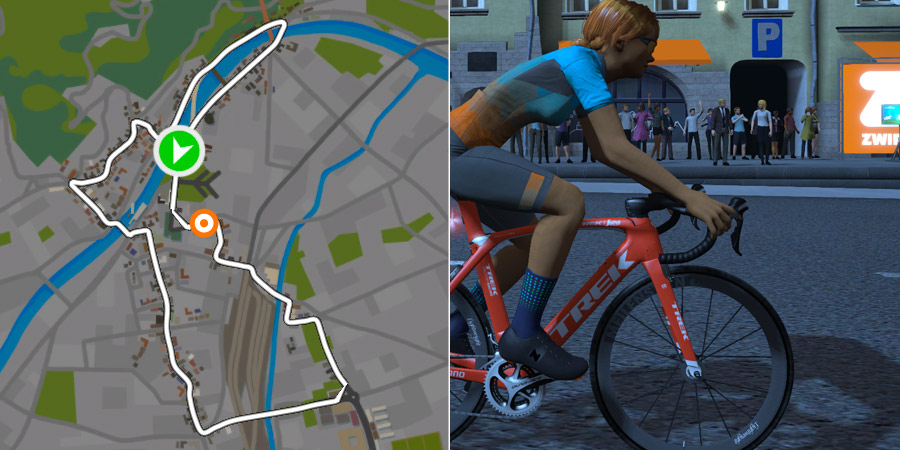 Matt says, "Like any Zwift race, the start on Innsbruckring is explosive, but after reaching cruising speed the flat roads make it relatively easy to stay tucked into the draft. This course can be deceiving to those who haven’t raced it before—starting out calm and flat before you hit one of the toughest features in the game."

Expect a fast start and be warmed up before the race begins. With The Leg Snapper down the road riders will probably not push the pace too much here, so take the chance to recover while you can. 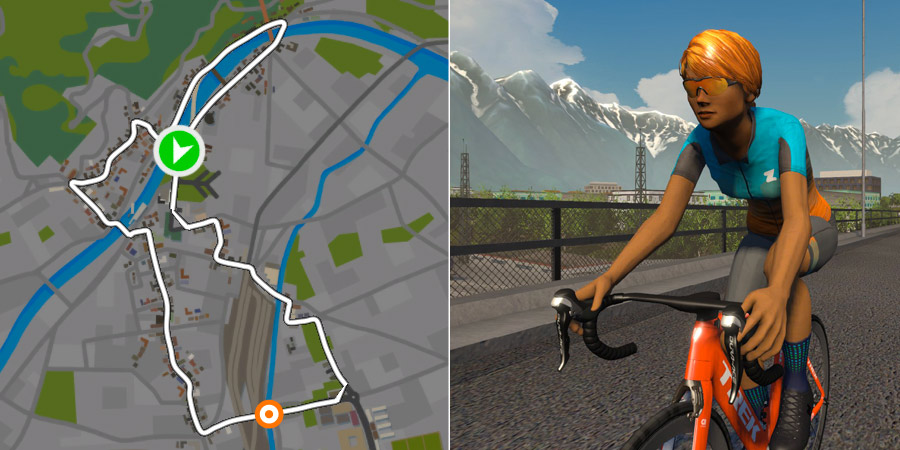 Matt says, "After touring the city streets for 2km, racers will take a right to head over a bridge to the other side of town. The bridge is a false flat of ~2% where the pack can start to string out—a carefully timed attack could catch some riders out when the front of the peloton hits the -5% descent on the other side." 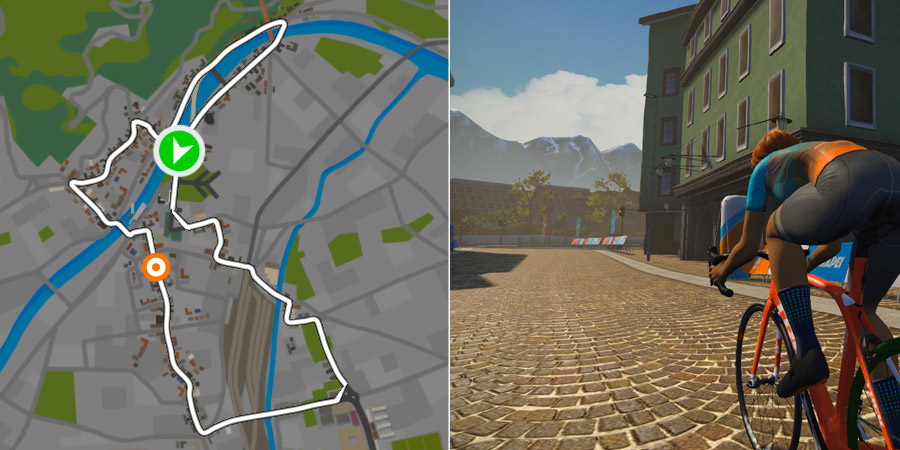 Matt says, "While this isn’t a challenging feature out on the course, for me it signals that it’s time to start finding the front of the group. With just under 1km to go before the 'main event' on Innsbruckring, this is the time to make sure you’re positioned perfectly."

This section begins when you pass the Triumphal Arch on your left and asphalt gives way to grey slate cobbles. You'll pass St. Anne's column, then grey slate will transition to brown brick (pictured above). Following Matt's advice, smart Zwifters will place themselves near the front of the group as they hit the hard right on the brown bricks, in order to start The Leg Snapper in an ideal position. 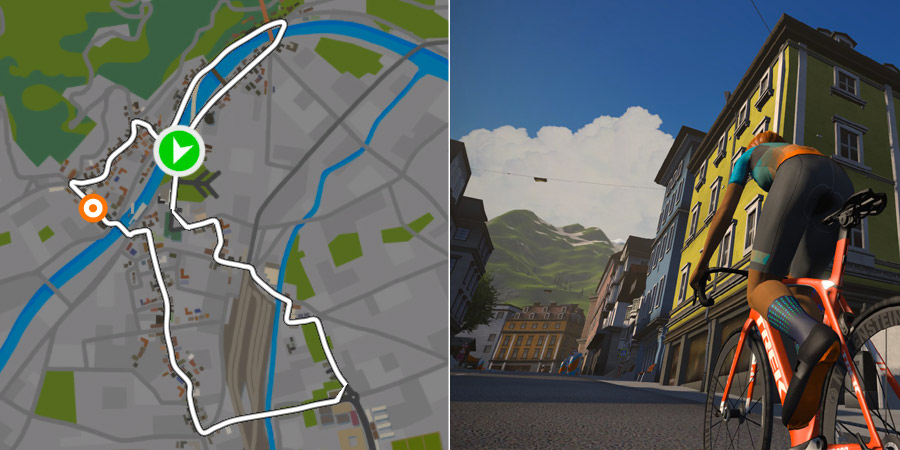 This is the most decisive section of Innsbruckring. Matt says, "The Leg Snapper is one of the most demanding climbs in the game, and it’s only 450m long! However, at 7%, it is sure to catch anyone at the back of the pack off guard. I don’t recommend patience—this is a full gas sprint every single lap."

Give it everything you've got, then grab a wheel on the sharp right at the top and try to recover as you head into the finish. 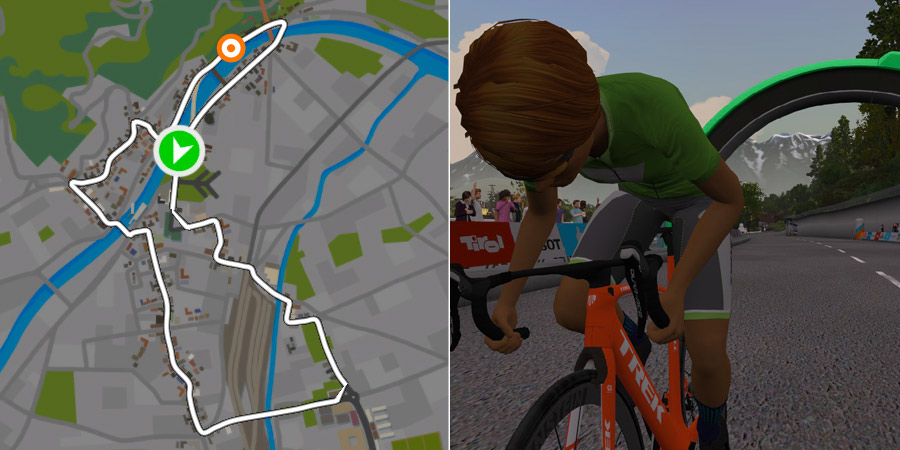 Matt says, "After the Leg Snapper, there is 3.5km of downhill and flat before the end of the race. Experienced Zwifters know that an attack may come at any moment in this section of the race..."

Most races on Zwift don't count sprint times, but watch for riders to attack here anyway looking to grab the sprint jersey or make a long attack on the final lap. 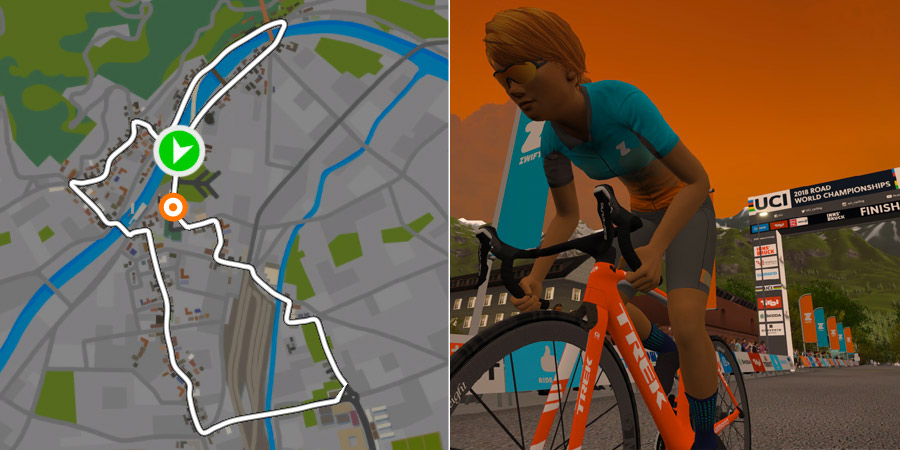 Matt says, "As racers take the final turn at 1.5km to go, attacks are nearly guaranteed. Find a wheel you trust and hold on!"

The hairpin right over the Inn River takes you onto the finishing straight, but don't start sprinting yet. This long lead-in to the finish banner is all about surfing wheels and knowing when to go all in. Valverde won Worlds with a long sprint from the front of a four-man pack, but that may not work for you!

If you've got a van power-up use it while drafting to conserve energy for your big sprint. Got an aero helmet? It's time to go fast!

We hope you've enjoyed this Race Recon. The goal of this series is to explain the features that make each Zwift route uniquely challenging for racers. Previously we looked at Watopia's Volcano Climb After Party. Be sure to read that post for more tips!