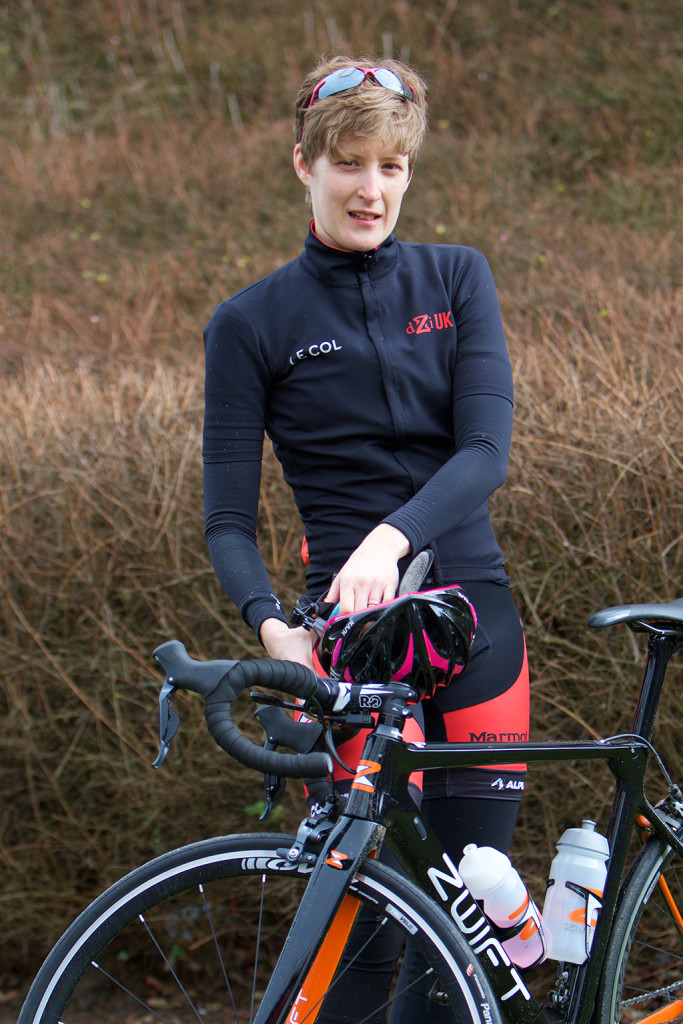 Cassie Baldi takes to the virtual roads with the Pros

CANYON//SRAM Racing are the new team on the block. Comprised of World Champions, National Champions, Olympians, Classics and Criterium winners; they're a team packed with talent, who want to do things differently and backed by the big brand names of Canyon, SRAM, Rapha.

Earlier this year CANYON//SRAM Racing signaled their intentions to challenge convention, by announcing a partnership with Zwift, aimed at unearthing new female pro talent. The task is straightforward but ambitious; to scour the thousands of amateur female riders on Zwift to discover a next generation of pro talent. Zwift Academy was born.

Fast forward to Gendt last week and team were in freezing cold Belgium preparing for their first race in Europe and their first group ride on Zwift. 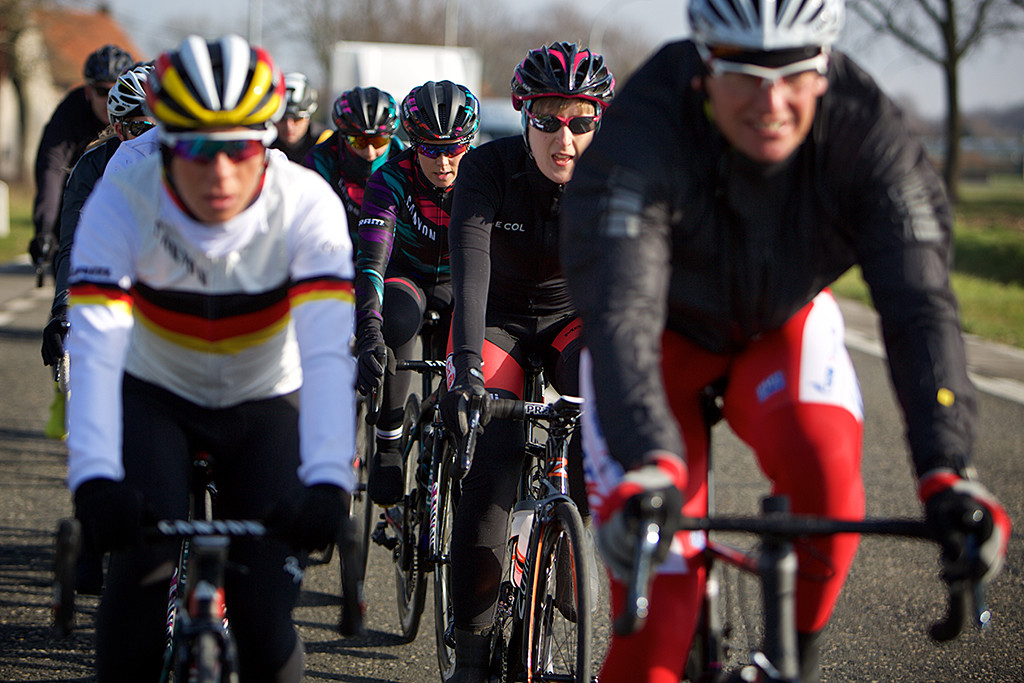 With little or no previous experience of Zwift, we decided to call in Cassie Baldi, cyclist, spin class teacher and founder of Zwift Ladies Only group, to introduce the team to the program that hopes to find their new team mate.

Cassie is 28 years old, a slightly built, chatty South Londoner who found herself using Zwift after finishing dead last in the Jalabert Sportive and being more determined than ever to improve her cycling capabilities.

"I got there with my £250 bike and everyone else is there with at least £2000 worth of bike. I said to my husband (Rob) 'You told me this wasn't a serious race!!' It was 120km and I was absolutely dead last. But Rob said 'You've done really well, and you're coming back next year, aren't you?'"

Cassie's husband Rob was right. She returned every year for five years after that, eventually trading her £250 starter bike for a Focus carbon model with swanky Dura Ace wheels. "I got really into it. From being a non-cyclist and knowing absolutely nothing about bikes to going 'Actually, I want this, I want that, I want the best I can get...'" and the 'best she could get' meant being able to train indoors as well as out.

"I'd decided I was improving every year, and I wanted to win it. And the only way to win it was to train a bit smarter.

"Before we went out to France, Rob told me that there was a program called Zwift, and I literally said 'Oh, don't be silly, that’s a game. It's not going to help me.' But I got stuck in and like all other Zwifters I now call it a game! But more importantly it’s a great Training Tool, because it honestly did help."

Cassie went on to place the fastest time for the Jalabert Sportive and says she knows it was thanks to Zwift that she won. Her passion for Zwift led her to wonder how many other women like herself were regular users.

"Every time I went on Zwift, I'd see one or two women, but I wanted to know who was out there. I didn't expect to get anything out of it, I just wanted to know why people were there, and say hello, and help create a stronger female community.

"It's a safe environment to talk about things. Women have different needs and they want to enjoy their training and need a community where they can ask questions. For example, I wore men's shorts because I didn't know there was anything else out there that would fit me better! Now I've found out from other women, it gives you that knowledge and insight. You can ask what chamois cream they use and what works for them! It's stuff some people wouldn't necessarily feel comfortable asking on a mixed forum. The group has reached 500 members and we’ve recently opened it up to non-Zwifters. There are members who are spinners or cyclists. It's a Facebook group for any ladies who want a little bit of information about cycling. Above all else, it’s a friendly and welcoming place for current and aspiring female cyclists”.

And now Cassie sits in the bar area of a hotel having just been out on a group ride around Ghent with the CANYON//SRAM Racing team as a kind of ambassador of the upcoming Zwift Academy project. Later today she will ride alongside them in their first experience on the virtual roads of Zwift.

"I met the girls at breakfast. It was very intimidating for me, but in a good way! These ladies are world class, and they're super strong, but it was really good and they were lovely. We met up outside and did a steady ride - Everyone seemed really friendly and I felt welcome. I didn't really chat too much as I was trying to stay with the group and not fall off as it was very icy! It was really cool though. We rode for about 50km at about 30km an hour, and had some general chit-chat, like what they think about Zwift and whether they've had chance to use it yet. 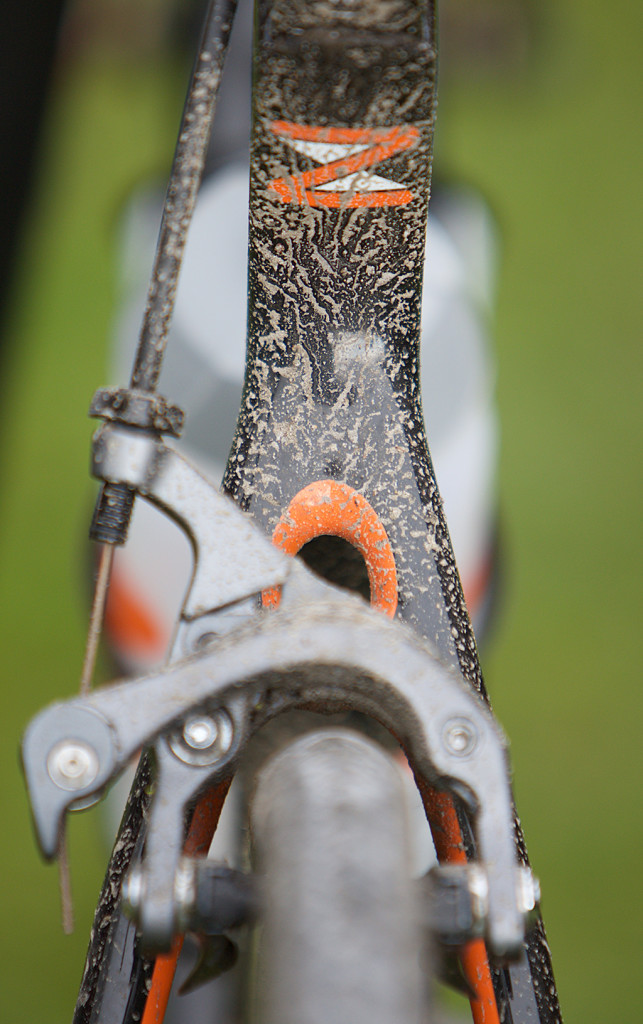 "Their kit and set up is beautiful - their bikes are gorgeous - so it'll be amazing to see them on the computer screen. There are National and World Champions in there so I can't wait to see them on Zwift, and I really hope they inspire more women to get riding."

"It's going to be an incredible and surreal experience for everyone involved to be sat next to such amazing women on the roads of Zwift."

Further details of the CANYON//SRAM Racing, Zwift Academy were announced today. The program will begin in April and comprise of 3 STAGES.