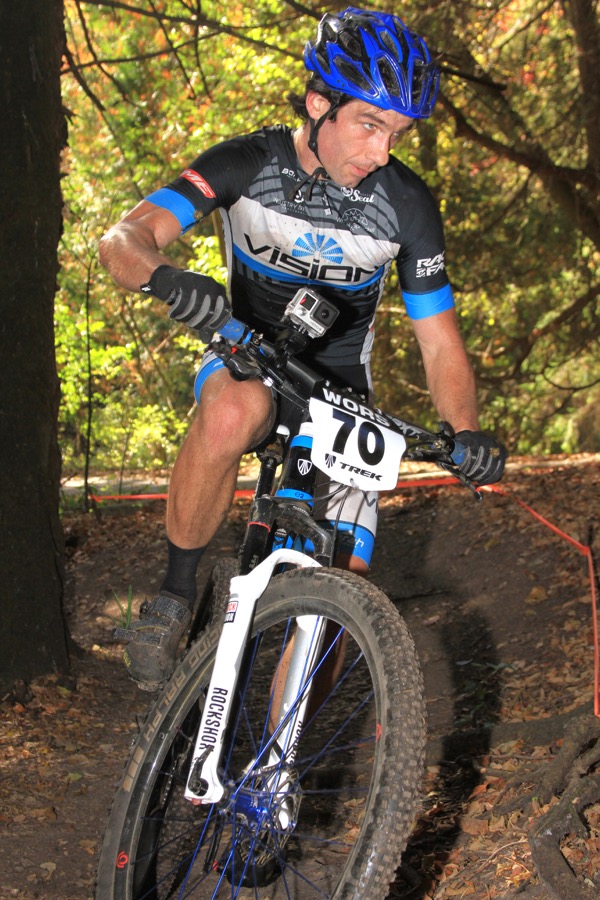 No matter when you ride, you'll see a few regular faces on Zwift – and #1 ranked USA Cycling MTB Pro Nathan Guerra (pronounced Gaer-ruh) is probably one of them. Guerra was one of the early beta testers and has the distinction of logging more than 15,000 mi/24,000 KM on Zwift. But maybe you know him better as the unofficial “voice of Zwift.”

Ever since the community's Zwift Training Races (ZTR) started, Guerra has taken on the role of Zwift racing broadcaster. Whenever a KISS or ZTR event is on, you can tune in to his Twitch.tv video stream and get play-by-play commentary of all the action. 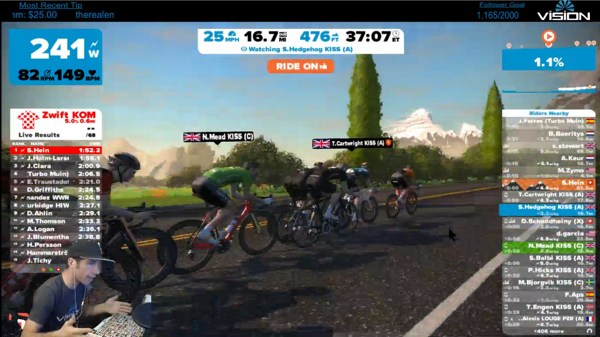 It's like seeing the sun come up when talking with Nathan about the game, and he had a lot to say.

How did you get into Zwift?

In 2010, our third child was born. I was a full-time student, so to keep up with training, I’d take my bike, a baby monitor, and a lot of food, then ride from 8 p.m. to 2 a.m. on the trainer while raiding in World of Warcraft.

So I’m a cyclist who used gaming to get massive hours on the bike and go pro. That was the start of my best cycling year.

Then in December 2014, I’m riding my bike, playing games, going around Facebook, and I see a post from a local group about Zwift. Immediately, I wrote in for an invite. I was really aggressive about it. And now when I game, I’m riding, instead of just gaming and riding. 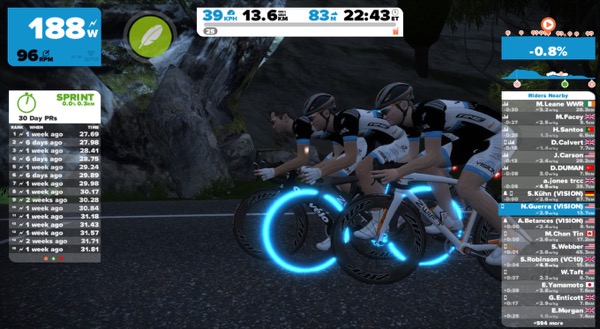 How has Zwift helped with your training?

There’s a burnout factor Zwift has helped with. The reality of doing those hours all over again versus being engaged in a game with a community makes a huge difference.

There’s also something I say a lot in stream about chasing pixels.

‘Chasing pixels is harder than motorpacing.’

With motorpacing, there’s a dynamic outside that’s changing. In Zwift, there’s a set number that challenges you. And actually - during a race, I hate this - but in training I would almost prefer that there’s a zPower beast in front of me because it makes me do something I would never do in real life on a real ride. 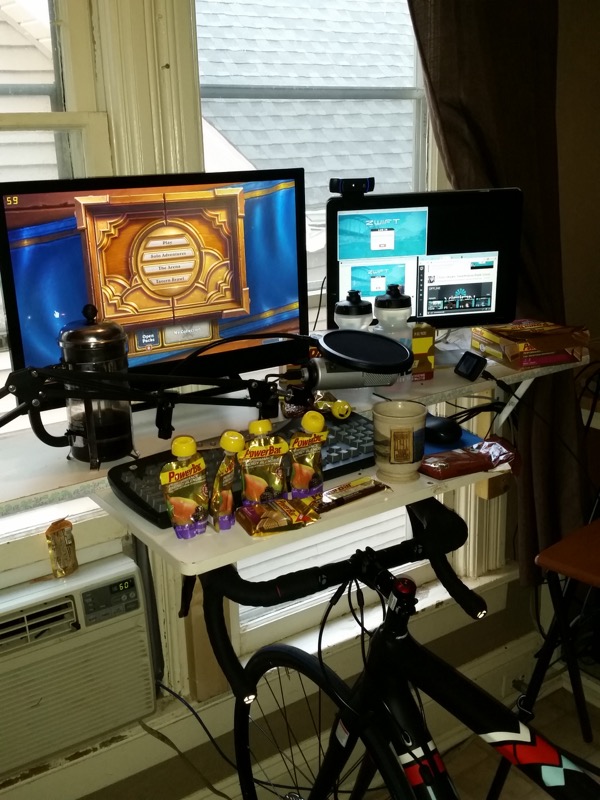 We built a desk, but it’s not like a desk. We took 2x4’s and put them into the window. And then we put L-braces on the 2x4’s so we could put countertops on top. The handlebars of my bike have to go immediately underneath. There’s an air conditioner below the desk, and a window that’s always open. My computer radiates heat into the whole room and can help create a sauna effect that helps with training.

What do you think about the events so far?

Having numbers to shoot for amongst a global community of people getting involved in a the higher end of ZTR racing is motivating. We don’t say it, but we’re eyeing each other and comparing numbers in the back of our minds. That’s the focus of the twitch channel: all of us getting better at cycling together.

As far as the racing commentary goes, I’ve been partnering with a few race organizers from KISS, ZTR, and TFC, and with all the races they’re scheduling, it’s looking like I’ll be livestreaming almost 5 days a week with only Wednesdays off.

How do you see events evolving on Zwift in the future?

So I’ve actually been extremely opinionated about this.

I don’t like the naysayers who say something can’t be something. I don’t believe in saying that this can never be an actual race environment. I feel like that’s in the same tone as the person who sees the trainer as the problem when going into their expectations of cycling.

When someone asked me, ‘how do you sit on a trainer that long?’ I asked, ‘Well, what’s the problem here? The problem is your expectation of what cycling is. You think cycling is only riding on pavement on two wheels down a road and experiencing the outdoors and nature - which are all amazing, great things - I have simply changed my expectations of what cycling is and can be.’

That approach to it has completely changed why I would be mad or not mad about sitting on a trainer. My expectation of cycling is that it’s me pedaling and producing power. And sometimes that’s outside on a road, and sometimes I’m doing that on a bike inside.

I have the full expectation that we can have an amazing online venue that is continually available to everyone online in the world to have a race. That is one of the best venues you can possibly have!

I look at DOTA 2 international’s 10 million dollar prize pool this year, and I say, “Why can’t cycling be that with a real, physical expression of what you’re pushing into a bike”?

Where do you see yourself in the future?

My personal goals include winning the Wisconsin Off Road; I’ve been the runner up for the last 3 years in a row (laughs). I was Ranked #1 in USA Cycling MTB last year, and I want to repeat that as well. 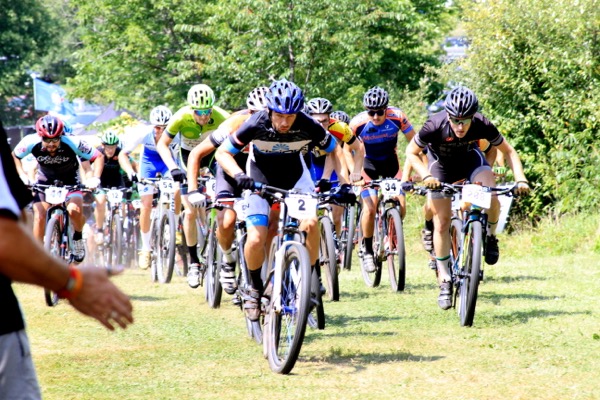 Thanks to Zwift, my company - Vision Cycling - is also going out to a lot of different places now, and we’re starting to get virtual members all around the world. Getting to network with other cyclists and having that community through Zwift has been amazing.

I would like to make a couple appearances on the coast, but I’m really going to focus in on winning races in every midwest series this year, and tie that in with planting new Vision teams.

If you haven’t seen one of Nathan’s broadcasts yet, we highly recommend checking him out. His energy and passion for Zwift is fun - and highly contagious.

This interview has been edited and condensed.

Sit down with Simon Schofield, long time Zwifter and creator of the Zwiftcast over 6 years ago