In continuation of our AMGEN Tour of California Virtual Ride Series, we hosted the CANYON//SRAM Racing women’s professional team in Lake Tahoe as they prepared for the prestigious 4 day stage race. Team members Alena Amialiusik, Hannah Barnes, Lisa Brennauer and Barbara Guarischi joined us for the ride. 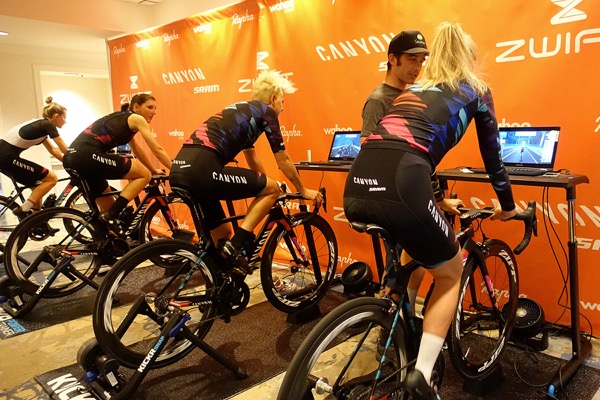 In the live-streamed spin through Watopia, our presenter Nathan Guerra quizzed the girls about their path to a pro team. There were a lot of laughs as they candidly shared stories about all aspects of their cycling experience. We learned about the time and effort it takes to be a pro cyclist, what happens when they show up on a Zwift ride, what they think of Zwift Academy and who forgot to bring their bibs to a race (it was Lisa). 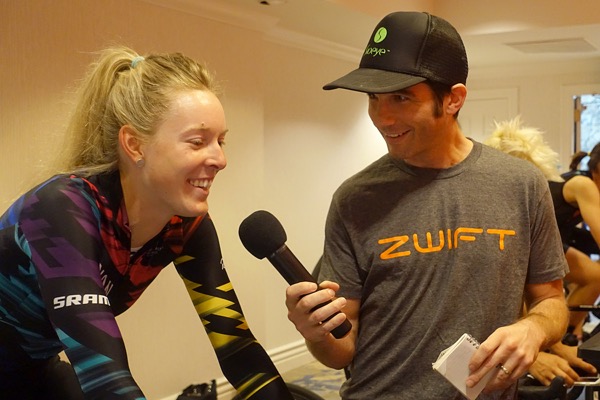 Just like the Zwift community, the team represents a broad mix of nationalities and cycling strengths. Alena is a climber from Belarus, Barbara is an Italian sprinter, Lisa is a time-trial specialist from Germany, and Hannah is a sprinter from Great Britain. In previous sport lives, they were gymnasts, speed skaters, field hockey players and track sprinters.

The team was introduced to Zwift at their first camp together earlier this year. Apparently, on their first virtual ride, they lit up the watts and constantly attacked each other for jerseys. For the CANYON//SRAM team, Zwift is more than a training resource. It’s a way to connect with fans, fellow cyclists, and even former competitors. Lisa Brennauer can’t sneak into Watopia for a discrete spin.

“Whenever I join a ride, people are like ‘Whoa, there’s a pro in the house!’ and they are like, ‘Hi Lisa! Hi Lisa!’ It’s exciting and I really like it.”

She chats up other riders and revels in the recognition. 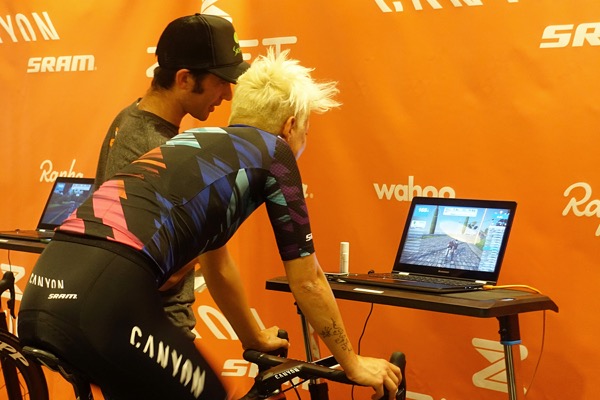 The girls train anywhere from 15-20 hours a week and they use Zwift to augment their program. It allows them to fit in a double session or enjoy a recovery ride when the weather or daylight isn’t accommodating. Their sentiments echo a lot of Zwifters, “It makes the time go by so much faster,” Lisa offered.

When the conversation turned to Zwift Academy, the girls were all in agreement that this was an important and exciting project.

“It’s a great idea. There are a lot of really strong and talented people who don’t have the opportunity to get to the big races,” Alena chimed in.

Zwift Academy is an unprecedented move on the pro scene. Recognizing the challenges associated with discovering and developing women’s talent, CANYON//SRAM Racing and Zwift have collaborated to forge a new path to a pro contract.

When asked what they thought of the Zwift Academy rides, Hannah, without hesitation, blurted out, “They’re hard!". 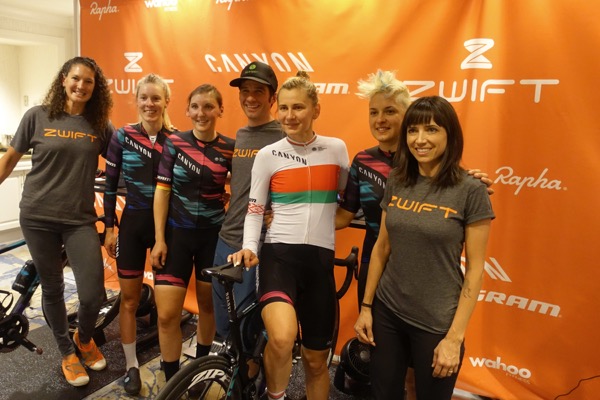