Some racers made it their mission to cause chaos in Round Nine, while a chasing bunch motivated for a final sprint tried to keep things under control.

Racers returned to the Watopia Flat course this week after first competing there in Round Three. This time, they took on four laps instead of three, for a total distance of just over 40 kilometers. The route features mostly flat terrain, with a series of short, rolling hills toward the end of each lap. It’s friendly to sprinters, but attackers have a few chances to take control. 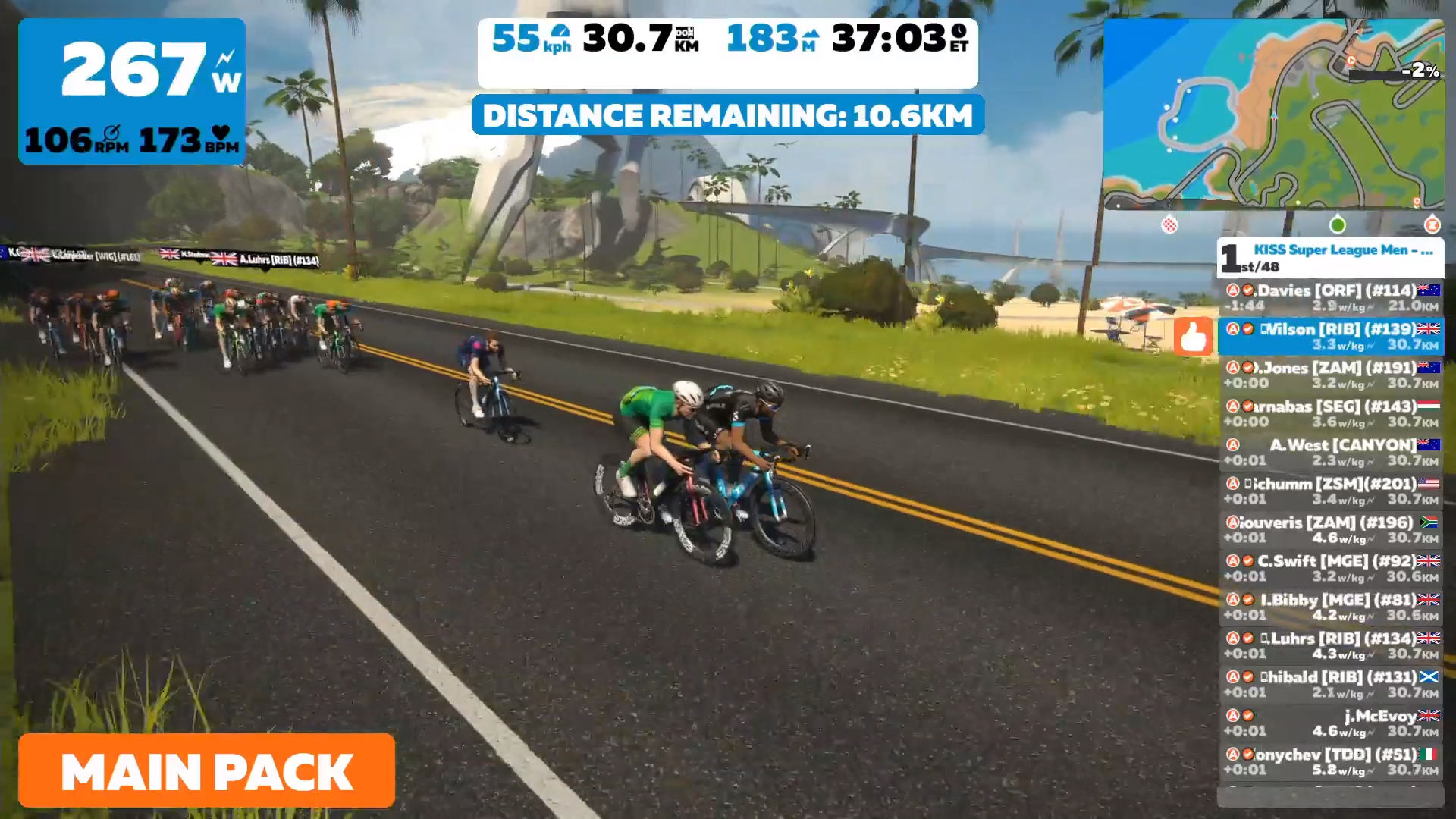 Several riders tried to attack the speeding bunch throughout the race, but none of them lasted for long. It was hard to get away or even split the group. Some riders did fall off the back as the bunch chased them down, though.

Casey Schumm (Zwift All Stars) followed nearly every move, trying to join any breakaway that might form. A couple times, he led the charge himself. Ben Healy (Team Wiggins – Le Col), Alexandar Richardson (Canyon dhb p/b Bloor Homes), Connor Swift (Madison Genesis), and Schumm’s teammate Kim Little each spent some time off the front of the group. Each time, they got a lead of a few seconds, but riders in the bunch took shelter in others’ slipstreams while working to close the gaps.

Ribble Pro Cycling rode an aggressive race as well. Si Wilson attacked a couple of times on flatter sections, while Alex Luhrs and John Archibald used the intermediate sprints to get a gap.

This route’s intermediate sprint banner is located just before a short hill. If the leading sprinters have energy left, they can punch it again going up that climb. The rest of the group then has to work harder to rejoin them. Along with Luhrs and Archibald, Ollie Jones (Zwift Academy Dream Team) and Maximilian Stedman (Canyon dhb p/b Bloor Homes) also tried this a couple of times, but they couldn’t stay away. 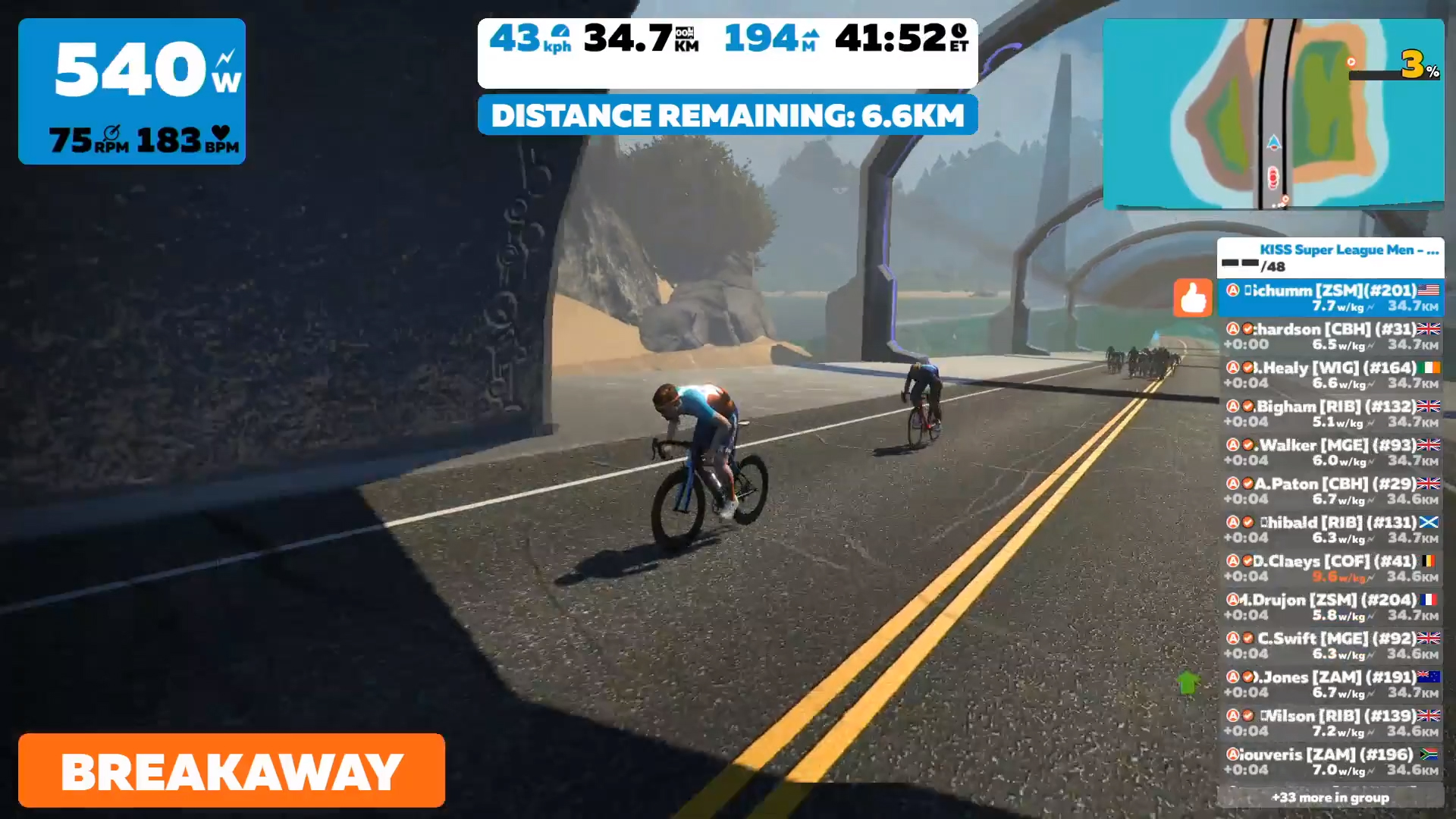 On the final lap, Stedman attacked hard on the kicker after the sprint banner. He used a well-timed feather PowerUp to give himself a temporary weight advantage. Jones and Luhrs chased as they had before, but this time they couldn’t reach him! He was clear of the group and held a gap of a few seconds. It was brought back, though, just before the slight downhill run-in to the finish.

Steve Young (Zwift All Stars) was the first to launch an all-out sprint. With no PowerUp to help him, his best shot at the win was to catch the other racers by surprise. At first, it was working – Young found a several bike lengths on the group.

Dan Bigham (Ribble Pro Cycling) flew by with an aero helmet PowerUp on top of massive power. Last time on this route, he tried an attack like Stedman’s and almost made it. Now he’d waited for the sprint and it looked like it might pay off. Behind him, a group of four racers passed Young – three of them from the Zwift Academy Dream Team. The fourth was Ian Bibby (Madison Genesis), who surged past Bigham at the last moment! Bibby chalked up a fourth win for himself and a staggering sixth for the league’s leading team. 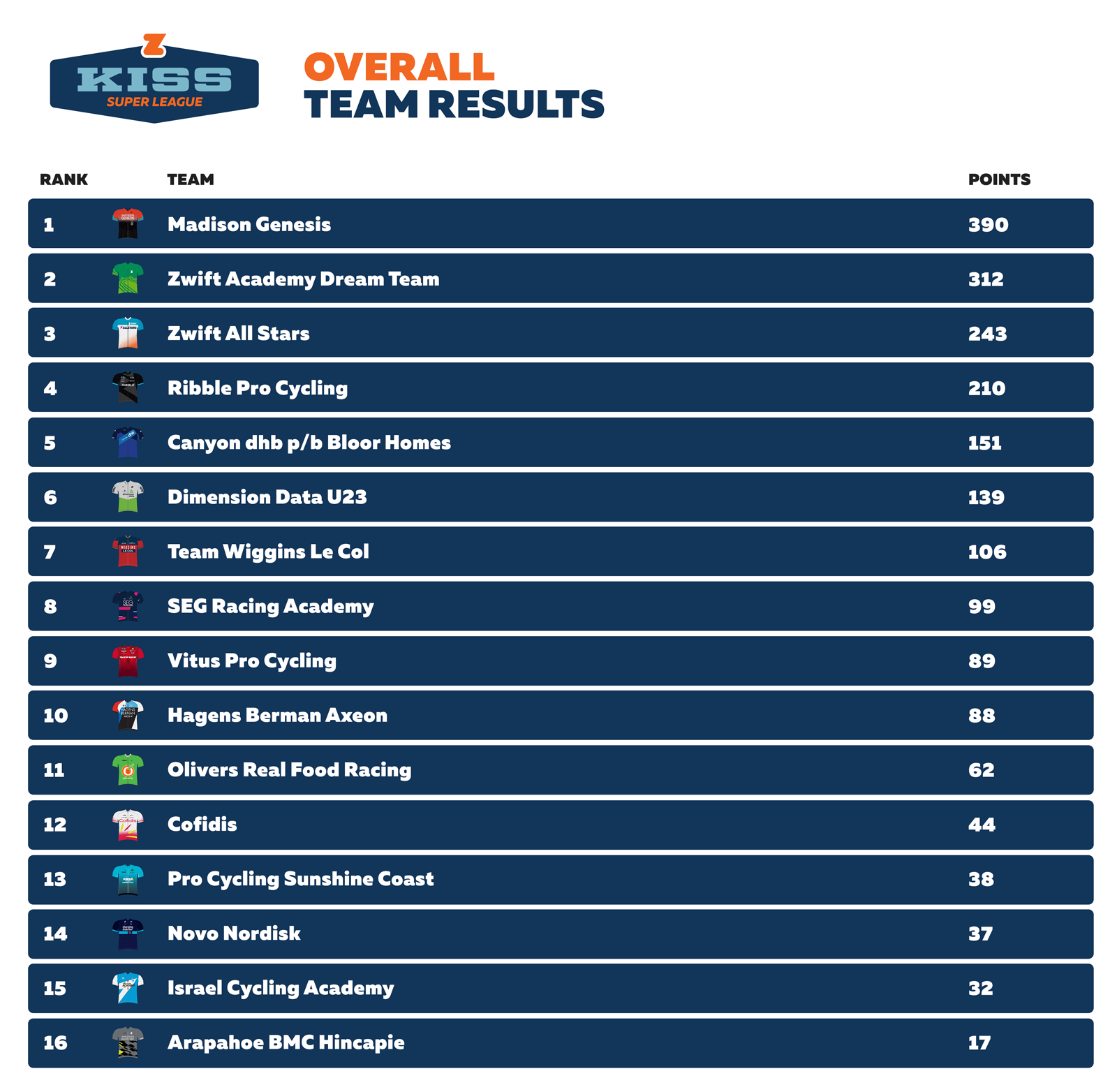 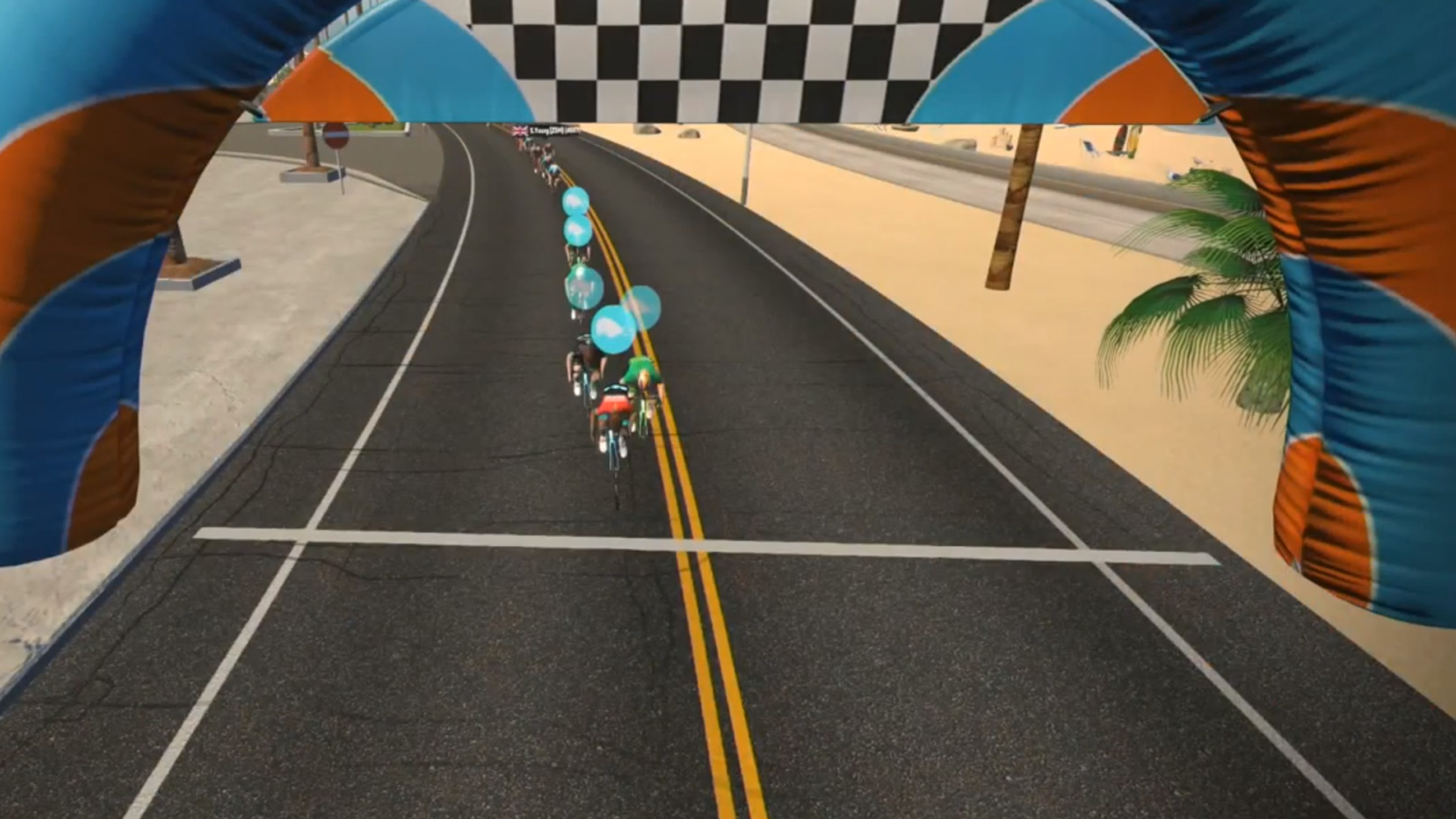 After the race, Kim Little (Zwift All Stars) said his team knew they probably couldn’t get the points to come up to first or second place in the team competition. So they decided to take more risks. He and Schumm went for attacks and intermediate sprints, while Young and Mathieu Drujon would save energy in the group to go for the win.

“We went hard on the first (sprint) prime, but didn't quite have the power and for me it burned a few too many matches,” said Little, who finished in 10th place. “It took a while to recover, and a few scary moments at the back of the pack.”

The Zwift All Stars earned a lot of points this week after all, placing three riders in the top 10. So did the Zwift Academy Dream Team, with Brad Gouveris, Ollie Jones, and Alex West all finishing in the top 5. Those teams make up the overall podium with Madison Genesis at the top, but Ribble Pro Cycling has been approaching in fourth place.

Over the course of the Super League, Little has noticed that the style of these races is different than others on Zwift. The pace is higher overall, but there are fewer attacks – at least, ones that stick. What can cause more trouble is the surges those attacks cause.

“These guys can dig harder, so we need to be more attentive if the pace picks up to not get dropped off the back,” he said. “The pros have caught onto the tactics faster than I thought.”

Dan Bigham wrote on Twitter that he opened his sprint too early, but he still enjoyed the race - and the whole league.

"Fun race and my final #ZwiftKSL of this series as I’m away next week," Bigham wrote. "Thoroughly enjoyed it. It’s great that @GoZwift are championing cycle eSports. Love it or hate it, it’s here to stay!" 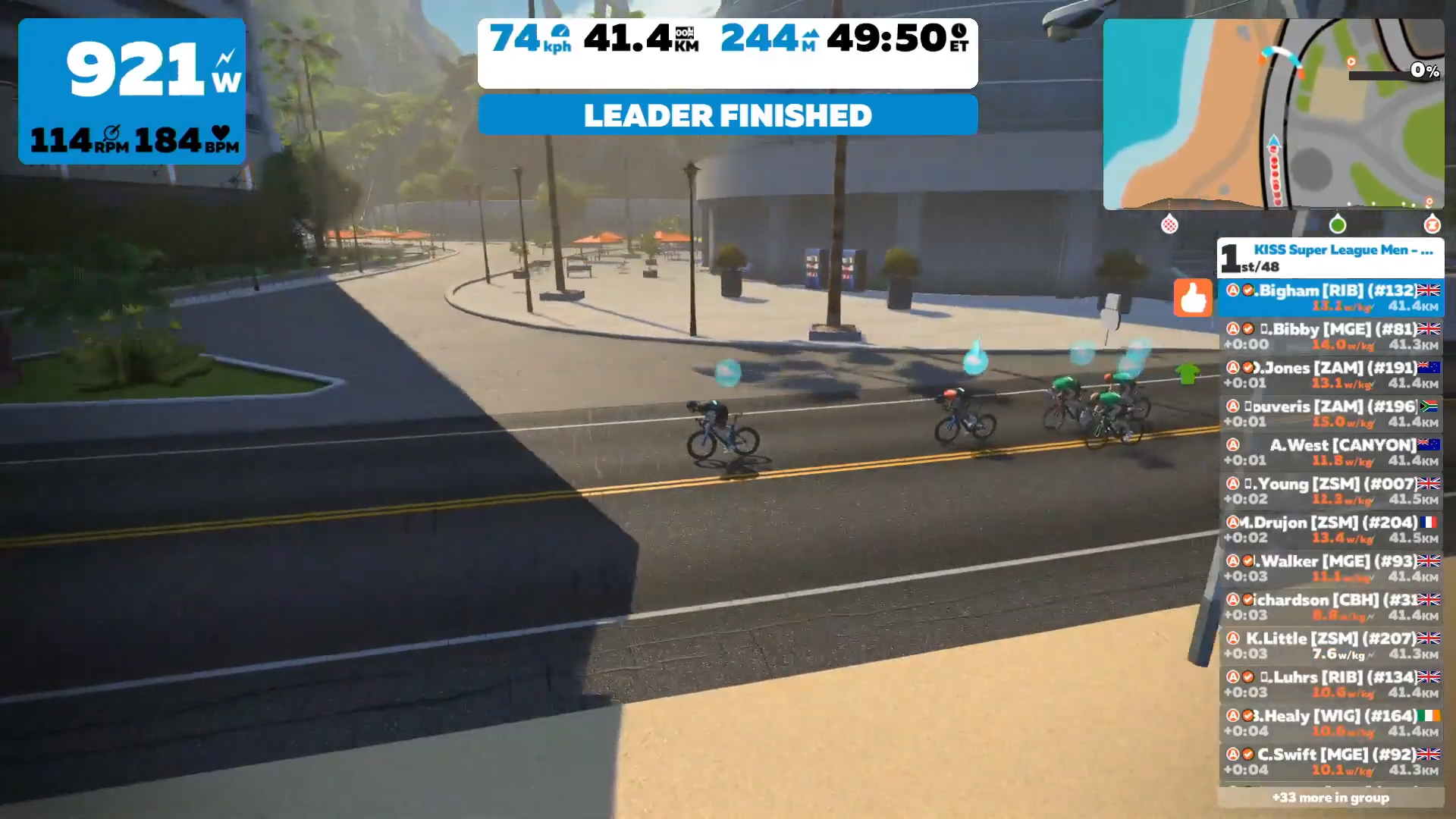 Next Week: Round Ten

Tune in live next Tuesday to see all the action! Please note: Race times have changed in the U.S. due to Daylight Saving Time.