Leo Hynes can’t see the finish line clearly, but he knows it’s there and he’s running for it. His guide beside him says it’s not far now. He can feel a small tug on the cord that connects the two athletes, steering him toward their goal.

Hynes, 47, is a visually impaired triathlete. When he lost most of his eyesight several years ago, he thought he would never compete in a sport again. Now a para aquathlon world champion, he uses Zwift to help him train for more championships and a shot at the Paralympics. 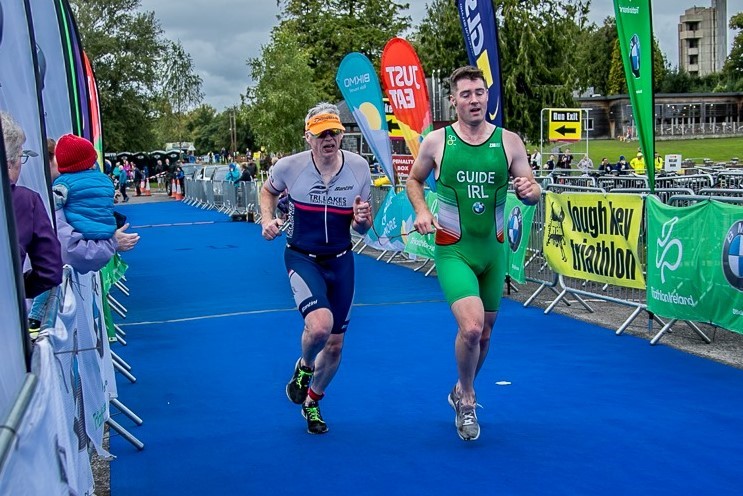 Hynes was born with vision only in his right eye. For almost four decades he lived a normal and active life in Ireland playing rugby, soccer, and Gaelic football. He even did triathlon for a couple of years.

One day in 2009, he noticed that the square grid lines of his Sudoku puzzle were curving as he moved his eyes around the page. The numbers began to blur.

After a battery of tests and scans, Hynes was diagnosed with age-related macular degeneration (AMD). At first, his doctors gave him regular injections that cleared his sight, but after a few years they stopped working. His eyesight got worse and worse. In 2015, Hynes was declared legally blind.

“It was a shock to the system,” he says. “All of a sudden, you’re thrown into turmoil and your life is upside down.”

Hynes now has about 10% vision in his right eye and none in his left. His central vision is blurry, but he can make out shapes with the help of glasses. He can see more detail if he looks at things from the corner of his eye, in his peripheral vision.

Unable to drive or continue his job as an electronics engineer, Hynes spent two years mostly in his house. His wife and three children saw a lot more of him, but he was depressed and avoided other people. The thought of not being able to recognize them, and having to explain why, was too much.

Hynes’ wife, Aisling, encouraged him to get out of the house and try doing something he enjoyed. The Galway Visually Impaired Activity Group was advertising a sports day in their local town for people with disabilities. Hynes reluctantly agreed to go.

When he got there, he took a ride on a tandem bike as the “stoker,” while a sighted volunteer “captain” took care of steering, shifting, and braking.

“I immediately fell in love with it – just being out cycling, having fresh air, being on the bike again,” Hynes says.

He started coming out for regular social tandem rides with the group, where local volunteers would take turns as captain for him and other visually impaired riders.

It didn’t take long for Hynes to get stronger. Seeking out faster rides, he joined a nearby triathlon club on their Sunday spins. When they suggested that he compete in triathlons again, he joked, “Of course, no problem at all.”

The chairman of the club, Stephen Corrigan, was serious. Corrigan told him, “You figure out how to do it and I’ll do it with you.”

Hynes looked it up on Google.

For the swim leg of a paratriathlon, a visually impaired athlete is tethered to a guide athlete with a bungee cord, about one meter (a little over 3 feet) in length.

“Your guide swims beside you, and then you feel a pull on the tether and you know which direction to go, or they will kind of gently push you or hit you in the right direction,” Hynes says. The visually impaired athlete then rides the bike leg on the back of a tandem bicycle piloted by his or her guide. Finally, during the run leg, the two are joined by a tether again.

“It’s a lot of trust you have between your guide and yourself, because they’re basically your eyes,” Hynes says. The guide must communicate every turn, gear change, hill, and bump in the road.

Hynes and Corrigan had never tried swimming or running together, and they had only ridden together on a tandem bike twice. Still, they gave it a shot and entered a local triathlon in June 2018.

“We didn’t drown, we didn’t fall, and we got over the line, so that was a success,” Hynes says, chuckling.

Hynes started visiting Dublin once a month for Triathlon Ireland’s para athlete training days. He continued to train as he entered several more local triathlons, and he kept getting faster.

Then, Triathlon Ireland asked him to participate in an international competition on his country’s behalf. He traveled to Portugal in October 2018 for the Madeira Paratriathlon World Cup, with experienced triathlete Dave Tilly as his sighted guide.

For the first time, Hynes raced in a skinsuit with the green, white, and orange stripes of Ireland’s flag. He placed 13th in the sprint triathlon, which includes a 750-meter swim, 20-kilometer bike ride, and 5-kilometer run.

“That was a proud day for me to represent my country,” he said. 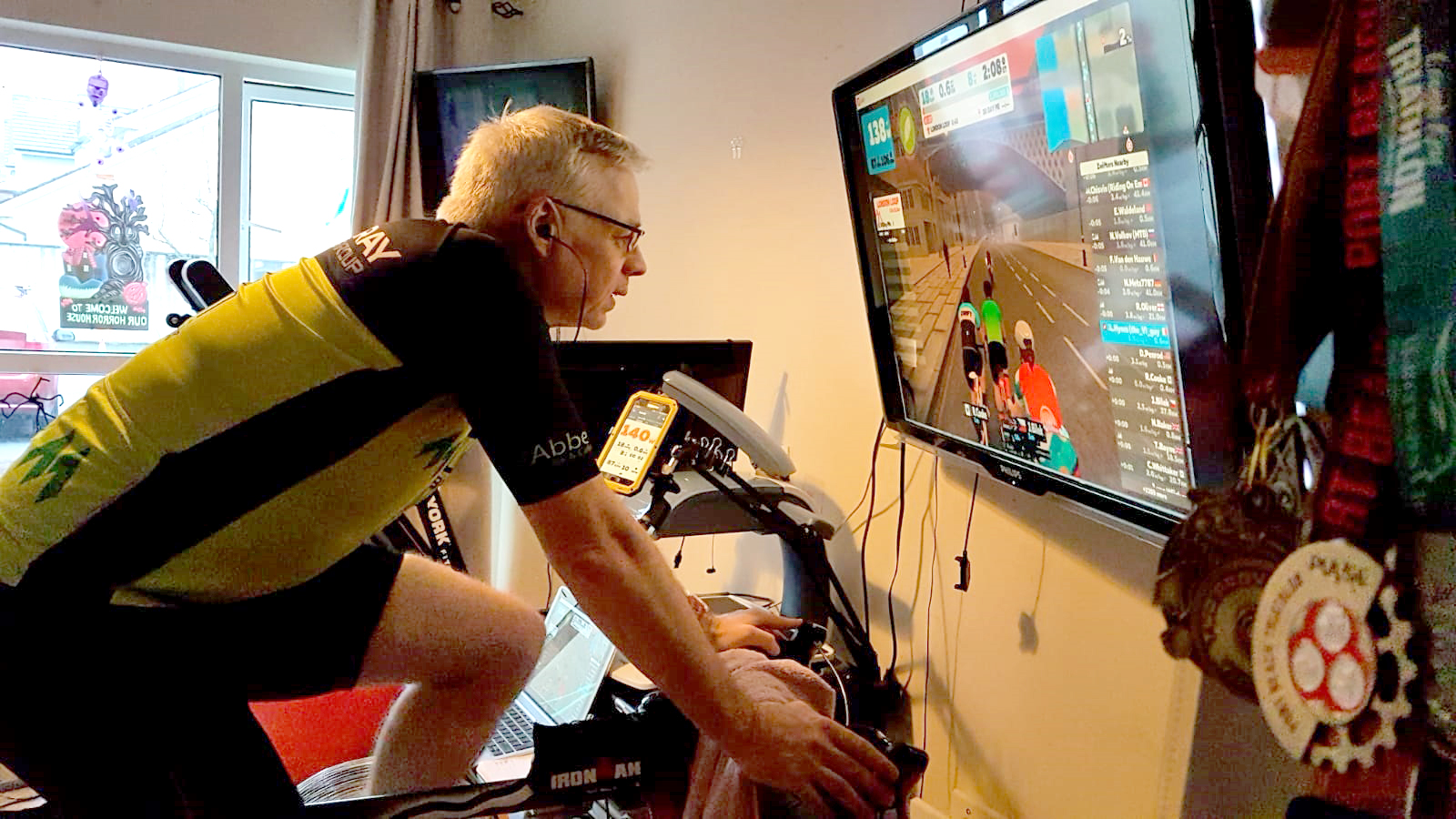 Hynes thought his indoor trainer was boring and didn’t use it much. When he did, his rides were short and unstructured.

Then, one day in late 2018, he came across some YouTube videos of people riding bikes with a computer game.

His reaction when he tried it himself? “This is fantastic. This is brilliant. I love it.”

It’s blurry, but he can see his avatar moving through the virtual worlds under his own power – no tandem or tether needed. His 42-inch TV screen sits about six inches from his face, with Zwift Companion on a nearby smartphone displaying his data.

“It’s the closest thing to me feeling like I’m outside cycling on my own, you know?” he says. “I can’t cycle outside unless it’s a tandem.”

Hynes got a treadmill and began running on Zwift, too. Then he upgraded his old trainer to a Wahoo Kickr Core and hired a coach to help him structure his training.

Most of the rides he does on Zwift are workouts now, though he sometimes does free rides or joins races with other members of his triathlon club. They use Discord, a voice chat application, to talk to each other.

Hynes’ next chance to represent his country was at the ITU Multisport World Championships in Pontevedra, Spain, held in April and May. Once again, Tilly was his guide.

He placed third in the duathlon event (a 5k run, 20k bike, and 2.5k run) among visually impaired athletes. A few days later, he won the aquathlon world championship (a 1k swim and a 5k run).

“It was fantastic,” Hynes said. “All the Irish there were celebrating when we were up on the podium. I’m delighted for myself and for Dave.”

He says he’s grateful to the guides like Tilly and Corrigan who choose to ride and race with him.

In September, he took second place in the Paratriathlon National Championships of Ireland. Now he’s training for competition in more international races, with hopes to eventually qualify for the Paralympic Games – if not Tokyo 2020, then Paris 2024.

These days, Hynes spends plenty of time outside the house and enjoys meeting people. Through losing his sight, he found a new community and many new friends. His mental health is in a better state thanks to support he found through the National Council for the Blind of Ireland.

“Everyone has their cross to bear, but you just have to give yourself a kick in the backside and make the best of what you have,” he says. “Go out there and do what you enjoy doing.”

And if you need to, find someone to guide you on your way. 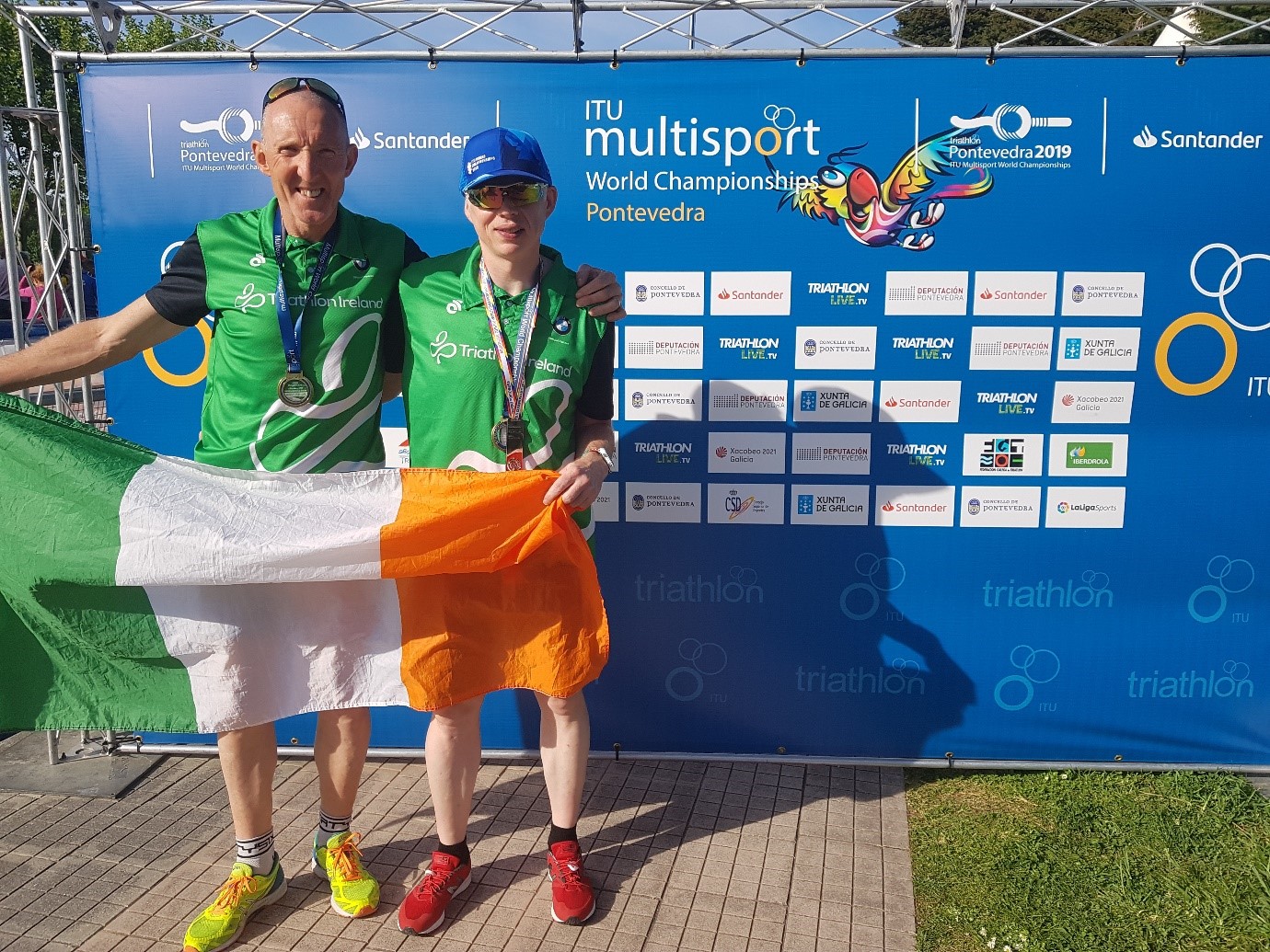 If you want to be a guide for a visually impaired athlete, try asking your local and national sports associations, organizations that serve the blind, or a nearby tandem cycling club how you can get involved.

Smart Treadmills vs Footpods over 2 years ago