Whether you want to try your first metric century ride or you do them all the time, TBR 101 – Endurance welcomes you!

James New, a leader of the TBR group, sums up this ride as “a fun place to hit your 3-hour endurance goal.”

“We love to support the new endurance riders, and many first-timers are now regulars,” James says. “It’s a point of pride when you see a rider that just did their first 101 last week and this week they are back and their name has TBR at the end. They come back and help others to get over the line.” 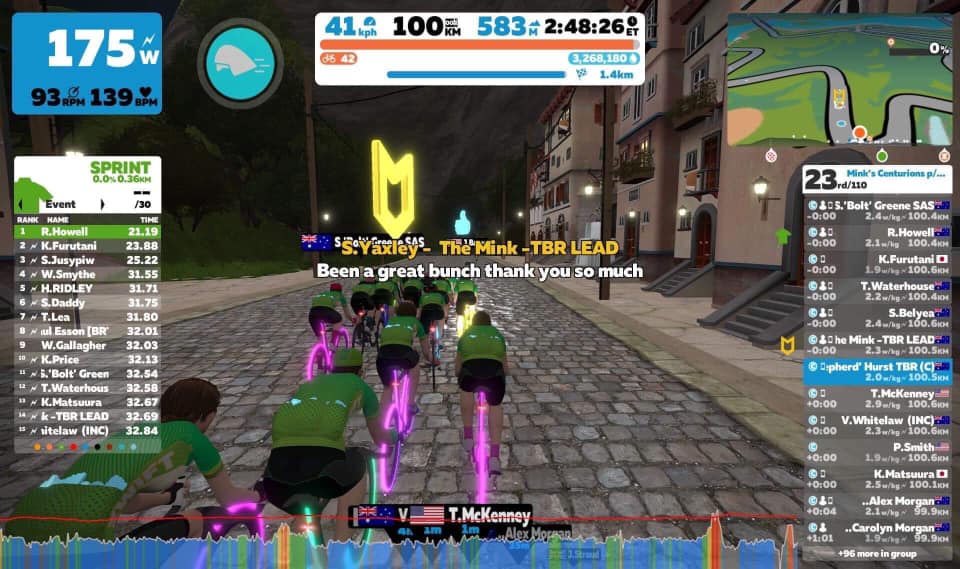 TBR, which stands for “The Big Ring,” is a Zwift community group that stresses inclusivity. They began by holding weight-handicapped races up Watopia’s Epic KOM climb.

Their group rides also do things a little differently. TBR 101 uses speed as a guide for pace rather than w/kg (watts per kilogram), which can be different for different riders.

This ride does not use Zwift’s “fence” feature. The fence helps to keep groups together by warning people (and eventually removing them) who ride too far ahead of the leader. TBR has chosen to go without the fence for most of its rides, except for interval sessions that can break up more easily.

TBR aims to create a positive experience for all riders, even the “flyers” who go off the front. The group has found that many people who ride ahead tend to drop back to the main group after a while. Most riders do still gather around the ride leader.

At the other end of the group, a team of sweepers helps dropped riders who start falling behind. Depending on who is riding and what they need, sweepers also may drop back to help them finish at a slower pace.

“We believe that to be an effective ride leader, and to run a good group ride, we need to engage with the rider,” James says. “It's more than promoting one personality, it's about enjoying all the personalities we meet in the ride. In this ride we form lasting friendships. We come back to support and hang out with each other.”

More than 200 riders join in each week, with special events sometimes pulling in more. One recent event was a TBR 101 ride with “Miffy’s Misfits,” jointly promoted by the HWC, TeamZF, and REVO groups. The ride raised funds and awareness for the Breast Cancer NZ Foundation and drew more than 410 people!

James New’s story of the TBR 101 – Endurance ride goes like this:

I suppose I will lay the blame on Sharron Yaxley aka The MINK. We wanted the perfect Saturday endurance ride and Sharron had the knowledge and patience needed to put it together. It debuted in late February 2019. The first week we had 150 riders and 98 completing the century. The ride was renamed in September 2019 from ‘Mink's Centurions’ to ‘TBR 101 – Endurance.’

Having helped many riders 1:1 complete their first century, Sharron knew that there was a market gap for a 36 km/h century ride. By assisting first-timers within a pack, the new centurion develops confidence in their own ability, and time and time again, we have seen them go onto regular and longer endurance rides.

We had a structure for our group rides that included various intervals and recovery sessions, the one thing we found that was missing was a fun and supportive 100km ride.

Leaders of the TBR 101 – Endurance Ride include:

“Others include Jason Hurst, Shane Elliott, and Kev Wells. Each remarkable people in their own rights,” James says. “Each week we have Dave Sutton, Jon Stroud, and Mike Angove supporting the rear and entertaining the group with their antics.”

About The Big Ring

Find out more about The Big Ring, TBR 101, and the group’s other rides and races in its Facebook group!