Coach Hunter Allen On the Art and Science of FTP

Did you know that you have the power to improve your power? Power, or your pedaling power, which is measured in watts and displayed in a number as large as four digits alongside a lowercase “w” on-screen every time you Zwift, is arguably the most accurate measure of your cycling performance. More Zwifting is certainly one way to bump up your cycling abilities. But the fastest and most precise way to increase your power is to determine the amount of power that you can currently hold for a certain amount of time, and then to use that figure as a reference point for your Zwift workouts. The metric is called “functional threshold power,” or FTP, and Zwift allows you to determine FTP in an environment free of distractions like cars, stoplights, junkyard dogs—anything that can slow you down, and therefore muddy your data.

“That’s one of the beauties of Zwift,” says Hunter Allen, a former professional cyclist, pioneer in the coaching of cyclists via power output, and founder of the Peaks Coaching Group. “If you really need to work on figuring out your FTP, set up in Zwift and you’re there.”

Allen, who calls FTP “the gold standard in terms of assessing your cycling fitness,” has been coaching athletes in the importance of FTP and training via power for over 16 years. He’s also co-written three books on the subject (his fourth, about training indoors via power, comes out later this year). Allen says that once you know your FTP, you’re able to determine training zones—or ranges of power output—that allow you to work toward specific improvements. Armed with your FTP, you can train to become faster. Or to ride further. Or a combination of the two.

“One of the coolest things about training with that kind of knowledge is that it’s almost a guarantee. There’s no guessing,” says Allen.

So what exactly is functional threshold power? Exercise physiologists frequently use the word “threshold,” and often associate it with the time at which blood lactate (which is a form of salt) accumulates and becomes an indicator of the development of muscle fatigue. Simplified, “lactate threshold,” when expressed in terms of maximum sustainable pedaling power, is “the single most important physiological determinant of performance in events ranging from a three-kilometer pursuit to a stage race lasting as long as three weeks,” Allen writes in his book, Training and Racing with a Power Meter.

No matter what your Zwifting ambitions, here’s how to determine your FTP:

Launch Zwift, and on the “Start” screen, after choosing “Select Workout,” you’ll see “FTP Tests” at the top of the menu of workouts. 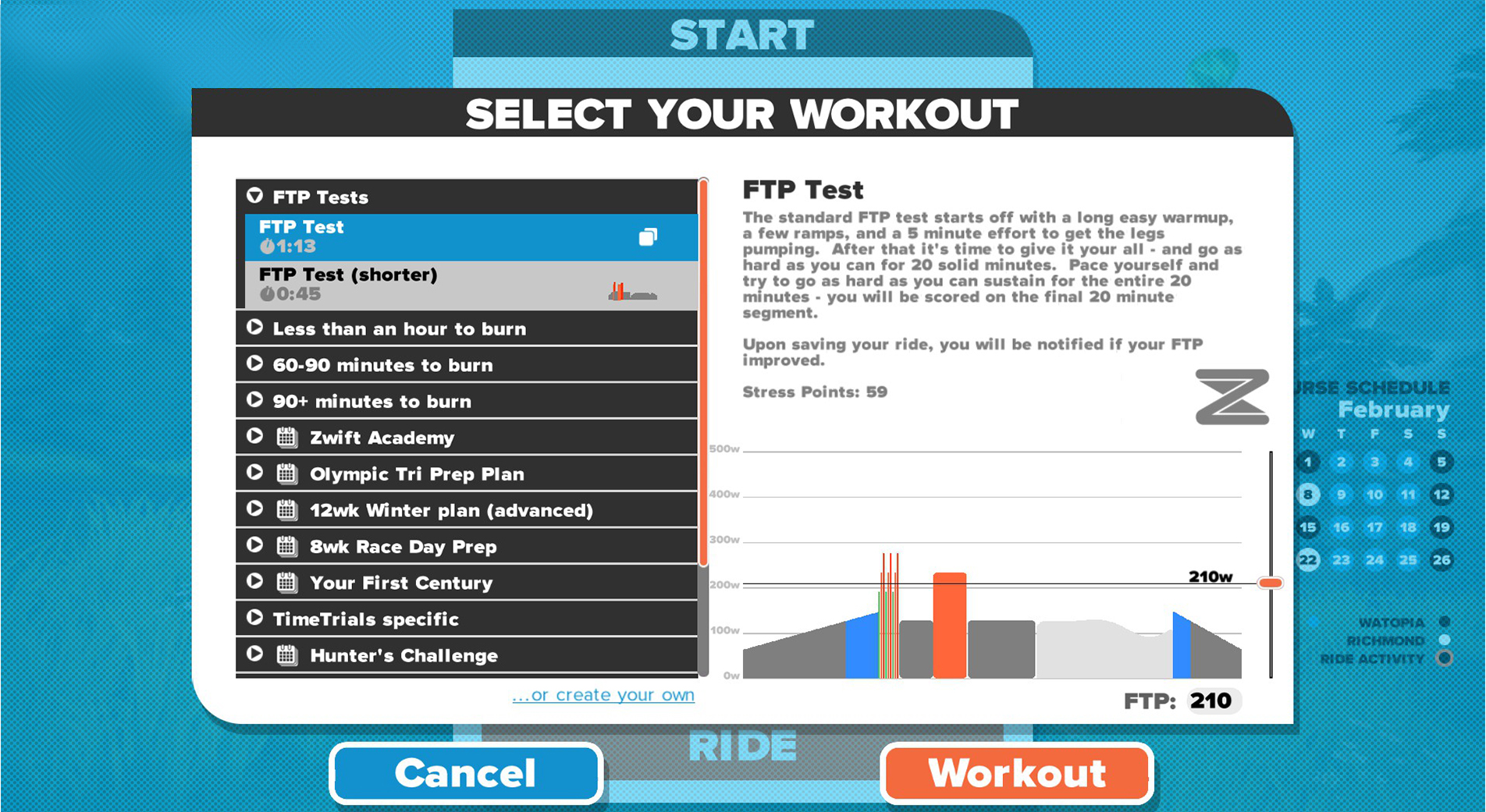 The heart of either test (there are two; 1 hour, 13 minutes; and the other—for the time crunched—lasts 45 minutes) is riding 20 minutes at the highest sustainable effort while on a Zwift-supported trainer (believe us, we support most of them).

Luckily, Allen has some tips for surviving what is a grueling ride:

Upon finishing, Zwift automatically updates the FTP in your profile. 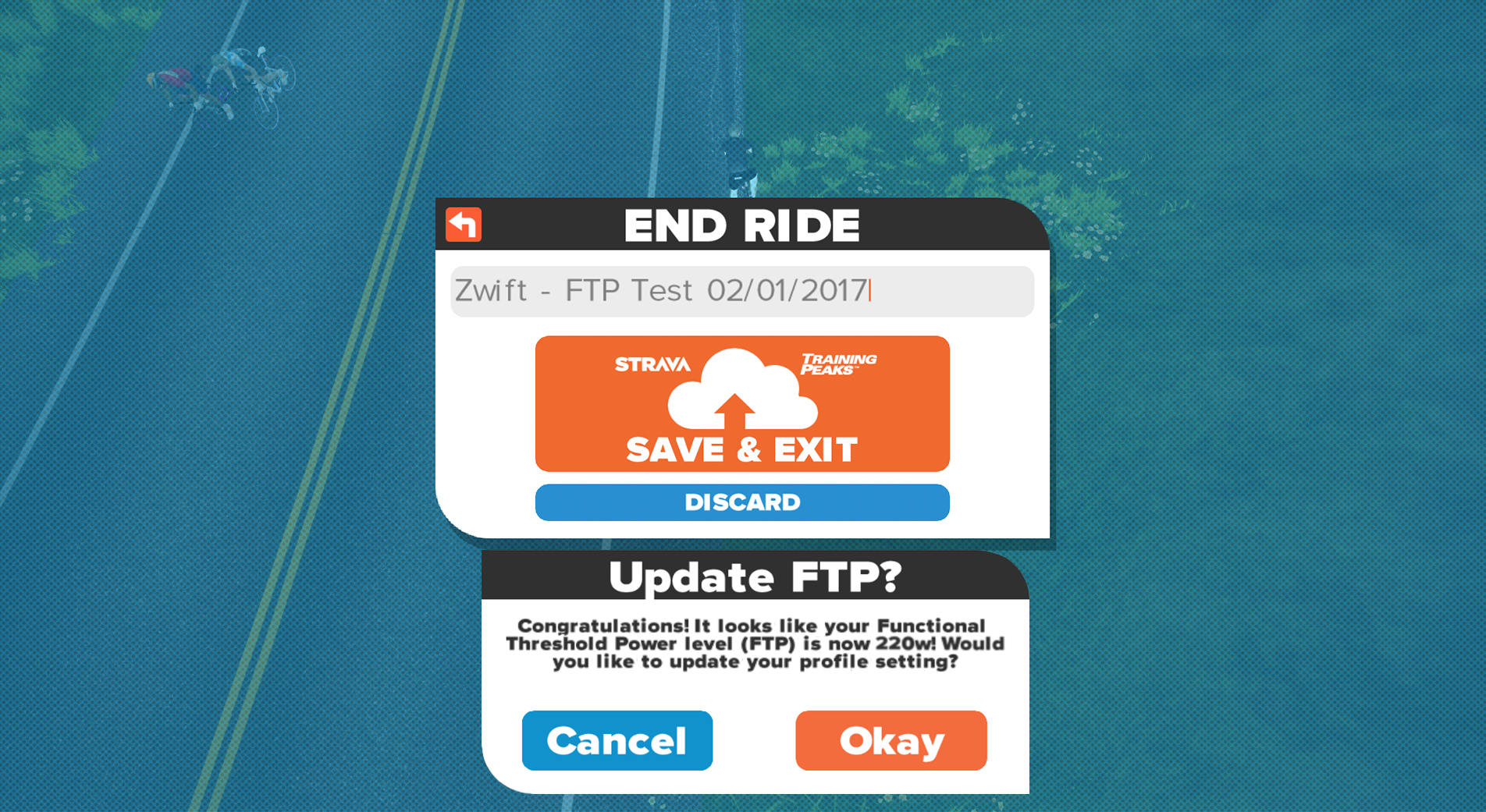 You’re set to train like a pro… or at least a lot like one of Hunter Allen’s clients (check out some of the Hunter Allen workouts incorporated right into Zwift). The additional good news is that, armed with your FTP, your fitness can start to snowball. Stick with Allen’s proven thinking and you’ll want to track your progress by regularly performing FTP tests. Allen says that the occasional 20 minutes of pain is definitely worth the bounty of knowledge.

“Your fitness generally changes every six to eight weeks—so that’s how often you should test,” he says.

Zwift Academy returns in 2017 over 5 years ago