Where is map choice?

A question we’ve heard a fair amount recently is “When will I be able to choose the map I ride on?”  Sometimes the wording is a bit harsher than that, but the point of the question is the same.  The answer is complicated, and it’s mostly why we haven’t talked too much about the subject. Making everybody happy is not possible, and this post certainly won’t be the exception, but our intent here is to shed some light on why it is how it is and give everybody some insight into what is coming.

The road to where we’re at

First I’d like to explain why we’ve not shipped such a feature yet.   From the very start we chose to focus our efforts on a connected experience where you are part of a world populated by others, rather than the typical solution of the day (and now) of having countless courses to choose from, each being a solo or sparsely populated experience.   Soon after that fateful day in 2014 when we opened the doors with our one and only map, Jarvis Island, we saw the magic happen. Riding together, competing for a KOM, sweating alongside your peers across the globe...this was what was going to make Zwift what it is. Even people who couldn’t care less about riding with others still enjoyed being around others, feeling like they are part of a world that’s alive and thriving.    All this on a single map with 3 miles of road.

Of course, almost immediately the feedback started coming in that people wanted to ride Alpe d’Huez, Paris Roubaix, a Kona Triathlon course, Central Park, Col du Galibier, etc.  Initially even some within our then small company (15 people at that time?) also questioned the logic of having very limited map selection. We ultimately knew we first wanted bigger maps, and decided that to divide up our user base into multiple large barely populated worlds would possibly kill Zwift before it even got going.  We needed to keep a critical mass on the map during as many hours of every day, 365 days a year, as was possible. No problem, once the population gets big enough we can have 2 maps live at the same time right?

Yes and no.  Zwift, and indoor riding in general, is a highly seasonal activity and in the summer months the numbers dwindle down. Having multiple mostly empty maps for months at a time could be disastrous for the vitality of the community (and the company), and was something we wanted to avoid.  We could have also added map choice only during peak seasons, but the fallout from Zwifters when they lose the feature in the summer would not have gone well.

So here we are today in 2018 ramping up for winter, and still no map choice.

Are Zwifters comments falling on deaf ears?   Let me explain what we’ve been working on and where this is all headed, then you can decide.   To start with, take a look at this mockup from 2015. 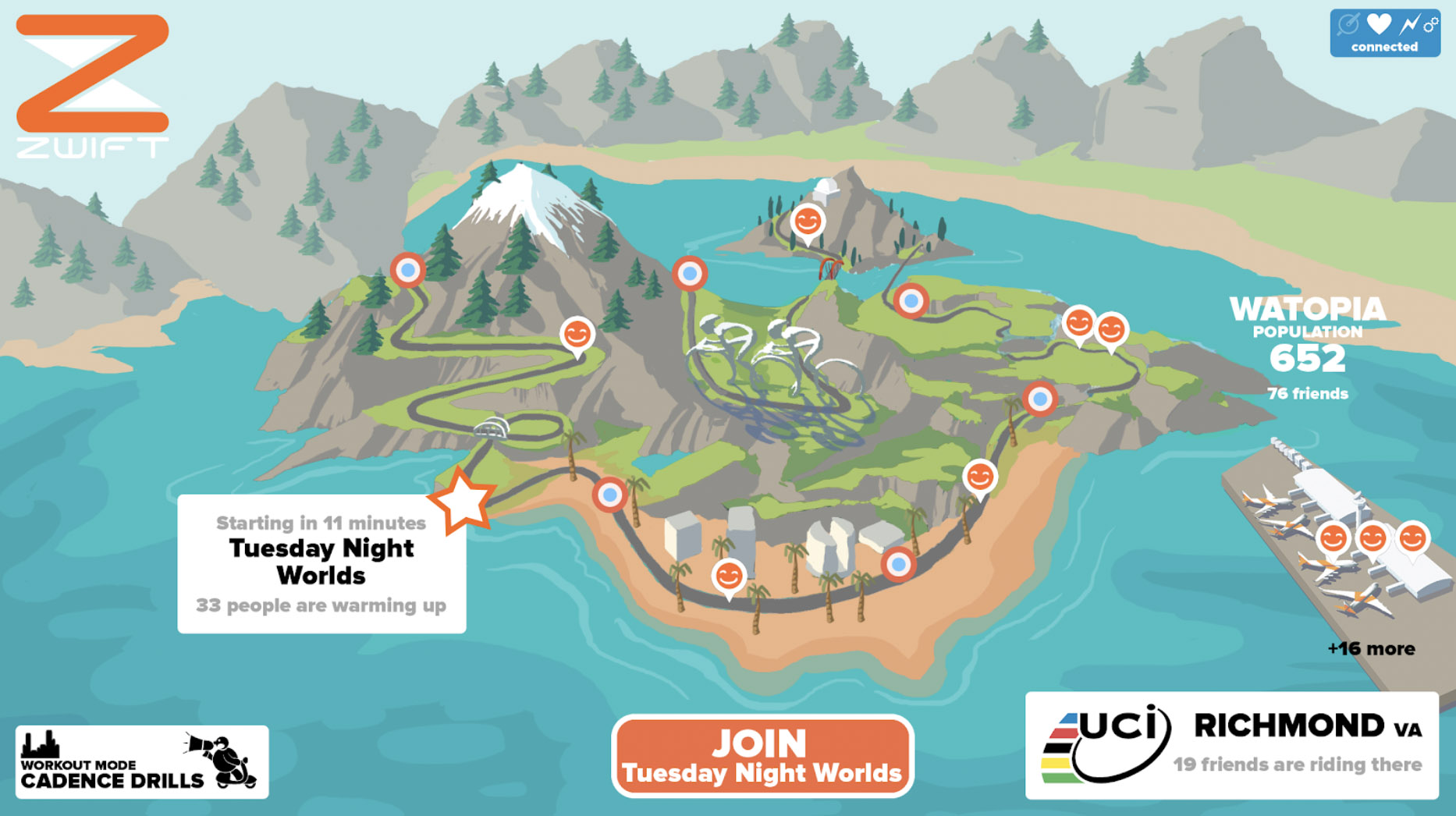 What you are seeing there is Watopia with an airport.  Whaaaaat? That airport would allow you to travel to another map when you were starting your ride.   In fact, many of our social media posts back then included passenger jets in the picture because we’d actually had a 3D airport built as well as some airplanes.

Essentially, the idea was that Watopia would be an always live, always evolving, and ever expanding playground designed from the start for the best indoor riding.  The concept of a “map calendar” that you know today was instead going to be used for our “guest map” (or maps) for that day. Additionally, events, which by their very nature generally have a ‘critical mass’, would be able to be on any map at any time.

This, years later, is still the the idea we believe is the winner.   Watopia has been continuously built out with many routes to become a main hub world (and, spoiler alert, it has a mostly flat expansion coming this winter). The ability to hold events on any map at any time went live earlier this year.   What remains to be finished is the guest map concept and accompanying changes to our user interface.

Those reading carefully will notice that this doesn't mean all maps are available every day (aside from during events/races).  While this is limiting, it enables us to keep making entirely new maps without worrying about having dozens of mostly empty worlds.  With Watopia being a hub it also means our guest maps can be smaller, more experimental, and even seasonal allowing us to introduce fresh rides without having to spend so much time making something that can support 8,000 simultaneous Zwifters.

We’re actively working on this final step of having Watopia + a guest map (or maps), and it’s coming this winter.  We’ve still got some work to do on the user interface for this, and while it’s not quite as cartoony looking as the 2015 mockup above, it’s probably not going to end up too far from it either.

We know there are hours of the day that things now feel crowded. The plan has been to manage congested roads via holding more events on maps other than the map of the day, adding larger and bidirectional starting regions for when players join the world (changed in the most recent update), and having the option to hide certain group ride avatars from the general population of Zwifters in the world (coming this month).  We’ll be trying to do the best we can with these measures before the guest map feature gives us a little relief later on. Keep in mind that these measures will be needed even after multiple maps are live because it is still possible that a majority of Zwifters would choose Watopia (or a new guest map) at any given time.

In the end, we agree with Zwifters that it is time for some variety in where we ride.  We’ve come a long way since the days of Jarvis Island, but we know that Zwift still has a long way to go.  Adapting the Zwift experience over the years in line with the community growth has admittedly been a little tricky at times, especially with the seasonality of it all, but we’re committed to trying our hardest to make Zwift the best it can be.