﻿As part of Zwift Women's Week, we sent an email out asking all of our female riders to tell us in 140 characters or less, "What does Zwift mean to you?" The answers flooded in. They were heartfelt, funny, brave, surprising and powerful. This week, as part of the festivities, we'll share the stories and sentiments of the women of Zwift. Be prepared to be inspired.

"In your 40s you’re told it’s too late to chase dreams, overhaul your life, and start over,” says 45-year-old Alison Kubota, who began her adult life focused on career and providing for her parents. “But I was never one to believe any of that.”

Sure enough Kubota, who has a PhD in chemical engineering and Zwifts aplenty inside her San Francisco, CA home when she’s not riding and racing outdoors, has pivoted impressively—and numerously—in life. She’s worked as a scientist and consultant at Lawrence Livermore and Sandia national laboratories. She’s modeled exotic derivatives for New York investment banking company Goldman Sachs. Now Alison works for a Berkeley, CA medical startup and, with her father well-situated, she rides her bike—on and off Zwift—as much as 14 hours weekly. Alison found cycling, and ultimately Zwift and racing, following great sadness over the passing of her mom in late 2012.

“I got my health back, and then Zwift was part of this whole cycling community, and it all reinforced itself,” she says. “When I say that Zwift has given me life, I really do mean that.”

Now Alison loves to perform her extensive interval work on Watopia’s volcano course, and then puts down the power in her races—she recently won the Valley of the Sun Stage Race as a Category 4 competitor in Phoenix, AZ.

“All I want is to be stronger and better,” she says.

Miranda is one of those very talented musicians that also happens to love math and data, which ties into her passion for Zwift. “I’m definitely in that part of the Venn diagram,” says the 53-year-old violinist, who has considerable experience both playing in orchestras and teaching the Suzuki method. She’s also dedicated to her bike. Following a running injury, Miranda turned to cycling and then (late last year) to Zwift, and she’s completely hooked.

Living in snowy Nelson, British Columbia, Miranda rides daily, tracks her rising FTP (functional threshold power, which indicates how hard you can ride for an hour), and in general loves to compete against herself all over Watopia. Then when she’s done riding, and her 14-year-old daughter needs no more tending (the older three kids are out of the house)? “I spend my discretionary time online looking at smart trainers and carbon-fiber bike frames,” says Miranda. “The only question is, which one do I buy first.” 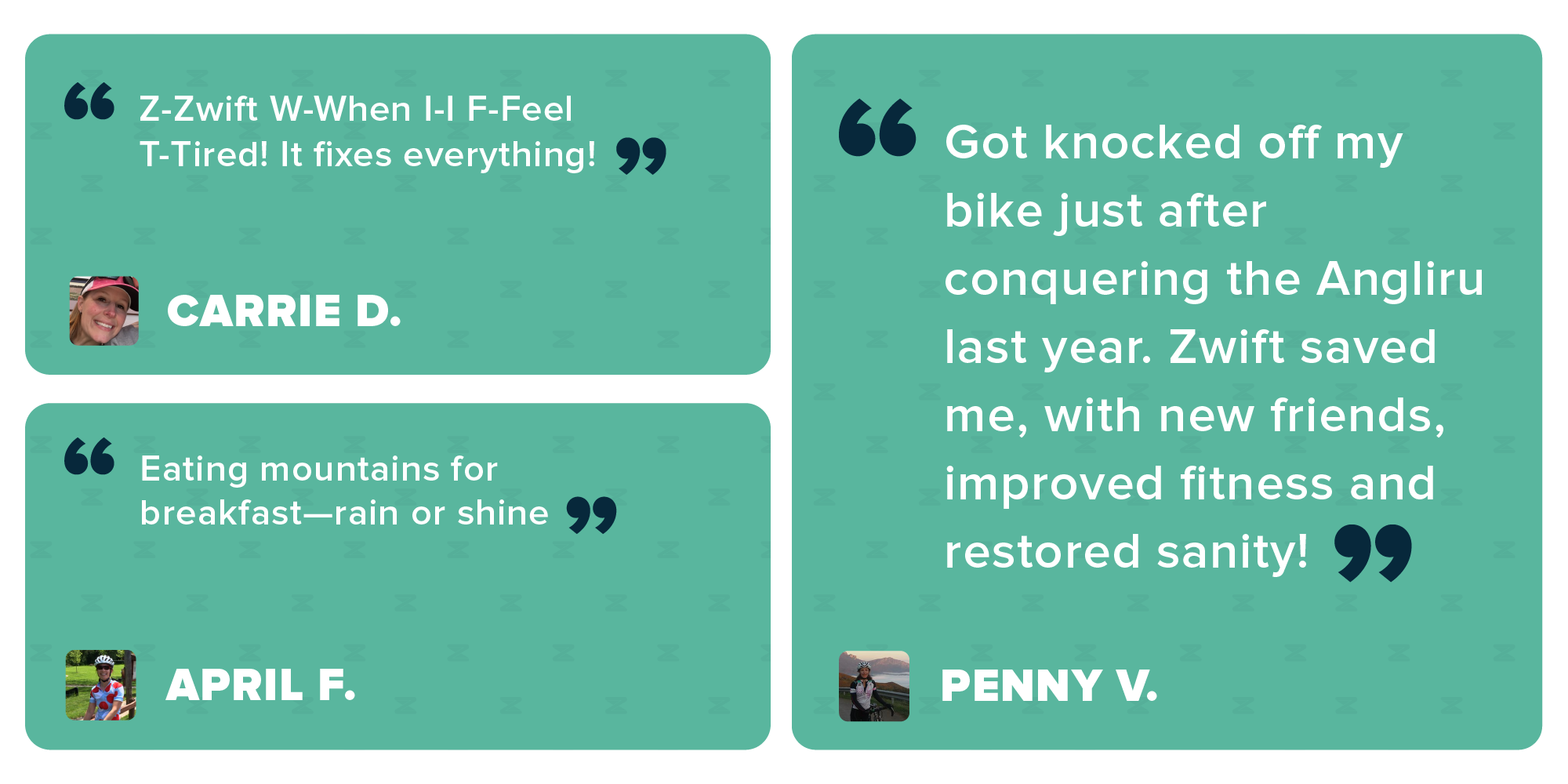