Greg Leo is racing his bike wearing the face of a lion.

The big cat’s face is printed on a bandanna tied around his forehead, keeping the sweat out of his eyes. When a camera turns toward him, he stays focused and pulls the lion’s eyes and nose over his own.

Leo is competing on Zwift on an indoor trainer. As he reveals his face again, a playful smile appears.

Get Leo, 33, really talking about racing and a more serious, thoughtful side comes out. He and fellow Team Draft member Adam Zimmerman co-host “In the Pens,” a podcast dedicated to Zwift racing. Leo’s professional life gives him a unique look into how racers interact and the choices they make.

When it comes to strategy, Leo has done his homework. And these days, he assigns it. 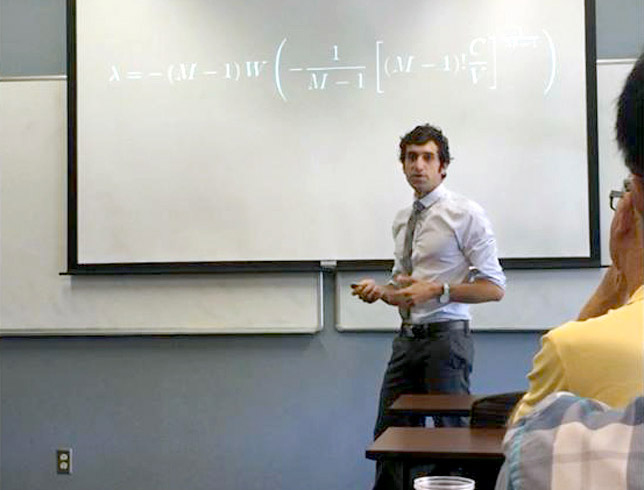 Leo, who has a Ph.D. in economics, is a professor of economics and game theory at Vanderbilt University in Tennessee. Game theory is the study of strategic interactions, and bike racing is full of them.

For example, Leo describes a race where someone attacks a group alone with 3 kilometers to go.

“If no one responds to take up the chase, [the attacker] will stay away. But whoever takes up the chase will burn matches and likely lose anyway,” he says. “The group desperately needs someone to take action, and yet everyone in the group wants someone else to do it.”

In game theory this is called the Volunteer’s Dilemma, where a whole group will benefit if one member pays a price.

Theoretically, larger groups have a harder time finding a volunteer, says Leo. The more people there are, the less willing each person is to volunteer because they expect someone else to do it.

“What kind of group do I want to attack from? All else being equal, maybe it’s a slightly larger group,” he says. “That’s the theory, but then there’s the reality of Zwift.”

The game changes if some competitors are not racing to win. If they are part of a team, racers may volunteer to help teammates who have a better shot at victory. And if there are enough strong riders willing to work, a group that’s too large can go much faster than a small one, because they shelter each other from the wind.

Leo says things usually move too quickly in a bike race for him to solve problems on the fly. But he is comfortable with these situations because he has seen them before. Experience helps him find the right moment to pounce. 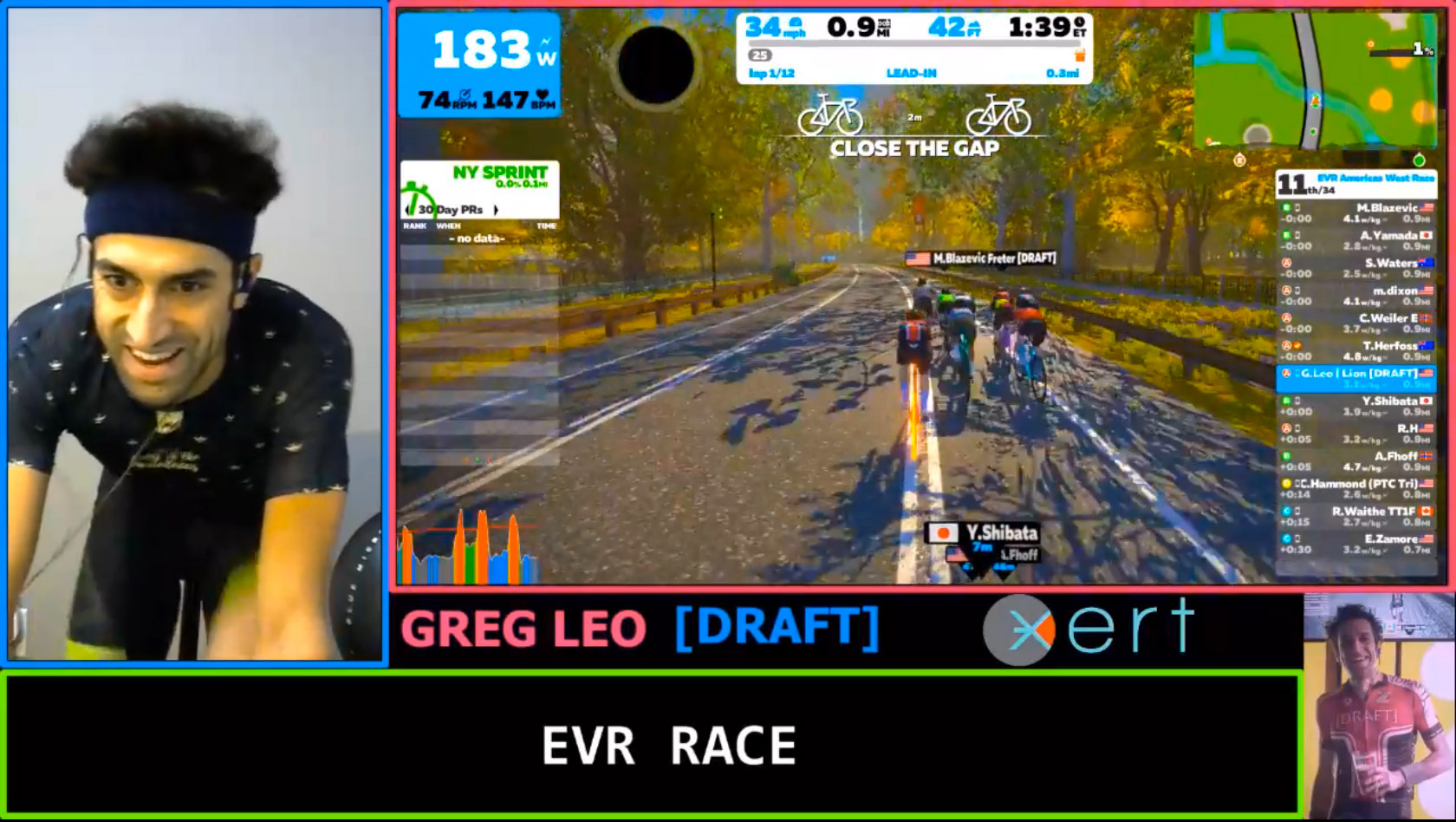 “The start of a Zwift race is very fast – you might say unnecessarily fast,” Leo says. “Why? Because we believe it’s going to be.”

Another game theory scenario explains this. In the classic Prisoner’s Dilemma, two prisoners are questioned separately about a crime, and investigators offer them a deal. They each can choose to betray or to stay silent, but they don’t know what the other will choose.

“We (as prisoners) would kind of both like to cooperate and stay silent,” Leo says. “But if you were to do that, I could implicate you, so that I don’t spend year in jail. You have the same incentive.”

By each choosing to betray the other, the prisoners don’t get the best outcome, but they avoid the worst punishment and may even have a shot at freedom.

A similar scenario plays out on Zwift, Leo says. Even if racers want to start easy, if anyone starts fast, the ones who don’t risk being left behind. Each person makes a choice in their own self-interest, based on what they think other people will choose. This creates what’s called a Nash equilibrium.

“Once we’re in this situation, we have no incentive to do anything but go fast,” he says.

Leo likes the hard starts, while others dread them. He says racers can break this equilibrium only if they agree as a group – or if organizers can force a slower rollout.

Leo raced both, winning the KISS points competition with his knowledge of strategy and a ferocious sprint.

The Olympic Games, held in Atlanta in 1996 while Leo was living there, inspired him to start mountain bike racing as a junior.

He was drawn to “the colorful clothes and the personalities – [downhill mountain biker] Missy Giove used to wear a dried piranha around her neck.”

In college, Leo moved on to other sports. He competed for several years in freediving, which is essentially competitive underwater breath holding. When he heard that professional cyclists have low resting heart rates, he thought lowering his own heart rate might make him a more efficient freediver.

Leo bought a used steel Marin bicycle, and once he discovered group rides he was hooked.

“I absolutely love the social aspect of road cycling,” he says. “You can start a ride as strangers and end up friends just a few hours later.”

Leo still keeps up with the friends he made on the roads around the University of California, Santa Barbara, where he attended graduate school. 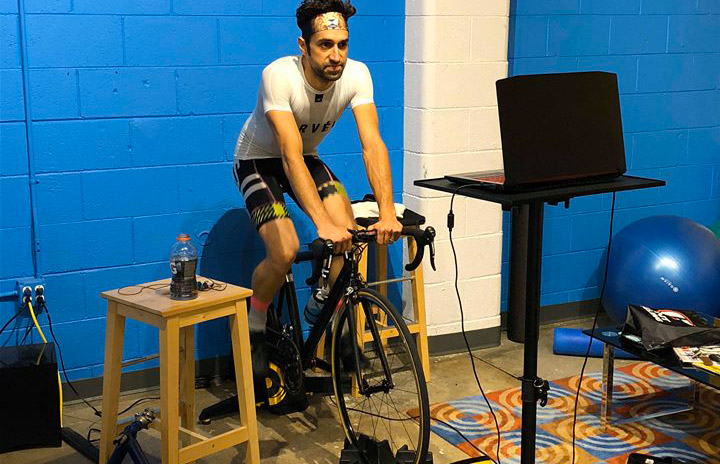 While he now focuses on Zwift racing, Leo continues to ride outside. His main outdoor goal is to compete in the Single Speed World Championship.

“Zwift has made me a much stronger cyclist outside,” he says. “In two years of Zwift racing, I've moved well beyond what I used to think was possible for me.”

Leo says he and his wife, who have a 1-year-old child, appreciate the flexibility, low risk, and convenience of racing and training indoors. He keeps his Elite Direto trainer, bike and streaming gear in a dedicated Zwift studio in his East Nashville home.

When Leo first signed up for Zwift, the game was still in a beta test phase. He began riding regularly when he discovered virtual races, and he has now finished more than 300 of them.

While all this competition may sound intense, Leo likes to keep things fun. When training starts to feel like a chore, he ignores his power meter, workout plan, and race analysis and does something he enjoys on the bike. This could mean racing casually with teammates, exploring the local area, or even cleaning his chain.

He has his own ways of reducing the stress of big races, like playing a “character” in live events.

Still wearing the lion bandanna, Leo launches an attack, followed by a triumphant roar. He has just crossed the line in first place in a stage of the CVR live race. His on-camera interviews are a mix of confident swagger and laid-back playfulness.

“Putting on this character and trying to be entertaining helps me relax and take my focus off purely performing well,” Leo says. “I become ‘The Lion.’” 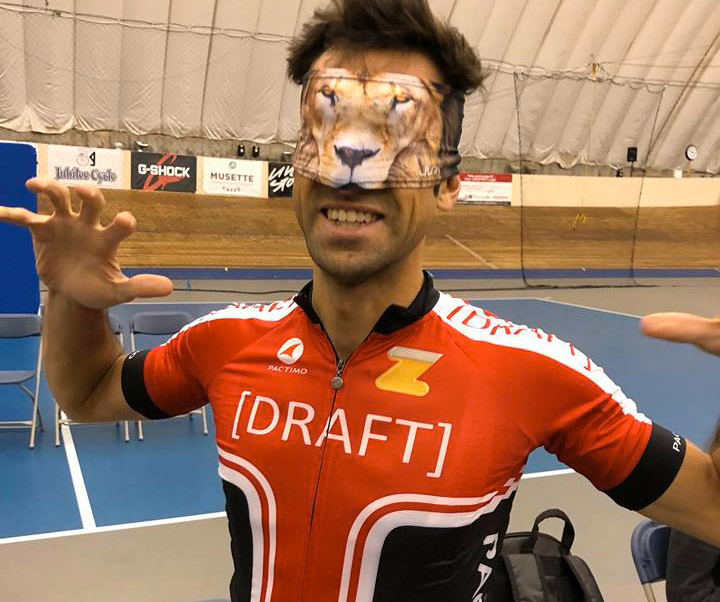 Ann Sloan over 4 years ago