The Hilly Route was Watopia's first, and it is still a favorite among racers. The mix of punchy climbs, rollers, and flat sections keeps things interesting lap after lap, and the final sprint is both fast and technical.

What follows is a detailed look at key sections of this route from a racer's perspective. USA Zwift champ Adam Zimmerman has generously offered some pointers, so get ready to learn key strategies for achieving your best results when racing the Hilly Route.

Races on the Hilly Route are typically four laps long, with top A racers finishing in approximately fifty minutes. The route features mixed terrain including punchy climbs, rollers, flats, and a twisting descent. Timed lap, KOM, and sprint segments can create a "race within the race," but be sure to pace yourself and recover whenever possible so you can push hard when it counts. 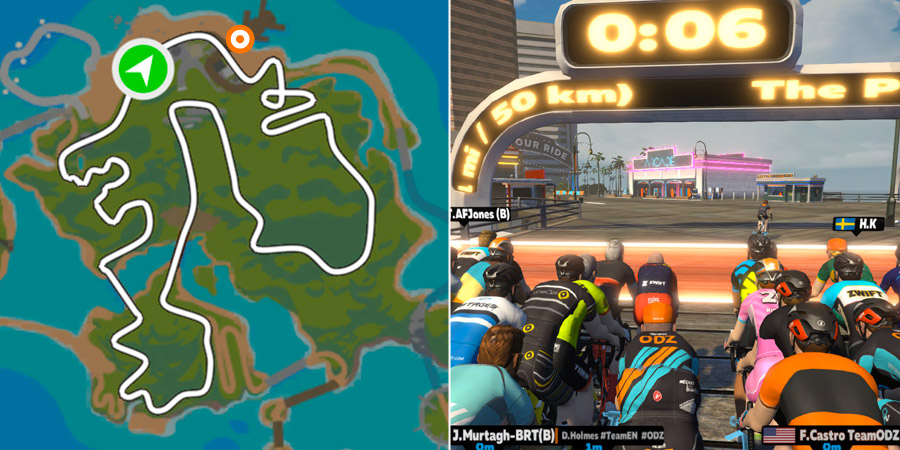 Adam says, "A solid warm-up is essential as you go into the KOM in the first couple of minutes. I'll sometimes try and have an elevated HR while sitting in the pen just to keep my legs and mind ready for the fireworks."

Races on the Hilly Route often start a bit tamer than flat races since riders know the hard effort is coming quickly on the KOM segment. Still, it is wise to go into your race nicely warmed up and ready for a fast start on the fairly flat ~1km of tarmac leading into the KOM. Got a van or aero powerup? Consider using it here to take the edge off the hard start. 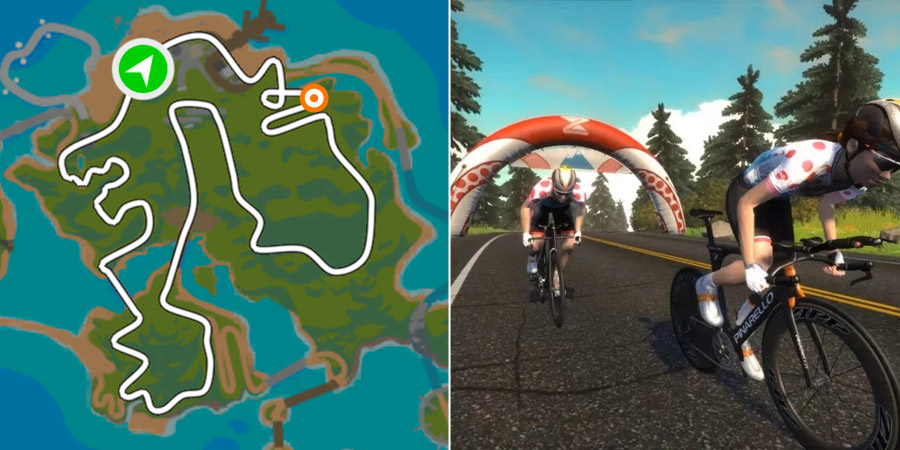 Adam says, "It's a false flat heading into the KOM banner so it's important you do not let off the gas until you actually start going downhill. This is pivotal in smaller groups." He adds, "A break can stay away from this climb because many riders will come close to their max HR."

The timed KOM is undoubtedly the most important section of any race on the Hilly Route. Stay with the front group up this climb and you should have the power to hang with them for the rest of the race. Lose the front and chances are you'll never see them again!

This section divides into four subsections. The first portion is the steepest, covering roughly half your KOM distance and elevation. Use your feather powerup here for maximum effect. Next, the road flattens on the left-handed hairpin; keep your power up to build and maintain speed into the rest of the climb. The second half of the climb comes next, slightly less steep than the first but no one is recovering because everyone is (still) suffering! Finally, the climb eases into a false flat finish where you will want to keep your power up and hold a wheel as your group gains speed over the top. 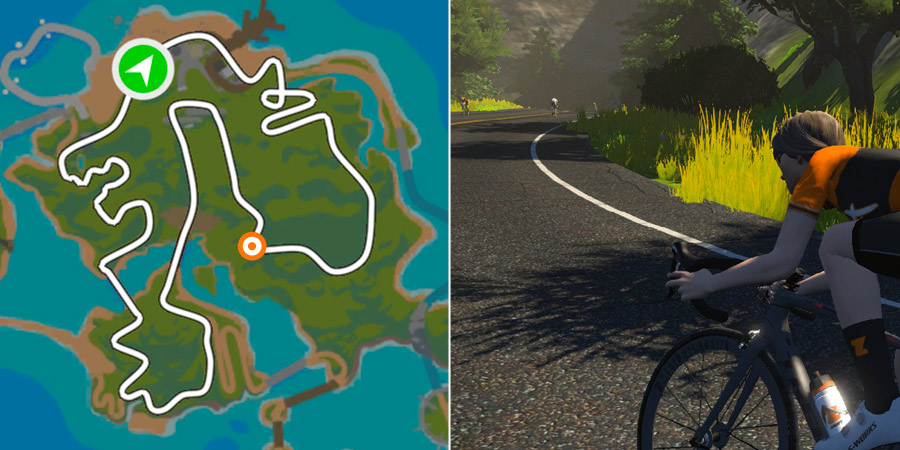 This short bump surprises many since it is hidden as you approach. Use the element of surprise to attack off the front or put in a dig and make the catch. Increase your watts heading into the sharp right then keep your power high over the top and into the descent.

#4: Bump Before the Village 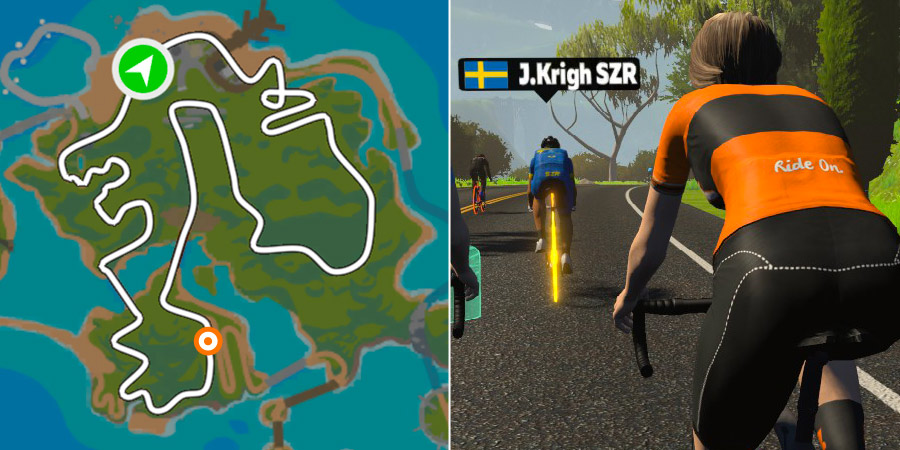 Adam says, "...no big moves can be made here, because of the short punchy hill before you hit the Esses."

This small bump before the Italian Villas can drop you off the back of a group quickly if you aren't staying attentive. Be prepared to keep your power up for this over this bump, but conserve your energy for the bigger Esses ramp coming soon. 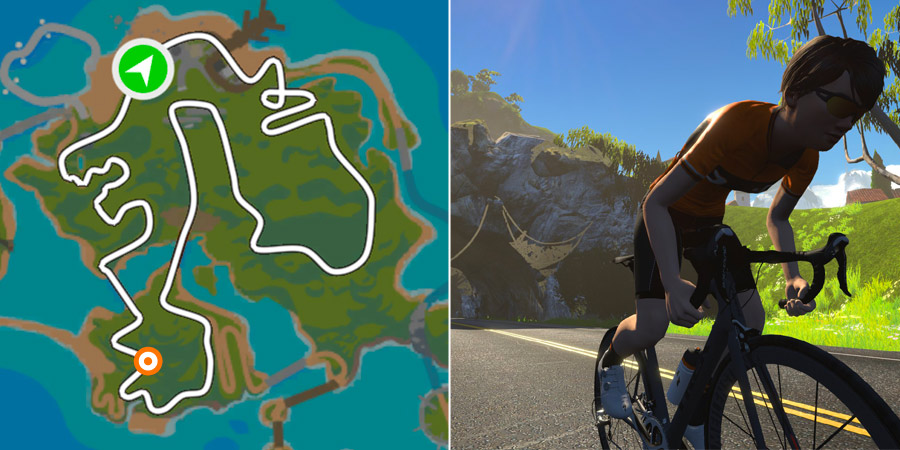 Racers typically keep an even pace over the sprint segment, unless the race is awarding sprint points. If your race is factoring in sprint times be sure to hit the start line at full speed to give yourself the fastest possible time. 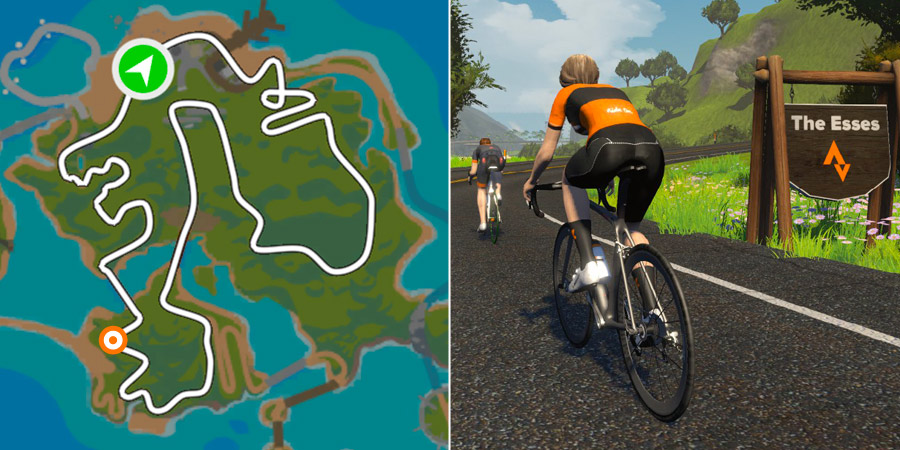 Ride through the sprint banner, cross the bridge, and get ready to hammer up the short kicker leading into the Esses. Adam says, "A small break will usually be brought back here because a lot of riders will attack hard up the hill."

This section sees hard attacks on final laps as climbers and long attackers put in last-ditch efforts to distance themselves from sprinters in the pack. Keeping your power up over the top is crucial as the short downhill which follows lets you pick up speed quickly. 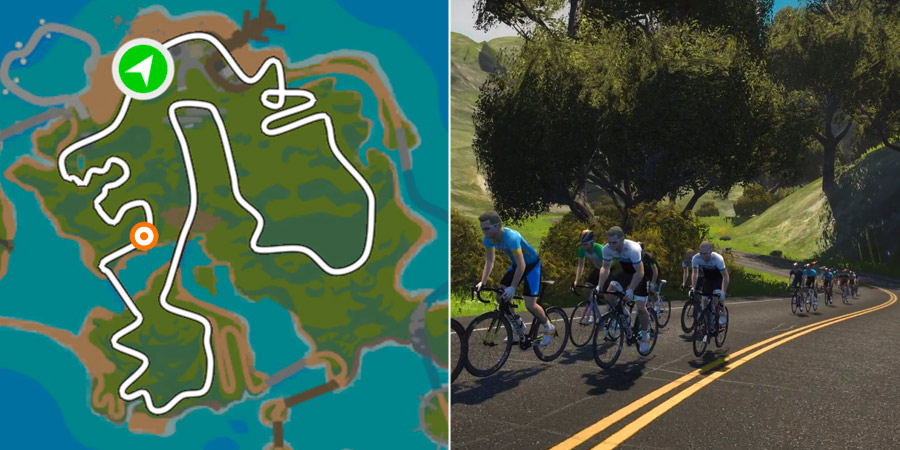 Adam says, "During the Esses and the flat section through the start/finish you need to do your best to recover as much as possible before you hit the KOM again."

This section of rolling curves always adds excitement to a race as riders work to hold a wheel over a roller coaster of gradient changes. In the final lap, a pure sprinter is wise to conserve energy here--but you must do so while holding the wheels of those attacking from far out. 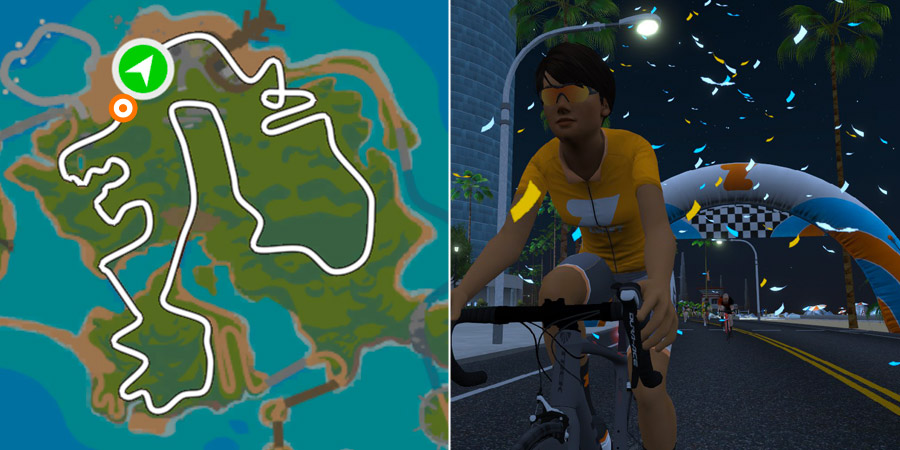 Make no mistake about it: the finish is fast. But don't pop that aero helmet powerup too soon: the short descent is followed by 300 meters of flat sprinting, so timing is crucial.

Adam says, "This sprint finish is fun and exciting but requires perfect timing. I've gotten it wrong many times but I've also nailed the timing perfect. If it's a slow group coming into the last 300m I would suggest making a move before anyone else does from the back to catch them off guard, especially if you are a long sprinter. If you are a shorter punchy sprinter I would wait for the third wheel at 250m to make your move."

We hope you've enjoyed this Race Recon post. The goal of this series is to explain the features that make each Zwift route uniquely challenging for racers. Next, take a look at a flat favorite: London's Classique!