Watopia Flat is a favorite for racers who prefer a flatter route profile. While most races on this route end in a pack sprint, vigilance and sweat are required if you want to hang with the front pack over the bumps and false flats to the finish.

What follows is a detailed look at key sections of this route from a racer's perspective. Top racer Justin Purificati has generously shared some pointers, so we know you'll enjoy this quick tour full of useful tips for top results when racing Watopia Flat.

This is how Justin explains what makes Watopia Flat special:

"There aren't any significant climbs so it gives more opportunity for traditional race tactics to come into play. While overall speed tends to be high, there are still sections of flats, rollers, and undulations that allow for opportunities to launch attacks and break up the group. A little different than the hilly routes where the race typically gets decided on the climbs by the climbers. It's more inclusive to the general population of cyclists." 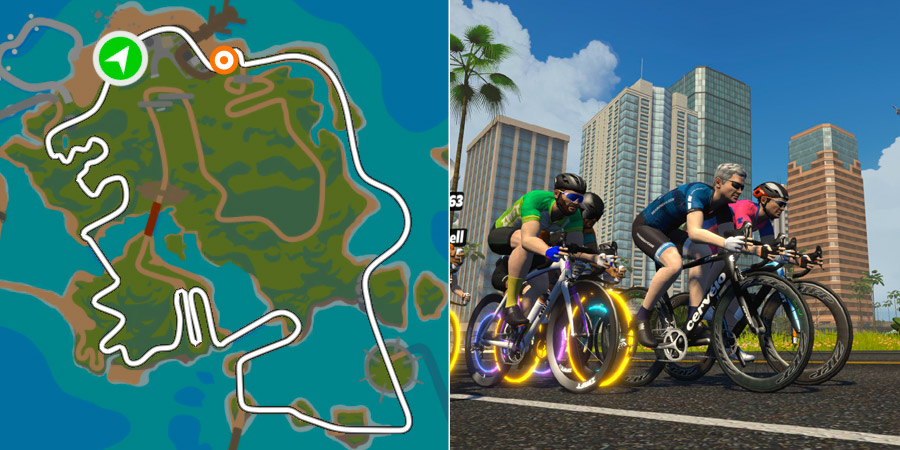 The start is as flat as you'll find on Zwift, but it is also fast as the strongest riders work to create a selection. If you're barely hanging on, don't blow up early. Find a wheel you can hold, and use the pack's draft to your advantage.

An aero helmet or van power-up can help take the edge off the fast start, which typically settles down after 2-3 minutes. 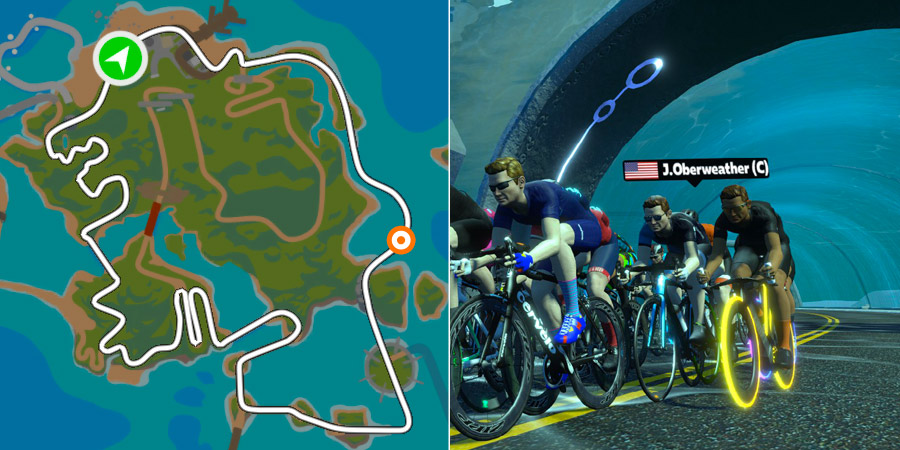 If the start has you gassed, grab a wheel and follow Justin's advice: "This is your chance to sit in and catch your breath. Get on a wheel, stay in the draft and get your heart rate down. Alternatively, you can attack while everyone is trying to rest."

#3: Climb Out of the Tunnel 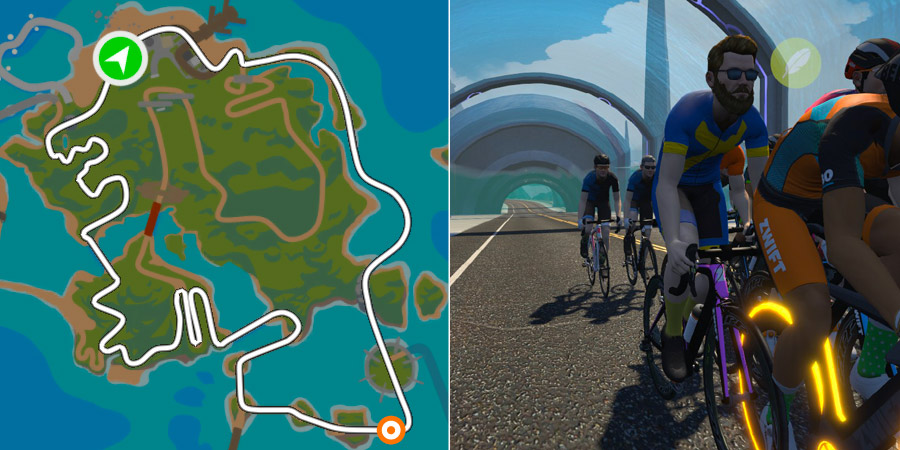 When the road makes a hard right, be ready for a short, hard effort. Every lap! Justin says, "Be at the front of the group, and start your acceleration just before the start of the climb. It may only be 300m at 3%, but if you are not paying attention, you may find yourself lagging behind. Match the effort of the riders around you and hold it until you're up and over and back up to race speed."

Got a feather power-up? Use it here, or save it for the climb into the Esses. 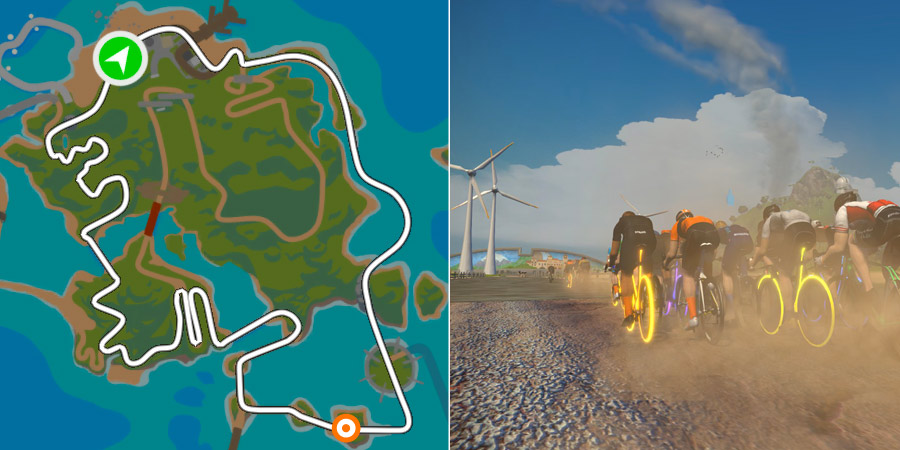 Justin says, "Pay attention to any gaps that may have formed on the climb out of the tunnel. Visibility disappears and you can barely see the rider in front of you. Be well-positioned to stay in the group, and keep an eye on the rider board and everyone's w/kg and time gaps to you. Match what everyone else is doing and you'll be fine. It's the perfect place to launch a sneak attack and get a gap on the group."

Riders often get dropped here when they burn a match climbing out of the tunnel and can't sustain the effort into the fishing village. As Justin advises, mind any gaps forming ahead and watch that rider list if visibility is impaired.

#5: Climb Out of the Fishing Village 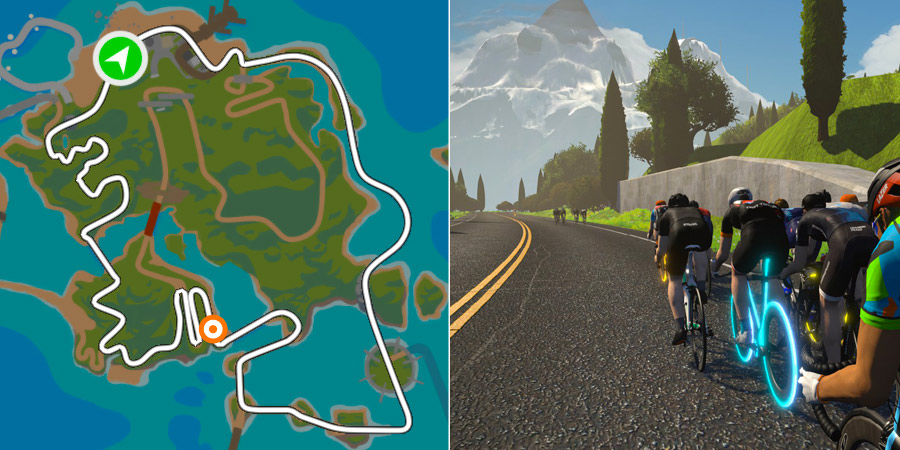 The slight grade of this section will bump the group's wattage up, and riders attacking may force a response as well. Justin says, "A false flat at 1% for 1.9km, means the pack will slow down enough to give riders the idea to attack the group. Be attentive, and if you're feeling good, it may be a good chance to get away with a couple other riders."

Ride within yourself, and if you're struggling grab a wheel and do your best to stay in the pack. The refreshing waterfall of the Italian Villas is coming up soon, just hold on! 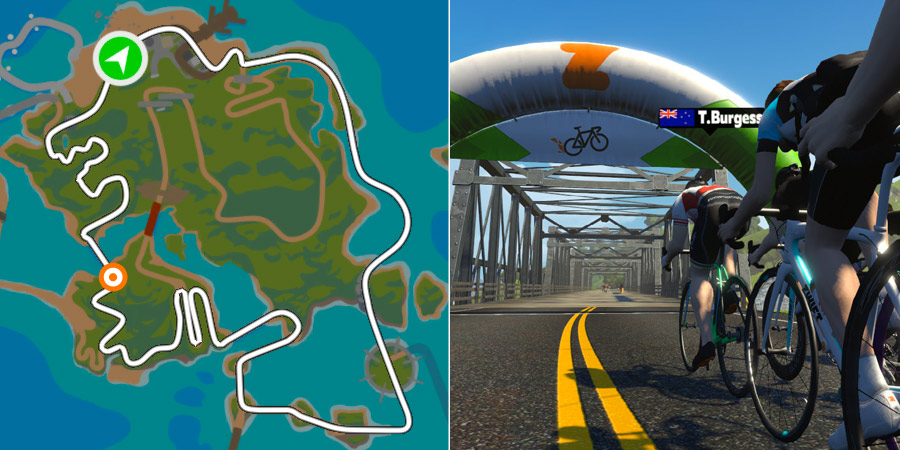 Justin says, "This section is important because you're carrying speed from the Villas and it's setting you up for the Esses. Stay in the draft of the group and try to position yourself in a manner where you'll be moving forward through the group, and near the front at the sprint banner."

Racers typically keep an even pace over the sprint segment, unless the race is awarding sprint points. If your race is factoring in sprint times be sure to hit the start line at full speed to give yourself the fastest possible time. 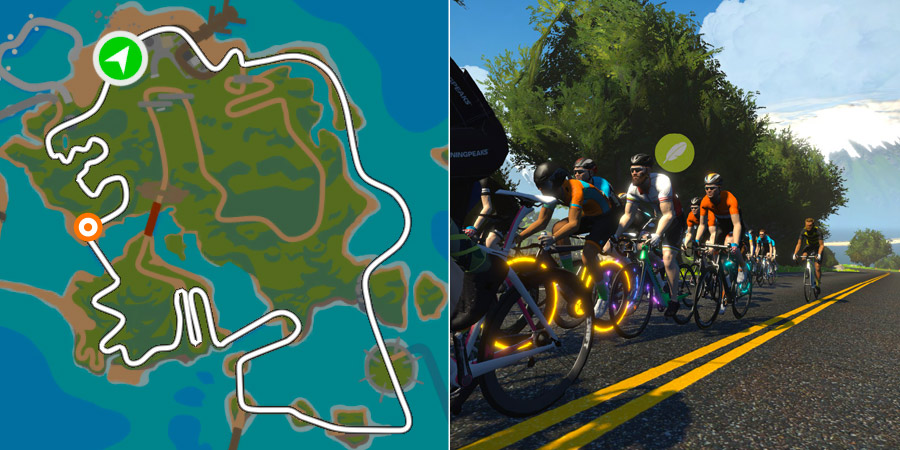 This section sees hard attacks on final laps as climbers and long attackers put in last-ditch efforts to distance themselves from sprinters in the pack. Justin says, "The climb averages 4.5% for 300m with a maximum of 6%. You want all the speed you can get going into it. The faster you're going, the shorter and the easier the effort will be. I highly recommend doing a slingshot from the back of the group, to the front of it going in. Dig into the orange numbers, use the feather if you have it, and don't stop until you're into the descent." 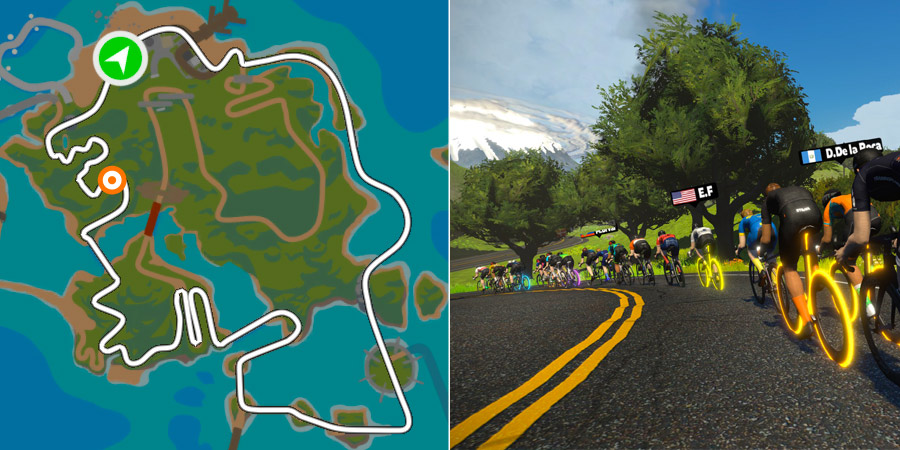 This section of rolling curves always adds excitement to a race as riders work to hold a wheel over a roller coaster of gradient changes. In the final lap, a pure sprinter is wise to conserve energy here--but you must do so while holding the wheels of those attacking from far out.

Justin says, "This section of rollers is tricky. Very difficult to get away, but easy to get left behind. It's all about carrying speed. The group will accordion through here. Ideally, you want your speed to carry you forward while accelerating into a roller, and back going down the other side. Just treat this one like a quick over/under interval session. Be mindful of the size of the group and don't ease up too much in-between. Stay in the draft and in the accordion or the pack's momentum will leave you behind." 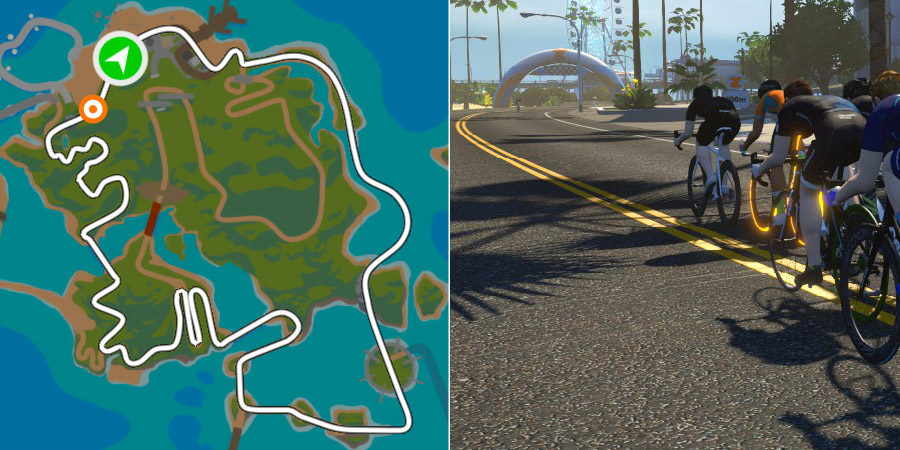 Justin says, "Coming out of the Esses, there's a good 600m of false downhill at 2%, before the final 300m of flat to the banner. The pack will be going fast, but you'll want to position yourself. You don't want to be at the front, but not at the back either."

Timing and position are crucial in order to maintain the momentum needed to win this sprint finish. As Justin explains, "The person that wins the sprint isn't the strongest sprinter, it's the fastest rider with the best timing. You want to come into the sprint with as much momentum as possible. The faster you're going before you sprint, the faster you will be coming out. That being said, you don't want to be the first person to open it up, unless you have a powerhouse sprint like Greipel. You want to be behind a wheel that you can hang onto during the sprint. If you are batching their power while in the slipstream, you will go faster than they are, and eventually come around them. It also doesn't hurt to have an aero power up here."

We hope you've enjoyed this Race Recon. The goal of this series is to explain the features that make each Zwift route uniquely challenging for racers. Previously we looked at Volcano Circuit CCW. Be sure to read that post for more tips!