In our final blog post for Zwift Women's Week, we hear a common theme. Zwift women have a lot on their plates. They are master multi-taskers who successfully balance all of life's responsibilities because they also prioritize their own happiness and wellness.  When life gets busy, Zwift gives them a healthy, encouraging, competitive space, all to themselves.

Leading up to the celebration of Zwift Women's Week, we sent an email out asking all of our female riders to tell us in 140 characters or less, "What does Zwift mean to you?" The answers flooded in. They were heartfelt, funny, brave, surprising and powerful. This week, as part of the festivities, we're sharing the stories and sentiments of the women of Zwift.

Be prepared to be inspired.

Mountain bike racer Jacqueline Maney has a comeback recipe for you. Take off exercise for about 18 months around the natural birth of your child. Then enter a criterium—a hard-charging, short-circuit road race that turns about every competitor breathless.

“I had zero training,” says Jacqueline, who lives in northern Iowa and works full time for tech company GoDaddy. “I got last place. But it was fun, and I knew it was a beginning.”

And so 33-year-old Jacqueline, with the help of Zwift, restarted her mountain bike racing while happily raising her daughter of 19 months, Josephine.

Often around 8:45 or 9 p.m. on many nights of the week, Mom hops onto Zwift. The baby monitor comes along for the ride, but frequently Jacqueline, who is currently training on Zwift via an FTP-builder (functional threshold power) workout plan, loses herself while pedaling.

“I love the volcano circuit,” she says. “I’m always waiting for the lava to pour onto the road and devour cyclists.”

Jacqueline is already building on legitimate success. Last year, as a Cat 2 racer, she won the Iowa Mountain Bike Championship Series, checking on Josephine while zooming through each lap by looking for the thumbs up from her husband, Michael. Jacqueline is looking forward to the 2017 IMBCS, and is also signed up for 2017 events in Colorado and South Dakota.

In other words, Jacqueline is back!

“Zwift makes me happy,” she says. “I can be the same person that I was, but with more stuff on my plate.” 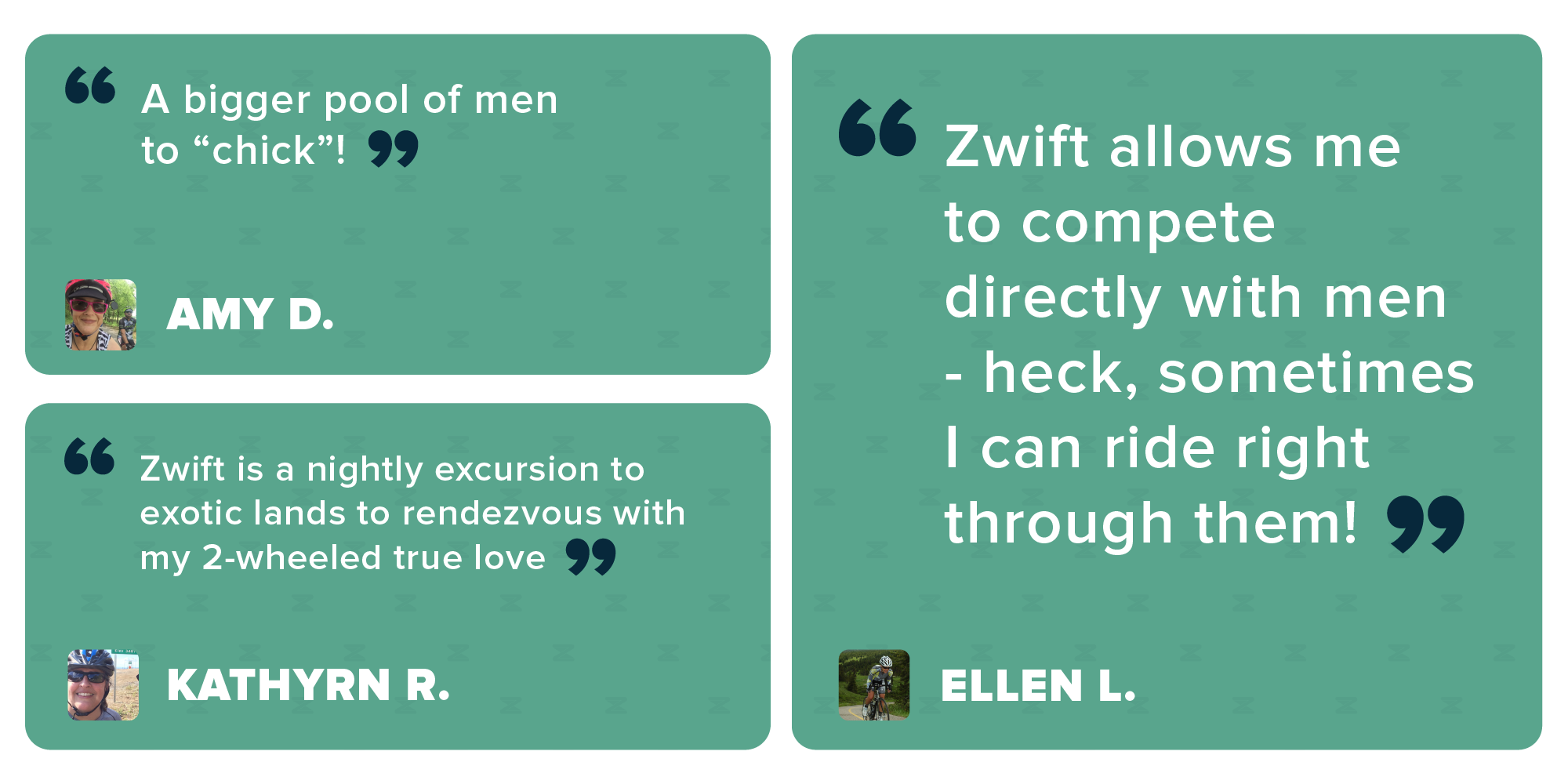 Liesel Prentis says that she—along with a friend who also has four children—belongs to a distinct group called Moms on the Run, but don’t let her humor or the name mislead: When Liesel isn’t managing everyone else’s life, her world is bike-centric. The 42-year-old, one-time and current competitive athlete is a dedicated Zwifter.

“My Watt Cave is my happy place,” Liesel wrote to us via email from her home in East London, South Africa. “I don’t have to have any title other than “Cyclist” while I’m on my bike.”

Liesel drops off and picks up her kids from four different schools. She hauls her two teenagers to sports matches, and tends to the play date needs of her two younger children (ages 3 and 6). How can we forget the part-time job? Liesel is a financial manager at a construction-equipment business.

But when it’s Zwift o’clock, everything revolves around Liesel, her husband Ken, and their cycling. The two of them frequently enjoy quality indoor riding time together, even while their two little ones orbit mom and dad, riding their bikes in the generous workout space.

“We want to be an example to them with our cycling,” writes Liesel, who fits in several weekly Zwift sessions. “We can already see them slowly gaining interest.”

Mom won’t be easy to catch. After a childhood spent BMX racing, Liesel re-discovered cycling, along with Zwift, a year ago. Now she appreciates how Zwift helps her to train methodically. Liesel has three off-road stage races on the calendar.

“Zwift has enabled me to be competitive, and to be part of a sport that is growing exponentially in South Africa!” writes Liesel. “I just love it.”

Ride with Ivan Dominguez and Rahsaan Bahati over 5 years ago