Get your gravel fix with the Road to Ruins route. While it begins in Watopia's city center, racers will soon find themselves exploring a Mayan Jungle complete with rope bridges, waterfalls, and the ruins of a lost civilization. Wave hello to the sloth as your group passes beneath his vine, but keep in mind you'll need to be moving much faster than he is to win this race!

What follows is a detailed look at key sections of this route from a racer's perspective. Former UK Zwift national champion Cassie Baldi has generously shared some pointers, so we know you'll find this quick tour's tips useful when race day arrives!

This loop features two decisive, medium-length climbs. Pacing yourself properly on these sections while using the group's draft on descents and flats is essential if you want a shot at the podium.

So give everything you've got to stay with your group up the Seaplane Climb as it splinters the peloton with its short, steep start. Then recover during the jungle descent so you can push hard as you climb out of the ruins. Hold a friendly wheel as you descend to the fishing village, then choose when to go all in. Trying the long breakaway, or waiting for the sprint? You decide! 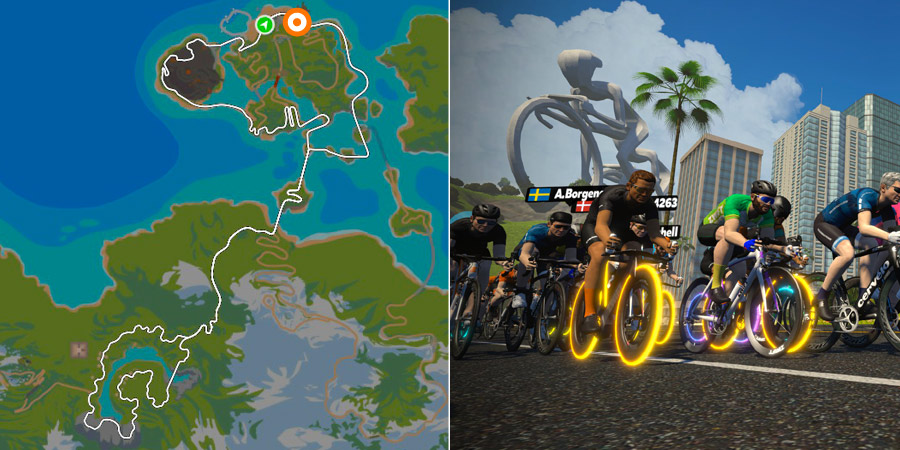 Expect a fast start and be warmed up before the race begins. With some climbing down the road riders will probably not push the pace too much here, so sit in and conserve your effort while you can.

Cassie says, "Like most races, it is important to start hard and try to get into a fast group."

#2: Climb Out of the Tunnel 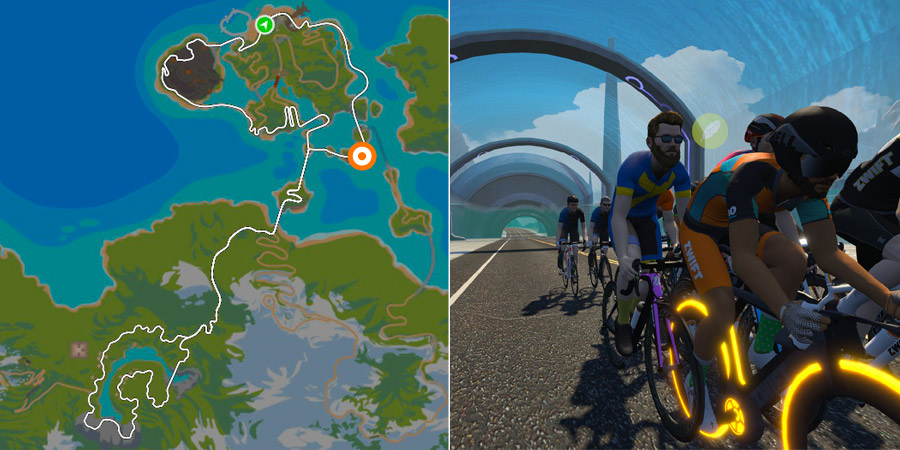 Cassie says, "You will need to kick hard to stay with the group; it isn’t a max effort but almost a test to see who has the legs to attack the longer and steeper climb later." 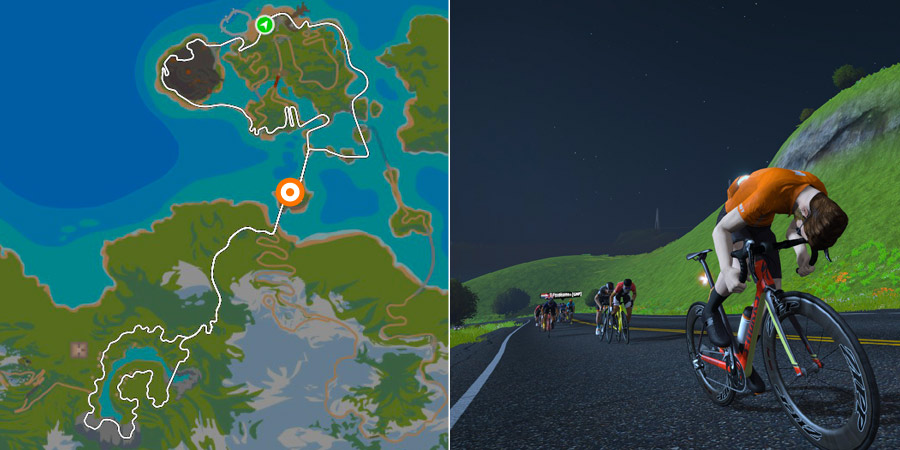 As you pass the seaplane docks you will see this climb looming ahead. Cassie says, "With a maximum gradient of 10%, this is an important point of attack. You can gain a lot of time over this steep climb and really break up the group with a close-to-max effort before getting to the flatter section over the bridge."

This is where the race begins to break up, and those breaks are only solidified by the flatter (and longer) climb to follow. Position yourself near the front, use that feather power-up, and be ready to go hard if you want to remain at the front. 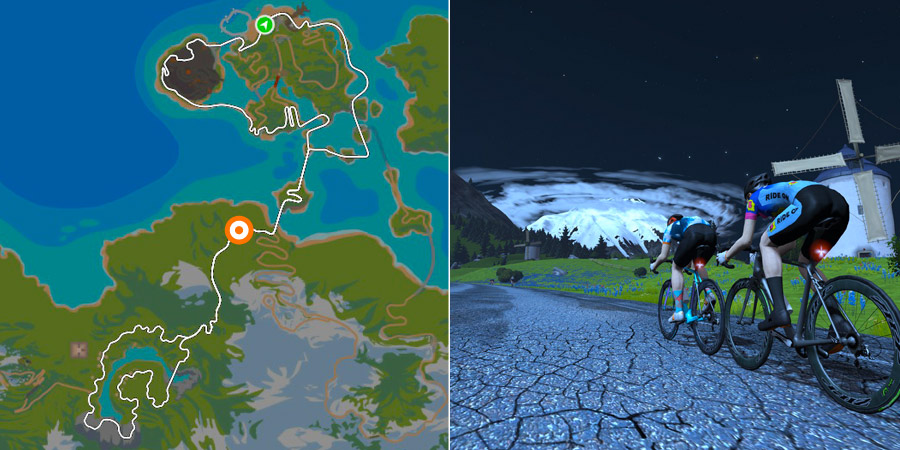 The hard seaplane climb transitions into a flatter climb that doesn't let your legs recover. It begins with a bridge, then you hang a right through the level gate and climb up toward the jungle. Cassie explains, "The bridge is where the riders will settle into smaller groups before the subsequent climb into the Jungle Loop. It’s much more of a steady climb, followed by a fast descent, so not really worth putting in the effort only to get caught on the descent. Don’t relax, however, and make sure you keep up with your group."

If you got gapped a bit on the seaplane climb it's well worth putting a dig in here to catch a group ahead so you can benefit from their draft for the long descent to come. 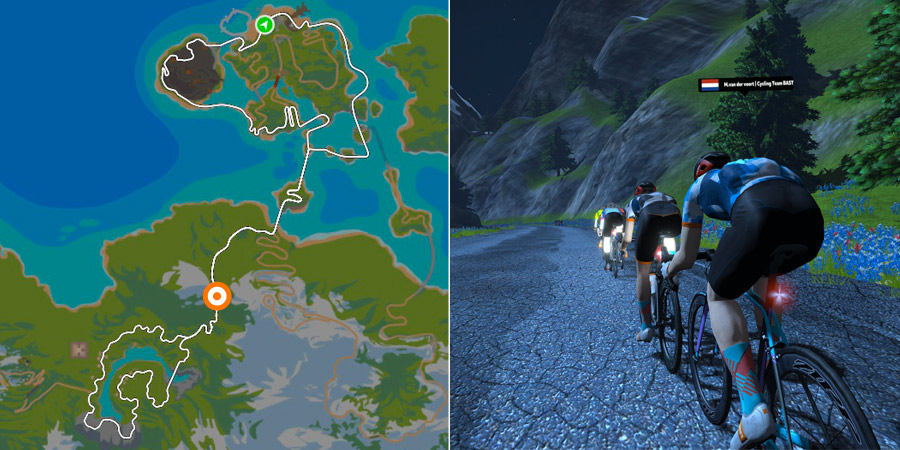 Time to go fast! Cassie says, "It’s a shallow 3% descent but fairly fast, so a good place to catch the group if you’ve fallen behind. However, if you’re in a Double Draft race, the group will descend much quicker than a lone rider! No sense in attacking here but you can get dropped in Double Draft."

Enjoy the long descent, but you'll be climbing back out very soon so hang with your group and spin those legs to recover. 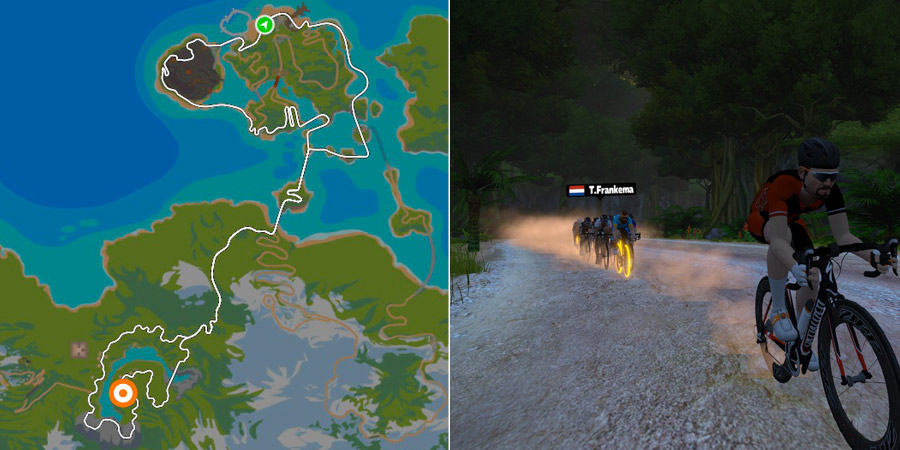 Cassie says, "It’s not a steep climb, only 3%, but it can be very fast; riding with a big group, it doesn’t even feel like a climb. It has undulating parts, so it’s really difficult to take much time here and not worth the extra effort required. Again, however, you can easily be dropped if not paying attention."

With only a 3% grade even non-climbers can hang on through this section if they can keep the power up for the duration. If you're struggling be sure to hold a wheel as the draft still makes a substantial difference on faster climbs like this. 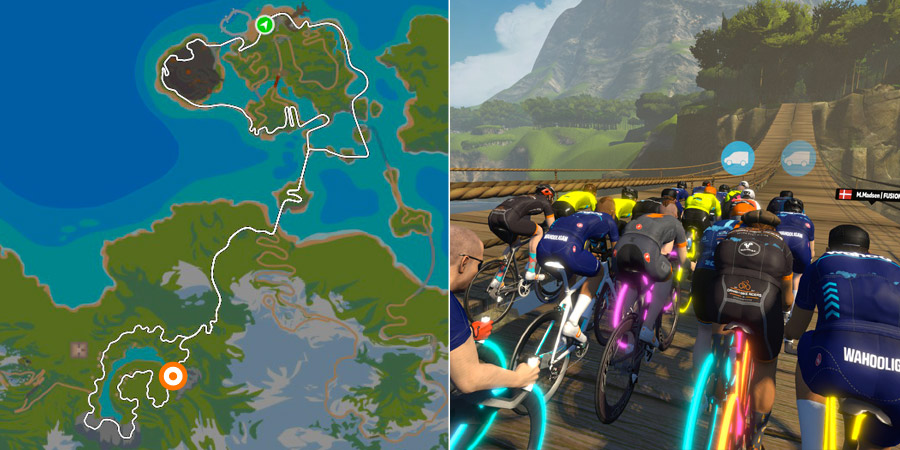 Don't look down! The rope bridge is one of the most striking visuals in game. Riders will attack when the bridge turns up, so mind the gap.

Time your effort here for maximum effect. Cassie says, "As you descend the first half of the bridge, you can start ramping up the power to give you a slingshot for the second half, which is a short and steep uphill section. Depending on the race situation and on the state of the rider, this can be an excellent place to attack and split the group but make sure you don’t relax too much over the top."

#8: Climb Out of the Jungle 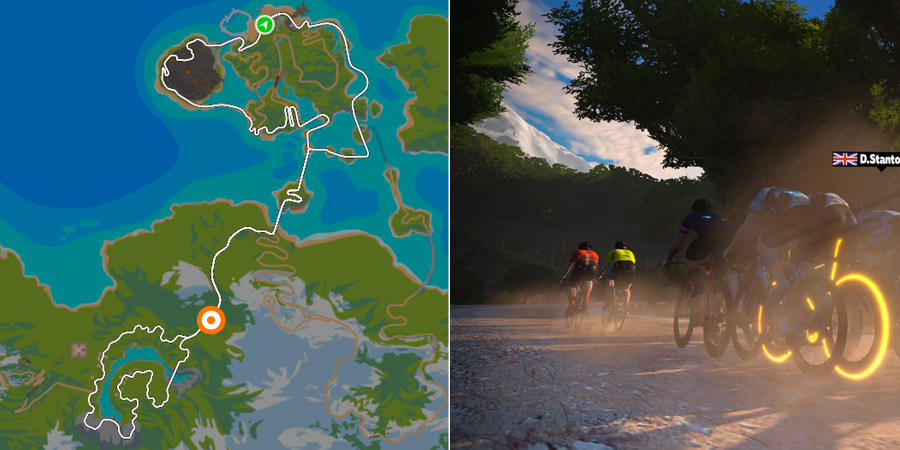 Cassie says, "This is a really important part of the course when racing; it isn’t very steep but it is fairly long. If you are able to push hard, you can gain a lot of time before the steep and fast descent to the seaplanes. Riders may be tired and you can break them here if you feel the timing is right." 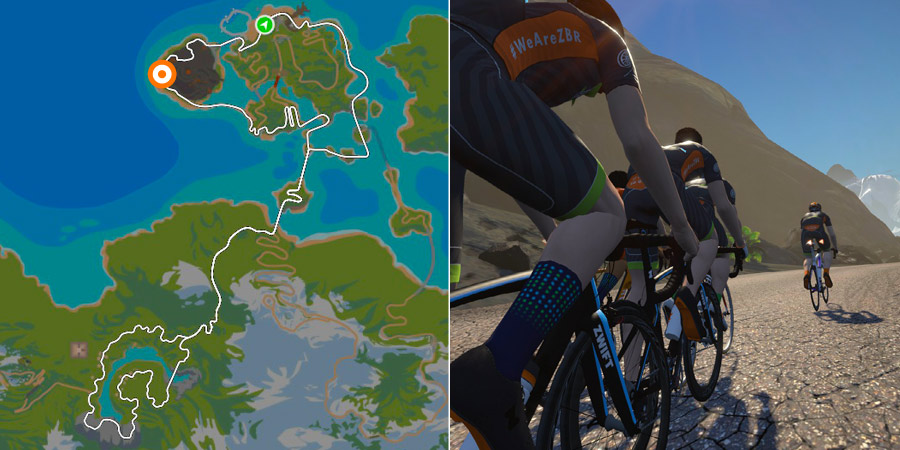 Watts will jump into the orange numbers on this short bump, so try to start near the front of the pack and don't let yourself get dropped off the back. The short false flat following this ramp means you may need to keep your power up for another ~30 seconds until the group descends into the volcano.

If you're a climber, Cassie advises, "This is the last and most important kick, if you are a climber like me and don’t want the race to come down to a sprint. This is a max effort but there is no break on the other side: the road flattens immediately afterward but then has a shallow uphill section where you can get caught if you’re not able to kick again." 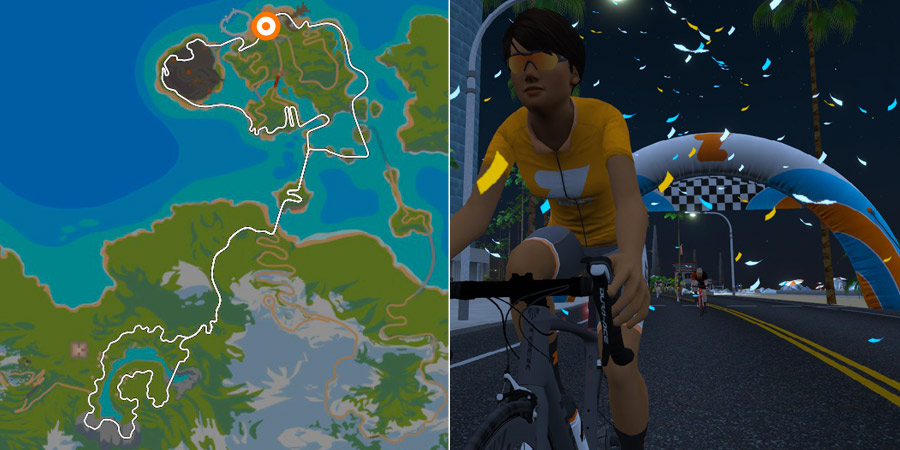 Cassie says, "After the volcano, it’s mostly flat into the finish. It’s a tight left corner where you can get caught out if you’re not holding on to the group and then it’s a slight downhill to the finish. Any sprint is normally from around the 300m sign before riders lose the momentum from the descent."

Make no mistake about it: the finish is fast. But don't pop that aero helmet powerup too soon: the short descent is followed by 300 meters of flat sprinting, so timing is crucial. Surf the wheels as long as you can, then give it everything you've got to the finish!

We hope you've enjoyed this Race Recon. The goal of this series is to explain the features that make each Zwift route uniquely challenging for racers. Previously we looked at Watopia's Flat Reverse. Be sure to read that post for more tips!