A sprinter's favorite, our Greater London Flat route covers most of the Classique but includes a loop through greater London. Enjoy the sights as you race through Trafalgar Square, past Buckingham Palace, and along the Thames!

What follows is a detailed look at key sections of this route from a racer's perspective. ZwiftPower creator and experienced racer James Hodges has generously shared some pointers, so we know you'll find this quick tour's tips useful when race day arrives!

Races here begin with a rolling lead-in to the sprint banner on The Mall which marks the start/finish of each lap. Your first lap begins when you cross this banner 3.5 miles (5.7km) into the race. Note the distinctive red pavement as you pass Buckingham Palace, then wave hello as you descend past Big Ben and pedal along the Thames.

Most of this loop is quite flat, but just after the tunnel you'll find Piccadilly Rise. Stick with the pack up this hill and you should be able to hang for the entire circuit.

Most Greater London Flat races are two or three laps in length. If you can position yourself in the front group over the rises and attack at just the right time you may have a shot at the podium. Don't go too early on that final sprint, and use your aero power-up if you've got it! 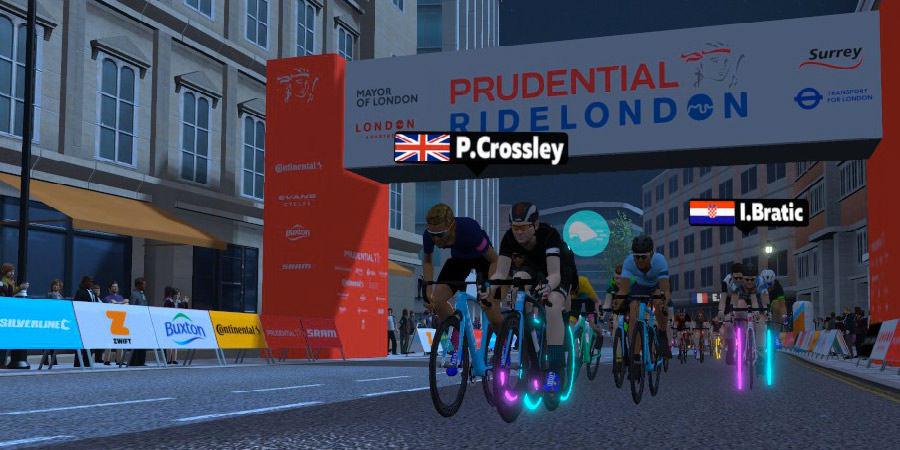 You'll want to be warmed up before the race begins since racers will push hard out of the gate to create early splits. This is done to prevent weaker riders from sitting in the strong riders' draft throughout the race.

James says, "Due to the rolling/uphill start this race tends to be single file until the tunnel, with a high risk of splits forming. Experienced Zwifters will ignore any solo attacks after this point, conserving energy for the challenge to come." 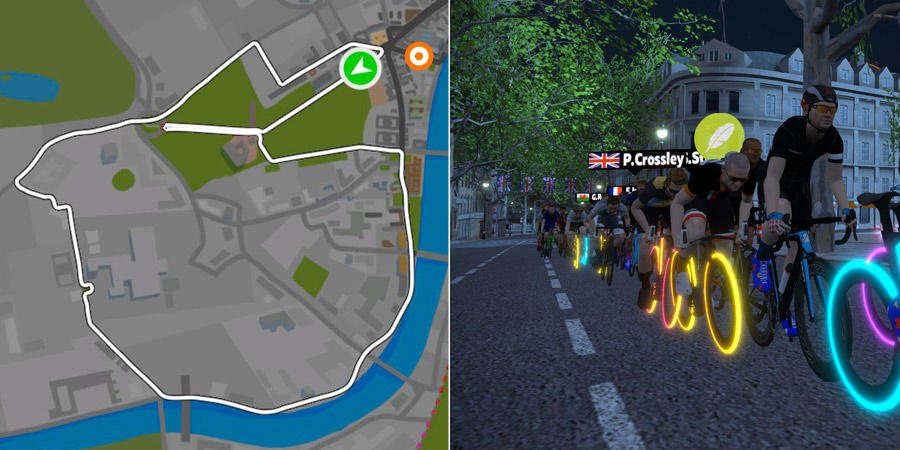 When the group makes a hard right away from the Thames be ready to punch it up Northumberland Avenue and maintain power over the crest until you are comfortable with your position in the pack.

James explains, "The top racers throw down 10-12wkg trying to force a split. Fight your way to the front immediately and sit on someone's wheel. Expect a few riders to push hard through the turn at the top." 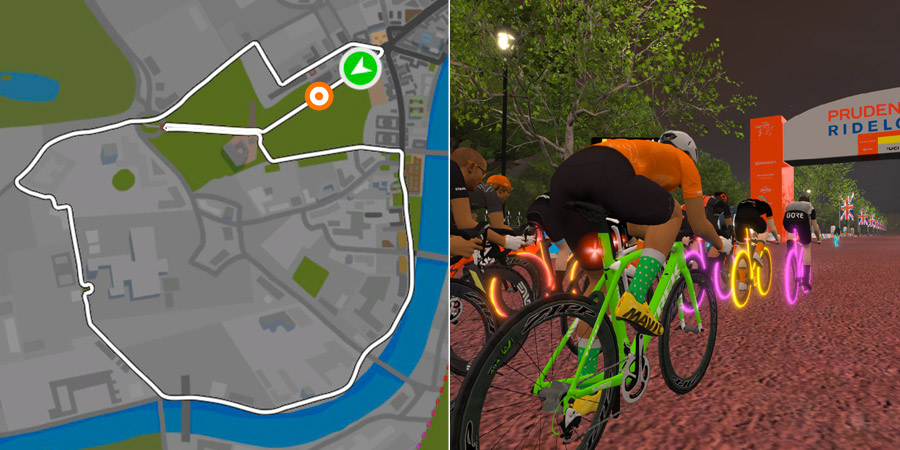 James says, "There is almost always an attack here and they mostly fail. Be alert, however: the main purpose is to shell riders not paying attention."

If your race awards intermediate sprint points then timing is key here. The actual sprint section may only be ~10 seconds long, but you can see the banner from far away and riders will jump early. Grab a wheel for a leadout, using your van or aero power-up for max speed. Enjoy the slightly downhill sprint--it's fast! 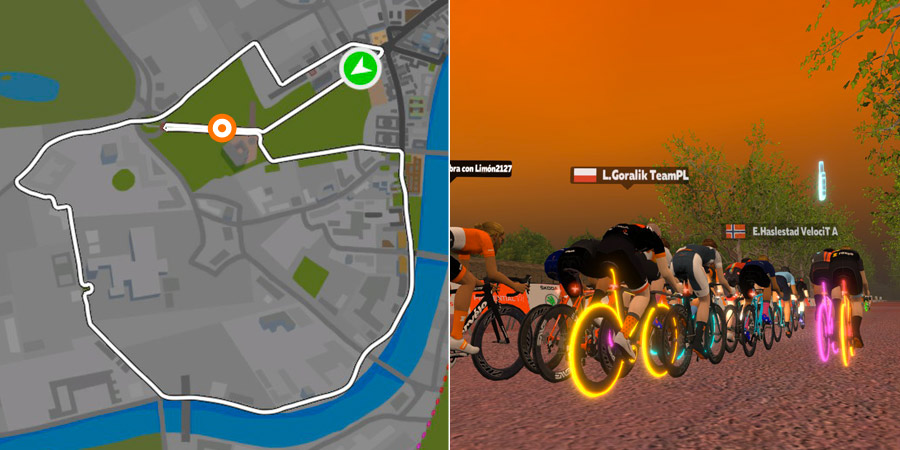 Once through the sprint banner, you will make a slight right and hit Constitution Hill's false flat. Typically no attacks happen here, but be sure to hold your position through the u-turn. After this turn the road changes from a slight uphill to slight downhill, so be careful to maintain position and not get dropped off the back as the group builds speed and quickly heads down to Buckingham Palace. 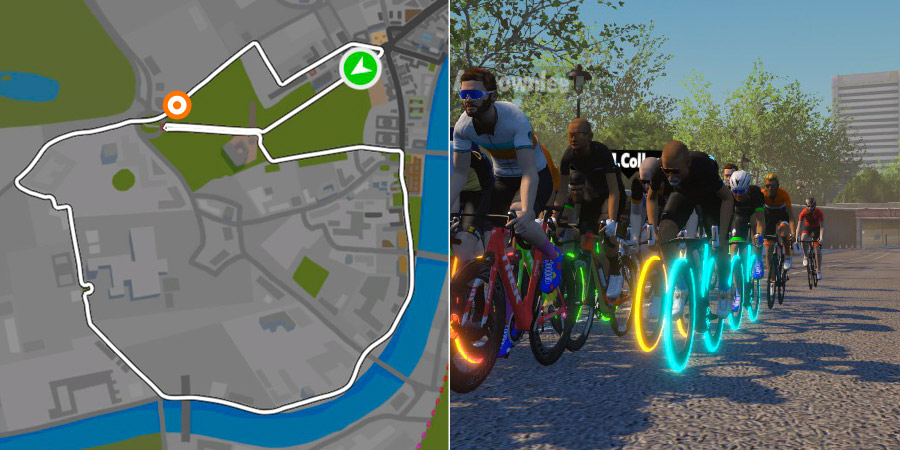 As the longest and steepest rise, this is the most decisive section of the route. Need a little boost? The feather power-up will help here. Be careful not to blow up early as the rise continues until the road makes a hard right, making this a hard ~60 second effort.

If you can hang with the front group until the hard right the road will tip downward, giving you a chance to recover before hitting The Mall's red asphalt. 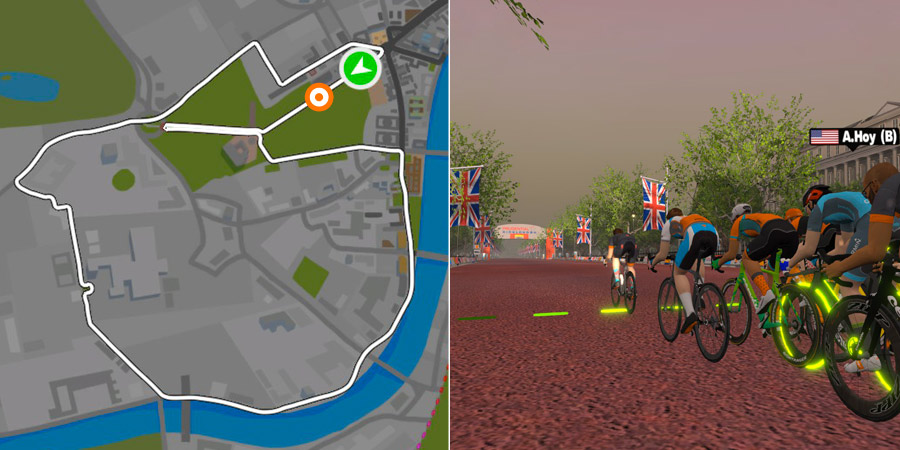 Due to its flat profile, Greater London Flat races almost always come down to a pack sprint. With its slight downhill grade, the final sprint is fast. Speeds often top 70km (43mph) so an aero helmet power-up gives a big advantage here.

Got a van powerup? It only helps when you're drafting, so stay on someone's wheel and ride that leadout train until you can power through at the last moment.

We hope you've enjoyed this Race Recon. The goal of this series is to explain the features that make each Zwift route uniquely challenging for racers. Previously we looked at Innsbruckring. Be sure to read that post for more tips!