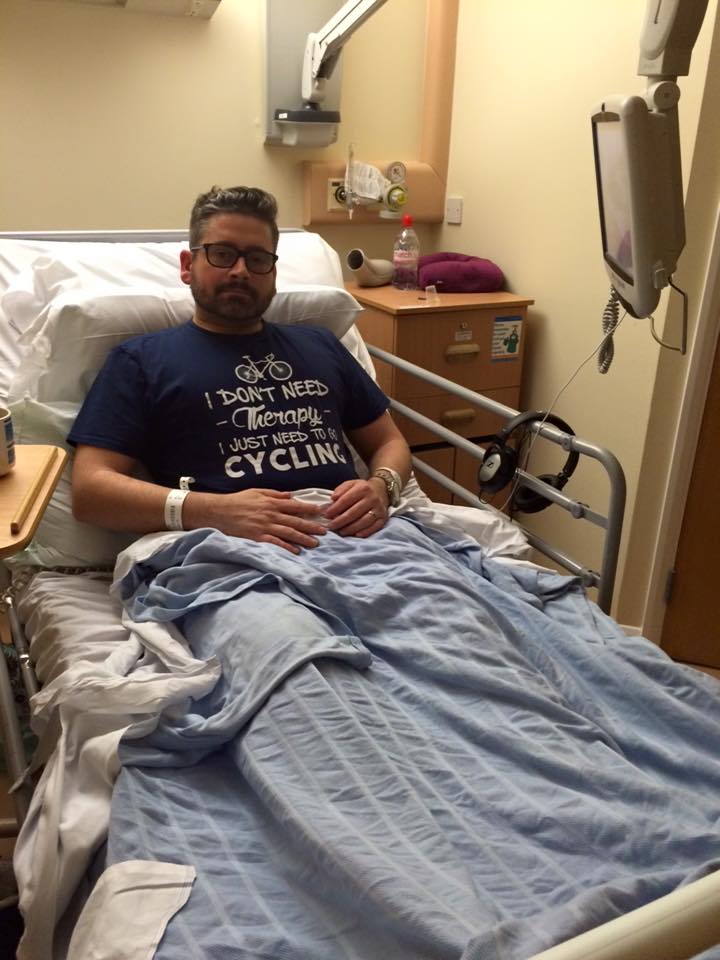 Andee Green has had a rollercoaster 18 months. A cyclist since his Dad built him a bike from scrap parts when he was a toddler, he was working as a head chef in Dorset when his life came tumbling down around him.

On the 23rd January 2015, Andee Green was diagnosed with Acute Disseminated Encephalomyelitis (ADEM), a rare autoimmune disease involving inflammation of the brain and spinal cord that affects eight in one million people a year. Developing from fatigue, to a lack of control over his legs, then blurred vision, Andee found himself on a hospital ward, waiting for his fever to drop low enough to allow treatment to begin.

After days of blood tests, MRI scans, lumbar punctures and dozens of different tablets, Andee awoke one morning to a simple thing that changed his outlook and inspired him to look forward to a time when he was out of hospital - it was a message from former Mountain Biker Martyn Ashton, himself paralyzed since an accident in 2013.

Andee says "Martyn had long been a hero and I was touched by the way he remains so positive and upbeat after his terrible accident. I knew that my journey would be tough, but nothing in comparison to his, so his selflessness was what really got me."

"It was short and sweet but he was so blasé about his 'antics'. I then felt compelled to get well and send him a picture of me riding by my 40th birthday - just 6 weeks later!"

The message from Ashton was followed by well wishes from other MTB and BMX legends leaving Andee feeling amazed and humbled, which, as he says, "ultimately made me more determined to get up out of my hospital bed & learn to walk. I'm glad I'm not a religious man, or I'd have sworn it was some kind of miracle..."

So, Andee had his first target set. To be back on his bike before his 40th birthday, in six weeks time. Discharged from hospital with a seven month course of steroids, his weight ballooned, but he was determined to keep to his goal - and to be fair, he did, albeit slowly and steadily. However, finding it hard to exercise with the extra steroid weight, and falling into a bored depression, Andee was desperate for something to occupy his time, and understandably excited to hear about a new program a Facebook friend mentioned. 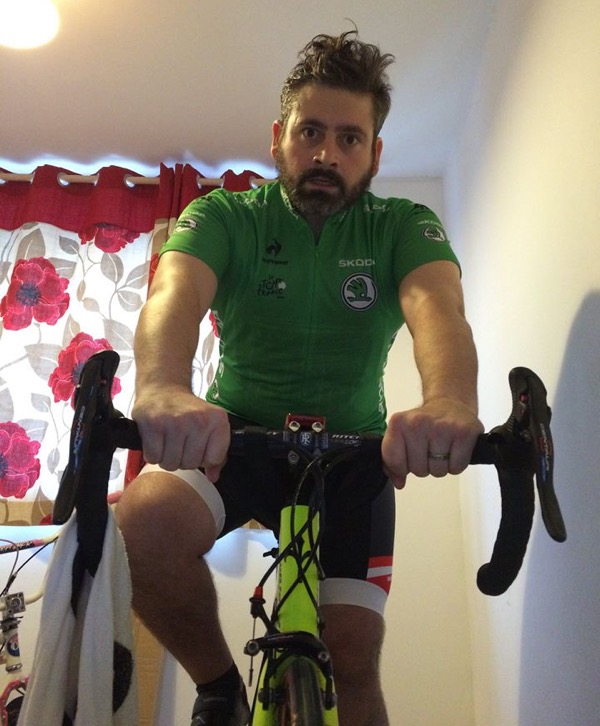 "I joined Zwift in May 2015, during Beta testing, I think. A friend in the States had it and recommended it to me as it could benefit my recovery from ADEM due to being safe indoors."

"I went out and bought a Wilier road bike and a trainer and then waited to hear back from Zwift. I was understandably excited when I started Zwifting - long term illness and time off of work can have a profound effect on a person and I really needed something to engage both body and mind. As you can imagine, when Beta testing ended, I was waiting with my card ready to sign up."

Matters were exacerbated by a reaction to the ADEM drugs which left Andee with Avascular Necrosis, leading to a double hip replacement. He began to feel even more of a prisoner in his own body, unable to walk without crutches, driving with a Blue Badge (as a registered disabled person), and struggling to do basic day to day chores - but the one thing he would still fight to do was ride a bike.

"I was riding 4 or 5 days a week, but with the recent surgery, that has had to stop. Little and often has been good for me. I usually like to ride around 20 miles or one hour every other day, although I have had better & worse weeks than that." 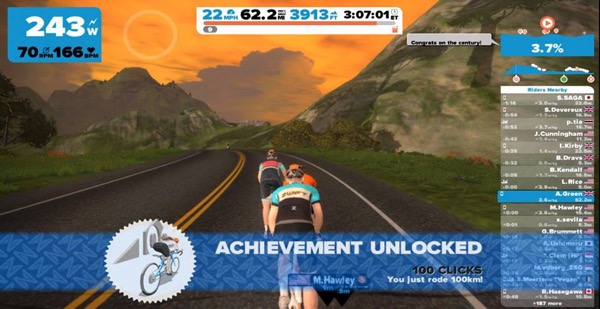 "I was immensely proud to unlock the Metric Century jersey in December, although I did get into a bit of trouble with my doctors and my fiancée for 'overdoing it' - what can I say? I need a steady reintroduction back to full strength."

With his aim to be back on a bike by his 40th Birthday well and truly achieved, Andee walked the Bournemouth Hospital men's cancer charity's event 'March for Men' on 23rd March 2015 and now has his sights set on even more. 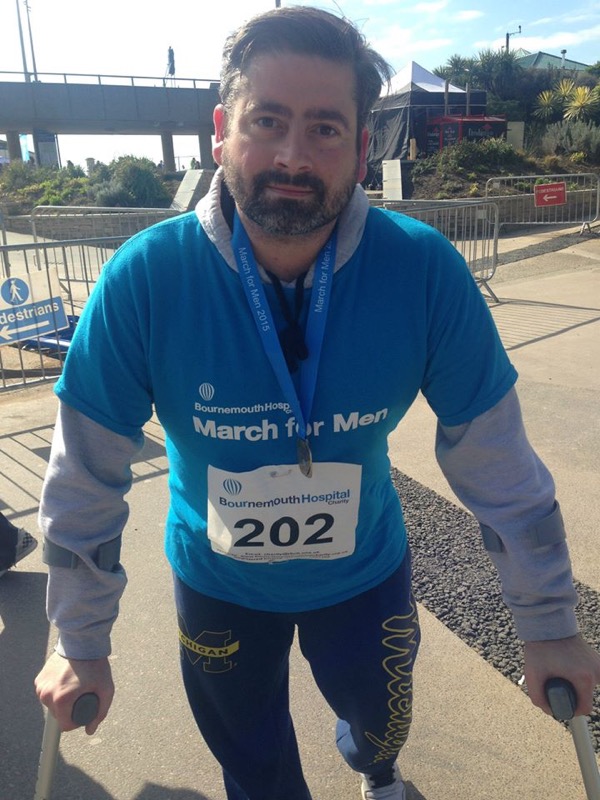 "I did the March for Men on crutches and it took me almost an hour and a half to do the 5km. I was amazed to find everyone waiting for me at the finish line! I thought everyone would have left by the time I staggered in! It was a feeling like I'd never imagined - so I thought to myself 'what next then?'

I knew I needed something big, but with little impact as I had serious central nervous system damage, so cycling was the best thing, and I had a friend who'd completed the previous year's RideLondon100. I have met so many great people via this illness and by trying to raise money for their charities (Transverse Myelitis Society & Multiple Sclerosis Society) I hope that this event will not only help myself, but others too. Awareness and understanding of the condition is key - I didn't even know about myelitis until I got it!"

But not one to take it easy now he'd found his perfect outlet, Andee decided to set himself one last challenge. With Zwift a true firm favorite, and with the prospect of RideLondon100 looming large on the horizon, combining training with goals led to Andee deciding to ride 1000 miles before the one year anniversary of his hospitalization. Following a few hours on the road prior to his hip issues, and then with the help of Zwift, he made it with time to spare.

"I managed it the day before my one year anniversary of being ill! My total included a few Strava rides early in the summer, so I am still a little short of my 'Zwift 1000', but that'll come soon too, all being well. It was such a relief to have met such a big goal. The doctors just one year prior had informed my parents that there was a strong possibility that I may never walk again, so it was very fulfilling, and more than a touch emotional, to have proved them all wrong on such a level.

The power of Zwift should not be underestimated - if it can help someone like me get back on his feet and to a level where I can hit 1000 miles and eventually go on to ride 100 miles of the real streets around the English Capital within 12 months, then just imagine what it could do for others with fitness or mobility issues - as well as helping the more ardent roadie maintain peak levels of fitness, in the comfort and safety of the home."

Have a Zwift Story to share? We'd love to hear from you! Here's how to get in touch.

Zwifting with CANYON//SRAM Racing over 6 years ago