Watopia's Figure 8 route is a favorite among racers for its constant mix of punchy climbs, rollers, and flat sections. This route covers all the roads on Watopia's Hilly and Flat routes, in both directions, so you get plenty of fresh visuals as you race.

Regardless of your race route, remember these top tips for Zwift racing (most apply outside as well!)

What follows is a detailed look at key sections of this route from a racer's perspective. Veteran racer and Zwift Community All-Stars team member Casey Schumm has generously shared some pointers, so we know you'll enjoy this quick tour full of useful tips for top results when racing Watopia's Figure 8.

This is how Casey explains what makes the Figure 8 special:

"Such a great course. There are never more than 2-3 miles without a bump or roller to cause some havoc. It is generally flat so tactful riders can really conserve and race effectively but with both the forward and reverse KOM’s there is enough punch on course that everyone will have to go over the limit in the race." 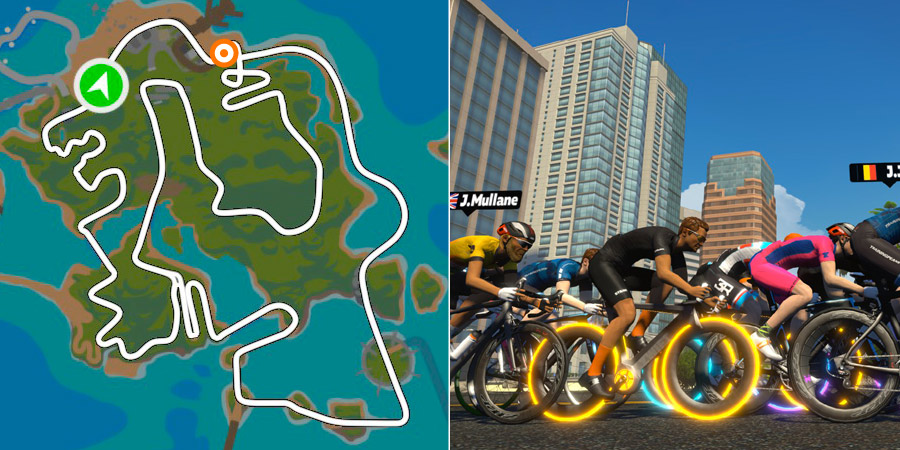 Be warmed up and ready for a hard effort at the beginning. You can't win the race here, but many riders have lost theirs due to a slow start! Casey wisely warns, "Hard starts are critical regardless of course."

#2: Climb Out of the Tunnel 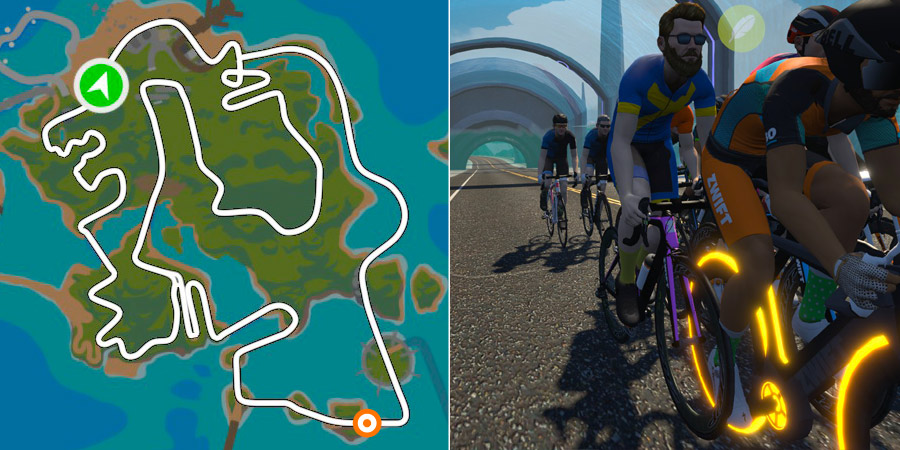 When the road makes a hard right, be ready for a short, hard effort as you climb up from the ocean tube onto dirt road.

Casey says, "While this is not a critical moment in the race it is a place to pay attention to not get caught off the back as you enter the dirt roads." 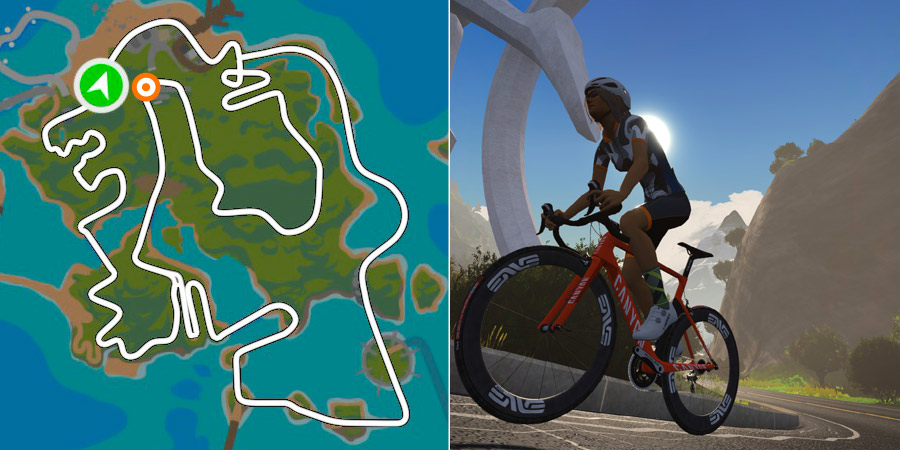 As you pass Hank's Place on the left, the Aliens rest high on the hill in front of you. This is the first of three very important sections on the Figure 8 route.

Casey says, "The reverse KOM is my favorite hill in the game to race. Pace often picks up with a hard lead-out starting at the KOM line. But the real fireworks start when passing thru the Alien statues. This is the critical 30 seconds that will make or break this hill in a race."

After climbing through the Alien statues it is time to find a wheel and reel in anyone who may have gotten a gap. Casey shares a few more tips: "About halfway up the climb there is a brief moment of reprieve with a small descent but don’t fall asleep here as racers often use this increase in pace to attack the short steep gradient immediately following the decent. And watch out for the sneaky KOM jersey chasers as they often sprint for glory at the KOM banner and leave a few people to chase on the descent!" 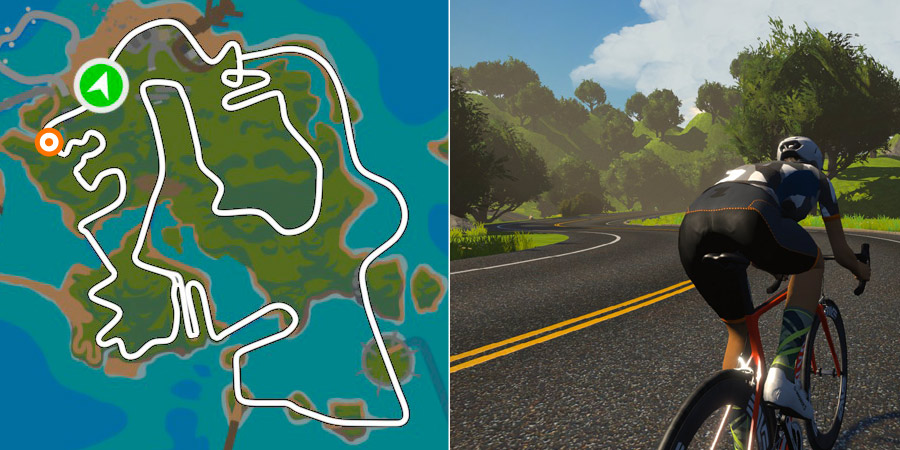 Casey says, "The reverse Esses start with a short ~2% false flat that can get tough if you have anyone setting a hard pace. Immediately following this false flat is a half mile of steady rolling hills.  These hills can create a great rhythm in the race or continually force you to fight in the pack depending on pace. And the final part of the Esses is a sharp climb toward the Sprint bridge which often requires a 20-second burst into the red to hold onto the pack." 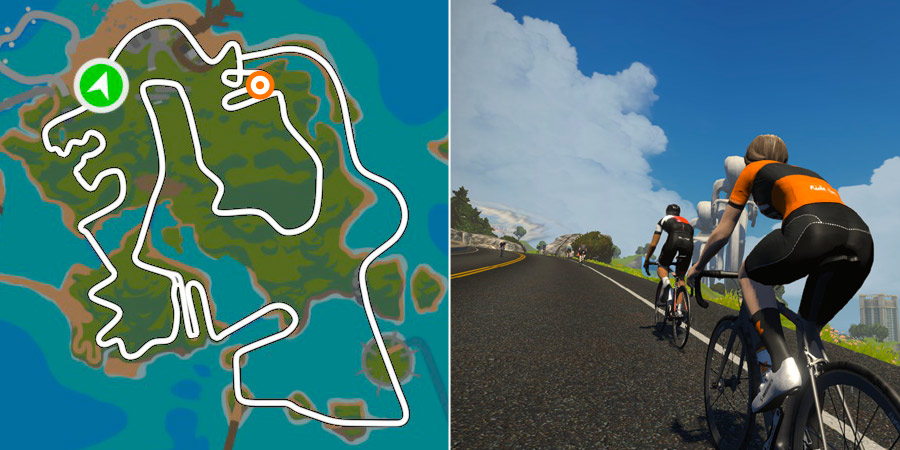 Affectionately known as "The Wall", this was the first KOM section created on Watopia. It's tough to ascend at race pace, and since it comes near the end of the Figure 8 route, it's even tougher! Casey admits, "No matter what race format or course by the time I’m halfway up the third section I am always ready to pop."

Small variations in effort and positioning can make a big difference here. As Casey explains, "You must attack the first two sections hard and keep your competitors right in front of you. By the second switchback (third section) the slope slightly backs off so you can squeeze a micro draft to just hold onto your competitors."

Casey shares one final word of warning on this section: "Remember to not back off too soon. While the road flattens out a little before the banner the effort needs to continue through the KOM banner or your competitors will be far out of reach." 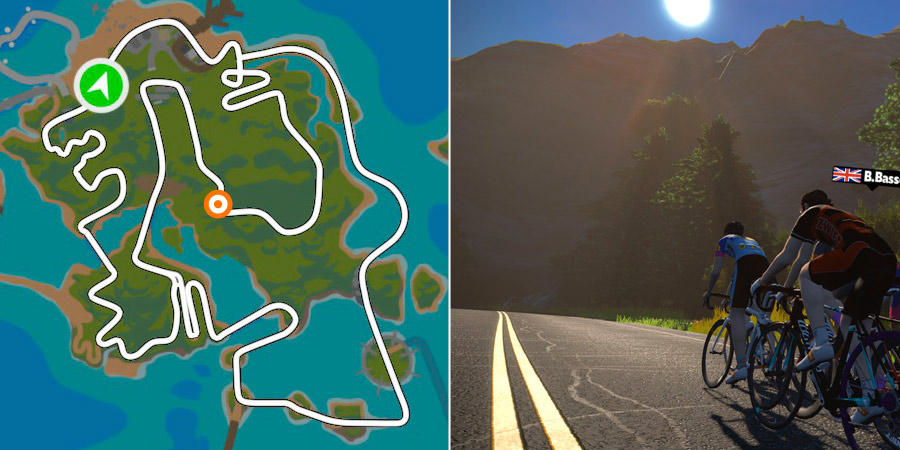 Casey says, "This roller will require a 10-second hard effort to stay in the bunch.  Once you have navigated the roller you can enjoy the remaining descent through the Aliens..."

This short bump surprises many since it is hidden as you approach. Use the element of surprise to attack off the front or put in a dig and make the catch. Increase your watts heading into the sharp right then keep your power high over the top and into the descent. 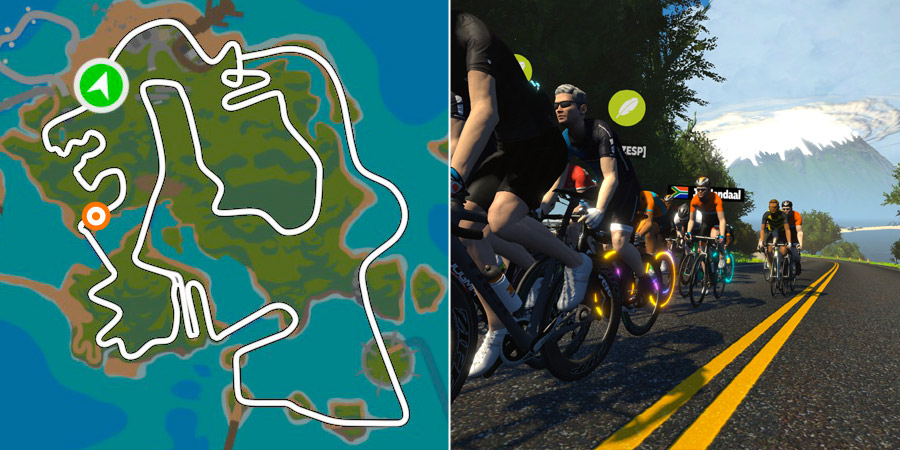 The Esses Ramp is the beginning of the third and final critical section of the race. Casey warns, "This is almost always a 30-second full orange numbers attack into the Esses. Any wheel the gets away here may not come back before the finish."

This section sees hard attacks on final laps as climbers and long attackers put in last-ditch efforts to distance themselves from sprinters in the pack. Keeping your power high over the top is crucial as the short downhill which follows lets you pick up speed quickly. 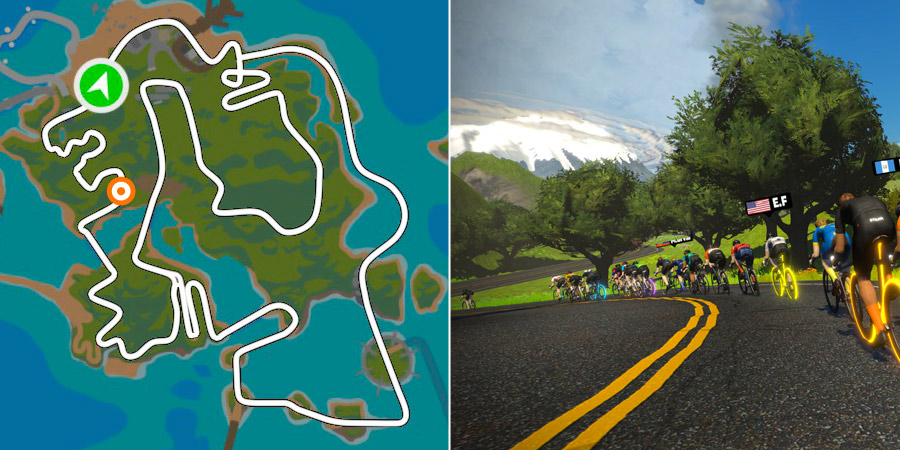 Casey says, "If you make it into the Esses in the lead things are tense.  Anyone can attack thru the rollers at any time before the finish, and the pace stays high as people react to every change in power around them. Watch for any hint of a sneak attack. Be poised to react so you can stay in the draft of any surges."

This section of rolling curves always adds excitement to a race as riders work to hold a wheel over a roller coaster of gradient changes. A pure sprinter is wise to conserve energy here--but you must do so while holding the wheels of those attacking from far out. 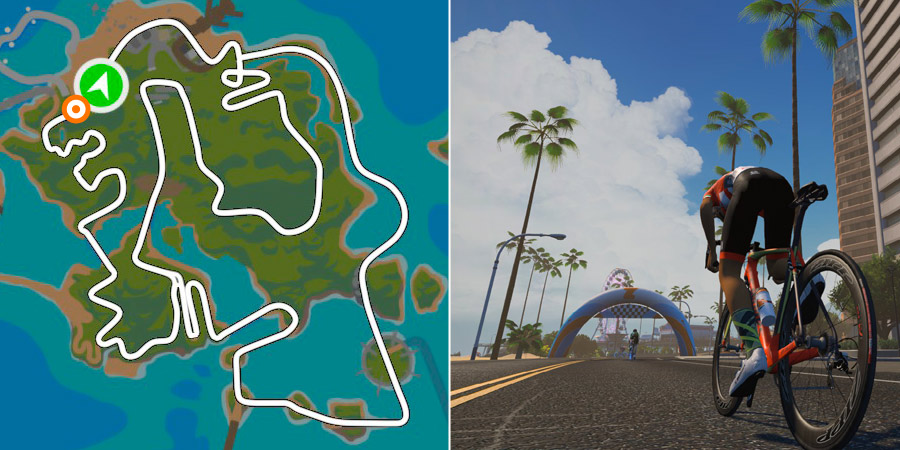 It's near the end of the Esses that Casey evaluates his sprint strategy. "Do I want to instigate or respond? How long can I maintain a sprint? Powerups? All of these factors should form a plan for the next 30-45 seconds but be ready to adapt as you never know who is going to shoot out of the pack at any time."

Got an aero helmet power-up? This is the time to use it.

Timing and position are crucial here, but you may be forced to change your plan based on other riders' actions. As Casey explains, "At any point between the Volcano tunnel intersection and the 300m banner the sprint can be launched. Any launch here must be responded to with 100% commitment. Be prepared to give everything you've got until you roll through the banner."

We hope you've enjoyed this Race Recon. The goal of this series is to explain the features that make each Zwift route uniquely challenging for racers. Previously we looked at Gotham Grind Reverse. Be sure to read that post for more tips!

Heart Rate Zones - Running to the Beat over 3 years ago