Nick White: a National Champ, Inside and Out

“I am from Ballarat, Australia and grew up on a farm,” explains Nick White. “I got into cycling through an after-school sports program on the velodrome when I was 9 years old and ever since then have not looked back!”

White was recently crowned as the Australian U23 National Road Race champion, but he’s not stopping there. In fact, it appears he may just be getting started! With aspirations of riding professionally at the World Tour level and strong recent performances against top World Tour teams, it seems we may see him on the global stage soon enough.

White turned in an impressive 2018 season, finishing 2nd overall in Cycling Australia’s prestigious 2018 National Road Series (NRS). He also took the Zwift National Champs jersey in August, launching his strong sprint from a select group which had been whittled down by repeated efforts up the Volcano KOM.

His NRS success secured him a spot racing in the Tour Down Under, where he rubbed elbows with top World Tour pros and delivered a strong performance in the breakaway on the race’s final stage.

“Riding up Willunga Hill on the last day of the TDU after being in the break with people like Thomas De Ghent and then riding up the Hill the first time solo out in front of the race with such a big crowd… it was pretty surreal,” says White.

Surreal, yes. But not surprising. It’s clear White is an exceptional cycling talent.

He’s managed some very impressive results early in the 2019 season, winning the U23 Australian National Road Race in January, “a feeling I will have with me for the rest of my life and I will not forget it.” Then repeating that performance in the 262km Melbourne to Warrnambool Cycling Classic, the first round of the 2019 NRS. And just this week he won the third stage of the Tour de Taiwan.

It looks like we’ll be seeing a lot more of Nick White in the pro peloton.

Nick arrived on the Zwift scene in 2017 thanks to a recommendation from his coach Pat Shaw. Jumping into the inaugural Team Dimension Data Zwift Academy, Nick earned a spot in the final and a trip to train with Team Dimension Data for Qhubeka in Capetown, South Africa.

Racing on Zwift provides “much-needed intensity” as White describes it, but he also appreciates how Zwift helps him train in bad weather. “Making it easy to do long rides inside when the weather is bad has really been a game changer, especially over the Ballarat winter which is known for not being very good.”

Asked about the differences between outdoor road racing and Zwift races, White quickly acknowledges that they are vastly different experiences.

“In real life (IRL) racing is something I have grown up doing my whole life and become very acquainted with so going into Zwift racing was like going into a completely different sport. Road races are usually a much easier start and consistently hard when it gets hard and it is also reasonably obvious when it will get hard in the race whereas on Zwift they are usually an hour of almost maximum effort with very quick starts and when the hammer goes down it REALLY goes down.”

But both racing disciplines do share one thing in common, according to Nick: “They are both similar in that by the end in most cases you are exhausted!”

He is currently racing against other pros in the KISS Super League, riding for the Zwift Academy Dream Team. 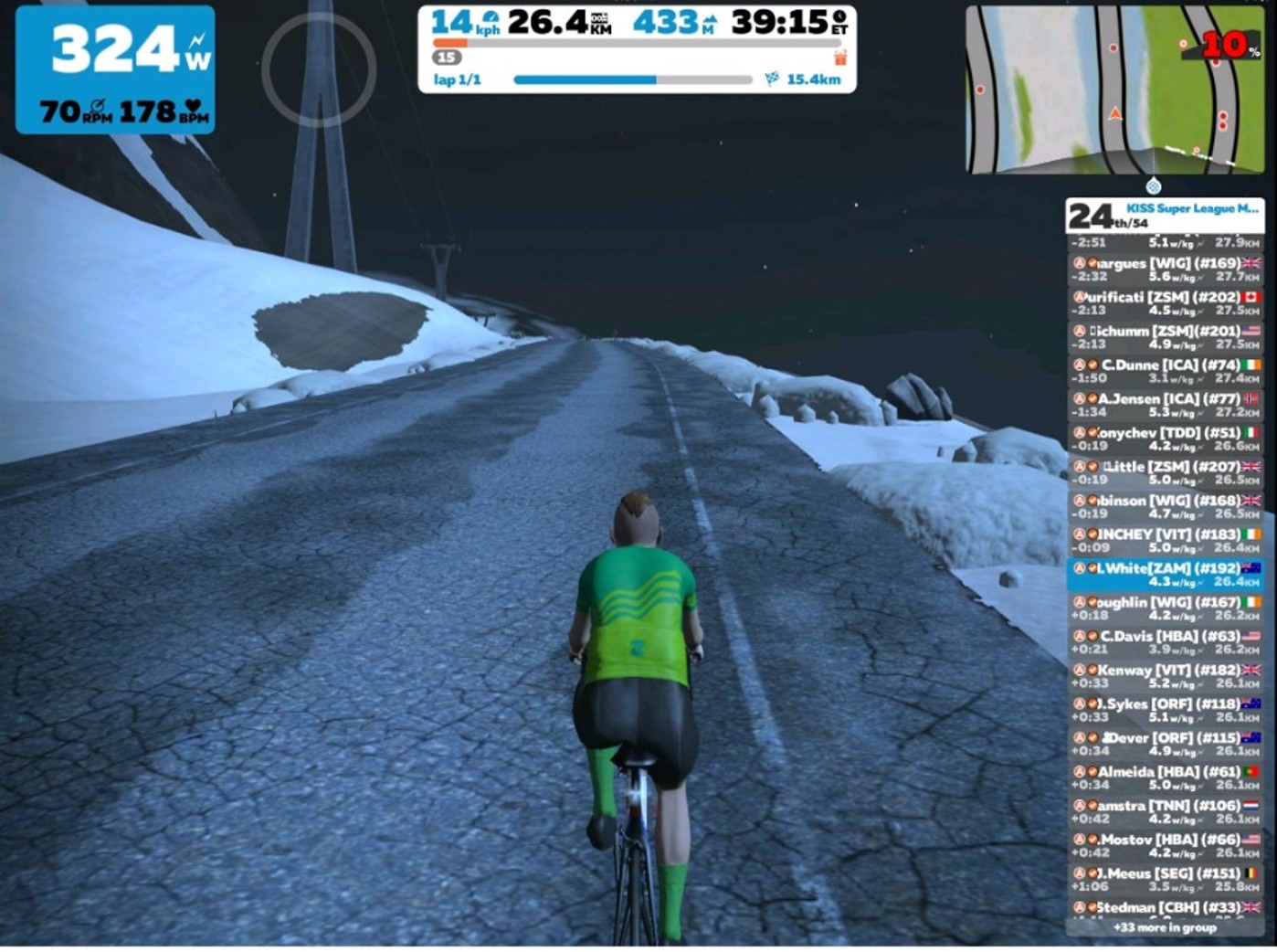 Top-level riders must maintain the inner drive required to put in painful training efforts while traveling and racing. White’s will to win helps him keep the fire burning.

“I am a very competitive person by nature, so I think for me the best way to get motivation is to race, as that's what drives me!” White explains. “Which is another reason I love Zwift… if I ever can't be bothered training a Zwift race will usually help me work up the motivation to train.”

Like most Zwifters, Nick has some favorite race routes. He especially likes the Innsbruckring circuit. "The races I like in Zwift have short and sharp climbs and a slightly downhill finish. I like the Innsbruck circuit they have used in a few crits that is short and includes the Legsnapper.”

His competitive racing focus gives him the inner drive to maintain a difficult training schedule week in and week out. “I try and do 500-600km per week and it is fully structured by my coach. I guess I just look towards the next race and try to stay motivated for that, which I usually find pretty easy to do,” Nick says.

And even though White is driven by a competitive streak, he understands that in cycling success is much more than standing atop a podium. It may mean celebrating a teammate’s results, grabbing solace in the pain of pushing beyond your own limits, or simply taking the time to enjoy riding the bike.

“At the moment and all results aside I love to ride my bike and see parts of the world very few people my age get to see. To me, that is a privilege I cannot take for granted and that is success in my eyes.”