The race with the most climbing seen so far in the Women’s KISS Super League. Who would rise to the top?

After a short, flat lead-in, racers head up a 9.4-kilometer climb. It has a 3.9% average grade, but that includes a couple of flatter sections. Most of the mountain is a little steeper than that, but the most difficult part is yet to come. At the top, racers don’t have much time catch their breath before starting up the next climb to the radio tower. This one is 1.1 kilometers long and a whopping 13.7% average grade. From there, the riders start a long descent down to the Watopia village, where a few more kilometers of rolling terrain take them to the finish line. The total route distance is 30 kilometers. 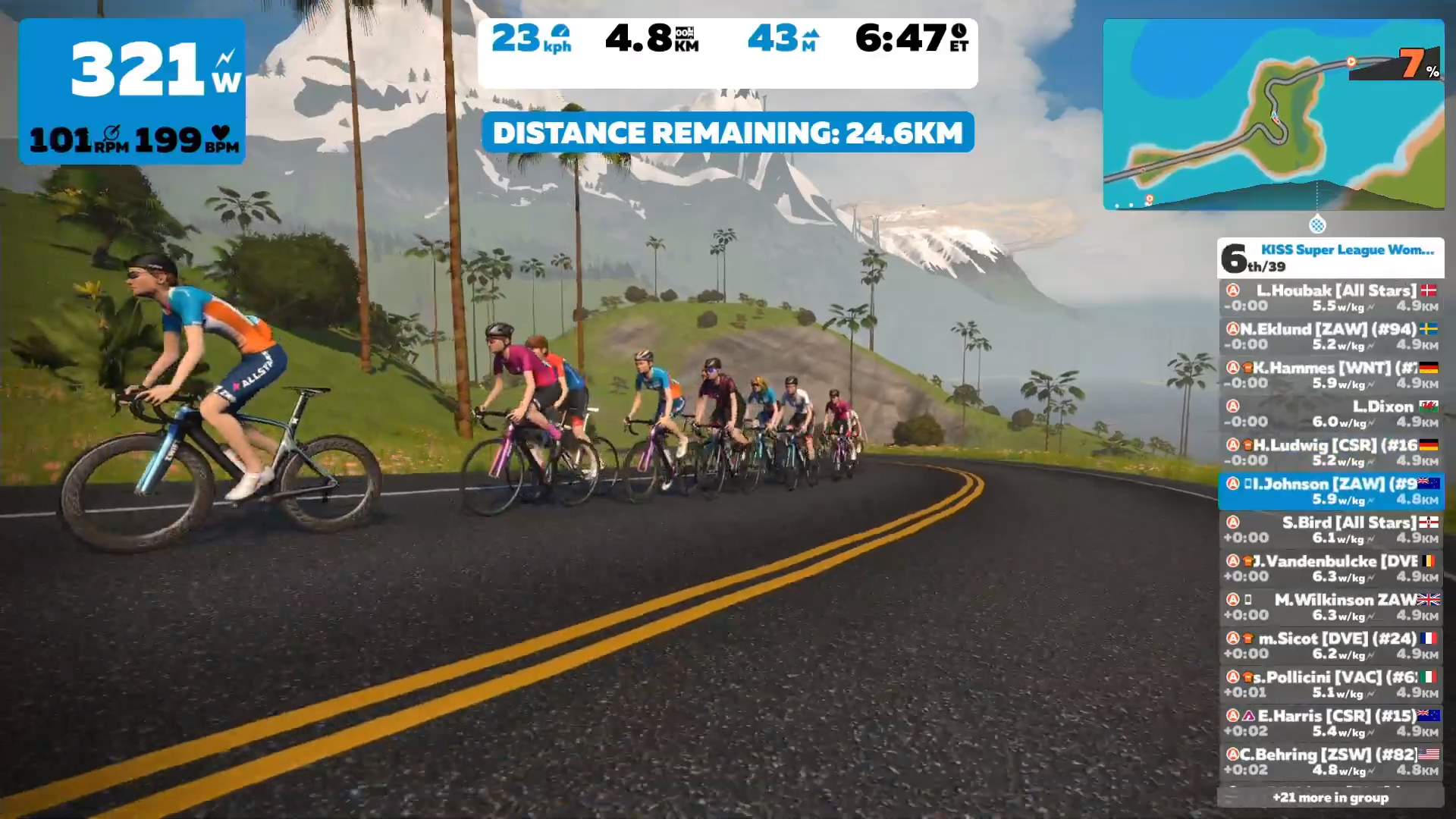 The race started to break up immediately on the lower slopes of the climb, with the Zwift All Stars setting the pace. By the time the pack hit a flatter section going over a bridge, there were 9 riders in the lead group, followed by another group of 6 several seconds behind. Then the road pitched up again. Ella Harris (Canyon//SRAM) put in a massive effort to close the chasers’ gap to the group in front, but they couldn’t quite make it.

About two-thirds of the way up the mountain, Houbak took a strong turn at the front. She got a small gap, forcing Wilkinson to chase and dropping Bird from the group. Sensing that the others were struggling, Houbak attacked a few minutes later! Wilkinson dug deep and pulled herself and Dixon up to Houbak. It was just the three of them heading up to the Queen of the Mountain (QOM) banner.

On the tower climb, Wilkinson took the lead and Houbak followed. Dixon started to struggle and lost Houbak’s wheel once, then twice. But each time she managed to kick back on, finally using a lightweight feather PowerUp. Houbak helped her close the gap to Wilkinson, and the three all reached the summit together. Behind, Chabbey dropped Eklund and began the descent in pursuit. 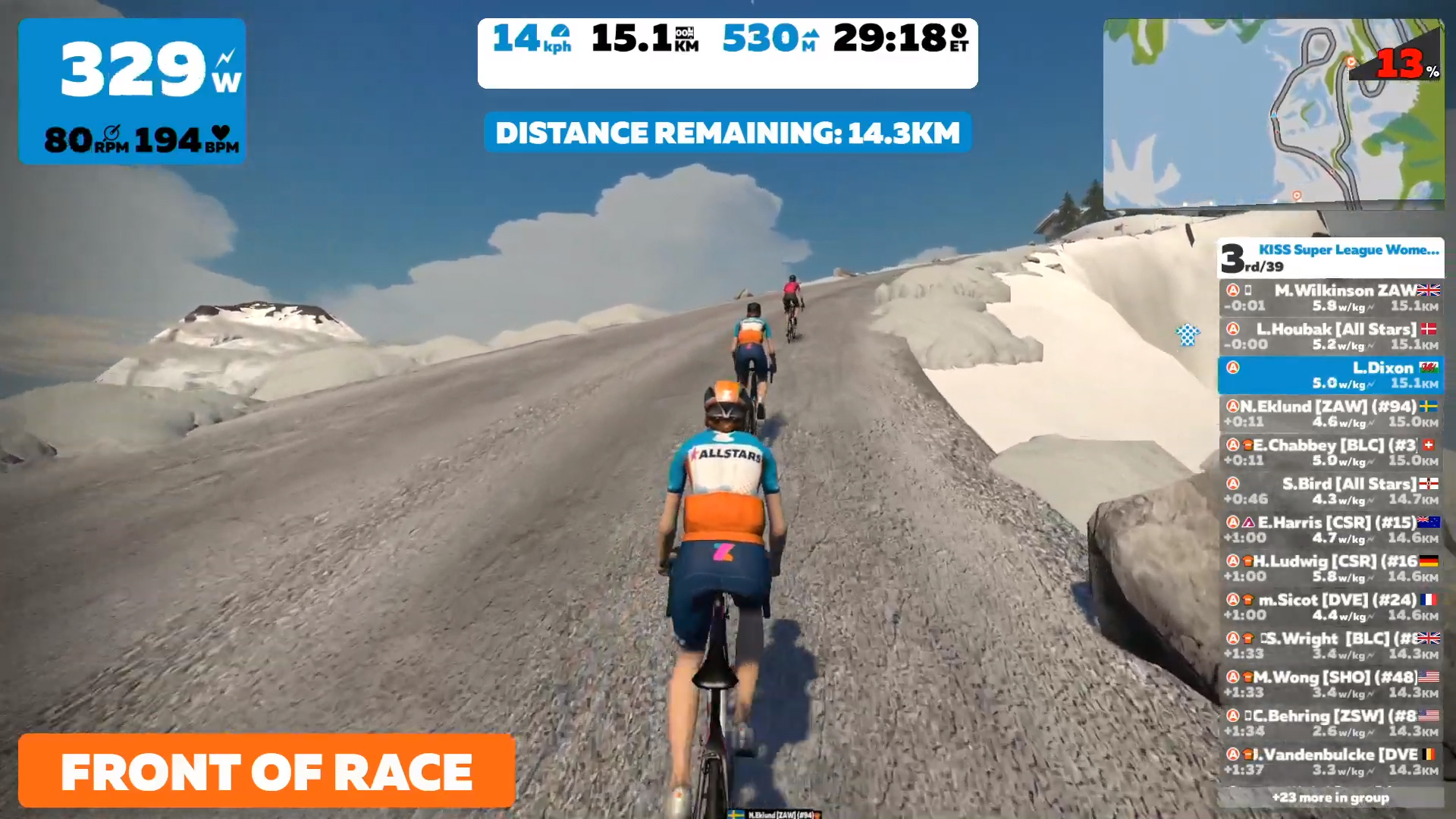 It was two All Stars vs. one Zwift Academy Dream Team rider. Dixon and Houbak each made a couple of digs off the front – not all-out attacks, but trying to force Wilkinson to chase. She had to stay attentive.

“I knew that Louise (Houbak) would probably want to go long and Leah (Dixon) wouldn't mind the sprint finish, so it could work out for either of them,” Wilkinson said.

Then, Dixon pounced for the sprint banner, wanting to claim the intermediate sprint title for her team. Wilkinson followed and came around at the last second. The two left Houbak behind, powering up a small hill after the sprint and settling into a steady effort for the last 2 kilometers.

As they approached the line, Wilkinson started a sprint with a draft truck PowerUp. That way, if Houbak passed her, Wilkinson would get an extra benefit from her competitor’s slipstream. She immediately pulled out a gap! Houbak had no PowerUp but a whole lot of power. She got around Wilkinson and took the victory!

This is the fourth league win for the Zwift All Stars. They placed four riders in the top 10 this week, and they are still at the top of the team standings. 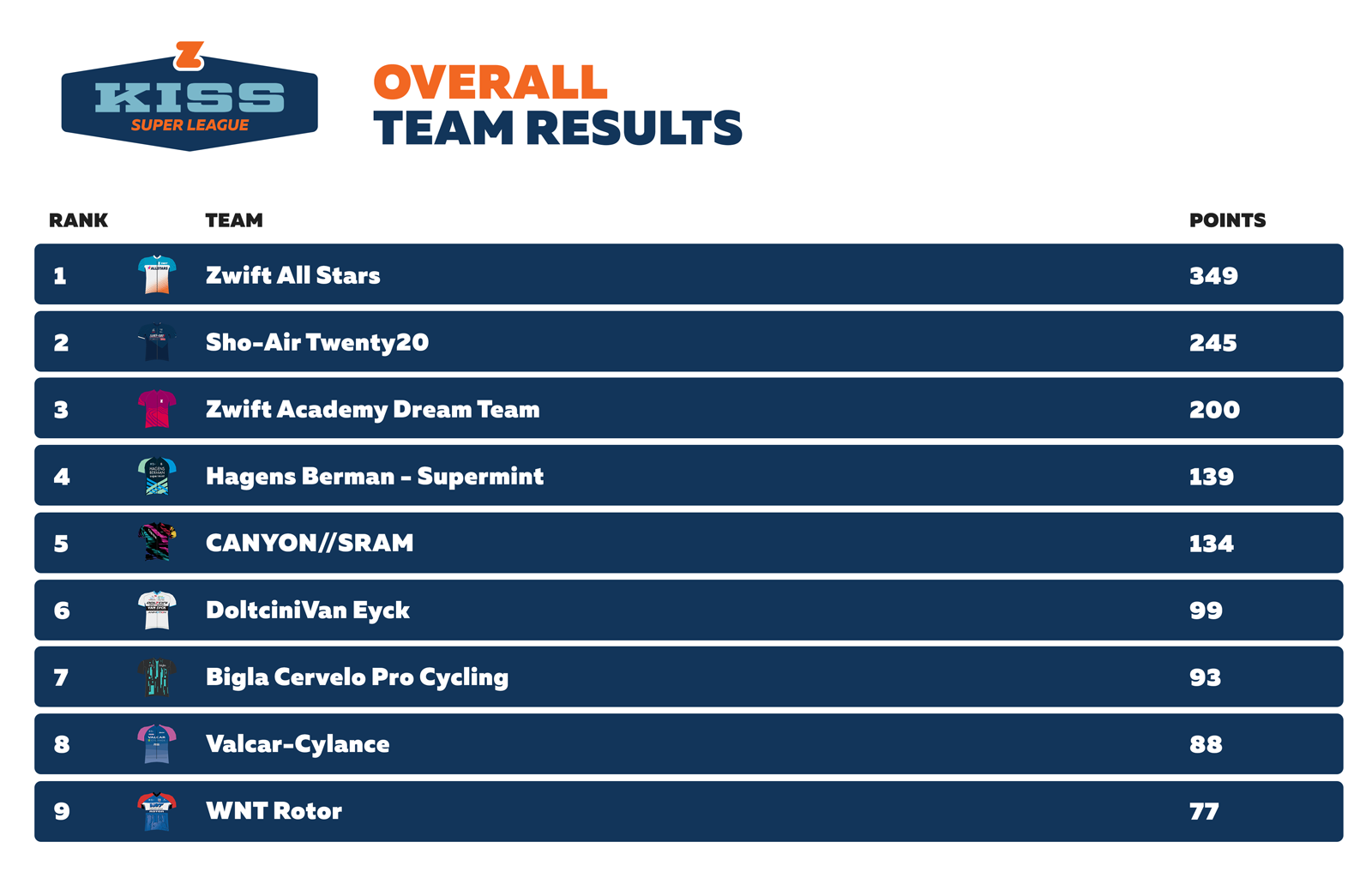 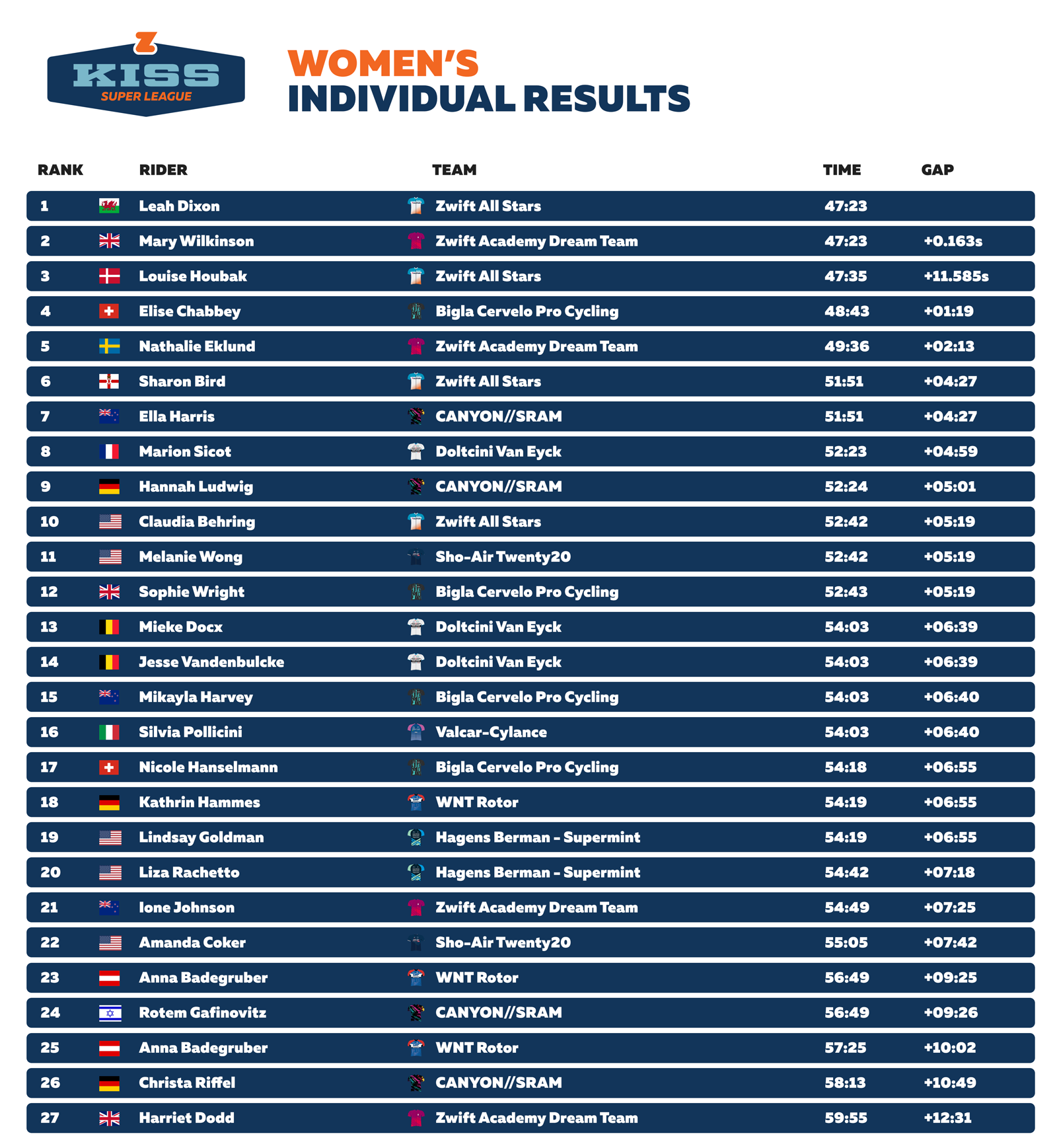 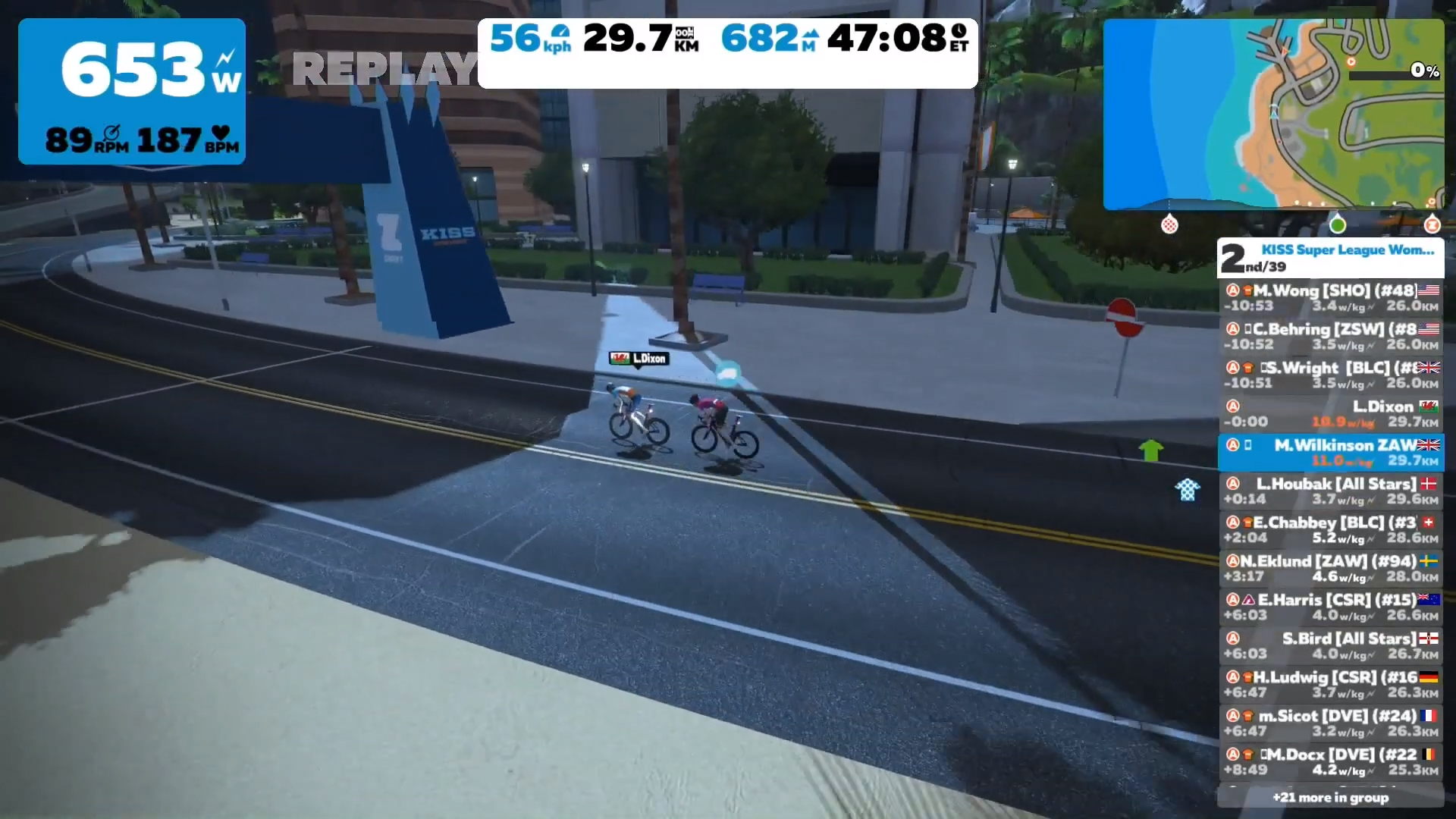 Dixon said she had a hard time staying in contact on the radio tower climb, but she knew if she could get to the top she’d have a chance to rest. She also knew that her teammate, Houbak, could win in a solo attack or in a sprint. That gave her confidence in her team’s chances at victory.

“I'm really pleased with my performance today, it’s the best Zwift result I have and the first time I've ever won a sprint!” Dixon said. “I feel like I've learned a lot over the course of the league and the British Cycling Zwift eRacing Championships. The team’s performance was brilliant as always, it’s always a pleasure to race with the girls as they inspire confidence and are all so strong! Our (team director) Rachael Elliot was also great as always!”

Wilkinson said that the Zwift Academy Dream Team knew the climb would split the group apart, so they all just tried to hang on for as long as possible.

“I felt pretty tired going into it, but I knew the course should suit me so I just forgot about the fatigue and got on with it!” Wilkinson said.

She said she’s happy that the Dream Team is on the overall podium and has had a great time racing the league.

“The KISS Super League has been brilliant from start to finish,” she said. “It's really showcased so many of the positives that eRacing has to offer with exciting races, quality athletes and lots of pain! For the non-pro teams being able to mix it with the Pros has been hugely inspiring for everyone involved and has really highlighted what eRacing has to offer.”

Next Week – Round Eight

Tune in live to catch the final race!