One of the most popular questions asked in the support forums or on the Zwift Runners Facebook group is, “What is the most accurate footpod to use with Zwift?”

It is an arguable point, but one of the most popular options currently available is the Stryd. At $200 it is certainly an investment, but one that many people choose for its superior accuracy in reproducing speed within Zwift.

The Stryd pod was initially conceived as a small pod that clipped to a runner’s shorts. The idea was to become one of the first companies to create a product to measure power in running.

Cyclists measure their effort level using power meters. Pressing the pedals generates watts and the higher wattage output a cyclist manages, the more effort they are putting into the ride. It follows that the stronger you become in training, the more watts you’ll be able to generate and hold over a period of time.

The team at Stryd developed an algorithm to effectively model the generation of power in running. Historically runners have measured effort levels by monitoring heart rate and pace. The problem with heart rate is that it can be slow to react to sudden changes in effort. It may also vary with the temperature in the room or if you are under the weather, among other things. It’s also difficult to use pace because it’s harder to compare an effort on a flat course, where you can maintain an even pace throughout, with an effort on a hilly course, where pace naturally slows when climbing and speeds up when descending.

If you are maintaining an even effort throughout, power numbers should remain the same whether you are climbing, descending or running on the flat, making it easier to compare say two 10k runs over different terrain.

Over time, the Stryd became a chest strap called the Pioneer, which also measured heart rate, and finally morphed into what we know today as the Stryd footpod.

During the course of its development, a happy side effect was that the Stryd became regarded not only as a product to measure power in running, but as a footpod which measures speed, distance, and cadence with a surprising degree of accuracy.

It wasn’t long before runners, looking for a more precise measure of their speed within Zwift, started using and recommending the Stryd footpod.

While other footpods are good at reproducing a steady pace on the treadmill, they may falter when faced with sudden changes in speed such as those which occur during interval training. The Stryd, on the other hand, seems to handle speed changes with ease. Furthermore, while other footpods might need calibrating, the Stryd often produces accurate pace out of the box, particularly when used on a high-quality treadmill.

Another plus for the Stryd is its ability to broadcast in both ANT+ and Bluetooth. While most runners will use the Bluetooth protocol, for those who are using a PC with an older version of Windows, ANT+ is still important.

The Stryd connects to Zwift in the same way as other devices. Open the pairing screen and search under Speed Source and Cadence Source. As long as your Stryd is charged it should appear as an option. Occasionally you might need to tap or shake the footpod to ‘wake’ it. 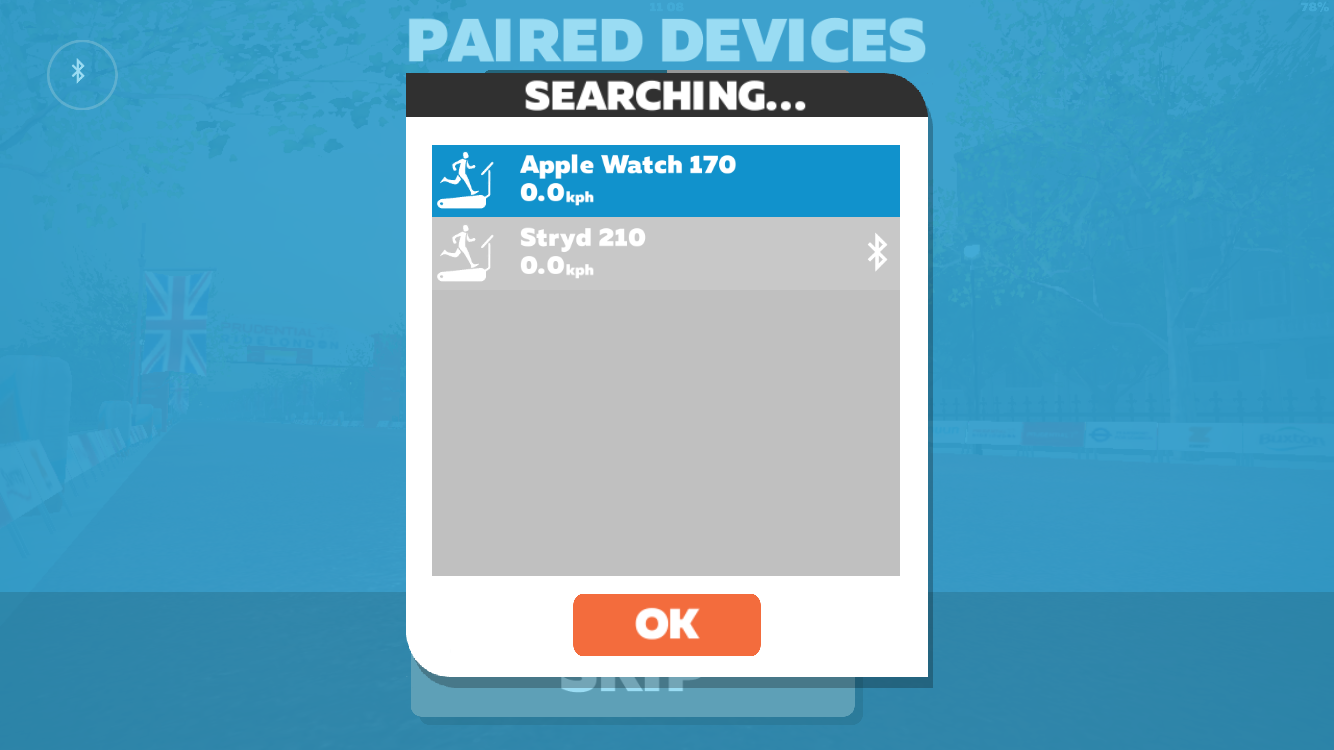 The battery lasts up to 20 hours and is charged using an included charging pad. This, of course, saves on purchasing numerous coin cells and needing to open the back of the unit to replace or reseat the battery.

Staying up to Date

The Stryd team release regular firmware updates via the Stryd app and it is always advisable to keep your footpod updated. Recent updates have meant the Stryd is now much faster to wake up at the beginning of your run and much less likely to go back to sleep if you slow down to a walk in Zwift.

And while power numbers are not displayed on the main screen while running on Zwift, you can view the average watts generated during your run afterward either on the Zwift Dashboard or in the Zwift Companion App.