Finishing your first long-distance triathlon is something pretty special and memorable for every athlete in the sport. Everyone has different experiences and journeys to get there, but that singular memory of your first finish line never fades. Mike Reilly is in the special position to be a part of that for a large majority of long course athletes. His ability to be a part of the triathlon community doesn’t stop there, however, and we take a chance to talk to “The Voice” about his unique role in triathlon.

Mike finds himself in a very impactful role to each and every finisher he calls across the finish line. “Just the thought of the sound of Mike’s voice saying those words, in that way, at that time, was the beacon that kept me going. Every day for six months of training before the Ironman World Championship in Kona I visualized crossing the finish line. I didn’t see an image; I just heard the sound of Mike Reilly’s voice declaring, “Sean Astin, You Are An IRONMAN!” And that’s from the guy that played Rudy; it doesn’t get more inspirational than that! 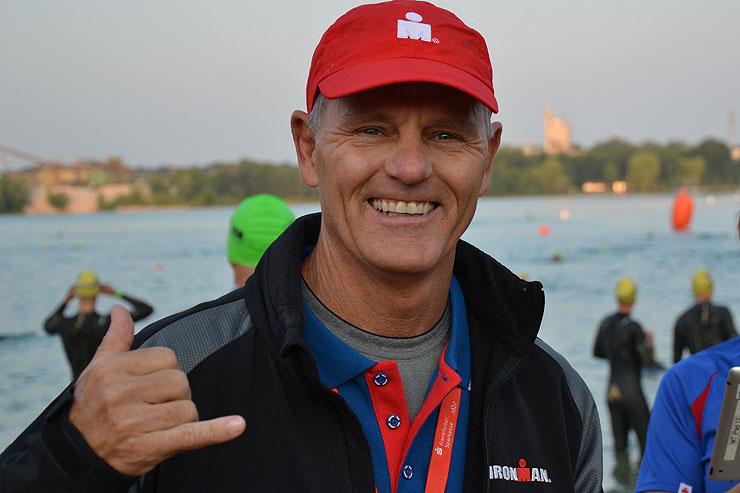 Mike is, of course, very gracious and humble about his role as “The Voice” of triathlon as only Mike could be. “How people feel about it and think about it and the things they tell me about it are sometimes a little bit beyond my comprehension. I just, I just like, wow. I, I didn't know this would happen.”

Over all these years Mike still talks of triathlon in a transformative way. He has seen so many lives affected through the process of training for and completing one of these events. “I even wrote it in my book and it hit me one night when I was writing. It's not about finishing; it's about who you become. You’re sure you want to finish the race but people become somebody else and it's usually, in my estimation, 100% to the positive side. They've changed, they've changed themselves.”

So many things have changed in triathlon, yet so much has stayed the same. Mike simplifies this reality for us. “You've got to train--it's swim, it's bike and it's run. And when that cannon goes off, it's the same. It's the same as it was in ‘78 when the boys did it. It's the same as when Tinley won in ‘82.”

We take some time to chat about recent happenings and results in the sport of triathlon as well. Highlights this episode are breakout performances from Lauren Brandon and Matt McElroy with an Ironman win and a WTS podium, respectively. Jordan talks a bit about the recent E3 expo, which Zwift attended, as well as the video game he’s looking for under the Christmas tree this year!

Zwift has come to Android! over 2 years ago