The first time trial course from this year’s Giro d’Italia transformed Wednesday into a thrilling out-and-back men’s Zwift Classic race. Racers rode aggressively on both of the steep climbs and everywhere in between.

The racers of the Trofeo Bologna faced a unique challenge, taking on two out-and-back laps of a replica of the first stage of the 2019 Giro d’Italia. This course was originally used as a time trial, but in this event, it hosted a mass start road race for the first time.

The course is 8.2 km one way, for a total out and back distance of 16.4 km. Racers start with a shallow descent from the Piazza Maggiore, then make their way through mostly flat streets for a few kilometers. A small amount of gentle climbing leads riders into a sharp right turn and onto the course’s main hill, which is about 2 kilometers long. This climb is steep and unforgiving, with an average gradient of 9.6% and many sections in the double digits. It has a total elevation gain of 198m. The gradient does ease up a bit near the very top, as riders pass the Sanctuary of the Madonna di San Luca.

In this race, riders hit the climb twice, finishing atop the main hill after riding 24.6 km.

While many of the roughly 70 racers of this Zwift Classic knew the Bologna course, none of them had raced laps of it with a group before. Attacks hit rapidly like punches from a boxer as riders tried to either break away from the group or break it up. The first came from Ryan Goldenberg (Velocity Vixen/Fox), followed by Tom Ove Kaland (KISS Racing Team). Both were brought back quickly on the flatter section of the course. But as Kaland was caught and the peloton started the first climb, Morten Vaeng (KISS Racing Team) used his teammate’s attack to deliver a 1-2 punch! Ryan Larson (DIRT Indoor Specialist) set off in pursuit and took the lead near the top of the climb. Riders were stringing out in single file as racers struggled to stay in contact with the group. 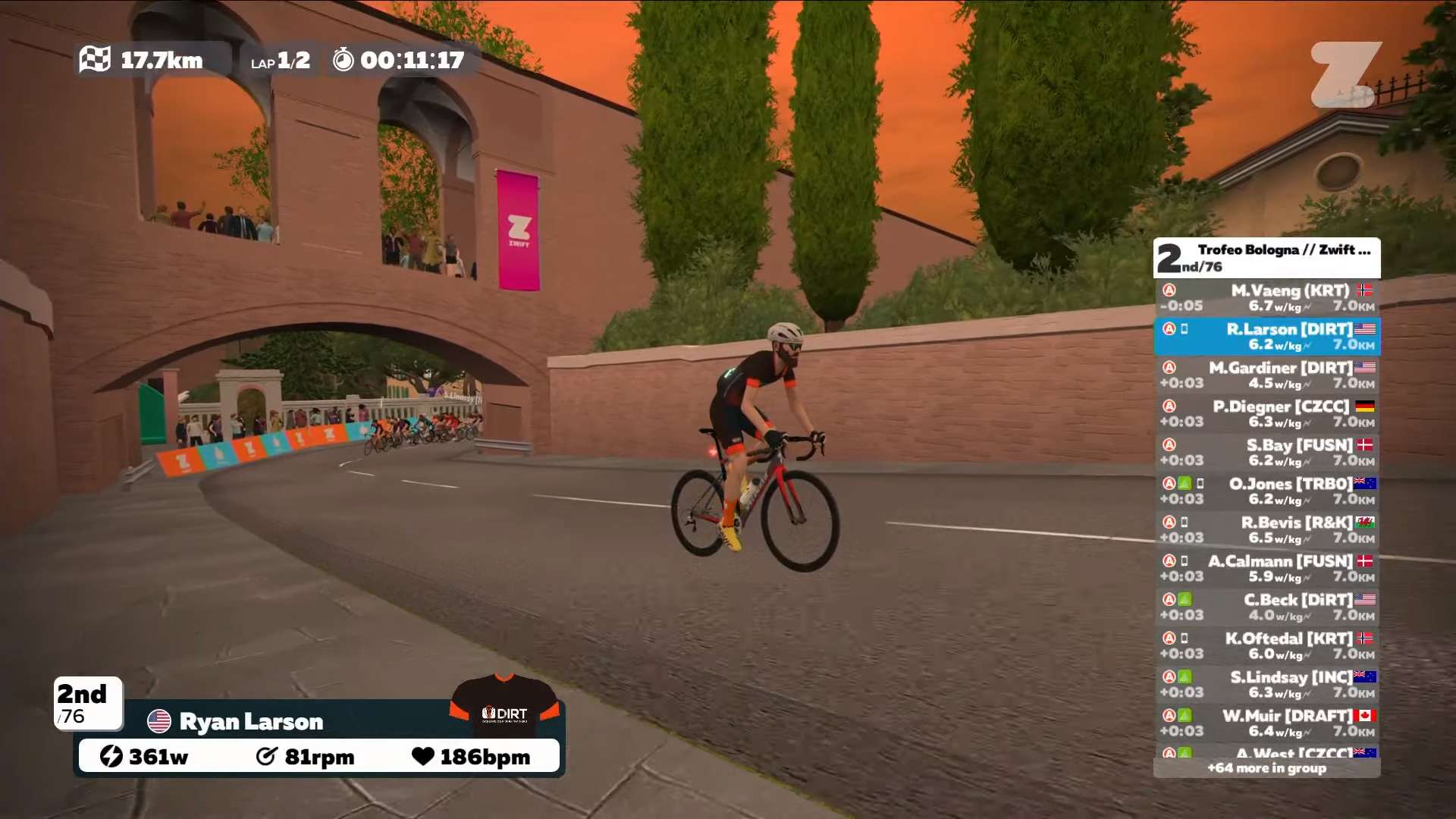 Larson crossed the banner at the top with a 13-second lead and made a U-turn to start the descent. Racers in this Zwift Classic could compete for a King of the Mountains (KOM) title, in addition to going for the win. Riders collected points based on their position crossing the banner both times at the top of the hill. With his breakaway, Larson earned maximum points for the first lap.

Behind him, a group of 11 riders had broken free from the rest. They caught Larson on the descent and started to increase their gap to those grouped behind, which went up to over 45 seconds near the bottom.

Another 10-rider chasing group worked their way closer and closer to the leaders on the flat section. With the help of a big effort from the Fusion ECT racers, they caught up with about 11 kilometers to go. As soon as the catch was made, Ollie Jones (Turbo Squad) attacked! He quickly got a lead of about 6 seconds on the bunch before a few others tried to join him. Larson, Stevie Young (Canyon ZCC), Michael Madsen (Fusion ECT), and Andreas Hertz (Team Sz) sprinted out to try to bridge over. Jones fell back to the group, but his four pursuers stayed ahead as they started the gradual climb to the end of the lap. 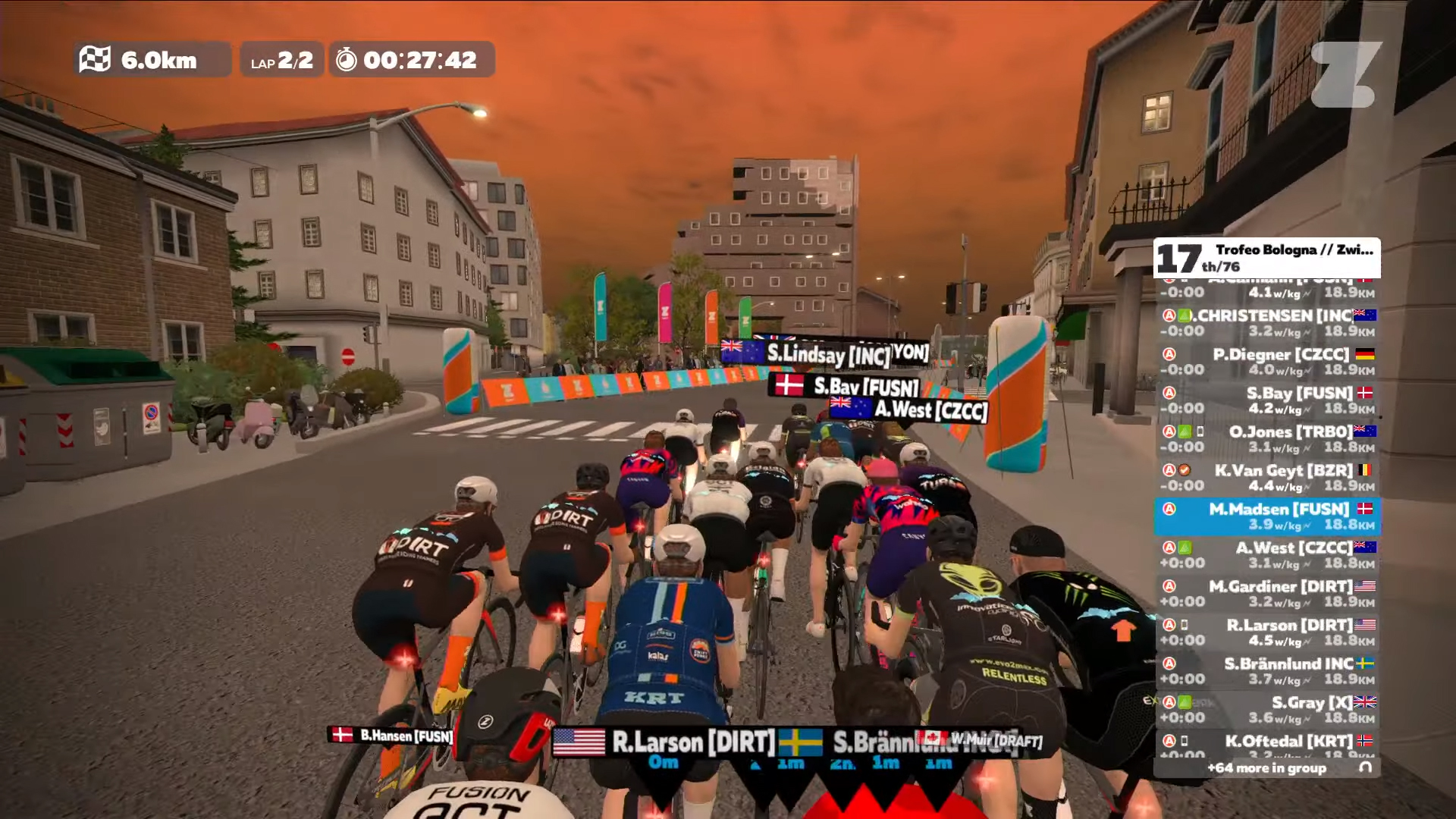 The bunch approached the last climb of the day with 22 riders still remaining. Not everyone was content to wait for the hill. Koen Van Geyt (BZR Cycling Team) attacked on the flat and soon formed a breakaway with Chris Beck (DIRT Indoor Specialist), Larson, and Young. But Van Geyt didn’t seem to want company - he shot off again just before the road sharply turned up. In the end, it wasn’t enough to keep him ahead, and the front of the group caught him partway up the climb. 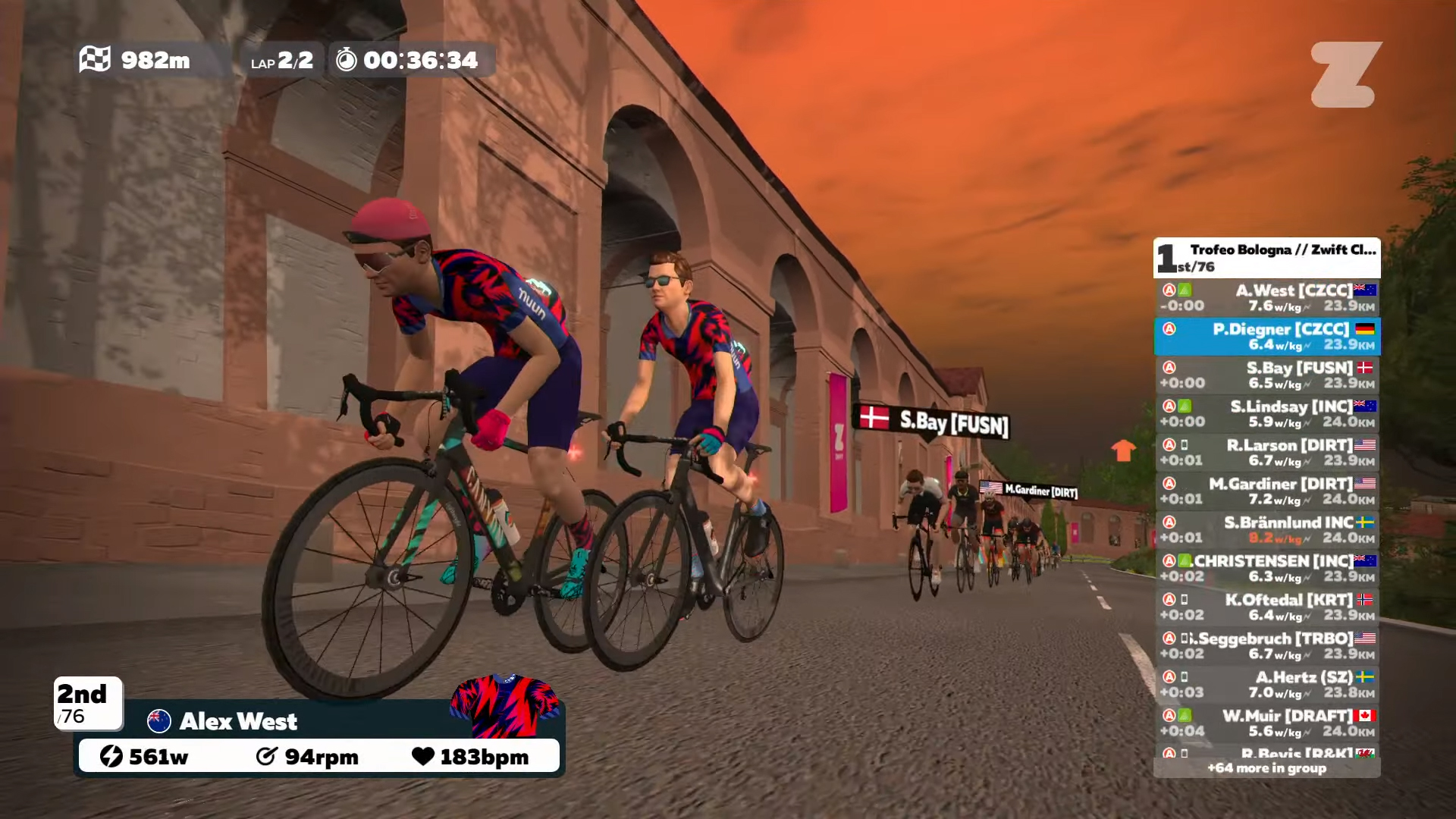 With 1.5 kilometers to go, Philipp Diegner (Canyon ZCC) launched a strong attack on the steep slopes of the hill. Soren Bay (Fusion ECT) led the chase behind. As soon as Bay reached Diegner’s wheel, Diegner’s teammate Alex West went off the front. At first, West dangled just ahead of the group. When the gradient eased slightly for a moment, he seemed to find a second wind and opened up a lead of 6 seconds… then 7… then 8. The riders chasing him dropped featherweight PowerUps with about 200 meters to go, giving them a temporarily lower weight. They couldn’t catch West in time, and the Canyon ZCC rider took the provisional win. 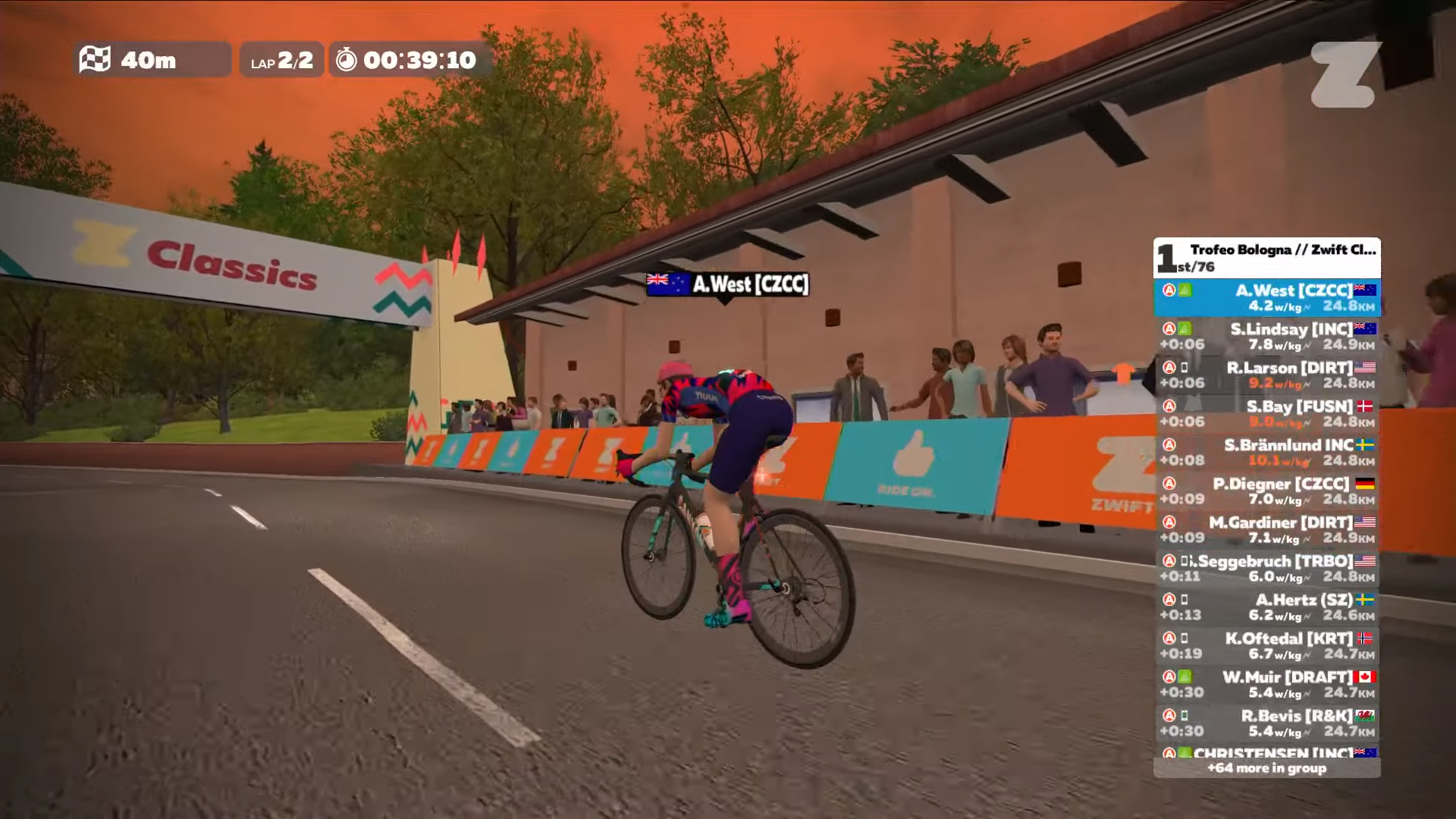 West scouted the course ahead of time to prepare for the hill, but that didn’t tell him how others would ride it.

“It was brutal! I didn’t expect it to be so hard on the first lap up the climb,” he said.

He said he expected the front two groups to come back together on the flat, because his leading group was resting a little. Then came the final climb to the finish.

“My teammates had done a perfect job of control the race throughout and Philipp Diegner attacked halfway up the climb which sparked a reaction from the field,” said West. “I was able to follow the top guys up to Philipp’s wheel and then launch a counter(attack) on the steep section where the draft is the least effective. I knew from riding the climb many times that if I got to the top of the steep section with a tiny gap and then punched it really hard when it flattens out, my gap would extend a lot.”

Third-place finisher Larson said this race “was the hardest race I have ever done on Zwift.” Though he was going for the win, he’s glad to have made the podium.

“There is no hiding and you really get to see everyone’s character reveal itself on this kind of course,” Larson said. “You figure out who embraces the pain and pushes through that barrier.”

On the first climb, Larson said, he didn’t expect to get ahead of the bunch. He just wanted to try to drop as many riders as possible. When he found himself several seconds ahead after covering Vaeng’s attack, he decided to go after the KOM competition.

“I knew the field would be playing a bit of cat and mouse so I knew if I stayed on the power, I would have a good chance to reach the KOM first,” he explained. “I knew I could hold the gap to the top of the first hill, but I knew I would not make it to the second. This is why I sat up and waited for the pack and latched on until the final climb.”