Whether leading a group ride is more of an art or science, Tim Searle seems to have mastered it.

A leader and founder of the Aussie Hump Day Ride (AHDR), Searle has ridden more than 100,000 kilometers on Zwift - one of just a few to reach that milestone so far. And he has spent many of those kilometers riding alongside other people. 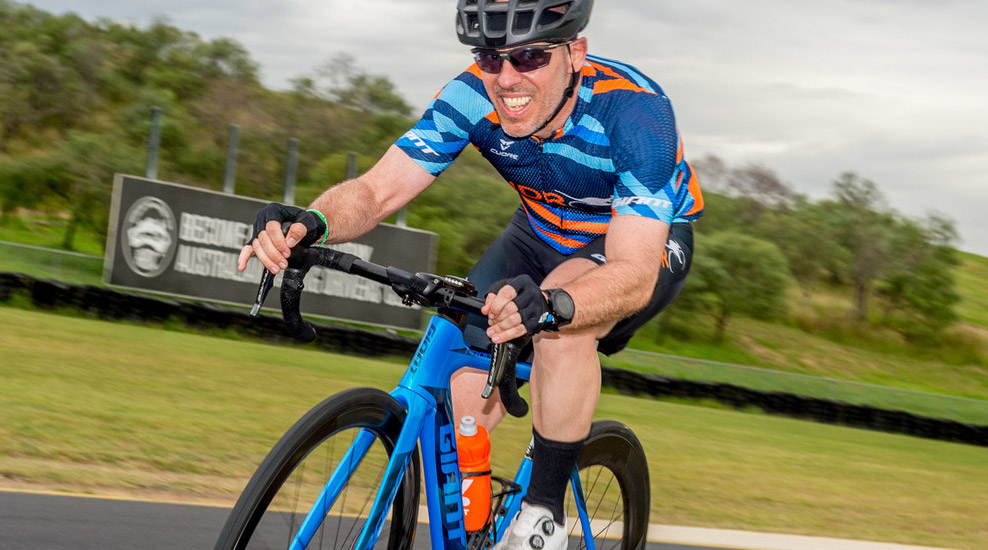 Searle joined Zwift as a beta tester in April 2015, but he only used it occasionally until an accident that October forced him inside.

“I came off (the bike) descending the local Dorrigo Mountain for the first time,” he says. “I was going a little too fast trying to jump groups and got caught out on a corner that tightened out of sight. It was a choice of going off the edge or putting it down at 70 kilometers/hour. I chose to put it down.”

He scraped off a lot of skin and had a few broken ribs. A smashed helmet showed that he also hit his head, though he doesn’t remember that. He rode Zwift while he recovered.

“I got hooked on Zwift when I discovered the social side of the game,” Searle says. “To me, this was completely unexpected. I marveled at being to ride with others from all over Australia and the world.”

Searle lives in New South Wales, and at the time, there were very few group rides that worked well with Australian time zones.

Searle decided to change that, so the Aussie Hump Day Ride was born on a Wednesday in April 2016. The ride now gathers up to 500 attendees each week from all over the world, making it one of the largest recurring rides on Zwift.

“AHDR was created to be a group ride where riders of different abilities could come along and ride with other Aussies. It has something for everyone,” says Searle.

After recovering from his crash, Searle started riding outside again, but he also continued indoors. Searle spends an impressive average of 24 hours a week on his bike. He usually rides 100 kilometers (about 62 miles) a day, split into two sessions. He says he tries to do most of his riding while his wife, Kirsten, and their two daughters are asleep, or before they are home from work or school.

With the benefit of all this experience, Searle has some advice to share with other ride leaders. 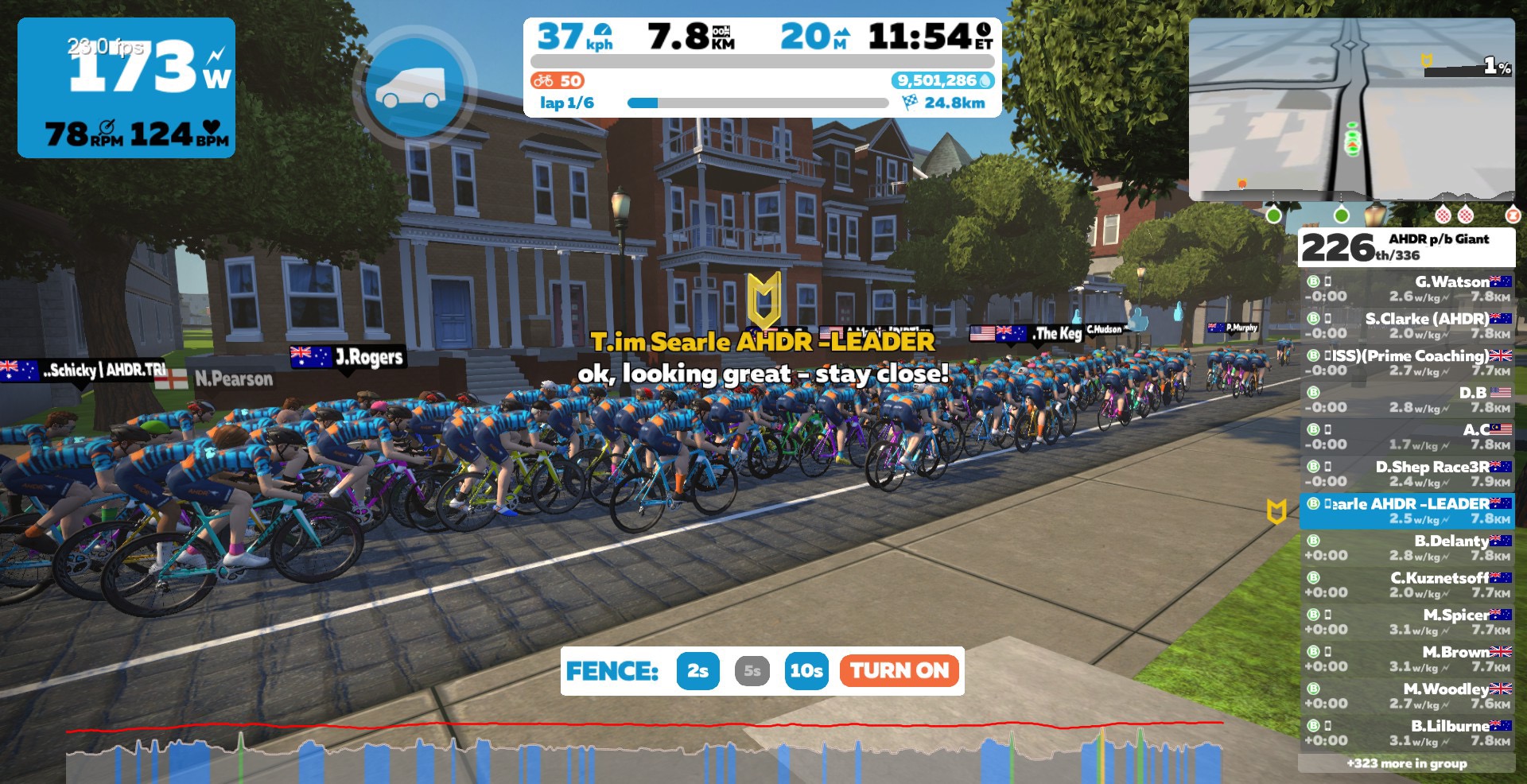 When asked for tips on leading group rides, Searle starts with the basics. Check your equipment and Internet connection with plenty of time before the event. Log on to Zwift early, just in case a technical problem needs sorting out.

Encourage others and have fun

According to Searle, encouragement and positivity are essential to a well-run group ride.

“I also find that if I’m having fun, there’s a good chance that others in the event are too,” he says.

“An easy start is also very important in my opinion,” Searle says. “It allows the group to form which sets the group’s tone for the ride.”

Once the bunch is moving well together, he increases to the advertised pace. It’s important to be predictable as a leader, according to Searle. He says he has seen some ride leaders go too fast out of the gate and then slow down, causing frustration in the group.

Some ride leaders will adjust the pace of the ride to accommodate people who are falling behind, instructing people to slow down or speed up again. Searle, though, says he tries to keep his rides steady and only make small adjustments. No big surges or sudden slowdowns.

“To be honest, our rides are too large these days to tell the whole group to adjust their pace. I've found if I subtly adjust mine it often does the trick,” he says.

Searle says he monitors his own pace closely, using a separate device to track his average watts per kilogram. He also pays careful attention to the state of the group, encouraging riders to stick together when it’s in danger of breaking apart.

“I always prioritize trying to keep the group together,” Searle says. “It's not always easy and can change from day to day and for no apparent reason sometimes. I like to protect the ‘battlers’ at the back of the group, which generally starts with trying to convince the people at the front of the group to be part of the team and work with us.”

This is often the biggest challenge group ride leaders face, but to Searle, it’s worth putting in the effort to make it happen.

“Riding in a large group on Zwift can be uplifting as well as looking pretty spectacular,” he says.

The AHDR leaders have tried many creative strategies over the years. They hold competitions for who can stay closest to the leader’s beacon, encourage people to give out mass “Ride Ons” to those in the group, and promise a race at the end of the ride for anyone who is still with the ride leader.

Zwift has added a few tools that help, too. The latest is a new “fence” that warns riders not to get too far ahead of the leader - or they’ll remove themselves from the ride.

One of Searle’s favorite Zwift memories is from a 24-hour World Team Endurance Ride that members of ADHR entered as a team. The four “Aussie Battlers” were happy just to participate, but they wound up winning the competition. Searle rode the shortest distance at “only” 400 kilometers (about 248 miles).

“The unexpected camaraderie (from 4 people that had never met) blew me away that day,” recalls Searle. “We went through so many emotions but talked each other through it.”

The social side of Zwift is what hooked him and so many others, and ride leaders like Searle are an essential part of bringing Zwift’s community to life.

“I was a little bit of a reluctant ride leader initially, but I quickly found that I really enjoyed doing it, and it is such a rewarding experience,” he says. “I want to see people on their bikes!” 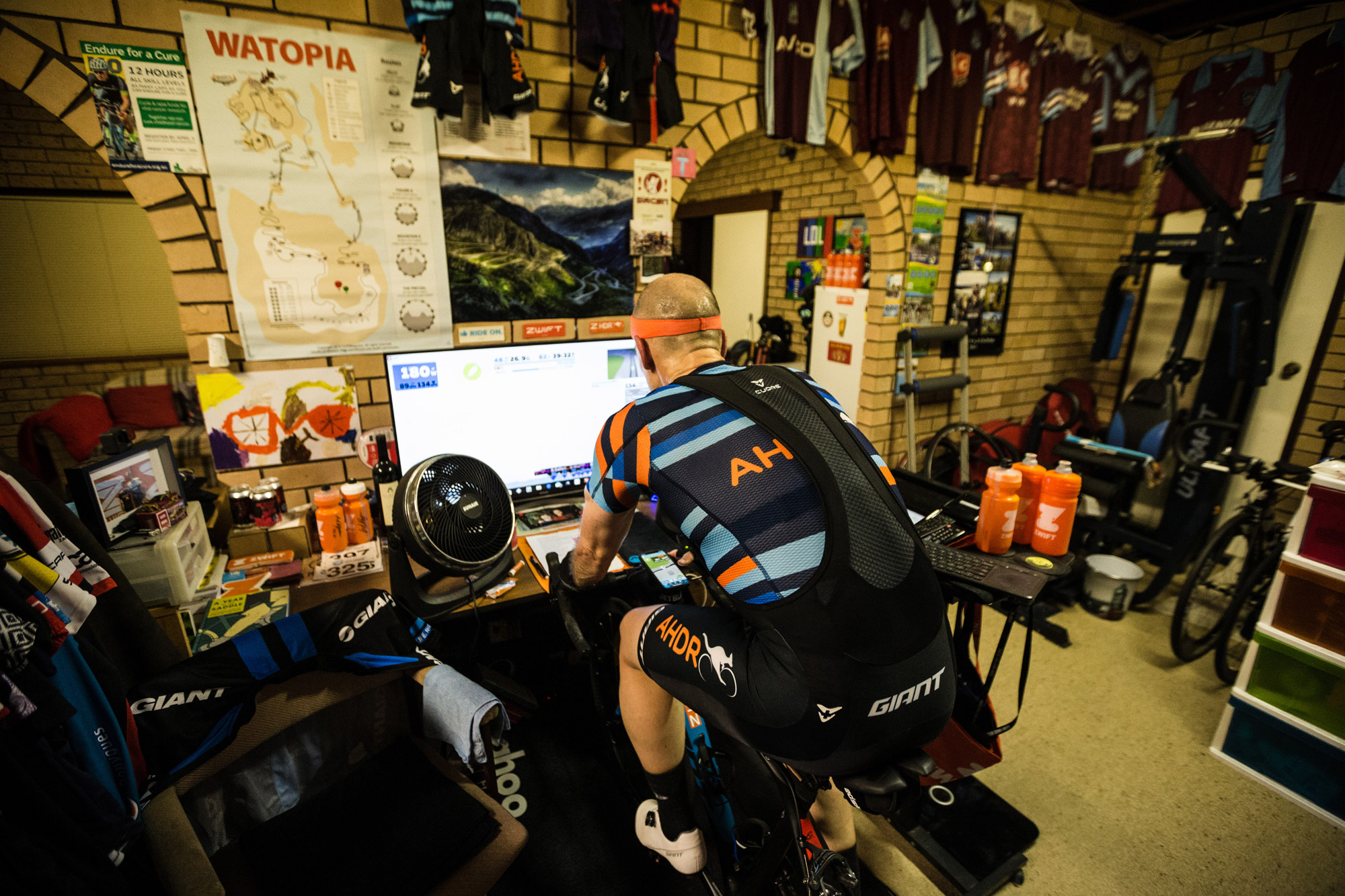 What is a Progressive Run? over 3 years ago