Tell us what you’re up to with GCN, and a bit about your cycling history.

Being a presenter for Global Cycling Network is a dream job. It’s YouTube’s biggest cycling channel, and I get to report on the latest tech, co-host the GCN Show from scenic spots like Italy’s Dolomites, and have a lot of laughs, even while interviewing top pros. I ride my bike while working with fantastic people like Dan Lloyd and Si Richardson. I also commentate on cycling for Eurosport. Nice!

As for my own cycling career, I competed in four different decades, racing against everyone from Sean Kelly to Mark Cavendish. I rode in seven World Road Championships, as well as the 1992 Olympics and the Giro d’Italia in 2000. In 1998, I won the British Elite National Road Championships.

The full-on immersive experience: Smart trainer, mat, big screen TV on a stand with an incorporated fan. Everything’s set up in our games room, which also features loads of retro game consoles. Gaming and cycling heaven.

So you’re a gamer and a cyclist?

I like gaming culture, but I wouldn't call myself a gamer. When I was a kid it was Asteroids and Outlaw on the Atari, and to this day I have a very fond appreciation of retro games and consoles. My real passion is cycling, although now the two have come together. Hello, Zwift! Riding, inside a game. 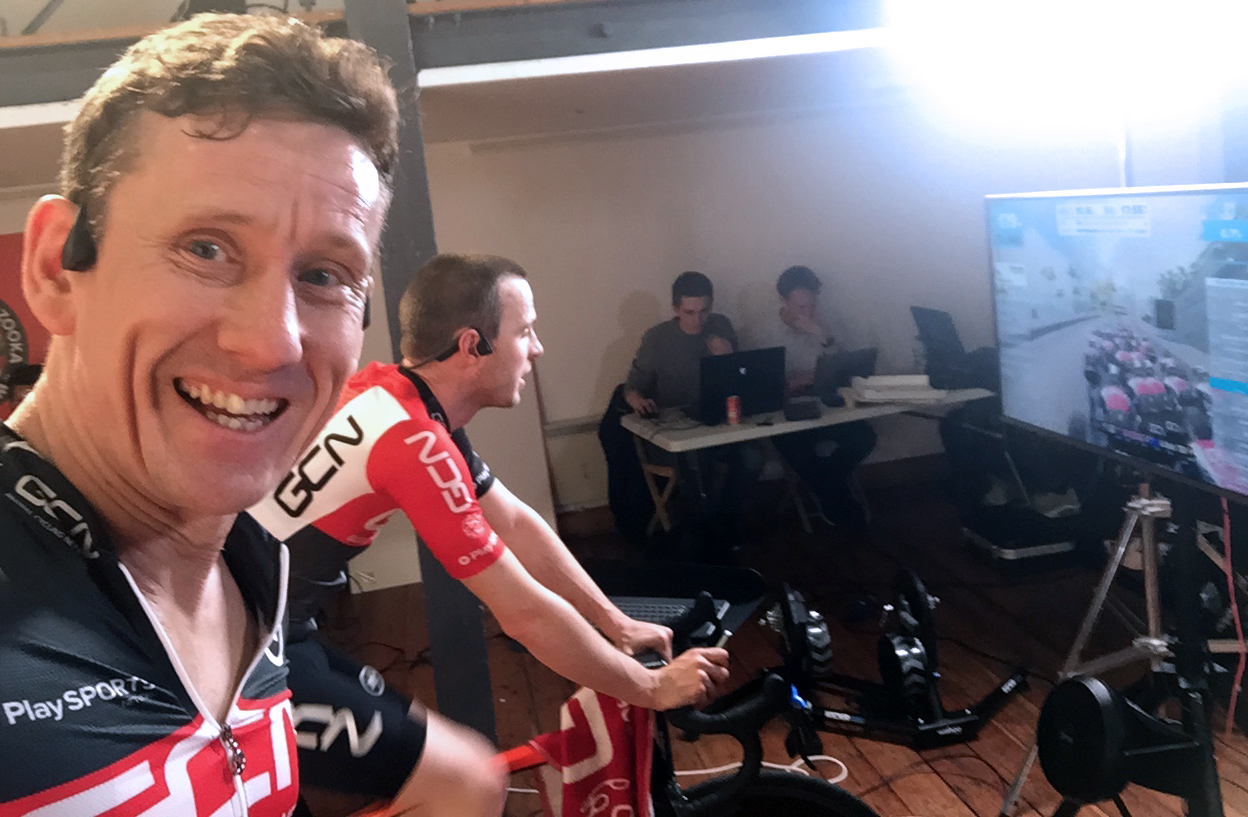 How often do you Zwift?

I like to get on about 3 times a week. I’ll do an intense 45-minute session or even two, and I also ride Zwift on weekends. I’m always up for an epic ride over Watopia’s mountain.

Do you take part in the group rides?

I've tagged along with some groups that I've caught up with, which has been lots of fun. OK, intense. But for me intense is still fun. Maybe I should also say that a few groups have caught up with me!

Are you a year-round Zwifter?

Yup. I Zwift throughout the summer, with the windows wide open, because it’s time-efficient and no-hassle. Same for Zwifting in winter, too. Zwift is focused. It’s safe. No stop signs, or cars to tangle with. I just sometimes push a bit too hard!!

What’s best of all about Zwift?

Zwift allows me to still express myself competitively. Be it against myself or other Zwifters. I never trained to power when I was racing so having all of the metrics to hand gives me extra motivation as I can track my progress and still push myself, even though I have no desire to actually 'race' again. The course choice is fantastic, of which the epic mountain is my favorite, although I do Watopia laps the most.