The “leg snapper” hill snapped the peloton to pieces, but the racers wouldn’t let the Rund um Innsbruck break them.

The Rund um Innsbruck took place on 3 laps of the 8.7 kilometer Innsbruckring course, totaling about 27 kilometers. This course features some of the same roads as the 2018 UCI Road World Championships in Innsbruck, Austria. Each lap, the racers tackle a short, steep hill about 450m long at an average grade of 7%. This kicker has been named “The Leg Snapper” for good reason! 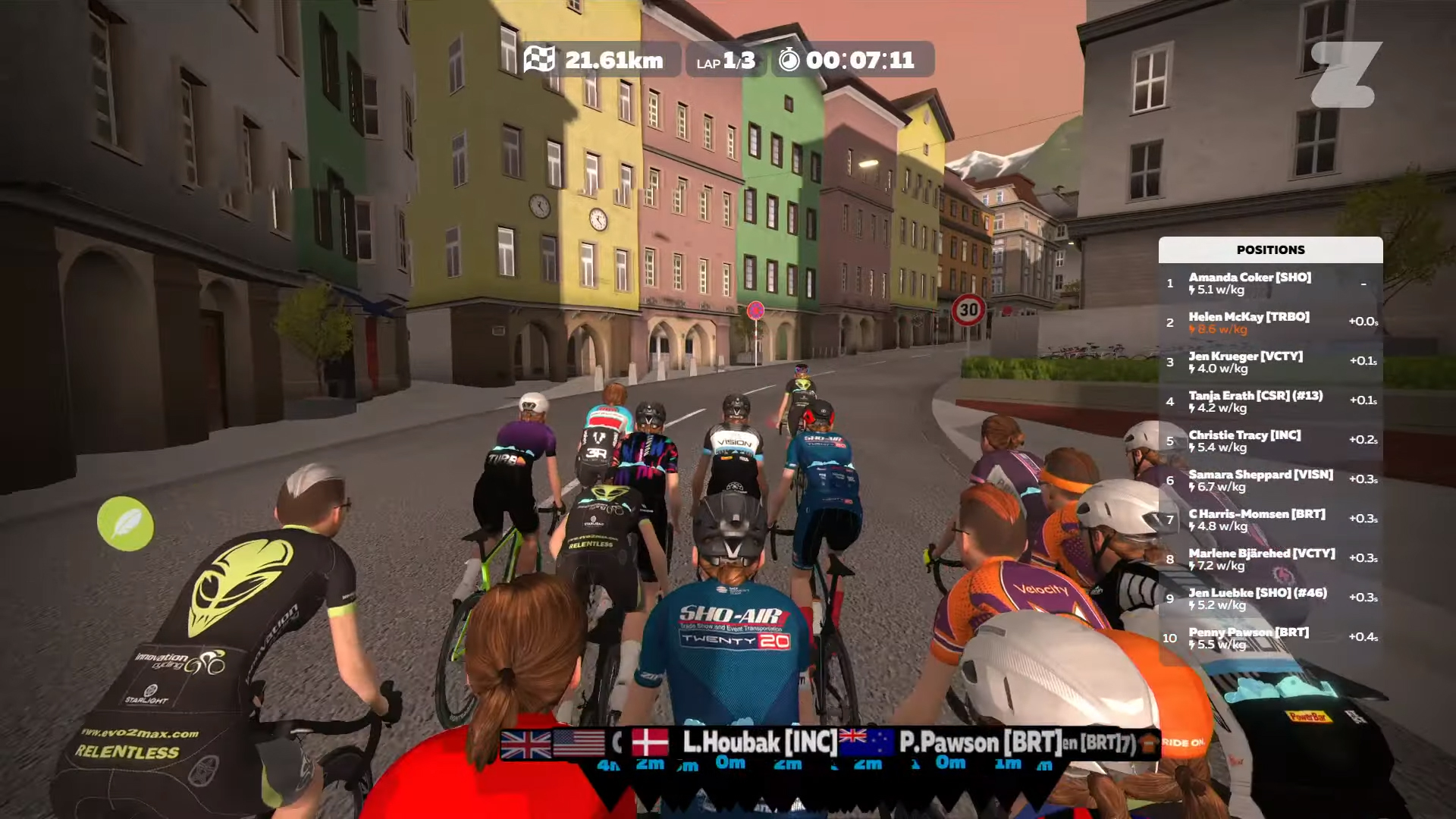 At first, the 42 starters all stayed together in this women’s Zwift Classic. But they were just waiting for the first time up the Leg Snapper. Team Innovation took control of the first climb, with Louise Houbak and then Cecilia Hansen setting a hard pace. Marlene Bjarehed (Velocity Vixen/Fox) and Rosamund Bradbury (Turbo Squad) also came to the front. Soon, a lead group of six riders formed, with a gap to several small groups of riders behind. As the racers descended and reached flat ground, though, the groups started coming together again.

In the sprint classification, riders collect points based on their position crossing the sprint banner on each lap. Tanja Erath (Canyon//SRAM) made a break for the first sprint with a “ghost” invisibility PowerUp. Kristin Falck (Canyon ZCC) started her sprint at the same time. Falck used a drafting truck PowerUp to slingshot out of the bunch, but she couldn’t overtake Erath’s sprint and was second across the banner.

By the start of the second lap, the front group contained 17 riders, and another group of 12 worked to chase them down. The gap grew out over 15 seconds and then slowly began to shrink, with Ella Harris (Canyon//SRAM) leading the charge behind. Just a few kilometers later, the groups merged. 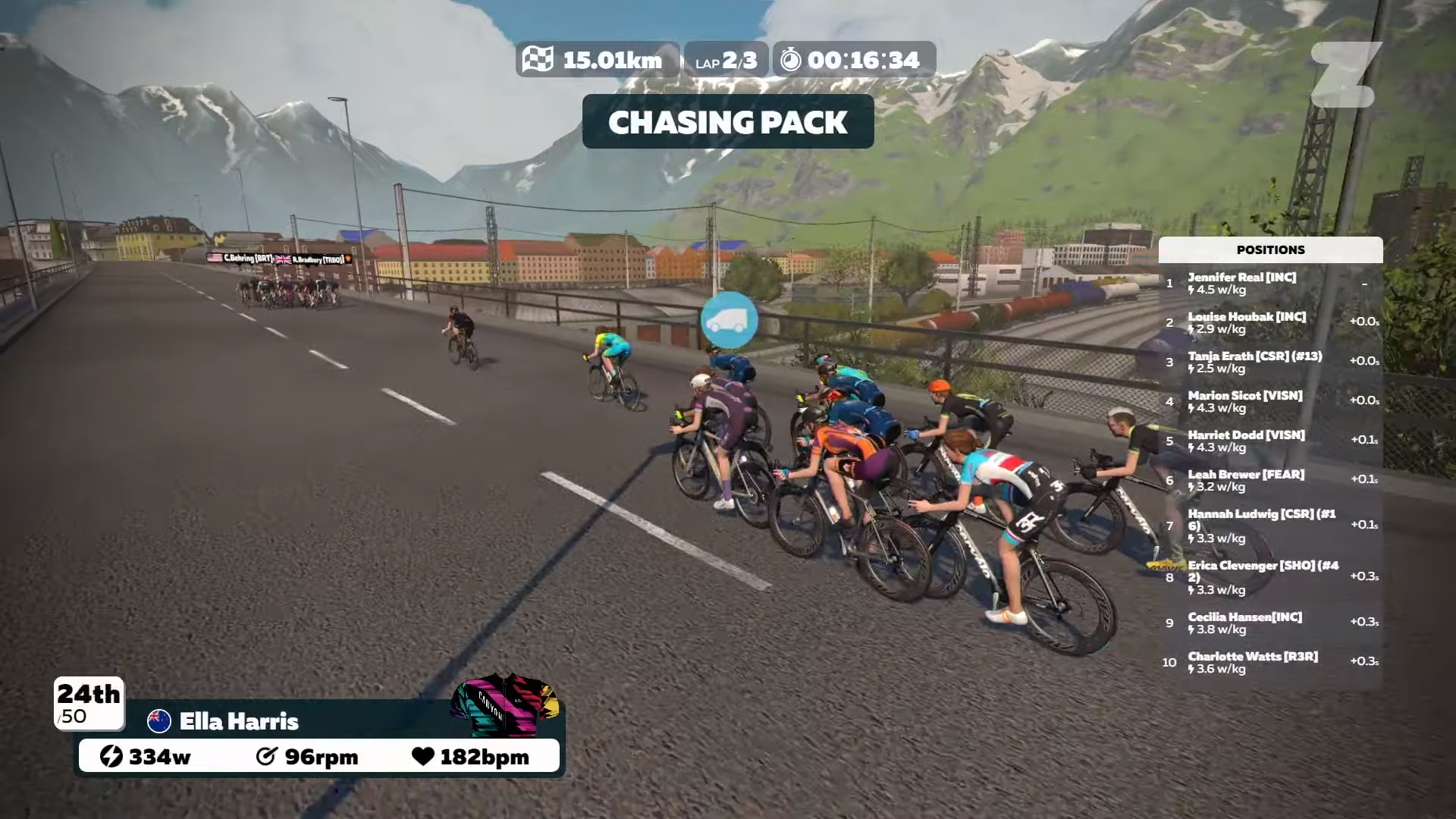 On the second climb, it was Helen McKay (Turbo Squad) and Jennifer Real (Innovation) who took the lead. The bunch stretched out and broke apart again as they tried to follow. Erath stayed with the front and went for the intermediate sprint again, but Hansen came around her at the line.

The leaders were down to 11 racers. Was this the final selection? Not if the 10-rider chase group had anything to say about it!

The chasers started the lap almost 30 seconds behind. Now they knew that the catch was possible. They clawed their way back to the front with the help of Leah Brewer and Laura Epelbaum from Team Fearless, who had missed the breakaway. Falck and Bjarehed tried to speed things up by attacking as the groups were about to merge. It didn’t work, though, and the bunch swelled in size again.

The women stormed up the last climb as hard as ever, leaving about a dozen survivors by the intermediate sprint. Samara Sheppard (Vision) used an undraftable burrito PowerUp to try to snag maximum points, but Erath shot ahead to claim them once again. 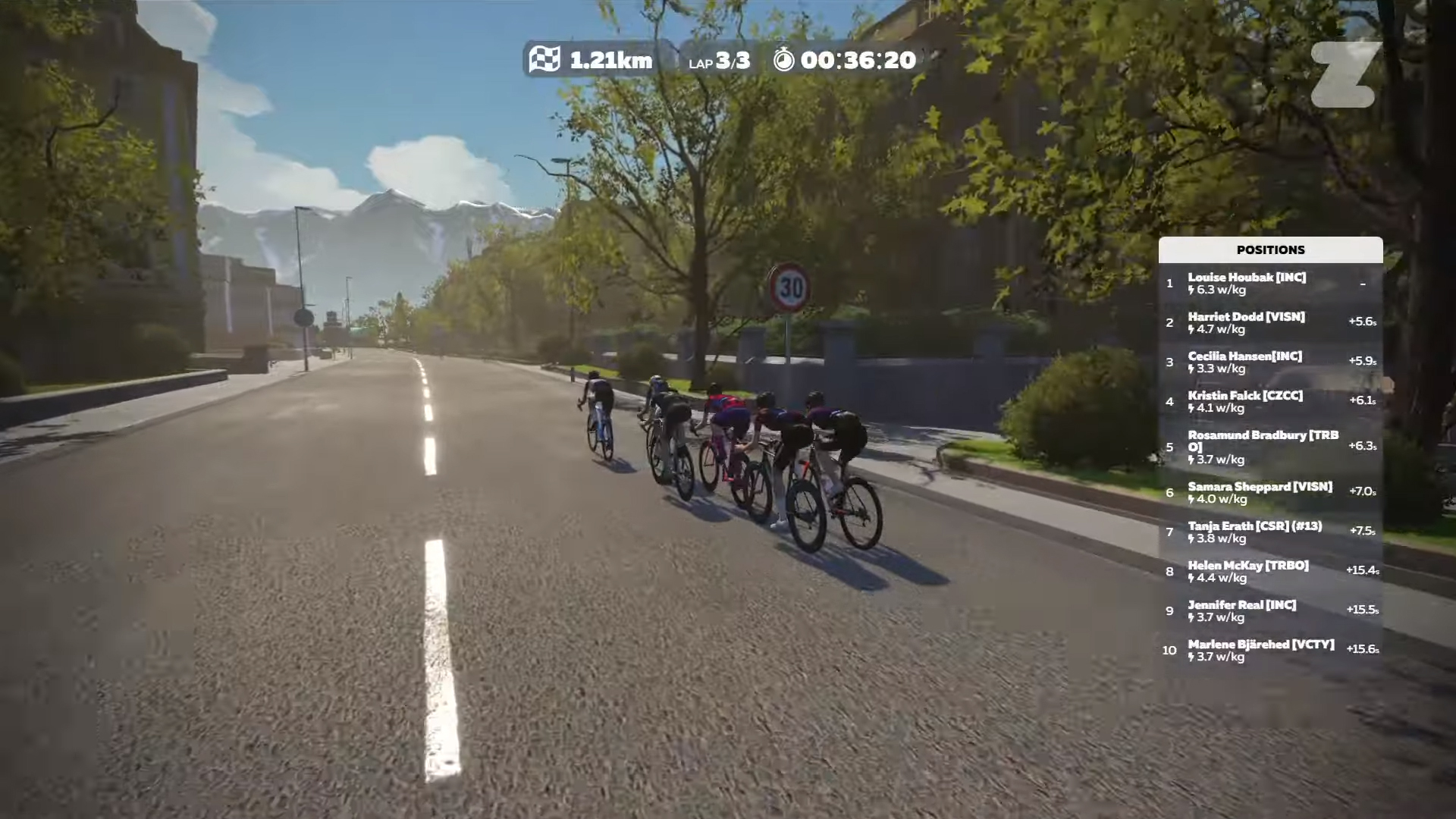 Then Houbak dropped an aero helmet PowerUp and went on the attack! Less than 2 kilometers remained until the finish. Harriet Dodd (Vision) led an effort to bring back the Innovation rider, but the gap kept growing. Soon it was 10 seconds, and then 15. By the time they opened up their sprint, it was too late. Houbak crossed the line solo as the winner! 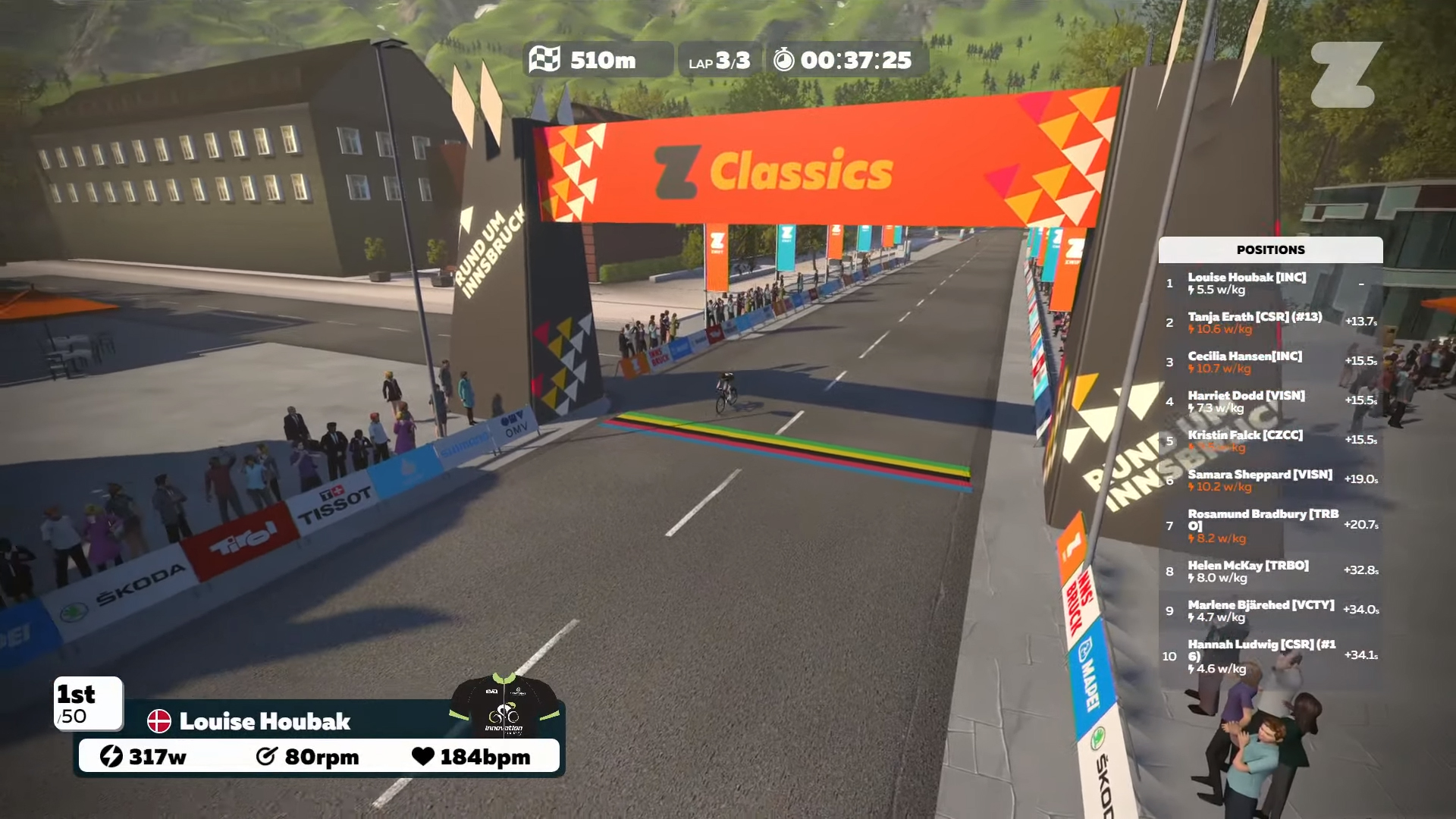 Louise Houbak, who has won races in a solo attack before, said this was her plan from the start. She would go long, and her teammate Hansen would wait for the bunch sprint.

“I knew I had the legs today and felt good so I was confident this could work with the right timing for an attack,” she said. “I’m really really happy. It means so much... because of the high level of racers in these kind of races.”

Samara Sheppard, who took fifth place for Team Vision, said she had a “moment of hesitation” when Houbak went. By the time she chased, she could not catch the attacker.

She said she wasn’t surprised to see the peloton re-form every lap, because there was no team effort to drive the front group.

“It was hard to maintain momentum on the long flat section with so many strong riders around and chasing from behind,” Sheppard said. “We just used the flat section to recover somewhat before the next attack up the climb.”

One of those who kept chasing back was Ella Harris, who didn’t expect to be able to regroup.

“Normally once you’re gapped in Zwift it’s really difficult to get back on,” Harris said.

With some recent hard training and racing in her legs, Harris knew she wasn’t fresh, but the climb on each lap was still harder than she thought.

“It was the fastest I’d been up there in a race, and I was still getting distanced when other times I’ve hung on,” she said.

“It’s really great that Tanja got to showcase her power tonight and perform well on a platform that has given us and the team so much,” Harris said.