A classic route in this men’s Zwift Classics race set the stage for both climbers and sprinters to battle it out.

The Watopia Cup racers faced four fast laps of the Hilly Route, for a total of about 37 kilometers (23 miles). This is where the first races were held on Watopia, so long-time Zwifters know it well. Near the start of each 9.1-kilometer (5.7-mile) lap is the Watopia KOM/QOM climb – 1 kilometer long and an average 5.5 percent grade. It starts out steep, flattens out in the middle, then gets steeper again before a false flat to the top. There’s a bit of flat and rolling roads before the descent, followed by a mostly flat section. After the sprint banner, a sharp kicker leads into a few rolling hills. Finally, a false flat downhill run-in flattens out just before the finish line.

The race started with a bang, as riders only had one kilometer of flat ground before the first climb. The peloton of more than 60 men immediately began to stretch out as it snaked up the slope.

Near the top, Spencer Seggebruch (Turbo Squad) powered off the front of the group, and Andreas Hertz (Team Sz) caught and came around him to cross the banner first. The racers regrouped after the climb, but now they numbered 40. 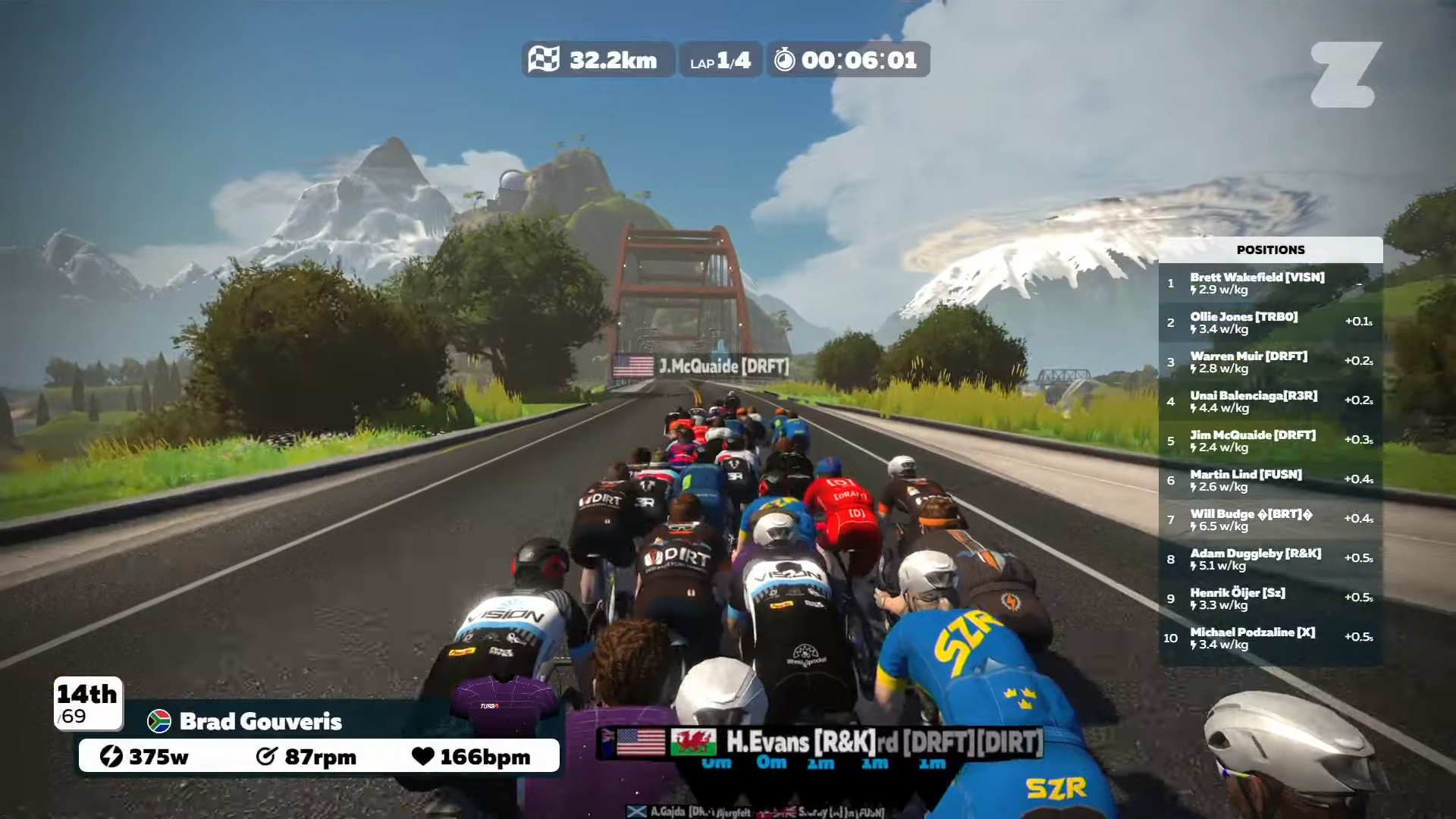 That first hill was the start of a fierce battle among Seggebruch, Hertz, and Fabian D’Evola (BZR Cycling Team), while the rest of the peloton fought to keep up. They were competing for the King of the Mountains (KOM) classification. Riders earned points according to their position across each banner at the top of the main climb, with the first one across getting the most points.

Hertz repeatedly set a tough pace from the start of the climb, trying to wear out the competition. The other two tried to disrupt him. On the second time up, Seggebruch attacked with an aero PowerUp. Hertz and D’Evola followed, and Hertz just managed to come around to cross the banner first. On the third and fourth climbs, D’Evola was the one to attack – first with a feather PowerUp, then slingshotting out with a draft truck PowerUp. But both times, Seggebruch got the better of him and ultimately topped the KOM classification. 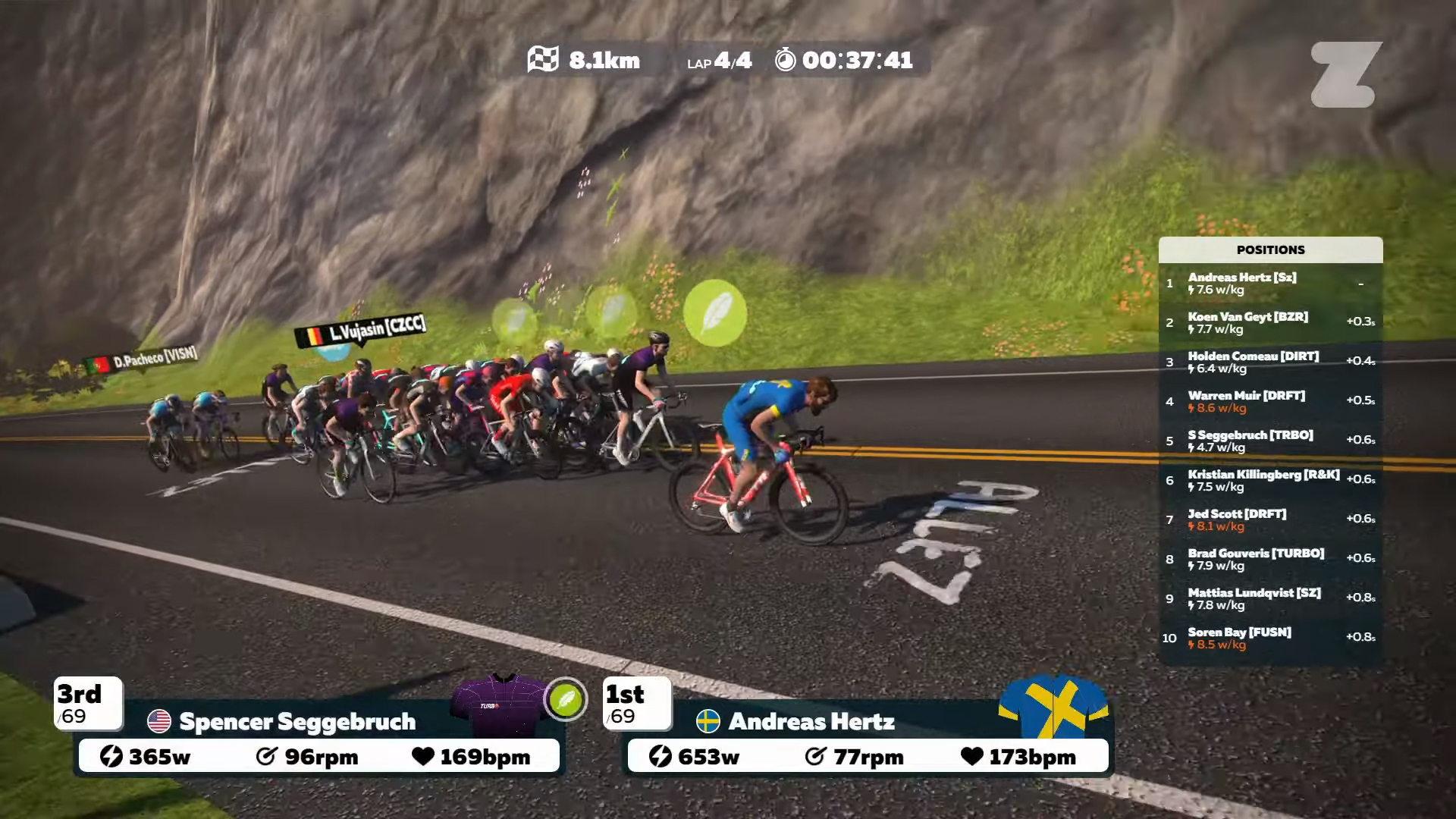 Each time up the main climb, the peloton grew smaller. After the final ascent, there were 27 riders left in the bunch. Even though Jones had already secured the intermediate sprint classification, he still had a dig at the banner. Vujasin crossed first this time and found himself ahead of the bunch with Jones, Jim McQuaide (Team Draft), and Chris Beck (Indoor Specialist). It looked for a moment like the four might work together as a breakaway. 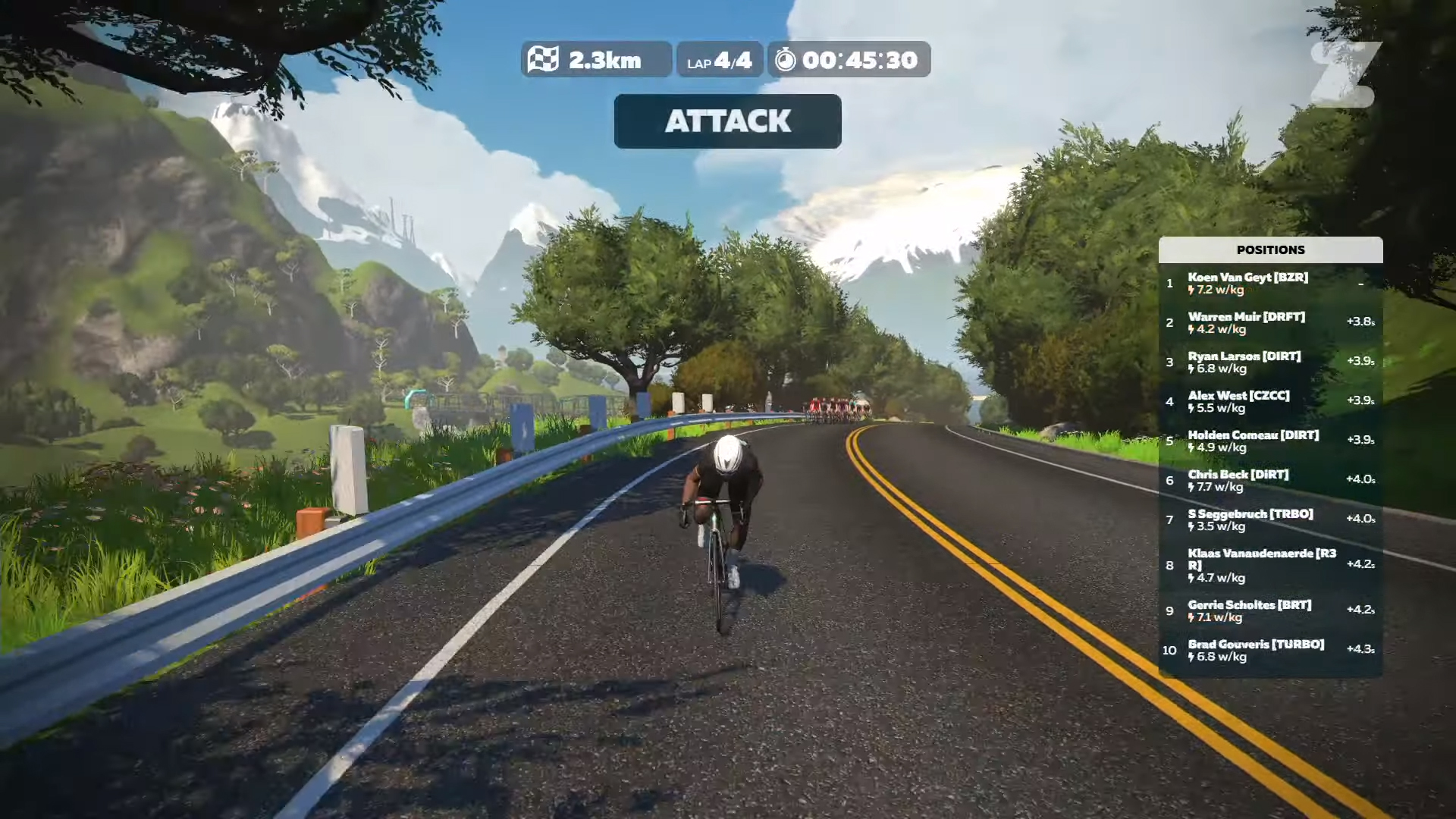 Then Koen Van Geyt (BZR Cycling Team) shot up a short kicker hill like a rocket, quickly getting a 3-second gap! He used an aero helmet PowerUp over the top, stretching his lead to nearly 10 seconds with just 2 kilometers to go. Behind, Beck responded with an attack out of the group. Beck caught Van Geyt and used a draft truck PowerUp to slingshot around him, launching his own attack for the finish line. The peloton picked up steam behind with big efforts from Canyon ZCC’s Vujasin and Turbo Squad’s Seggebruch, whose teammates wanted a bunch sprint. The attackers were caught with 1 kilometer to go. 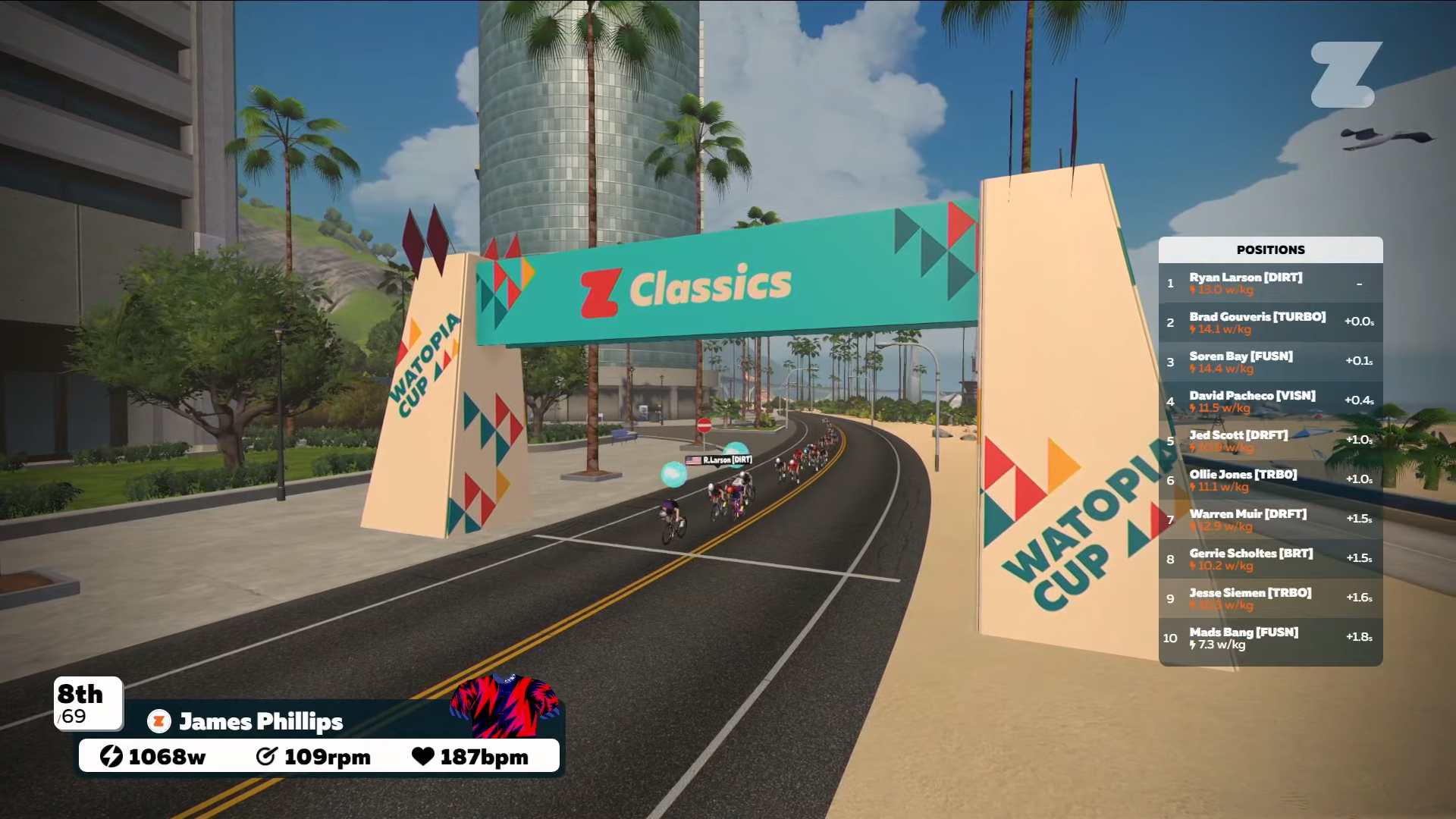 Since the Zwift Classics were announced, Brad Gouveris had his eye on the Watopia Cup. Then he broke his collarbone in July. He raced the Trofeo Bologna a few weeks later in a sling and struggled through it.

“My team had a lot of faith in me to pull this off and I’m very grateful for their help and support,” he said. “I’m ecstatic to have pulled this win off for them. I had no idea what kind of form I was on so the win was very special for me.”

He said Turbo Squad didn’t start the race with a plan, but it came together about halfway through the race. Gouveris had good legs, so he would go for the bunch sprint.

“My finish line was at the top of the last climb because then I knew it was a sprint for the win,” Gouveris said. “I felt really strong going over the climbs so I knew I was having a good day.”

Chris Beck’s teammate Holden got second place. He said Indoor Specialist was trying to keep the pace slower on the climbs to make sure Holden didn’t run into difficulty.

Before chasing Van Geyt’s attack, Beck had a go at a breakaway in the third lap. It didn’t last long, but he was feeling good and wanted to bait out the others.

“I jumped there just to remind everyone that our team is still in the mix and to distract them from our ace in the hole,” Beck said.

Also trying an attack or two was Adam Duggleby (Rowe and King), a multi-time track and para-cycling champion. He said he’s in good form thanks to his training for the upcoming Para-cycling Road World Championships, where he’ll be a sighted tandem pilot for a visually impaired cyclist.

“I maybe shouldn’t have gone for the sprints though, as I suffered too much on the 3rd climb and ended up getting dropped from the group,” Duggleby said. “I really enjoy racing on Zwift. It's super hard and great training.”