The men raced Zwift's new Yorkshire course today while pro riders converged on Yorkshire outdoors for the 2019 UCI Road World Championships. The race came down to a pack sprint, with one rider showing the perfect mix of timing and power needed to win in Harrogate.

The men faced two challenging laps of the 2019 UCI Worlds Harrogate Circuit in the Yorkshire Gran Prix race, for a total of about 28 kilometers (17.4 miles).

Yorkshire is the newest course on Zwift, and a GPS-accurate replica of the finishing circuit for this year's UCI Road World Championships. The course is rarely flat, requiring racers to pay close attention and dig hard if they want to stay with the front pack. The longest climb on the circuit is the timed King of the Mountains (KOM) section, which is 1.2 kilometers (.75 miles) long, averaging 5.5 percent grade. Each lap also includes a slightly uphill sprint segment, and the race ends with a tough uphill finish in downtown Harrogate.

The race was hard and fast from the beginning, and the 81 starting riders flew up the long, straight Harlow Hill climb which begins just after the start banner.

The first attack came from Mads Bang Andersen (FUSION ECT), with a counterattack following from Nigel Clarke (BRT). Together Andersen and Clarke managed to create a 4-second gap on the peloton, but soon enough the group proved too strong, and the two riders were reeled in. 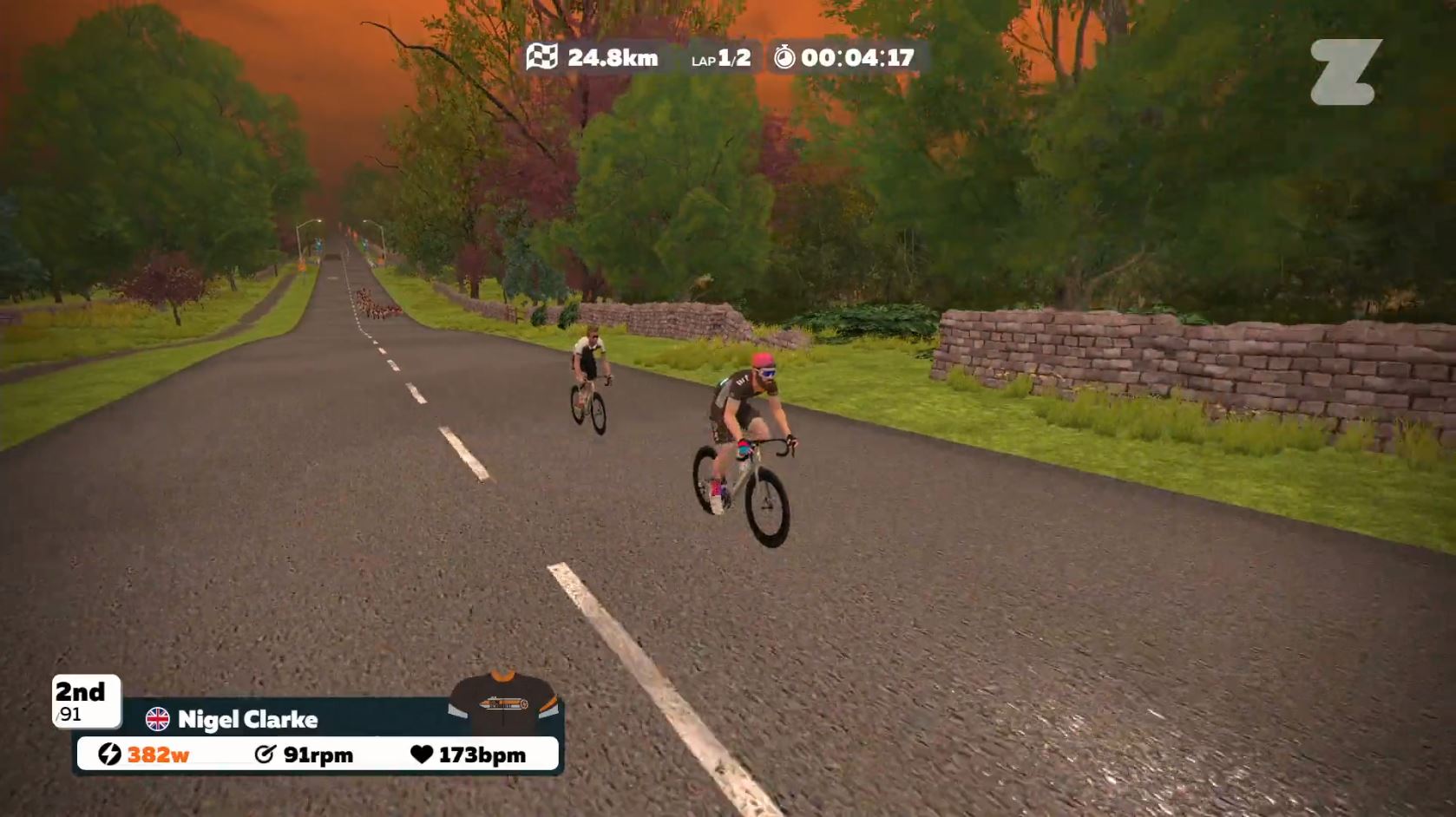 The next attack came from Chris Beck (IndoorSpecialist) who put in a dig after Pot Bank to create a 4-second gap as the riders descended to the base of the KOM. But as the large group of racers hit the KOM, the feather powerups flew and the attacking group quickly caught Beck.

With a KOM competition on the line, one rider wearing a traditional Yorkshire flat cap attacked hard. It was Lionel Vujasin (CANYON), and he finished the climb 3 seconds ahead of the next rider! 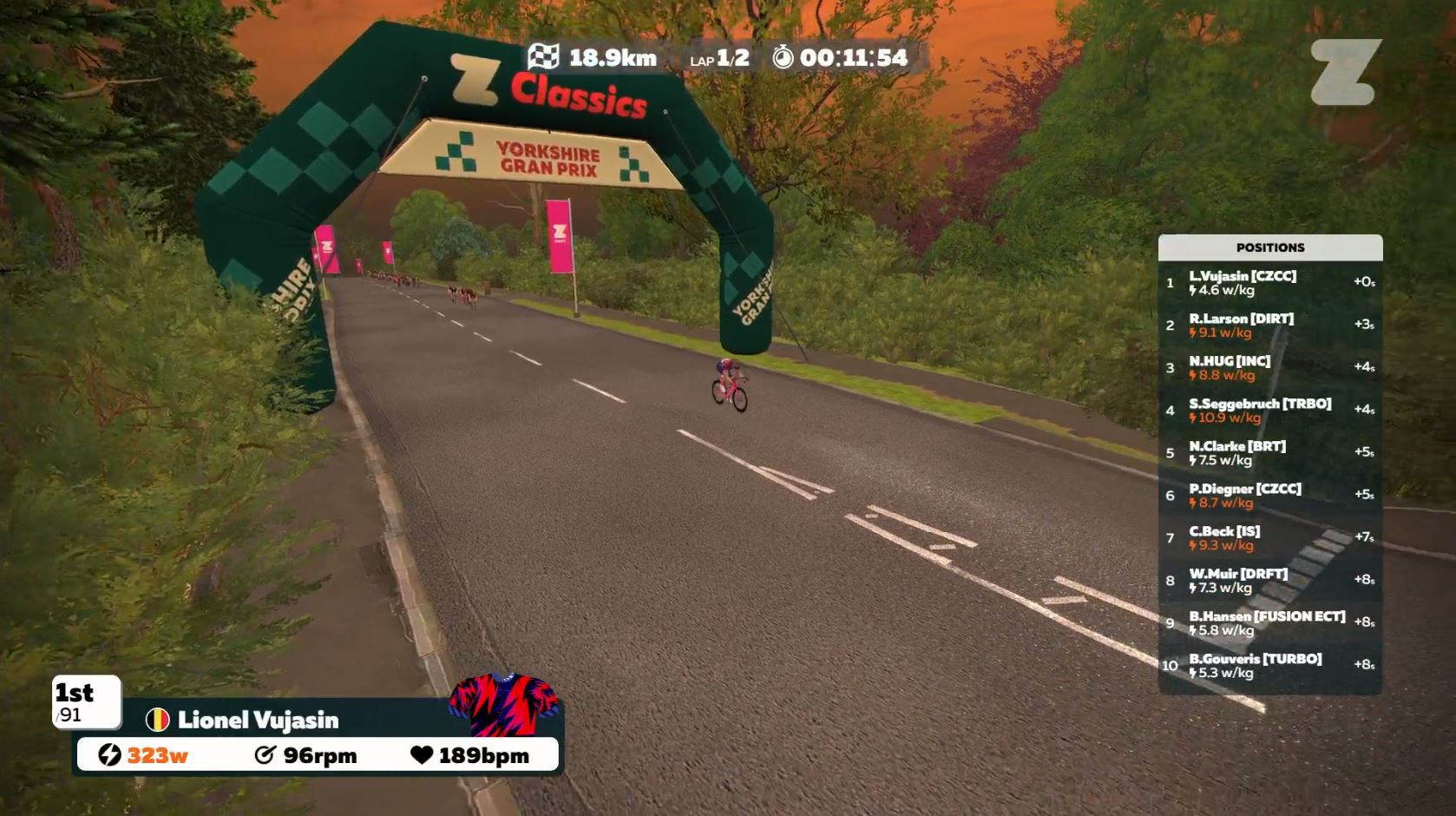 The group was whittled down to 59 riders, and the attacks were coming hard and fast. As the riders began the first intermediate sprint, Bruce Bird (DRAFT) jumped with a perfectly-timed burrito powerup. But Vujasin held his undraftable wheel then flew past, taking first in the sprint. It must have been that lucky hat! 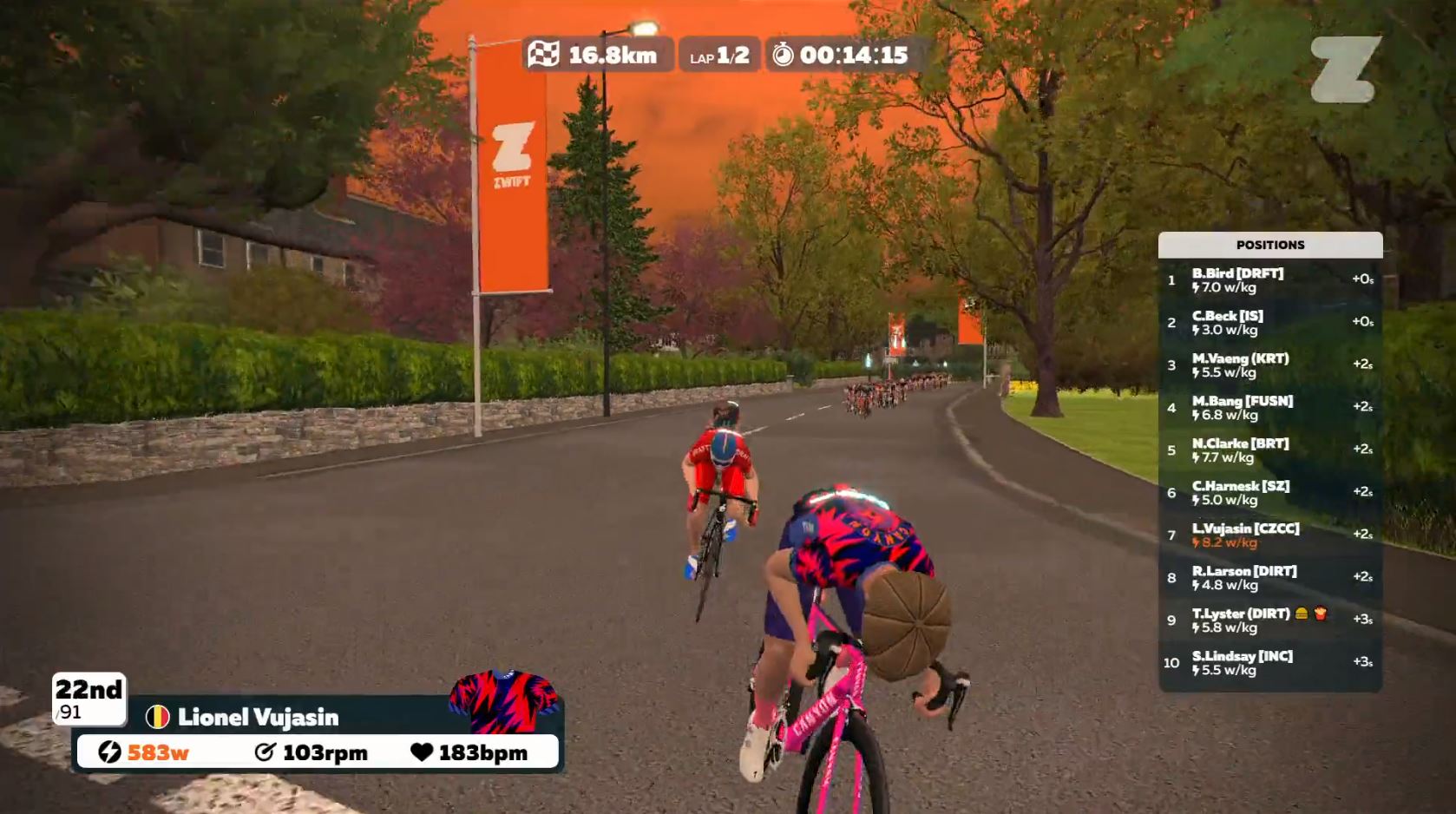 The front group contained 45 riders as it passed under the lap banner, and everyone stayed together up Harlow Hill until Bird dropped another burrito-powered attack at the crest of the climb. Beck chased him down, then Michael Nim (DBR) attacked, and Beck chased him as well, counterattacking and gaining 15 seconds on the group as they descended to the base of the KOM. 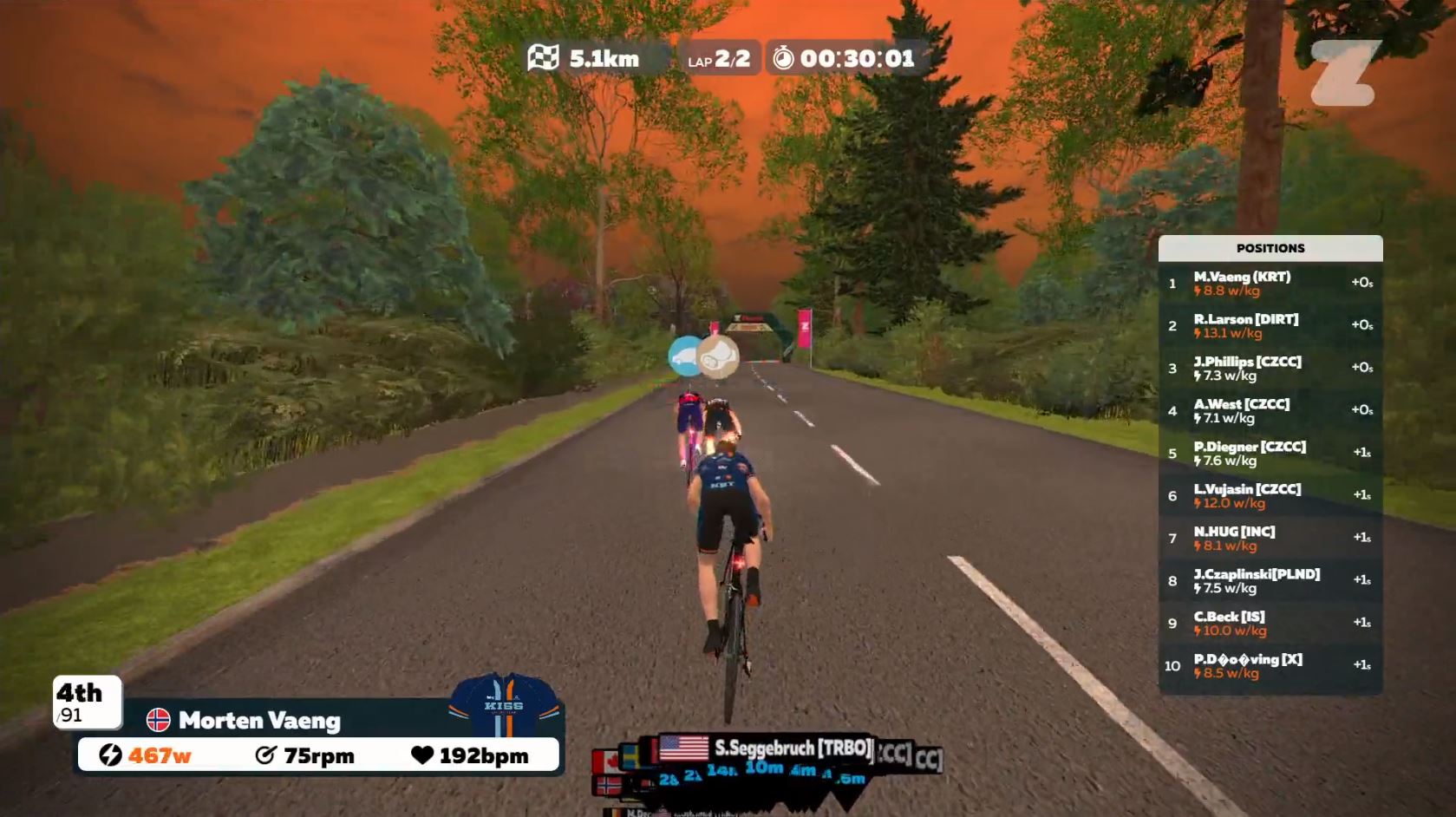 The charging peloton quickly swallowed up Nim and Beck as riders pushed hard up the KOM. Vujasin and Ryan Larson (IndoorSpecialist) battled to the line, with Larson just edging out Vujasin for maximum points in the KOM classification.

A reduced selection of riders came together on the KOM descent. With 22 men contesting the second intermediate sprint, Bird and Vujasin both attacked from the front using aero powerups, but it was Bird who beat the everyone to the line this time. 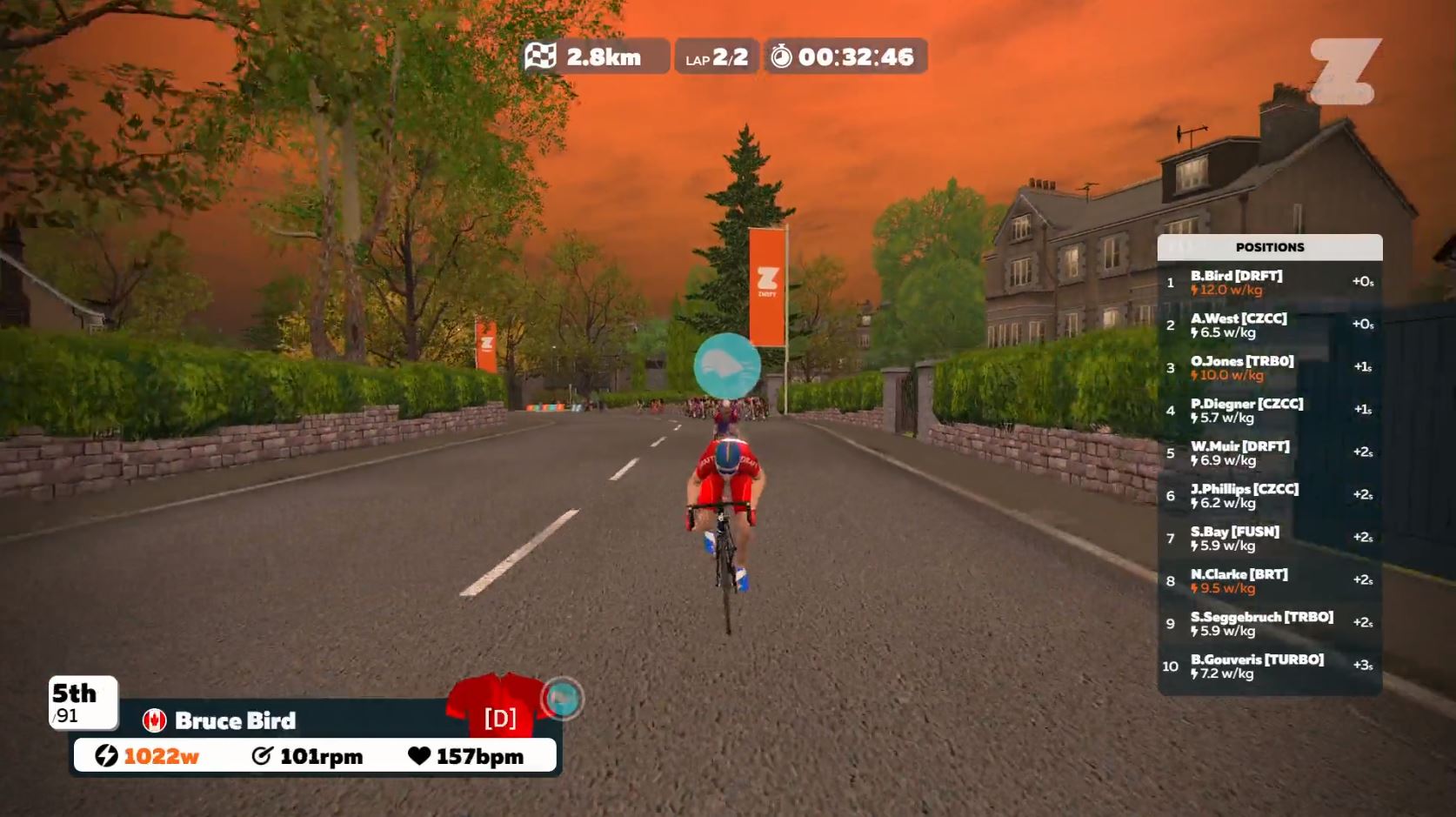 Then the group eased up as they descended toward the finish, with everyone knowing the final stretch would be a long, hard drag. No more attacks came until the riders turned to head uphill, past the Zwift Draft House and toward the finish line. 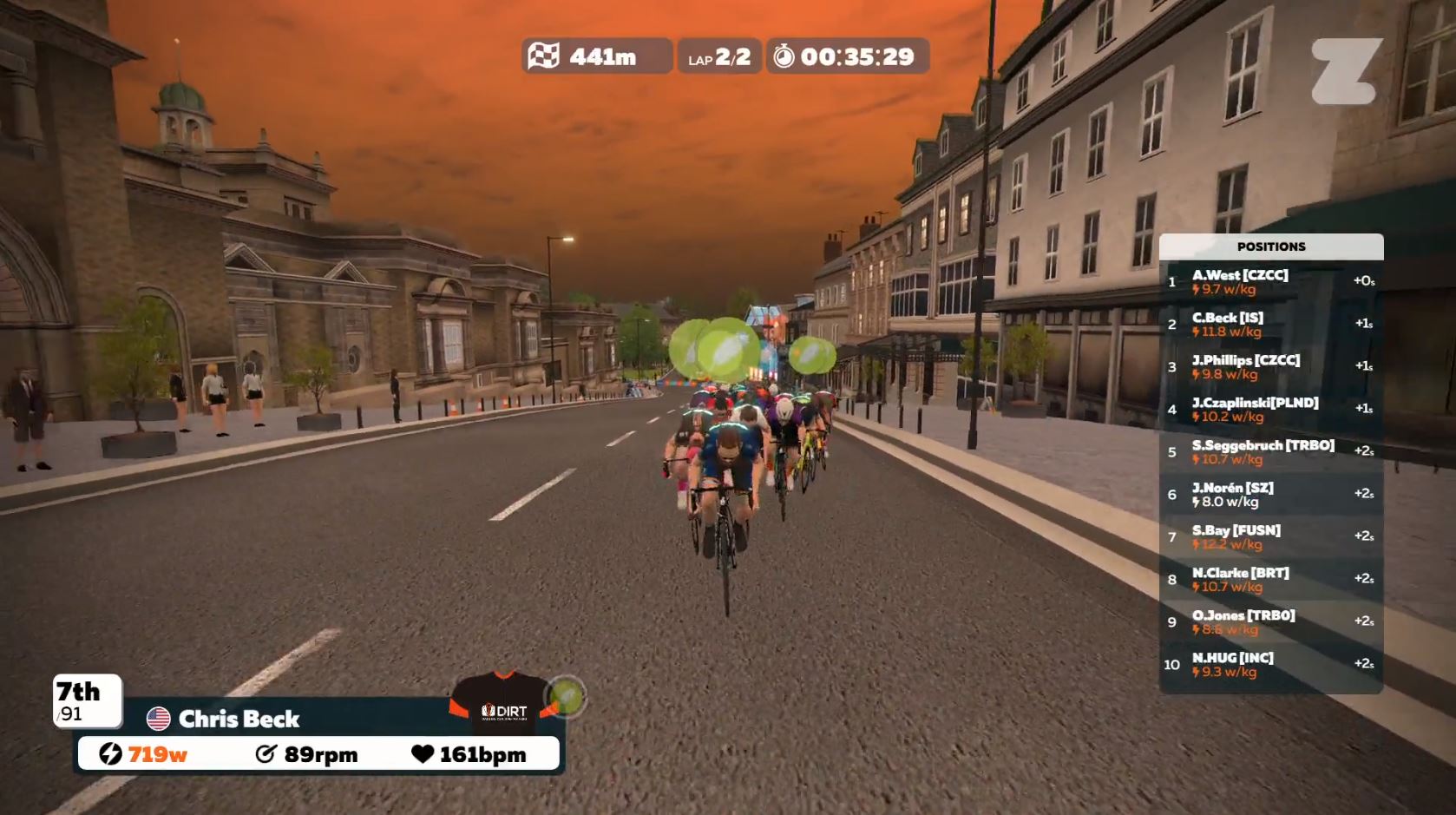 Feather powerups flew as the peloton pushed hard up the initial incline, then James Phillips (CANYON) jumped early and jumped hard. It looked like he had made the winning move, but three riders slingshotted past in the final meters. In the end, it was the perfectly-timed effort of last month's Watopia Cup winner Brad Gouveris that took the win. 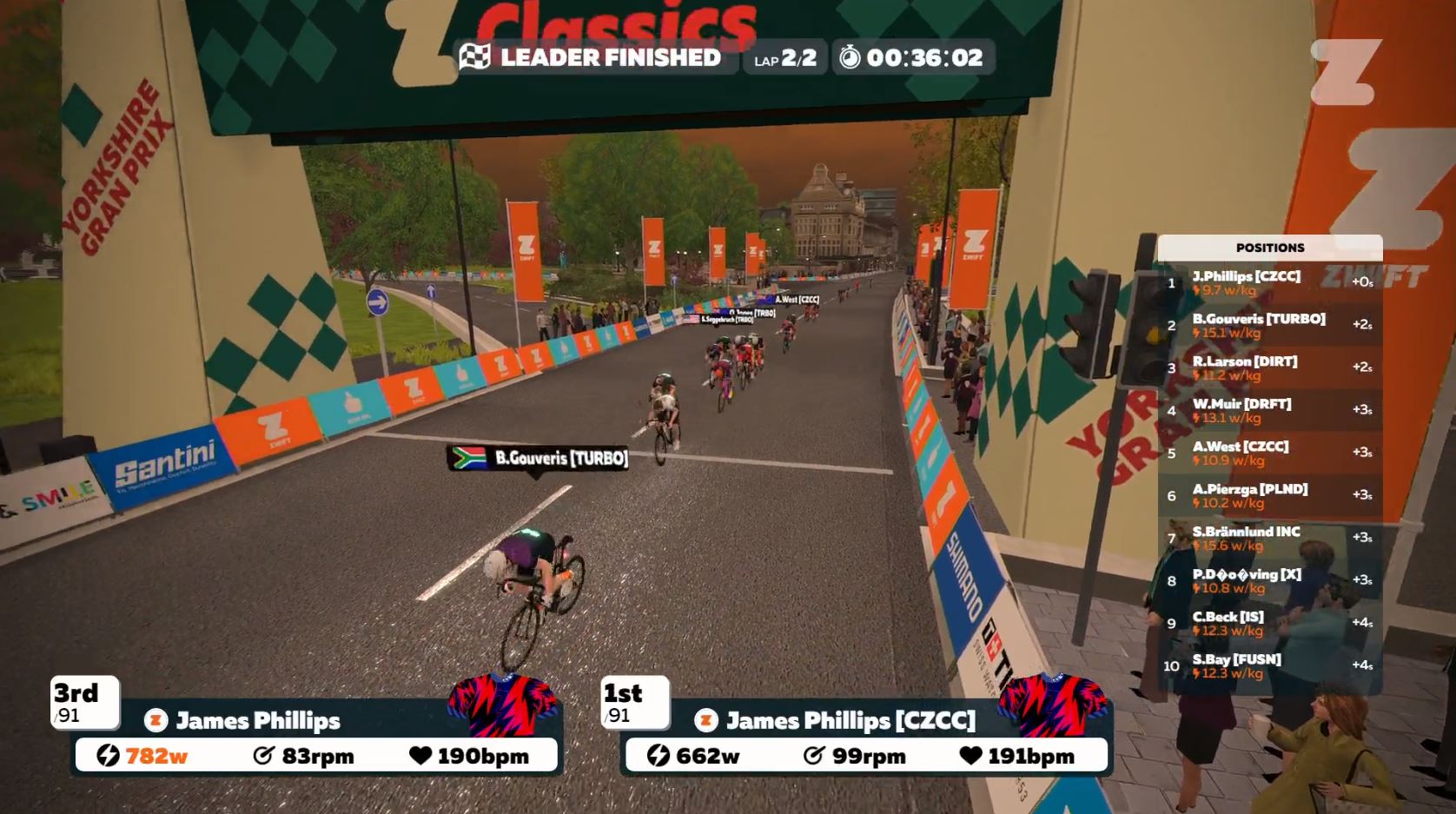 Second-place finisher Søren Bay said, "This was a bloody hard race. I really like the course though: the hills fit me well and ensure that everyone burns some matches just to sit in."

It all came down to the final sprint, and the Yorkshire finish requires strong 1-minute power and impeccable timing. Søren seems to have both. "I knew the sprint would be long--already starting at the little hill 600m before the finish line," explained Søren. "So you have to be careful not to push too hard too early."

The aggressive riding of two particular riders stood out in today's race: Lionel Vujasin (CANYON) and Chris Beck (IndoorSpecialist). Vujasin hadn't planned to go after the KOM and sprint classifications, but when the legs feel good, what else can you do?

"I actually told the guys I would keep it quiet today and wait for the final sprint, but I couldn't resist going for the 1st KOM," said Vujasin. "It was one of those days where you can barely feel the pedals. The first sprint was just because I was well placed so I went for it. It wasn't the plan at all!"

Vujasin went on to tie for 1st in both the KOM and sprint competitions, but it came at the cost of a higher overall finish. He said, "The battle in the second KOM with Ryan Larson just killed my chance for the final. I had to go way beyond my limits and I wasn't able to recover in time. It was a pity because I think this final suits me well."

Beck was working for a teammate. "Holden Comeau is the best finisher in the game so I am always super motivated to make sure that he is in a position to unleash his sprint in the finale. My role as captain on the road allows me to seize opportunities when they arise, and following the wheels of the best riders on Zwift like in today’s race would be a good bet. But as you saw when the peloton stepped on the gas, the riders up the road were as good as caught."

Even though his attacks didn't stick, Beck was happy his efforts could help his team meet their goals. It's all part of a bigger picture he sees. "My team focuses on animating every race. We use the weekday races as training for big events like today. We are preparing for the future of esports. And it’s here."