Russell Schwartz started riding and racing bicycles when he was 15, in the 1970s. But after he opened his Philadelphia jewelry store in the 1980s, he found less and less time to ride. He got into triathlon and rode in the 1988 Ironman triathlon in Kona, but the business kept growing. He didn’t have enough time to train for or travel to competitions, so he stopped racing.

“I was just riding at night, but barely, and on Sundays,” Schwartz says. “In the wintertime, I was just training on rollers, which was just so boring– out of my mind boring. I would only last a half-hour on rollers watching Tour de France videos.”

Once he found Zwift during its early beta phase in 2015, Schwartz renewed his love for the bike and found a new way to compete. Now he has ridden more than 240 Zwift races! He rides many types of races, but most often, 60-year-old Schwartz lines up for ZHR Masters races. Schwartz hasn’t gone back to racing outdoors, but he did get competitive again recently at the three-day Haute Route Asheville.

Schwartz talked to us about age-based categories, his strategy for racing on Zwift, and why he’d encourage anyone to give it a try. 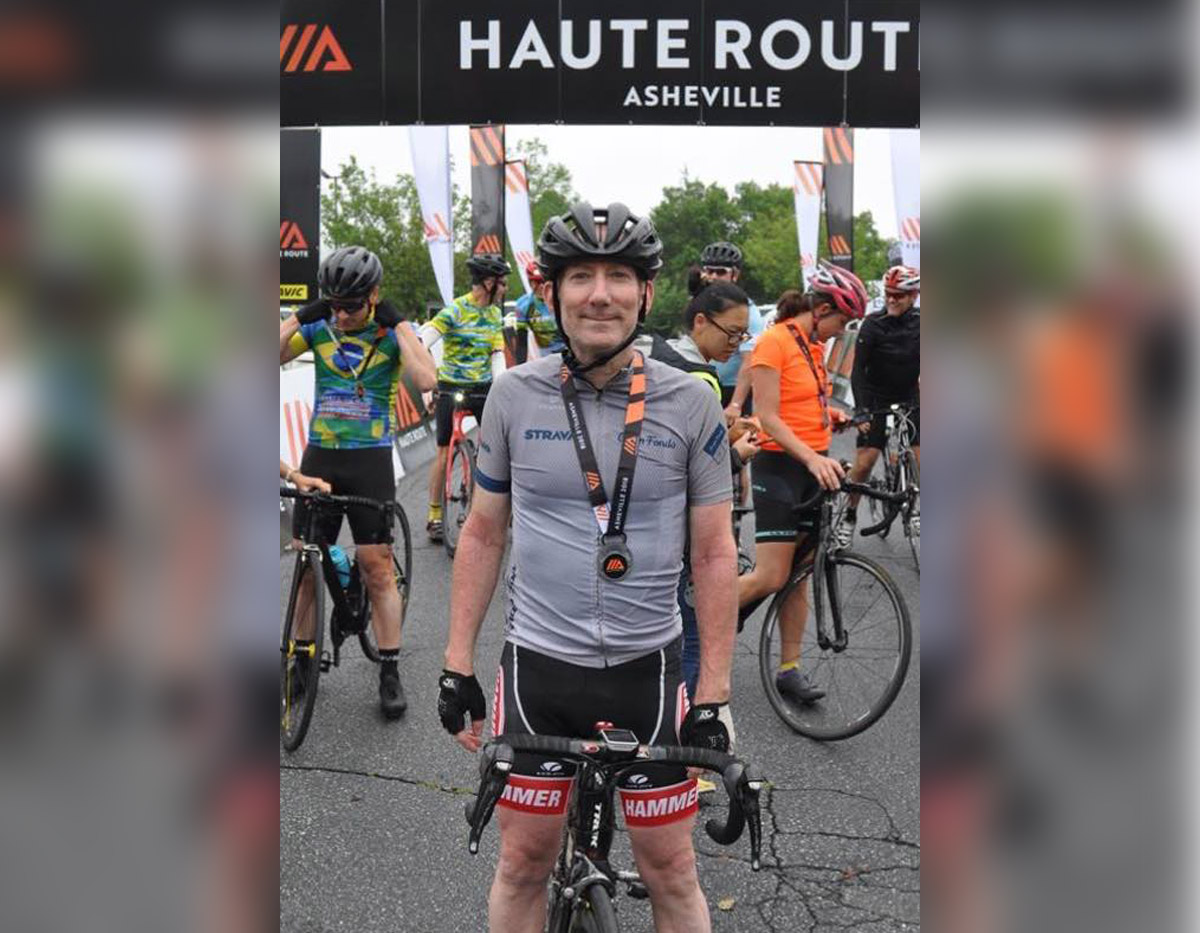 Why did you start racing on Zwift?

I missed the competition, honestly. I loved racing bicycles. I just loved triathlons.

Then Zwift came around, and then they started having races. I said, “Oh my God, this is so fun.” I literally told my employees, “On Tuesday night I have to leave at 5 because there’s a race at 7, and I have to go.” My manager would lock up the store, and I would run home and down an espresso, warm up, and race. I started in the D group and I did well, so they automatically push you up to C group, and I did well and now I’m up to the B group.

How does your outdoor racing experience compare to Zwift racing?

When you start at that starting line, it’s unbelievable how it is so realistic. For me, I have a pain cave where I stream it to my 42-inch TV, and I turn off the lights. I have set up my avatar so my view is looking over the handlebars, so I’m in the race, and I’m drafting off people.

It is incredibly accurate. I go a few miles per hour faster than I would outside. Some things are different, but the way I race is how I used to race… I am at my limit. I give everything. When I am done, I am done. After I finish a race, I’m just slowly pedaling because that’s all I can do. 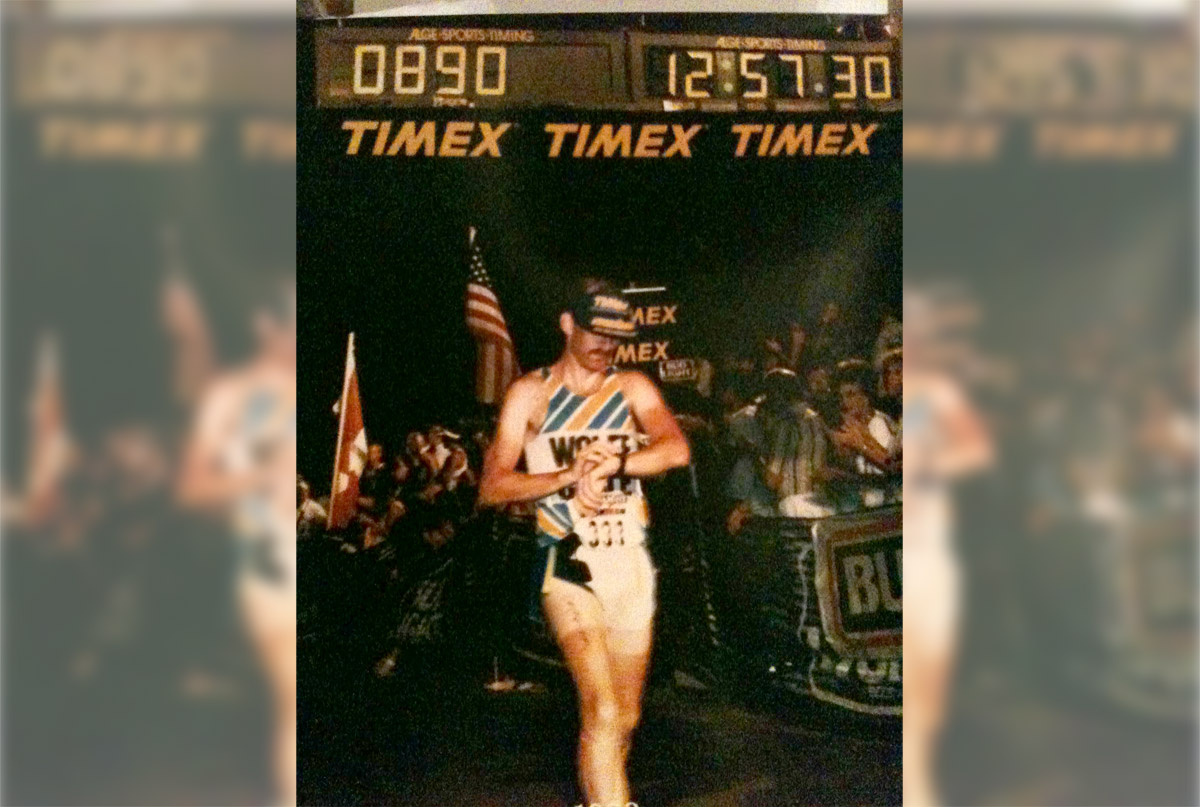 You do a lot of master’s racing on Zwift, which uses age-based categories. What do you like about those races, and how are they different than others?

Racing guys my own age – there are some really strong 60-year-olds, it’s crazy! When I get 3rd or 2nd or I win a race, it’s an earned thing that I’m doing. I have earned that win. It’s more competitive for me.

I have to just lower my heart rate and lower the watts. I can’t sustain them too high. Every race in Zwift, you better be ready, because we are putting out a massive amount of watts at the start, and then you settle in. My goal for those races is to get a good warmup, go as hard as I can, and then I settle in. If I stay in the peloton, I can draft. Drafting is really good in Zwift. The guys at the front can be doing 4 w/kg, but I can sit in and do 3.1 or 3.2, and they just pull me along – we call it the “blob.” I’ll sit in the blob as long as I can.

As the race goes on and there are people getting shot off the back, you really need to stay in the top 20 and watch what’s happening. When there’s a break in the peloton, if you’re not careful, you get separated. If you get more than a few seconds behind, you’re done. That’s where the PowerUps come in. It has happened where I’m not watching what’s happening up front, and then all of sudden there’s a break. As soon as that happens, I hit my PowerUp, and I go as hard as I can to get to that first group. Then I sit back in, lower my heart rate, and just continue racing. Three miles before the finish, it starts to wind up again. Everybody is going hard, and you’ve just got to find a wheel. Hold on, and then do your best sprint at the finish.

If you could invent a Zwift PowerUp, what would it be?

A PowerUp where I could really sprint to the finish, give me a 10-second blast where I’m putting out anywhere from 3.2 to 3.5 w/kg, and it would give me a 4 w/kg blast. That would be interesting.

But it would be a PowerUp that you earned, because I enjoy earning jerseys and earning bikes. Maybe they would give you a goal that you have to stay at 3.5 w/kg for a minute, and if you did that, you would get a special PowerUp. Or if you stay in the top 10, or if you would put your nose in the wind and go to the front for more than a minute or two, you would earn a PowerUp.

I like Richmond, because it has these three climbs. It’s really steep and hard, but once you get to the top (of the second climb) you can catch your breath because there’s a downhill. But then at the finish there’s an uphill, so if you’ve got anything left, you can pick off people really well. 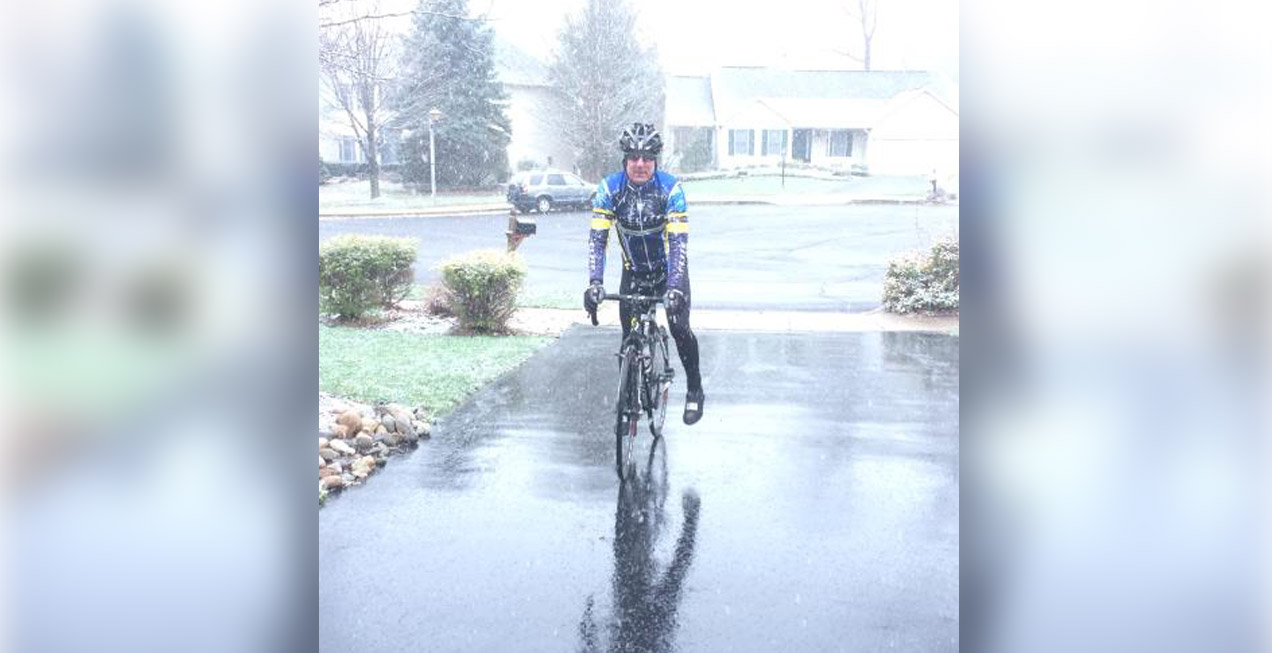 What would you say to people who might be unsure about racing, or who think they can’t compete?

Everybody can compete, because there is A, B, C, and D groups. For all categories, there’s always a race, and there’s always a competitor in your category. Whether it’s a 25-year-old just starting out or a seasoned 50-year-old, you’re going to find somebody you’re competitive with.

I have found for me that the more I trained, the better I got. The more I ride on Zwift, the better I get. That’s all it is. You’ve just got to keep at it and never give up, and you’re going to get better – there’s no doubt in my mind. Zwift records all your races and all your rides, so I can go to the beginning and look at my watts. I was 5 years younger, and I’m putting out more watts now than I was then. I’ve gotten conditioned and gotten stronger on Zwift just because I put time into it.

I really just have been thrilled with Zwift, as far as helping me out with my physical fitness. I go to my doctor… and he just says, “Whatever you’re doing, keep doing it.”… I don’t gain weight. My blood pressure went down. My triglycerides went down. My cholesterol was always higher and that dropped down below 100, because I was now working out every other day or every third day. You know, you can’t take a week off when you get up there in age, because you lose fitness so fast. It’s a lifestyle.

Welcome to the National Running Show over 2 years ago