As a mother and breast cancer survivor, Tina Boine-Frankenheim knows the stress her body can endure. She fell ill, grew weak, and underwent treatments and surgeries that sometimes made her feel even worse.

She fought back and won that battle with cancer.

Mentally, Boine-Franknheim could see her strength. But it took her a while to recognize her own body after all it had been through. It wasn’t until she got on a bike that she got to know and appreciate it all over again.

Fifteen years ago, Boine-Frankenheim’s favorite sport was boxing. She trained three or four times per week and competed as a welterweight. When she became pregnant with her first son, she decided to take a break from the sport and come back to it after he was born.

“But priorities had changed then, and I didn’t train as much as before and didn’t do competitions anymore,” she says.

The easiest way to stay active was to run, so she took up running in the summer of 2012.

Then, in 2013, she was diagnosed with breast cancer. Her whole life changed, including her body. She lost her hair during chemotherapy and gained weight because of the hormonal changes. She felt nauseous, tired, weak, and in pain. Double mastectomy surgery altered her shape.

“After the removal of both breasts, I waited one year before I asked the doctors to reconstruct the breasts with implants,” says Boine-Frankenheim. “During this time I avoided looking at myself in the mirror.”

She couldn’t see herself in her reflection – at least, not the athlete she had once been.

She didn’t feel like herself either, even after it was all over. She tried returning to running, but her body no longer tolerated it. Her feet, hips, and back all hurt when she ran. Boxing also wasn’t an option.

“I had the feeling that my body wasn’t good for anything,” she says. “Before I felt strong. . . . Now I felt like it was only good for causing problems. For feeling painful and sick. The visual changes from the surgeries and weight gain didn’t make me feel any better.”

Boine-Frankenheim tried indoor cycling and – finally – here was an activity that didn’t hurt. In January 2016, her brother introduced her to Zwift and helped her get all the right equipment to get started.

“I liked it from the first moment,” she says. “Even though I saw how slow and weak I was compared to all the other riders, this was more motivating than frustrating.”

Later that year, she decided to enter the Zwift Academy training program. Her FTP (functional threshold power) was around 115 when she started, and by the time she finished it rose to around 150. She was making progress. She was making herself into something new.

“I could feel how [the workouts] helped me to get fitter and stronger,” she says. “And it fit so well into my tight work and family schedule!” 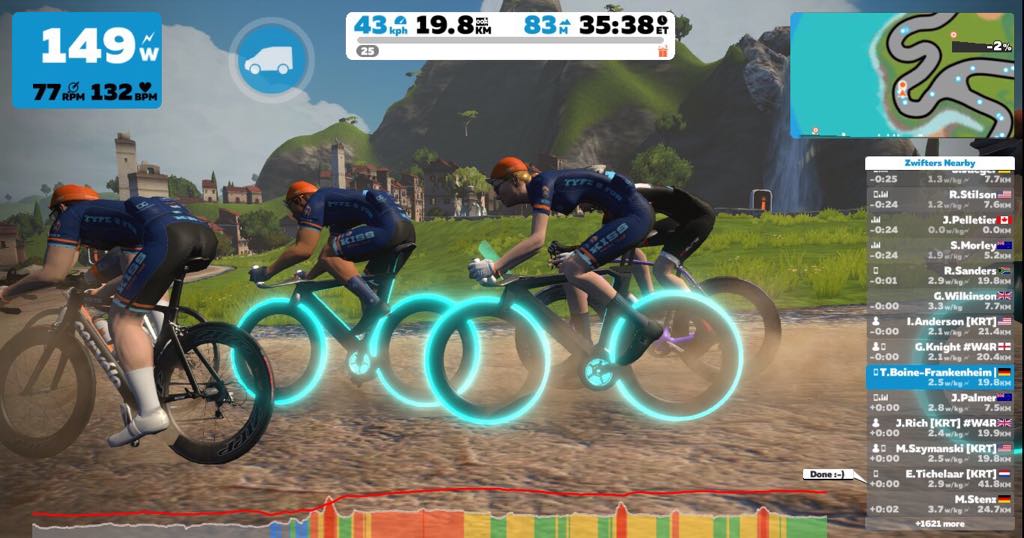 The community encouraged her and helped motivate her to keep going. Boine-Frankenheim is drawn to the social aspect of cycling. When she was asked to become part of KISS Racing Team (KRT) on Zwift, she agreed “without hesitation.” Since then, she’s become a regular Zwift racer and group rider.

“We’re such an international team, sharing so many things, motivating each other, helping others with knowledge and racing together,” she says. “This really made the Zwift experience even more enjoyable. I think I wouldn’t have done so many races without being part of KRT.”

With her growing confidence, Boine-Frankenheim decided to start cycling outside. She first rode alone at her own pace. Then she found out about local social group rides and started joining them regularly. In 2018 she joined a local cycling club in Dusseldorf, Germany, and in 2019 she became a management board member.

“I do quite a lot of outside riding now, several IRL (in real life) races and regular club rides,” says Boine-Frankenheim. 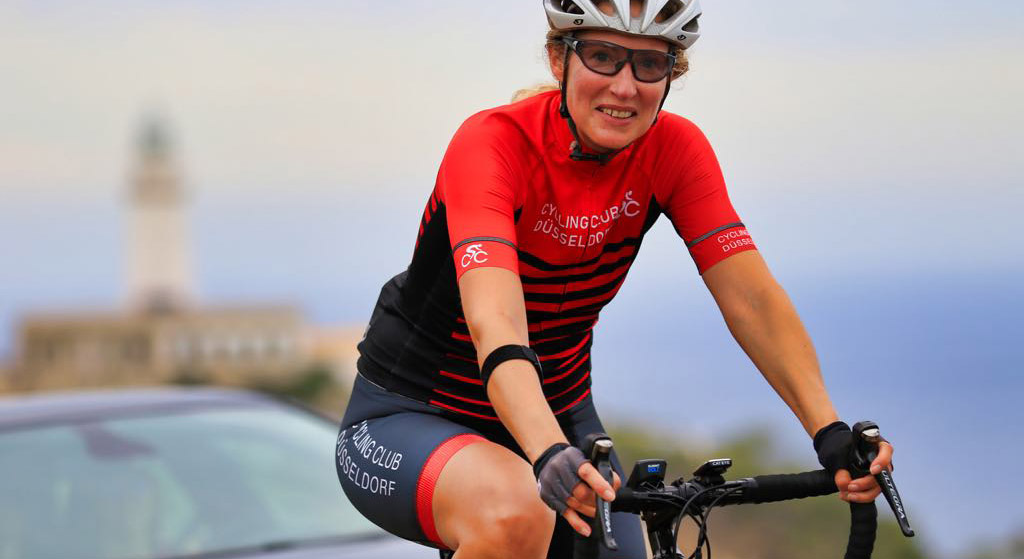 Cycling has helped Boine-Frankenheim come back to a more positive view of her body and what it can do. She’s gained a new respect for it.

“This maltreated body is able to be strong, to endure. It‘s still functioning!” she says. “And of course it simply helped me to get in shape, not like I was 12 years ago, but in a way I can accept.”

For others who feel discouraged about their own body, Boine-Frankenheim suggests trying things that are outside their comfort zone. Otherwise, they may never know what they’re capable of doing.

Listen to what your body tells you, she advises, and if you have medical concerns, find a doctor who is familiar with sports and works with athletes.

"Find a sport you can do with others and alone," she says. “You get the benefit of the social aspects but you can also try out things on your own, without pressure.”

The mental and emotional benefits are clear for Boine-Frankenheim – something that her family has noticed. Her first son is now 12 years old and watched as his mother turned her challenges into victories. Her second son is 7.

“Cycling calms me down,” she says. “I can put all those negative thoughts into the efforts and feel more relaxed and happy afterwards. When I am in a really bad mood, my kids often say “‘Mum, please go cycling!’”

Zwift How-to: Giving Ride Ons in game and out over 2 years ago