It’s been a big part of her life since she got her first bike at 9 years old. At first, she mainly stuck to touring and commuting. Then she started road racing about seven years ago, followed by a foray into time trialing. She had a real knack for it, too, earning the title of 2018 Australian National Time Trial Champion in her master’s age group (55-59).

MacRae met her husband, Don, and many of her friends through the Hawthorn Cycling Club in Melbourne. She and her son started bonding through biking together.

When two accidents threatened to take cycling out of MacRae’s life forever, she was devastated.

Until she found Zwift.

In 2015, a touch of wheels on a training ride sent MacRae over the handlebars. She lost three teeth, broke her nose and jaw, and broke a couple of bones in her neck. It took a long time and multiple surgeries for her to recover, but she eventually got back on the bike.

The final straw, though, was another serious accident in July of 2019.

“I actually hit a kangaroo, which is not very common in Australia,” she says. “Certainly not within 10 kilometers of a central business district.”

She flew over the handlebars and hit her face once again. She fractured her neck vertebrae again, broke her nose again, and suffered multiple other facial injuries that required surgery.

Lying in the hospital bed, she saw how scared her two children were to see her so hurt. She didn’t want to put her family through this a third time. MacRae also has a mild case of multiple sclerosis, and doctors told her another serious physical trauma could trigger an episode – or even paralyze her.

“I decided then that I wouldn’t be able to get back on my bike for outdoor riding, and that totally broke my heart,” she says, “because cycling, especially for the last 5 or 6 years, has been my life.”

Back on the Bike

MacRae had heard others in her club talking about Zwift, but she had never tried it before. Maybe this was a way she could stay on the bike indoors and actually enjoy it?

“I absolutely could not believe how close to real-life racing it is,” she says. “I find it just as exciting and just as good, and it comes without all the worry of accidents.”

She really enjoyed racing, and team Cryo-Gen noticed. Member and recruiter David Clarkson commented on her Strava ride one day asking if she wanted to join the team. She says she was honored to accept, but she didn’t really know if she would fit in as an Australian on a European-based team. Clarkson assured her that the team has members from all different time zones, with all different abilities and interests.

“We organise several weekly team Meetup rides and runs,” he says, “so there’s something for everyone and every ability to enhance their Zwift experience with no added pressure of riding for a team.”

In several Facebook and Messenger groups, MacRae and her teammates chat about their rides, their lives, and upcoming races. It reminds her of the camaraderie in her cycling club, which she started to miss when she stopped riding outside.

MacRae expected riding indoors would give her the physical benefits she missed from cycling. She says she was surprised that it could fill the social void, too.

“Instead of people that I see, they’re people that I just know online, but it’s actually a much deeper and richer relationship with those people than I was expecting,” MacRae says. “I thought if all you can do is text to each other, how are you going to get to know each other? But you do.”

MacRae’s 13-year-old son, Alexander, stopped riding his bike after his mother’s second crash. But he saw how much fun she was having on her bike in the garage, and he started to get curious. When he asked if he could try Zwift, MacRae was thrilled! He became part of Cryo-Gen, too.

For Alexander’s first ride, MacRae created a Meetup with the “keep together” feature turned on. That way, mother and son could ride together no matter how fast or slow they were – something they couldn’t have done outdoors.

“I was nearly crying,” MacRae recalls. “We were riding together again, and I didn’t think we’d be able to do that anymore.” 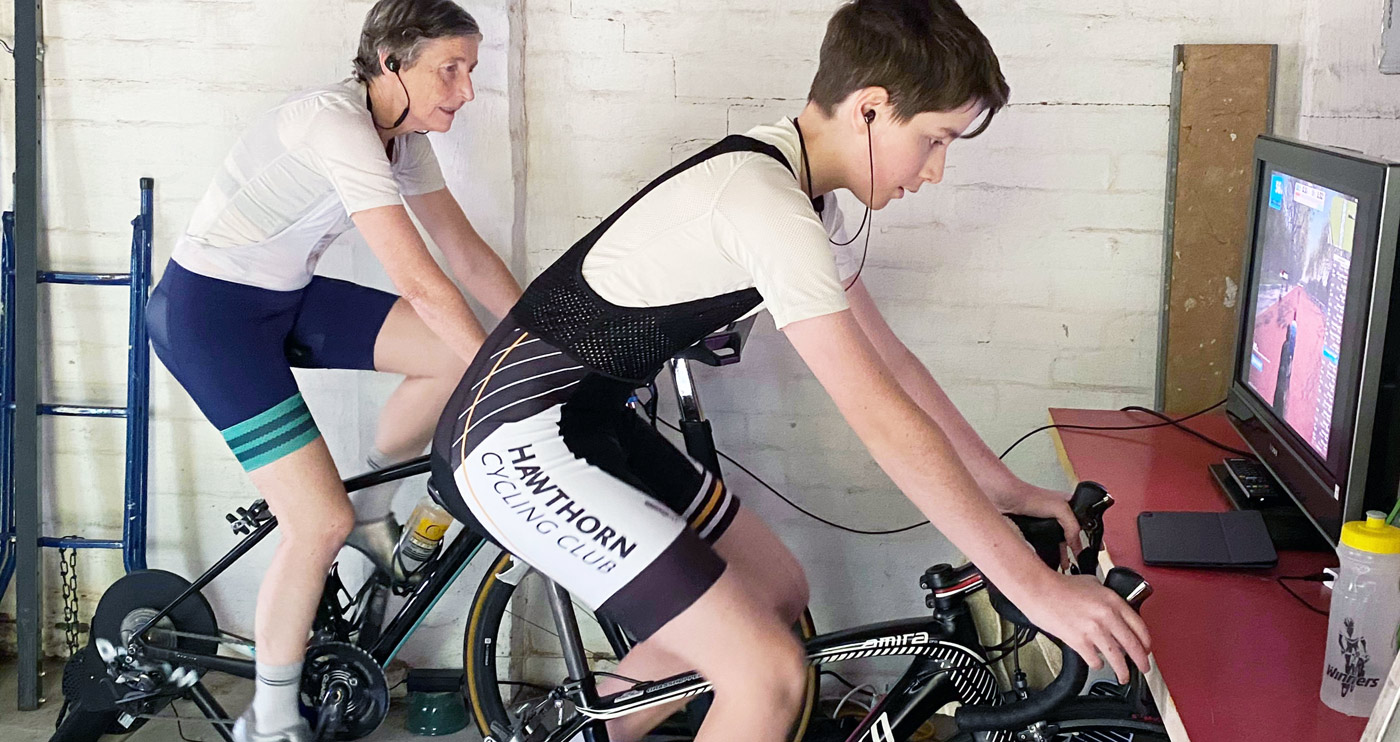 Their two bikes sit side-by-side in the garage. MacRae watches a big screen, while Alexander uses a tablet to run Zwift. Sometimes they sign up to do easy-paced group rides. Other times, they will do meetups or just free ride together.

“We love it,” she says. “It’s like riding outside together, except that we can talk more.”

Alexander has limited interaction with team Cryo-Gen for now. He doesn’t use Facebook, so any communication on social media goes through his mother. Still, the members have embraced him as one of their own. Team manager Tam Burns even sent him a special T-shirt, handmade by his wife, for being the 500th member to join.

“We like to make quite a welcome for new members, but this was special,” Clarkson says, “not only for the benchmark 500 but who it was that took the honour.”

MacRae’s 16-year-old daughter, Hilary, hasn’t yet shown the same interest in cycling. If she wants to join Zwift, MacRae says she’d welcome that, but the two teenagers might have to take turns in the garage!

MacRae says she misses riding outside but is happy to have a way to enjoy it indoors. She hopes that others who have had to give up riding can join her on Zwift and keep their passion alive.

“It’s been truly life-changing,” says MacRae. “My life would be totally different without my riding. It’s just such an integral part of who I am.”

Keith Jardine: Losing Weight, Finding a Passion over 2 years ago