Every Saturday, the ZHR Weekend Group Ride sets off at the same pace. For some, it will be a recovery ride or a warm-up. For others, it will be a challenge just to keep up. But the goal is for all to know what to expect – from the speed of the ride to the friendly chatter.

Leader Robert Baldi says the goal of the ride is “to have an international social ride at a pace that is manageable for most. Expect lots of social interaction, whether it’s about cycling news, food, haikus, anything; you can always turn off the chat, of course!” 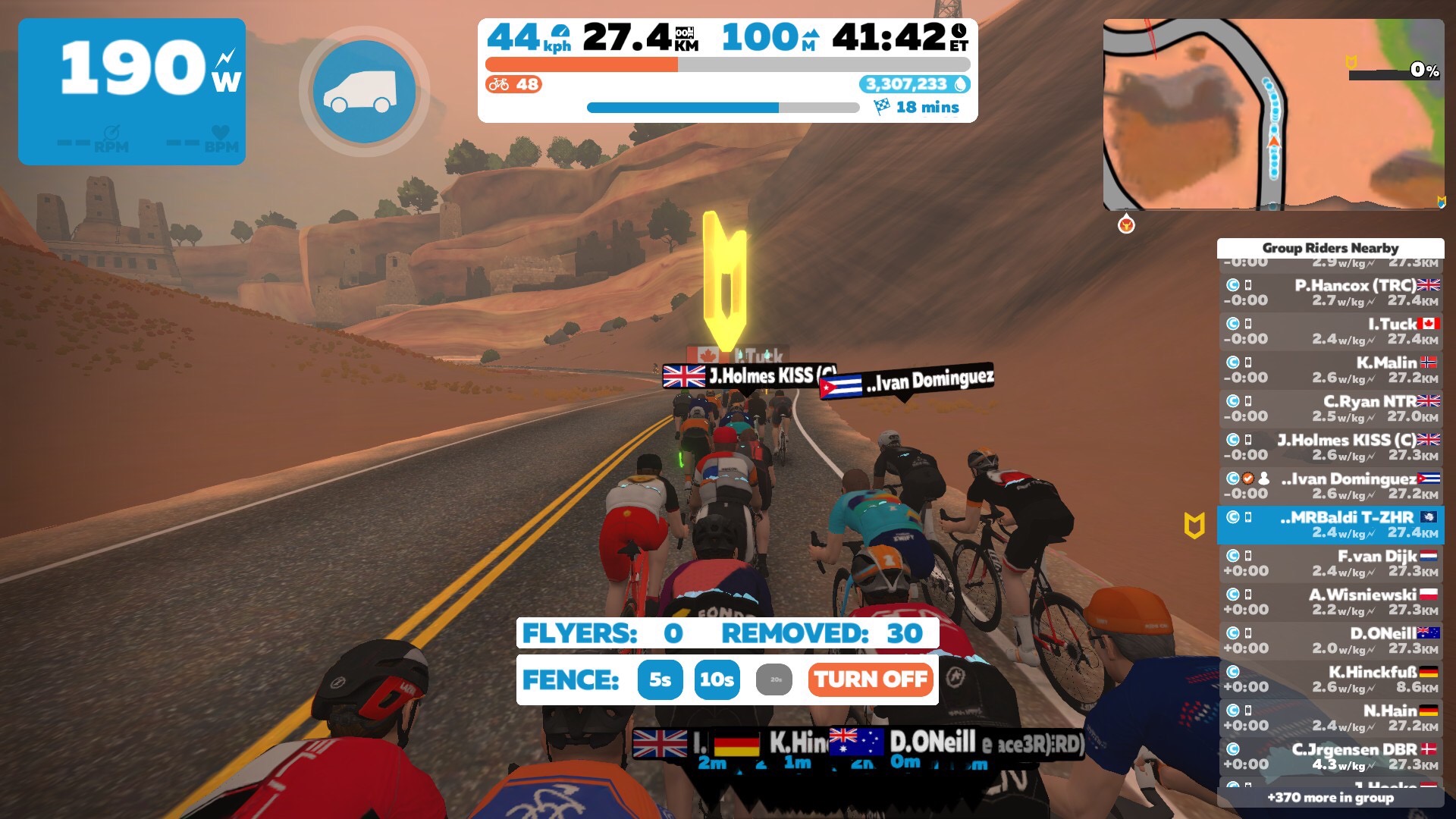 The ZHR Weekend Group Ride prides itself on maintaining a steady pace. It’s advertised both in watts and w/kg (watts per kilogram) to give riders as much information as possible. After an initial ramp-up from 2 w/kg to a steady 2.3-2.5, the leader doesn’t chase riders out in front and doesn’t change power with the terrain.

“That makes us predictable and dependable: no surprises, no having to surge ahead just in case the leader also surges and drops you,” Robert says.

The advertised pace is not an average – it’s the leader’s target for the whole ride, once the group is up to speed. After all, in a ride that targets an average pace, a leader could do all-out sprints and surges and still hit the average by the end.

For those who still might have trouble keeping up, a few regular volunteers serve as sweepers to help anyone who gets dropped.

The Weekend Group Ride has grown in popularity over the years, and now 200-500 people join each week. When asked what he wants other Zwifters to know about this ride, Robert had this to say:

“Everyone is welcome on this ride; I would like to see more female riders joining us, as it always feels a better ride for their presence. And don’t be shy, do contribute to the social chat: you can raise any subject, so long as it’s not offensive, insulting, aggressive, etc. Oh, and never ever mention any sports spoilers: different time zones means people will watch, for example, Paris-Roubaix after the ride has finished, so it’s always best to ask if it’s ok to talk about it or risk incurring another rider’s wrath!”

ZHR stands for Zwift Handicap Race. In 2015, Robert began to run a series of time trial races where slower riders got a head start over faster ones. This later expanded to different types of “handicap” events meant to help Zwift races become accessible to everyone, regardless of ability.

Soon ZHR wasn’t just a race, but also a club and social group.

How did the Weekend Group Ride Start? Here’s how Robert explains it:

“I started leading it sometime in 2016 to fill the vacuum that then existed on Saturday evenings (for Europe). I chose the time so that it would suit almost every time zone in the world, although we lose most of the riders from Down Under when we change our clocks forwards in our Summer while they take theirs back for their Winter.”

Robert Baldi still leads the ZHR Weekend Group Ride most of the time. When he’s unable, “there’s almost always been someone to step up to lead in my absence, even at very short notice, and I am always grateful for their help.”

The 49-year-old cyclist has been riding bikes since before he went to school. He first heard about Zwift through Jens Voigt on Twitter.

“I thought it was a brilliant idea to not only relieve the monotony of indoor training but also to engage with other riders around the world,” Robert says. “I had to wait until they released the Mac version, however, so I was a relatively late sign-up for the Beta on Jarvis Island.”

For more information about ZHR and the Weekend Group Ride, check out the ZHR Zwift Club Facebook group.