Turn your midweek slump around with the Aussie Hump Day Ride!

At AHDR, you can expect friendly chatter and a steady pace held by an experienced leader. Near the end, you’re free to choose whether to keep things calm or spice them up.

“Come along and give us a try,” says leader Tim Searle. “It’s fun for all, and you never know who you’ll see there!”

The Aussie Hump Day Ride is a social group created especially for Australians but welcoming to all. It gets a steady number of 300-400 riders in the lower hemisphere winter and 200-300 in summer, proving popular year-round.

For the first two-thirds of the event, the ride aims to stay in the middle of its 2.3-2.8 watts per kilogram pace range. Most participants should be within that range if they stay within the bunch. As always, it’s a lot harder if you lose the draft. An experienced team of “Keepers” (sweepers) helps people return to the group if they’re dropped.

In the last third, people can pick their own ending to the ride.

“We try to have an event that has something for as many people as possible, with a “Main Ride” with a social aspect that involves chat, competitions, and giveaways, followed by an optional race segment called the ‘After Party’ with full results and honor board, etc,” Tim says. “For those not racing the After Party we have the mid-level ‘PACMAN’ (chase lap with a pace that gradually ramps up), and also a cruise group that continues riding at an easy pace until the end of the event.”

The ride was created by Tim Searle, who had this to say about its history:

“The Aussie Hump Day Ride started in April 2016, with the aim of being a social ride that as many Australians as possible could ride in together for an hour or so. Wednesday seemed a good day being the middle (hump) of the week. Our first ride had 28 attendees. Within 3 months we had 200 people turning up every week, and from all over the world. Giant Bicycles came on board and we continued to grow the ride.”

Now, AHDR has expanded to include several other events, including the Americas Hump Day Ride and an AHDR Ladies Ride. Regular group members have become friends and sometimes meet up to ride outdoors together! 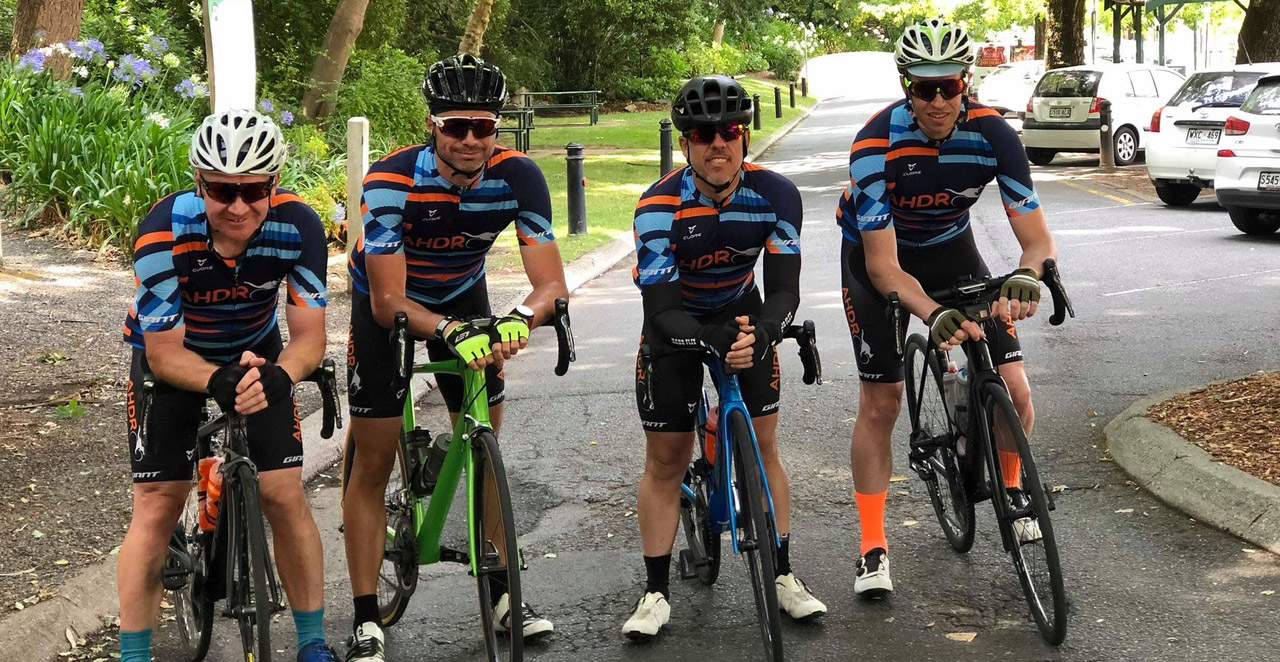 Leader Tim Searle (second from right) with other AHDR riders

Tim Searle still leads the Aussie Hump Day Ride, backed up by a team of “lieutenants” who ensure things go as smoothly as possible for all participants. Tim, who is 49, holds the record for most kilometers logged on Zwift, at over 150,000 km! Much of that has been achieved leading AHDR events.

All information about the Aussie Hump Day Ride and the rest of the AHDR rides can be found at their Facebook group.