France's "Casse-Pattes" is a mostly-flat route, but watch out: it has a sting in the tail! Before the loop tilts upward you'll have a chance to ride through quaint cobbled villages and take in famous sites including Brittany's mysterious Carnac stones and Mont Saint-Michel. But save your legs, because the Petit KOM doesn't feel small at all when you're going full gas!

What follows is a detailed breakdown of the Casse-Pattes route from Adam Dawson, a die-hard Zwift racer who runs the Zwiftaholics Youtube channel. Go there to find him racing (and commentating on races), and follow his tips below to get your best result on race day!

Casse-Pattes translates to "broken legs" and that's how most racers feel as they crest the deciding punchy climb on this circuit. It's a cruel finish after a gentle meander through the scenic French countryside, taking in the map's fields, flowers, rivers, villages and vineyards. While it may be little compared to the monstrous digital twin of Mont Ventoux rising behind it, the Petit KOM and its steep ramps remain a mighty challenge, and with only a high-speed descent to follow, there is little chance for dropped riders to regain lost ground and contest the sprint through the marina. 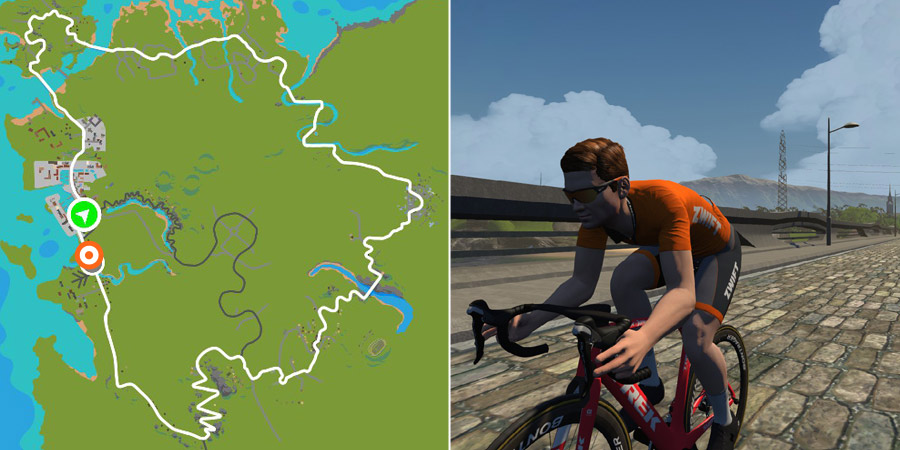 As with any race, a solid warmup is crucial before you head to the pens. Get that out of the way, then join the pens and wait for the clock to hit zero.

Our tour guide Adam gives us an orientation to the start of this route:

France's starting pens are nestled at the base of Ven-top, but for this course we'll be turning left and taking the flat roads. With no obvious pinch points until much later in the route, there is usually time to settle into a group. After the usual fast start, that is. 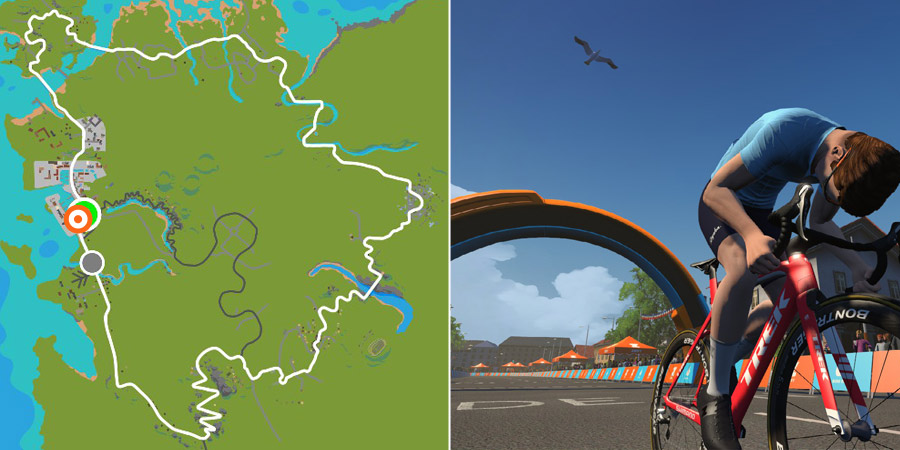 The scenic marina is a busy, colorful slice of French Riviera life. Cheering crowds line the street and boats of all shapes and sizes dot the waterfront. Soak it all in this time, because next time you're here you may be sprinting for the win!

Adam says, "Most races are starting to settle through this section, but you'll need to be on your game if intermediate points are on offer because they turn the beginning of the race into a 1.6km sprint that can quickly end the hopes of anyone not ready for a hot start."

After the race start and sprint segment, settle in for some of the flattest roads in all of Zwift. Keep an eye out for the grand cathedral and the lighthouse as the race cruises past farmhouses and magnificent stacked stone bridges. At around 7km in you'll spy the famous Mont Saint-Michel, a tidal island crowned with a 12th-century abbey and the starting point of the 2016 Tour de France! 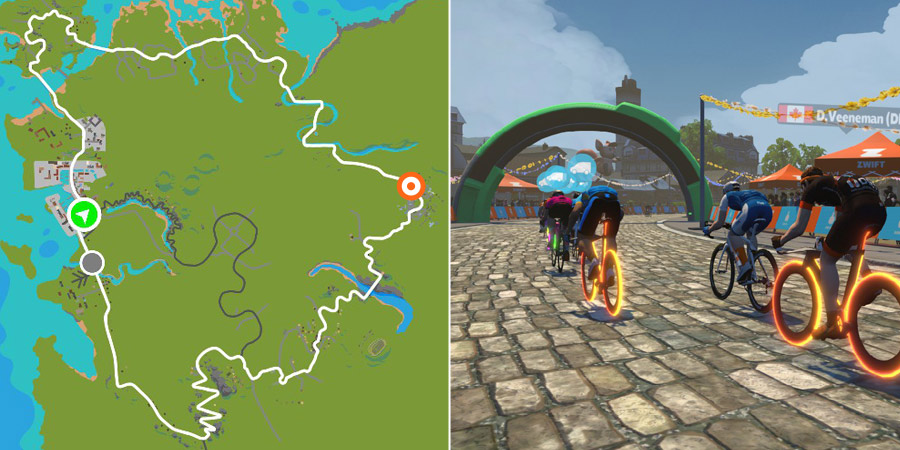 Just past the sunflowers we turn a sharp right and pass through an archway to start our second sprint segment. Cobbles to slow you down and a banner that stays out of sight until you're almost on top of it make this a challenging sprint if you're racing for points!

Adam offers helpful tips on the lead-in and an important reminder of what's just up the road:

Riders often start positioning and accelerating well before the race enters the village, so keep an eye out for the big field of sunflowers on your right and start winding up your effort. Don't go too deep, though, as the road quickly starts rising towards the Aqueduc KOM, which can motivate aggressive racers to push hard while the field is on the limit. 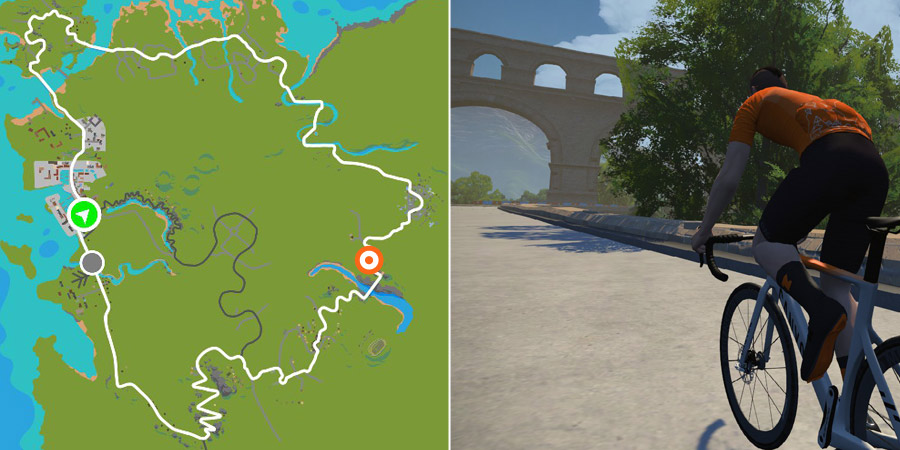 "It's short enough to sprint up and has a flat finish, but the Aqueduc KOM never fails to stretch out a field," explains Adam. "A lumpy lead-in gives racers several opportunities to increase the pace early, and good punchy climbers will deliver a withering turn of pace as soon as they hit the smooth concrete ramp up towards the banner. Keep the gas on over the crest to hold onto the wheels and save yourself a hard chase down the other side." 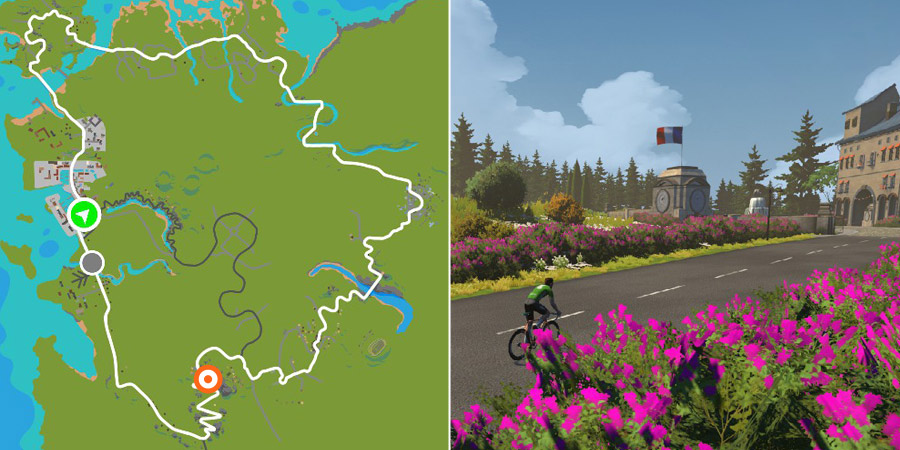 Soon enough you'll arrive at the most decisive feature of this course: the zig-zagging Petit KOM.

Adam says, "This is a climb that rewards those who can conserve their energy for a final burst of speed. A modest and very draftable 3% gradient for the first few hundred meters, followed by a long false flat to the first hairpin corner, provides savvy racers with an opportunity to stay in contact while keeping their powder dry. After working through a series of switchbacks up ramps peaking at 7%, you'll arrive at a towering chateau and pass through the gates. This is the point where racers who'll contest the finish go all in and bury themselves through the final two corners and onto the descent." 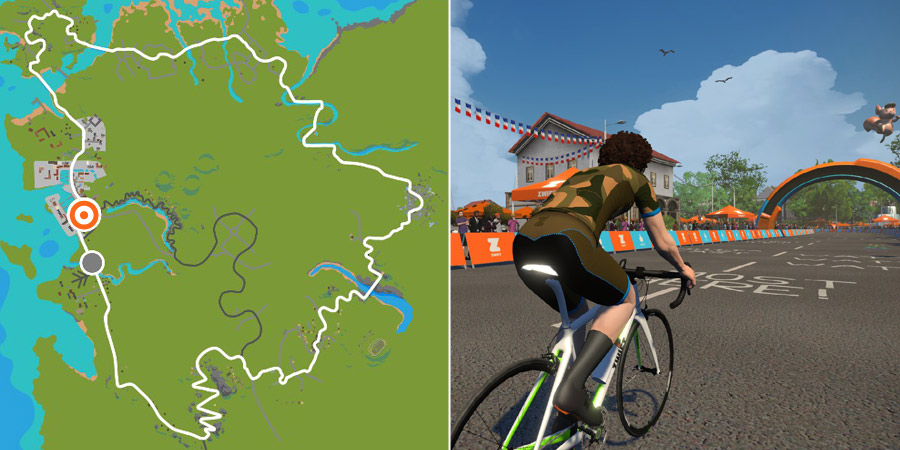 Push through the Petit KOM banner and you'll be quickly rewarded with a series of steep ramps to descend. While it's tempting to coast through this section, the road frequently flattens out, so super-tuck when you can but stay on the pedals when the gradient eases. There's nothing more heartbreaking than losing the group at this point!

Before you know it you'll be back on flat roads with only 1km to go. Hopefully you'll have a helpful powerup like an Aero Boost or Draft Boost for the final sprint. Adam delivers a few key tips for the final moments of your race:

This is a straight, flat, cagey section where everyone is looking at each other wondering who will show their cards first. The flags hanging over the road as you enter the village mark 400m to go so get ready to go all in, and don't wait to see the banner before launching your sprint as it comes into view with only 150m left to go!