Caroline Sale often likes to keep to herself – but not when it comes to Zwift Racing League.

She’s normally a shy person, but Sale raves about being part of a ZRL team. She loves racing and chatting with her fellow “pingus” in The Fairy Penguins.

“Zwift has allowed me to make new friends in a scenario that I feel comfortable with,” Sale says. “The team always has so much fun. We laugh together all the time, we race really hard, and everyone gives their best.”

Sale, who lives near Cambridge in the UK, joined Zwift in December 2020. After riding alone for a bit, she saw that the “Fat Lad at the Back” group had started a group ride. She knew them from Facebook, and though she doesn’t like groups in real life, she decided to try this one out.

“I felt very safe because no one knew who I was and I didn’t have to talk to anyone if I didn’t want to,” Sale says. “After about the third week, I started using Discord (voice chat software) and slowly began joining in with the conversations.”

On Zwift, unlike outdoor group rides, she feels no pressure to be outgoing and talk to people. There is no post-ride coffee-and-cake stop that she feels like she has to attend. She can chat when she wants and keep to herself when she wants, and that’s OK.

During one group ride, she met a German Zwifter named Ellie who was excited about Zwift racing. Intrigued, Sale asked privately to learn more. Ellie put her in touch with Clare Spencer, who organizes the women’s Zwift Racing League teams for The Herd. That’s how Sale ended up in The Fairy Penguins, one of The Herd’s two D category women’s teams. Even though they race against the other team, The Yellow Eyes, the two share a Facebook Messenger chat group and support each other there.

To learn more about The Herd, check out their website 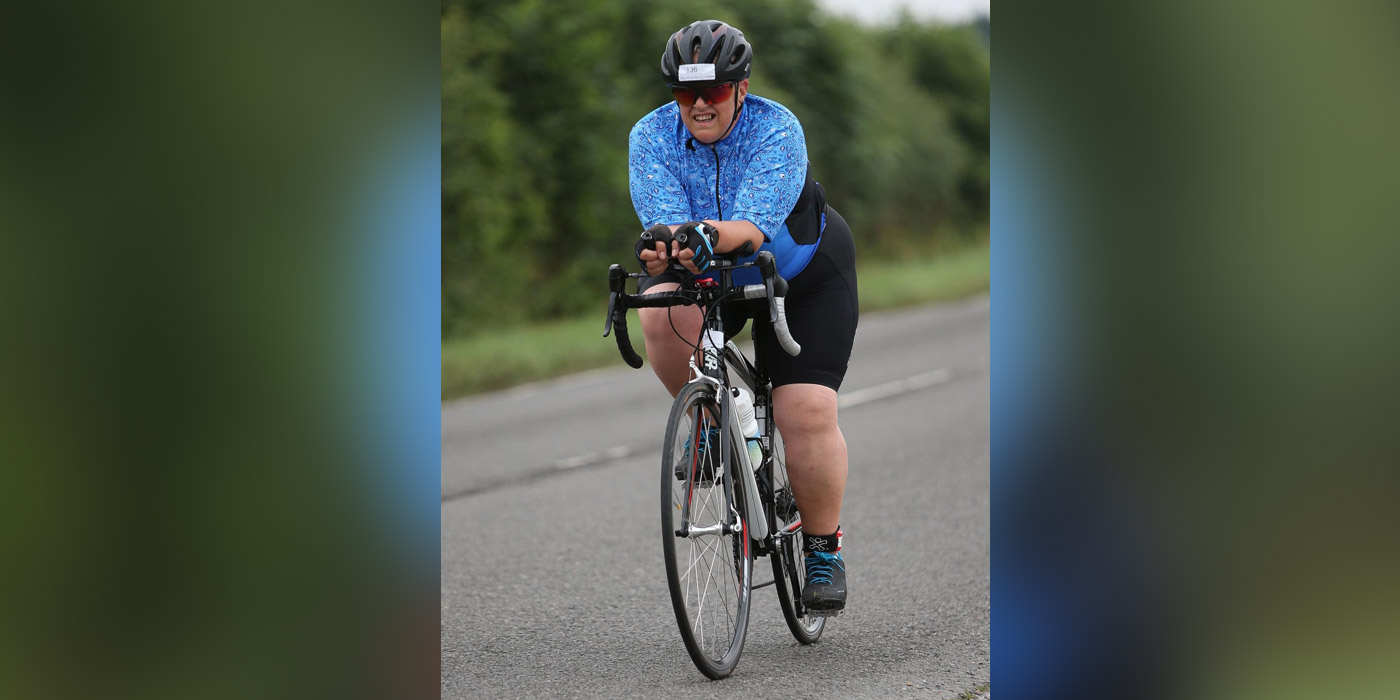 Caroline in an outdoor race

Sale took to racing like a penguin to water. She realized she liked it more than group riding or doing intervals in workouts.

“I’m really competitive, so it focuses me,” says Sale. “Racing is my way of making myself work hard. I’ve learned a lot about myself and what I can do.”

Zwift Racing League, hosted by Zwift and WTRL, is a team-based seasonal race series. This encourages riders to work together and allows different types of riders to take on different roles. In points races, participants can earn points for their team by going for a high finish placement, or they can target sprint and climb segments along the route. During team time trials, teams race against the clock to reach the finish together as fast as possible.

Sale found her role as a strong endurance rider who does best at steady efforts.

“Every single racer still worries that they’re not up to the job,” Sale says. “Remember that it’s fun and you’re not letting anyone down. The only person that might be let down is yourself, when you don’t give it a go!”

She says participating in ZRL has made her braver. She started exploring other ways to ride, entering different races individually and helping as a sweeper on a social ride. One season she did two races a day, joining up with some Australian women in the evenings.

ZRL even helped Sale build the confidence to race outdoors! On Zwift, she’s represented by her avatar, which Sale has named “BamBam.”

“I’m a large lady and struggle with my size,” she says. “Racing virtually means no one can see me.”

But it wasn’t long before she decided to enter an event and compete proudly as herself. Sale finished her first SwimBike race in June 2021 and plans on doing more.

Along the way, Sale has embraced being part of a team. She and her teammates motivate and encourage each other through all sorts of challenges.

One of Sale’s most memorable ZRL races was the last event of her first racing season. It was on the Surrey Hills route, which takes racers up Fox Hill, Leith Hill, Box Hill, and Keith Hill.

“It was really grueling – we were all so nervous and worried because it was so tough for a D Cat team,” Sale says. “We chatted and pushed ourselves – and did it. I was so chuffed personally as it was my toughest ride at that point. We then joined with the Yellow Eyes and some of us carried on up Box Hill again to get the (route) badge.”

Some ZRL teams are made up of Zwifters who live in the same country or region. Others span the entire globe. The Fairy Penguins and The Yellow Eyes together are made up of Europeans, North Americans, and a New Zealander. After racing together for a while, some of them met up for a long weekend in Cambridge. 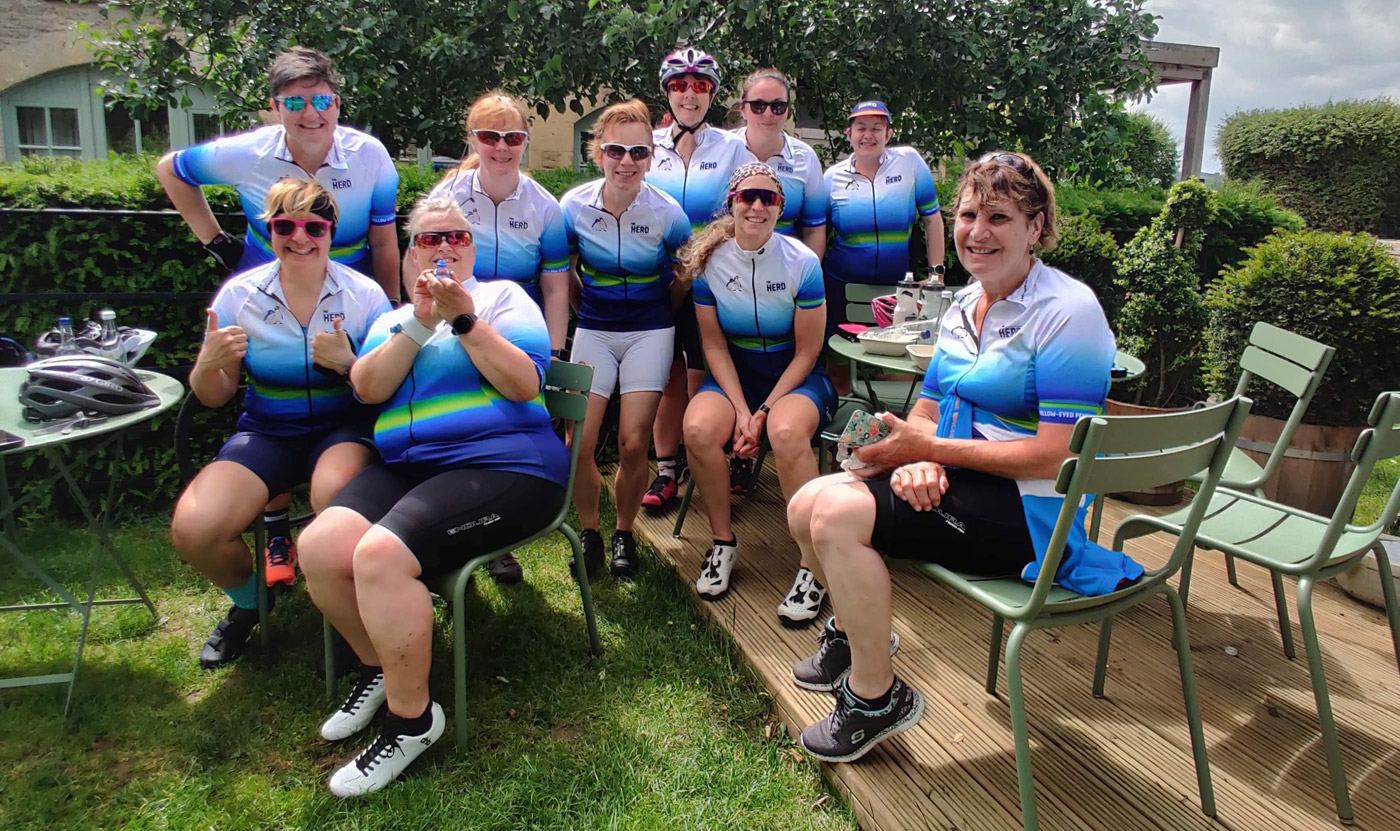 “We were all slightly anxious that we wouldn’t get on or be able to ride as a group,” says Sale. They didn’t need to worry, though. “We got on fabulously (so many funny memories made) and had an awesome weekend of cycling.”

In January 2022, Sale became captain of The Fairy Penguins. Captains help to organize their teams, set the roster for each race, give information about the races, and often serve as cheerleaders and motivators for their teammates.

“My advice for other team captains is to know your team,” Sale says. “Listen to them and learn their strengths and weaknesses. Always be positive. It’s about the whole team!”

This advice certainly worked for Sale. Last season, The Yellow Eyes won its league and The Fairy Penguins came third! Sale calls it “a superb achievement” for all those involved.

In January 2023, Sale intends to take on a 24-hour Zwift challenge to raise money for a friend who has been diagnosed with early onset dementia. When they heard about it, her teammates immediately offered to support her by taking shifts throughout the day. That way, she will always have someone with her – and Sale will welcome the company.

“This is why I love Zwift and ZRL,” Sale says. “I would never have met these wonderful people without it.”