When Nothing Stops You from Riding with The Jensie

“I got the email on a Friday at 5 p.m. saying that I’d won,” says the 38-year-old software company program manager. Indeed, Andy’s name had been picked in a Zwift contest, and his prize was a sweet and exclusive ride to take place on real pavement, and the very next day.

“I asked my wife: Can I do this tomorrow?” he says.

Specifically, Andy had won a chance to participate in the September 10 Shut Up Legs Charity Ride, which was to be hosted by Zwift ambassador and legendary, longtime pro rider Jens Voigt. Held in England’s New Forest National Park, the 80-kilometer ride is intimate—about 100 cyclists participate—and benefits multiple charities.

Then the challenges really began. Start with the fact that the Jenners have three kids under the age of ten, and but one automobile.

“I could go but I couldn’t have the car,” says Jenner. “Saturday. Swim lessons.”

The 80-kilometer ride immediately turned into a 160-kilometer ride, as Andy faced pedaling approximately 40 kilometers each way to the event’s start and finish in Lymington.

Did we mention the day’s heavy and persistent rainfall? Fortunately, Andy’s mind—and legs—were up for the challenge. He often Zwifts six days a week, and several of those efforts are group rides with Team ODZ.

“I had the base fitness,” he says. “What’s nice is knowing I ride enough on Zwift that I can go 100 miles outside without really thinking too hard about it.”

Even with some occasional shivering, Andy had a blast. He enjoyed coffee and a muffin before the ride began, and coffee and cake (and more cake) after the ride. In between beginning and end, of course, was a glorious, hilly, and wooded cruise. Participants rode in 10-person groups, and Jens drifted from one group to the next.

“He made an effort to speak with every person, in each group,” says Andy. “He’s a very nice bloke.” 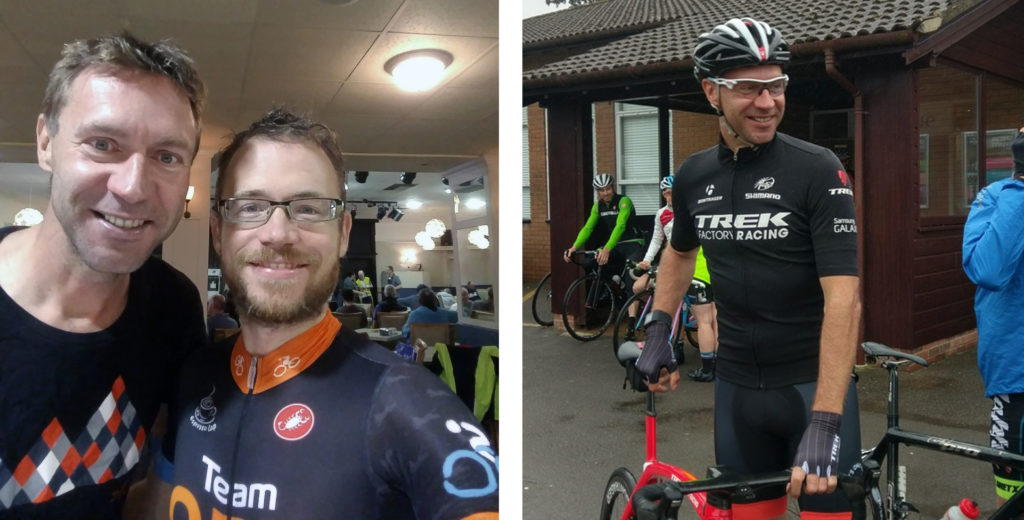 Following the ride, Andy and the other cyclists enjoyed Jens telling nearly two hours’ worth of war stories about a pro cycling career that had lasted nearly 20 years. The day then got even better: The rain stopped while Andy rode home. Even under a cloudy sky, the experience really was sunny, thanks in no small part to some dedicated Zwifting, and a rider who was every bit as game as his hard-man of a ride leader. Well, almost.

“Jens was the only guy in those conditions who would dare ride in short sleeves,” says Andy.