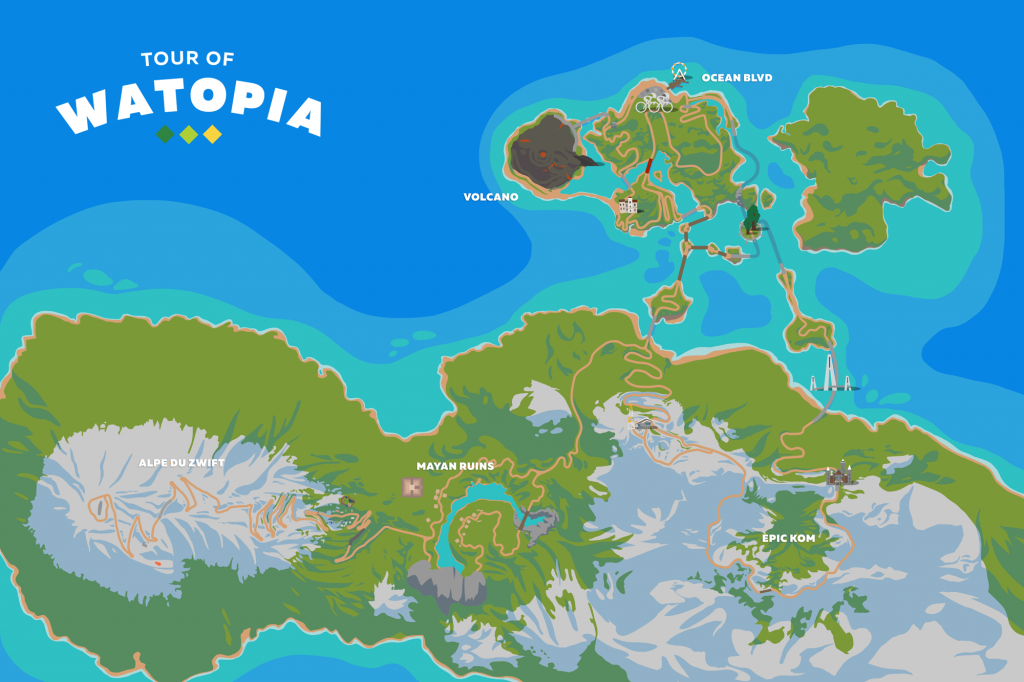 A Little History of Watopia:

The Tour of Watopia celebrates the most popular map in all of Zwift. In this land, Zwifters can accomplish feats impossible in real life like pedaling over an active volcano and under the sea through a transparent tunnel.  Although riding through a Mayan jungle and in the Alps in real-life is amazing, doing it from your home, day or night, when you have a limited amount of time is pretty awesome.

Watopia welcomed Zwifters to its roads on April 24, 2015. (Watopia was announced April 22, 2015.) Call it the big brother to Jarvis Island, Zwift’s first map that Watopia replaced. Jarvis was just 5km long, and located on a tiny island in the South Pacific.

When Jarvis launched on Oct. 28, 2014, virtual cycling was in its infancy. Zwift chose this remote location, to ensure that real-world Strava segments were not “polluted.” But some Strava members were confounded at first, when they saw riders like Ted King, posting IRL segments in Girona, Spain, followed by a segment located thousands of miles away just hours later.

Zwift was in beta at this point and early testers knocked out thousands of miles, making Jarvis one of the most popular Strava segments that year. These Zwifters also helped evolve the game, testing out early Power-ups. Most of these Power-Ups are still available. But some, like the one that made you un-draftable went away because when in a casual group ride it was no fun constantly having to punish your friends. RIP Breakaway Burrito.

Watopia’s Ocean Boulevard was the first expansion and our island continues to grow. Climbers got lucky on St. Patrick’s Day in 2016 with the arrival of the Epic KOM. The always active Volcano blew Zwifters away a year later. And events made it easy for Zwifters to join cyclists around the globe for a ride.

That’s not all. The gates of the Mayan Jungle opened in October, so Level 10+ Zwifters could explore an ancient civilization via gravel roads. Last month, Alpe du Zwift delivered a crash course on climbing: 3,399 ft (1,036 m) in just 7.5 miles (12.07 km).

Zwift has come a long way since 2014 and we couldn’t have done it without you and the rest of the Zwift community —  the best and most supportive cycling crew on the planet.

Celebrate the World of Watopia with us as we take a look at every stage of the Tour of Watopia.

Click on the image of the route to explore.

Click on the image of the route to explore.

Road to Ruins - Tour of Watopia over 3 years ago