London's Classique accurately recreates key portions of the Prudential RideLondon Classique, home of the most lucrative one-day race in women's cycling. Located in central London, the course takes riders past iconic sites including Trafalgar Square, Buckingham Palace, The Mall, Big Ben, and the Strand. But don't stop to snap photos: it's time to race!

What follows is a detailed look at key sections of this route from a racer's perspective. Experienced B racer Gregg Magnus has shared some pointers, so get ready to learn key strategies for achieving your best results when racing the Classique.

Gregg says, "The London Classique is about as close to a short circuit race course as they come. You begin with a rolling lead-in from the pen with one short punch to get you onto the circuit. Once you are on the circuit it’s quite flat except for the short climb 3km after the sprint banner. Often times it’s a stalemate except for the surge in the climb, but there may also be some attacks and opportunities to break away if that’s your style. Overall if you like to sprint this is a great course to just hide in the draft and let those big watts rip at the end." 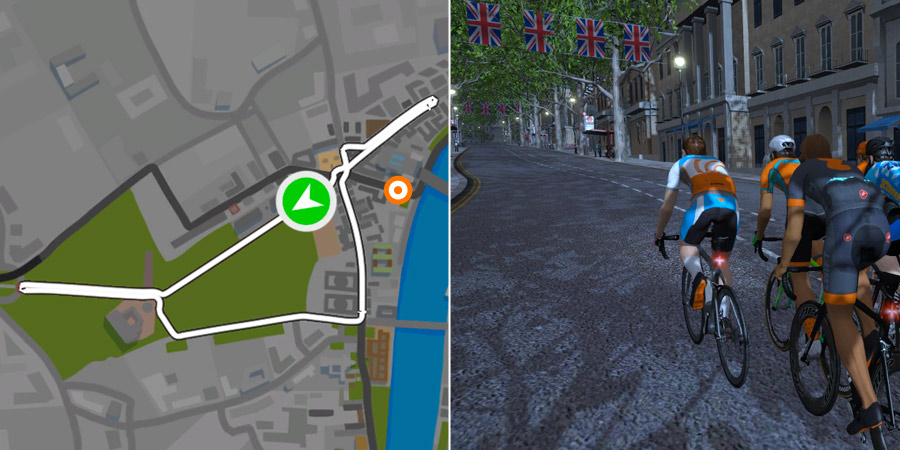 The lead-in to the Classique circuit consists of gentle rollers and a short punch up to Trafalgar Square. Since this is a flat course, it is best to arrive at the line nicely warmed up and expecting a fast start.

When the group makes a hard right away from the Thames be ready to punch it up Northumberland Avenue (400 meters, 4-5% grade) and maintain power over the crest until you are comfortable with your position in the pack. 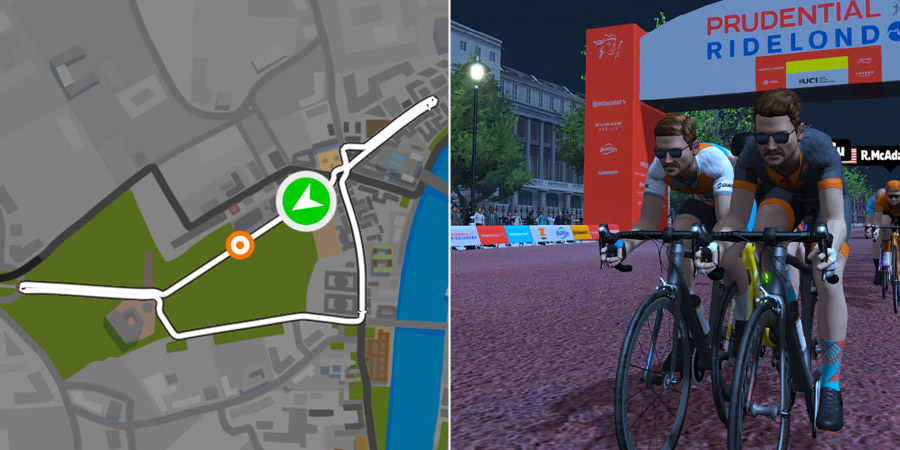 Most Zwift races do not award intermediate sprint points, but you will still find riders attacking through the Classique banner. If you aren't looking to attack, simply stay attentive and hold your position. Solo attacks rarely stick from this far out. 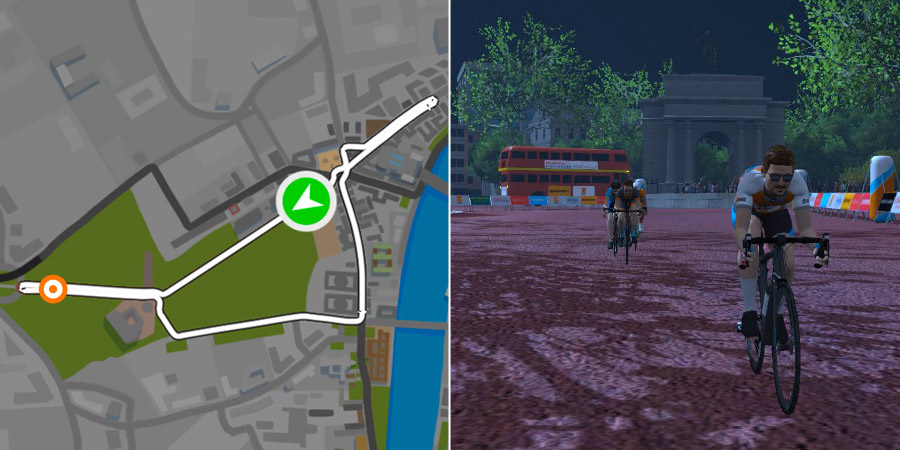 Once through the banner, you will make a slight right and hit a false flat on Constitution Hill. Typically no attacks happen here, but be sure to hold your position through the u-turn. After the u-turn the road changes from a slight uphill to slight downhill, so be careful to maintain position and not get dropped off the back as the group builds speed and quickly heads toward Buckingham Palace. 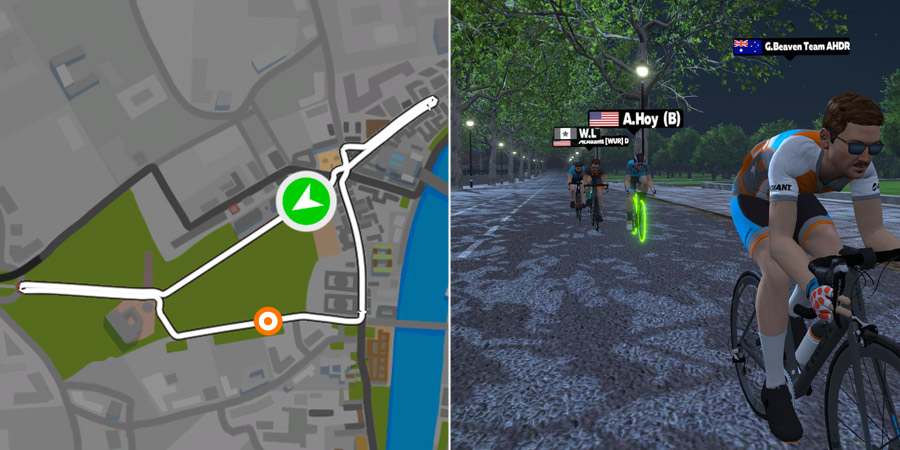 Just past Buckingham Palace, the red pavement ends and you turn left onto Birdcage Walk. Everyone knows the decisive Whitehall hill is coming quickly, but if you're feeling strong consider making an early surprise attack on this small rise. If you can put a few seconds into your competition here on the final lap then continue your effort up Whitehall you just may have what it takes to stay away for the finish. 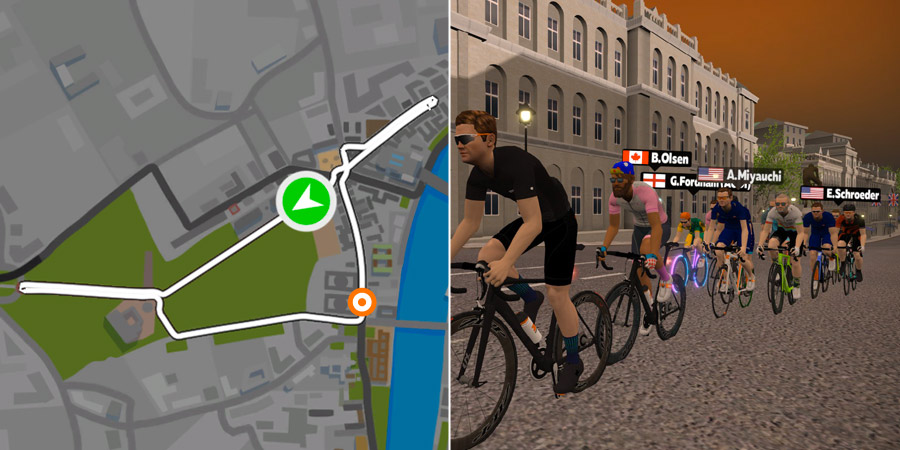 Gregg says, "... it’s critical you are paying attention and have the legs wound up each time going into this. It is not uncommon to see people hitting 8-10w/kg through here. It’s painful but over quickly, just dig in and hold on as the pace almost always settles just after the intersection at the top."

A feather power up really helps take the edge off this decisive stretch of tarmac. Not many Classique races are won here, but many are lost as riders get dropped from the hard-charging front pack. The first half of this segment is actually a small bump, and most riders will save their hard effort for the second half.

If you're already gassed just try to keep your speed up by holding a good wheel over the bump and up the main hill to Trafalgar Square. Feeling good? Attack on the bump and keep the power up all the way through the intersection. 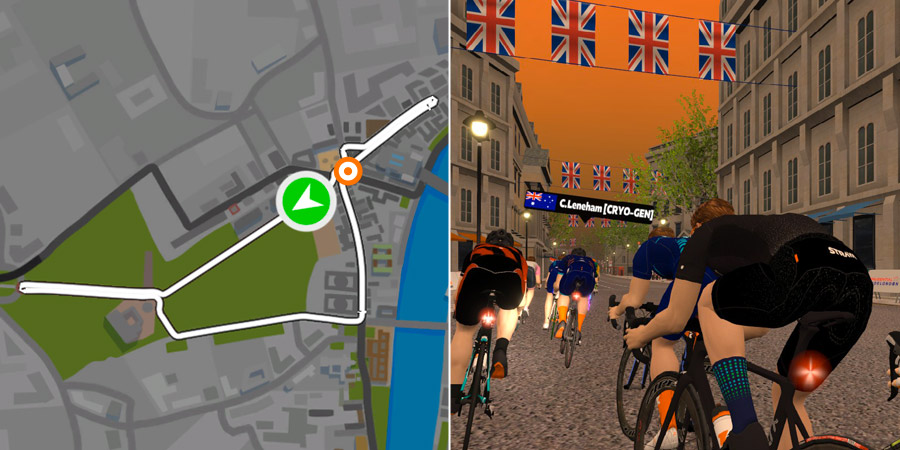 Gregg says, "This is also a fantastic place to attack if you held anything back during the climb. Most people are gassed, got something left? Hit the midrange power and see where you can go."

While this is an excellent place to attack if you've got the legs, you may also be looking for recovery at this point. If so, grab a wheel and use the draft smartly to stay with your group. You may even want to use a truck or aero powerup here to catch your breath. 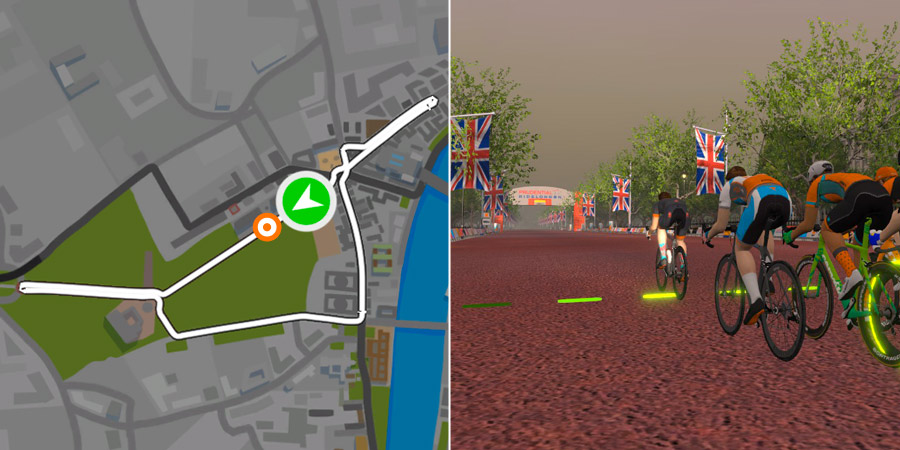 Gregg says, "The Classique sprint is slightly downhill however not quite as much as Watopia's. You can usually get away with opening up a bit early however be warned you can see the banner from a long way out, if you don’t hold back you might find yourself blown before you cross the line."

Due to its flat profile, Classique races almost always come down to a pack sprint. With its slight downhill grade, the final sprint is fast. Speeds often top 70km (43mph) so an aero helmet powerup gives a big advantage here.

Got a van powerup? It only helps when you're drafting, so stay on someone's wheel and ride that leadout train until you can power through at the last moment.

One final tip: as Gregg said, you don't want to start your sprint too early. But you also don't want to start it too late! The official sprint segment will be covered in just ~10 seconds, so be ready to ramp up your effort well before the sprint start line.

We hope you've enjoyed this Race Recon. The goal of this series is to explain the features that make each Zwift route uniquely challenging for racers. Previously we looked at Watopia's Hilly Route. Be sure to read that post for more tips!

Zwift How-to: What Does the Colored Screen in Front of a Zwifter mean? over 4 years ago