﻿We continue with Part 3 of our Zwift Women' s Week series. In their own words, these extraordinary athletes give us a glimpse of what this community is truly made of.

Leading up to the celebration of Zwift Women's Week, we sent an email out asking all of our female riders to tell us in 140 characters or less, "What does Zwift mean to you?" The answers flooded in. They were heartfelt, funny, brave, surprising and powerful. This week, as part of the festivities, we're sharing the stories and sentiments of the women of Zwift.

Be prepared to be inspired.

“In my case, postpartum depression felt like I wasn’t living up to society’s standards of the perfect mom,” says Elizabeth McLean, who lives outside of Calgary in Alberta, Canada, and today is a proud Zwifter and mother. “I felt like nothing I did was right. But I didn’t mention it to anybody.”

Then one day last summer, with their baby Benjamin having just turned two, Elizabeth’s bike nut of a husband suggested—in just the right way, when Elizabeth was enjoying a lighter moment—that she might be suffering from a prolonged form of postpartum depression.

“All of a sudden the heavens opened,” she says. “It clicked.”

While “it’s still of a bit of a battle every day,” says 37-year-old Elizabeth, “the riding helps me.”

Indeed, thinking that Zwift was just one more shade of her husband’s longtime cycling obsession, several months ago he finally convinced her to try it.

“Two weeks after the free trial ended, I said you need to sign me up,” she says. “I can’t not do this. I really enjoy it.”

Elizabeth now Zwifts several times weekly, and has her sights set on this coming June’s Ride Don’t Hide, a 50k event hosted by the Canadian Mental Health Association. Ride Don’t Hide is dedicated to raising awareness around (and funds for) mental health. Elizabeth is very proud of herself—and her son, whom she calls, “a silly, wonderful, compassionate little boy. I look at him and say to myself, you’re doing a good job.”

Ultimately Elizabeth wants to ride specifically to raise funds for those enduring postpartum depression. “It’s not taboo,” she says. “Speaking personally, I know that any kind of physical activity helps me—a lot.” 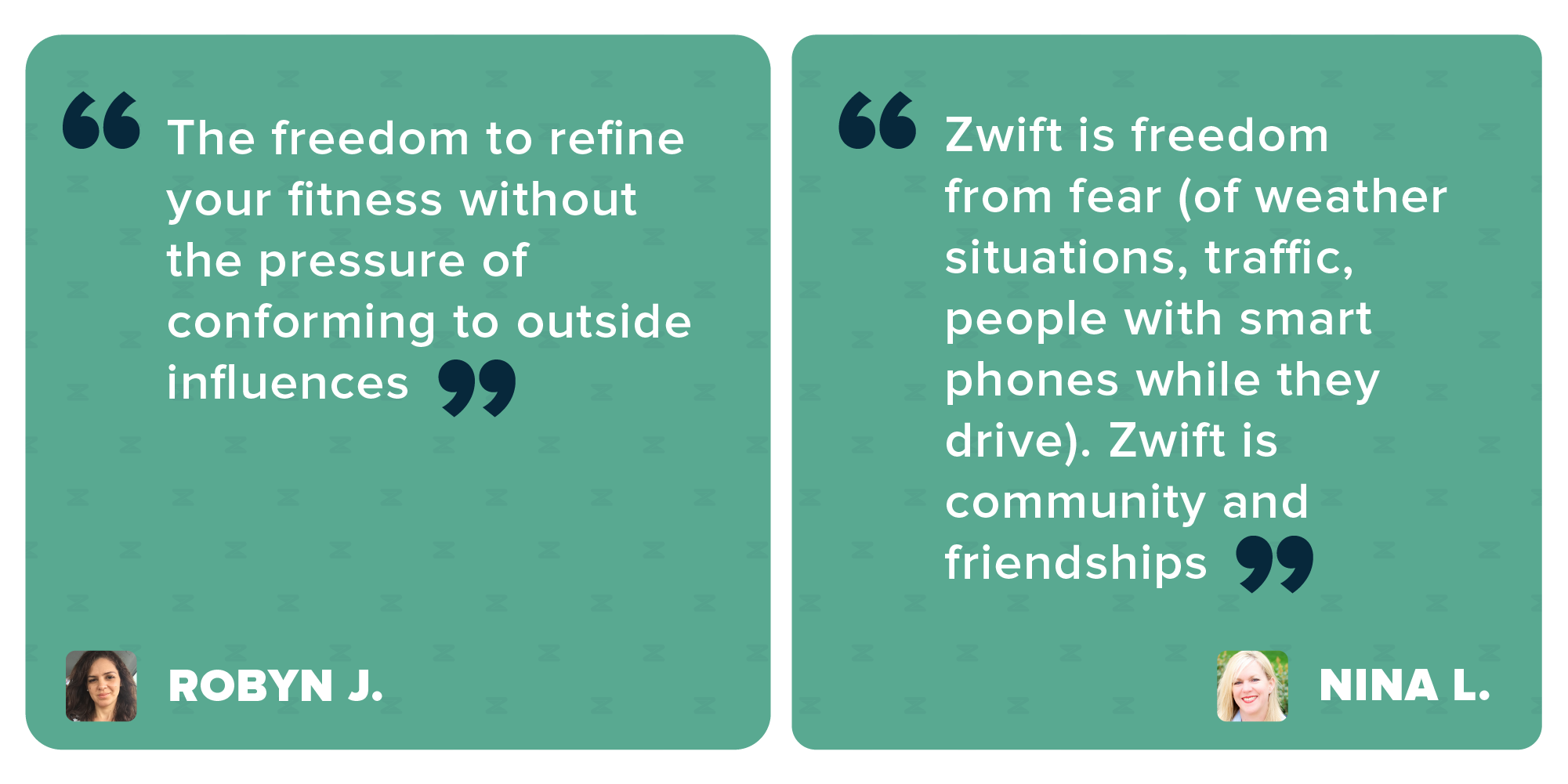 “I often plan on going easy,” 45-year-old Zwifter Madeleine Blom recently wrote to us, via email, about her riding style. “But it almost never turns out that way.”

Madeleine, who lives in Trollhättan, Sweden, is a psychologist, wife, and mother of three young daughters. But when it comes to cycling she’s also something of a Swedish wolverine. Since 2011, when running club friends invited her to participate in a triathlon for fun, Madeleine has gone from a hybrid bike to a road bike to a couple more upgraded road bikes.

She began to Zwift in late 2015—“I fell in love at once,” she writes. What Madeleine loves most, she says, is going full-tilt in friendly competition.

“There’s always some group to try to latch on to, or someone to challenge, or someone that challenges you,” she writes. “If not, there are always personal records to chase.”

With her goals endless and her motivation high during all four of her weekly Zwift sessions (a bucket, yet to be used, sits next to her bike in case she goes too hard), what else could Madeleine want for her Zwifting experience? More hardware.

Currently she and her Zwifting husband must choose who gets to ride which races and group rides. “Yes, another trainer,” she writes. “I guess that’s sort of a Zwift-related goal, too.” 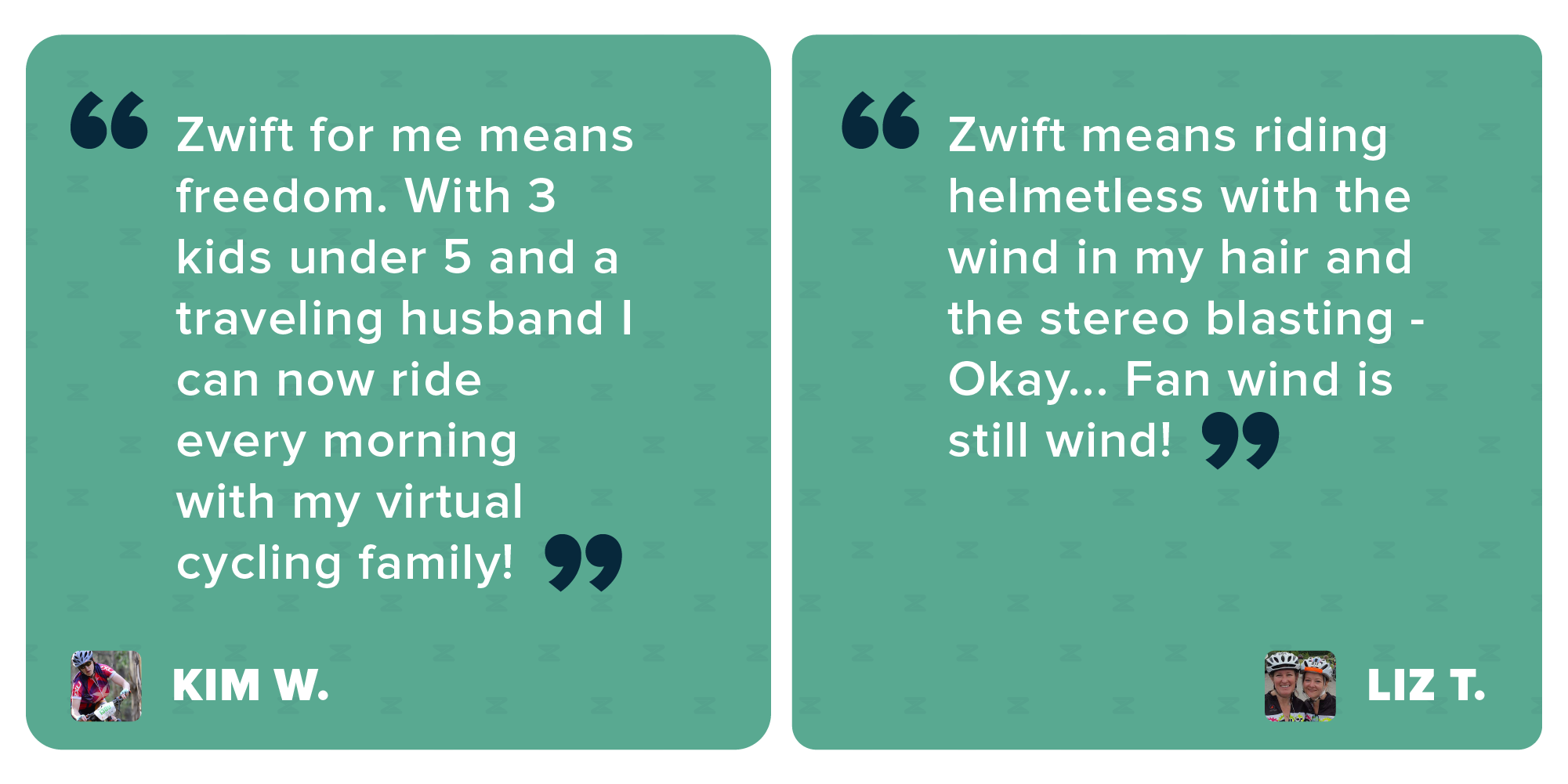 Zwift Women are Brave over 5 years ago