One day in October, Zwift announced that anyone who rode 112 miles that week would be entered to win a bike.

One 66-year-old woman hopped on her own bike and rode all 112 miles that day.

Marge Kaufmann watched a YouTube video by cycling tech guru Shane Miller explaining the Kona 112 Mission. Finishers had the chance to win a Specialized Shiv time trial bicycle. He said it didn’t need to be done in one day, but if anyone decides to do that, they should let him know.

“When I do stuff like this it’s better for me to do it right away,” she says, “because when I start thinking about it then I start planning, and then you know how plans go.”

Kaufmann’s ride may have been a spur-of-the-moment decision, but it took years of work for her to get to this point. She is no stranger to spending long hours in the saddle.

Kaufmann began riding a bike in 2012 as a way to lose weight and stay in shape. She lost 50 pounds in five months.

With that kind of result, she was determined to keep riding and do more of it. Kaufmann set a goal to complete a century ride – 100 miles – by the time she turned 60.

In rural Wisconsin, Kaufmann couldn’t find other people to join her on rides. She loved riding her bike, but dealing with agricultural machinery, trucks, and cars could make it stressful and she didn’t want to end up stranded far from help. For a while, she adapted by repeating short loops and scheduling her rides to avoid traffic. Winter still forced her inside.

Kaufmann’s husband, Bill, suggested in early 2015 that she go to a bike shop and upgrade from her hybrid to a true road bike.

“While at the store I saw this machine with a bike connected to it,” Kaufmann says. “They told me it just came out and it would change the way people would cycle indoors.”

She bought the Wahoo Kickr smart trainer and became a beta tester for Zwift.

For Kaufmann, Zwift was a gateway to a new world. She found the type of cycling community she never had before.

“There’s no bike clubs here,” Kaufmann says. “Zwift is great, because I get to talk to people and ride with people. Out in the real world, I don’t get to do that... I was isolated.”

She joined the World Social Riders group on their regular rides at a beginner-friendly pace. She credits Julynn Washington, an early community leader in Zwift, with helping her learn the ropes.

By the end of 2018, Kaufmann had completed several century rides, both outdoors and on Zwift. She offers encouragement to others attempting a 100-mile ride. 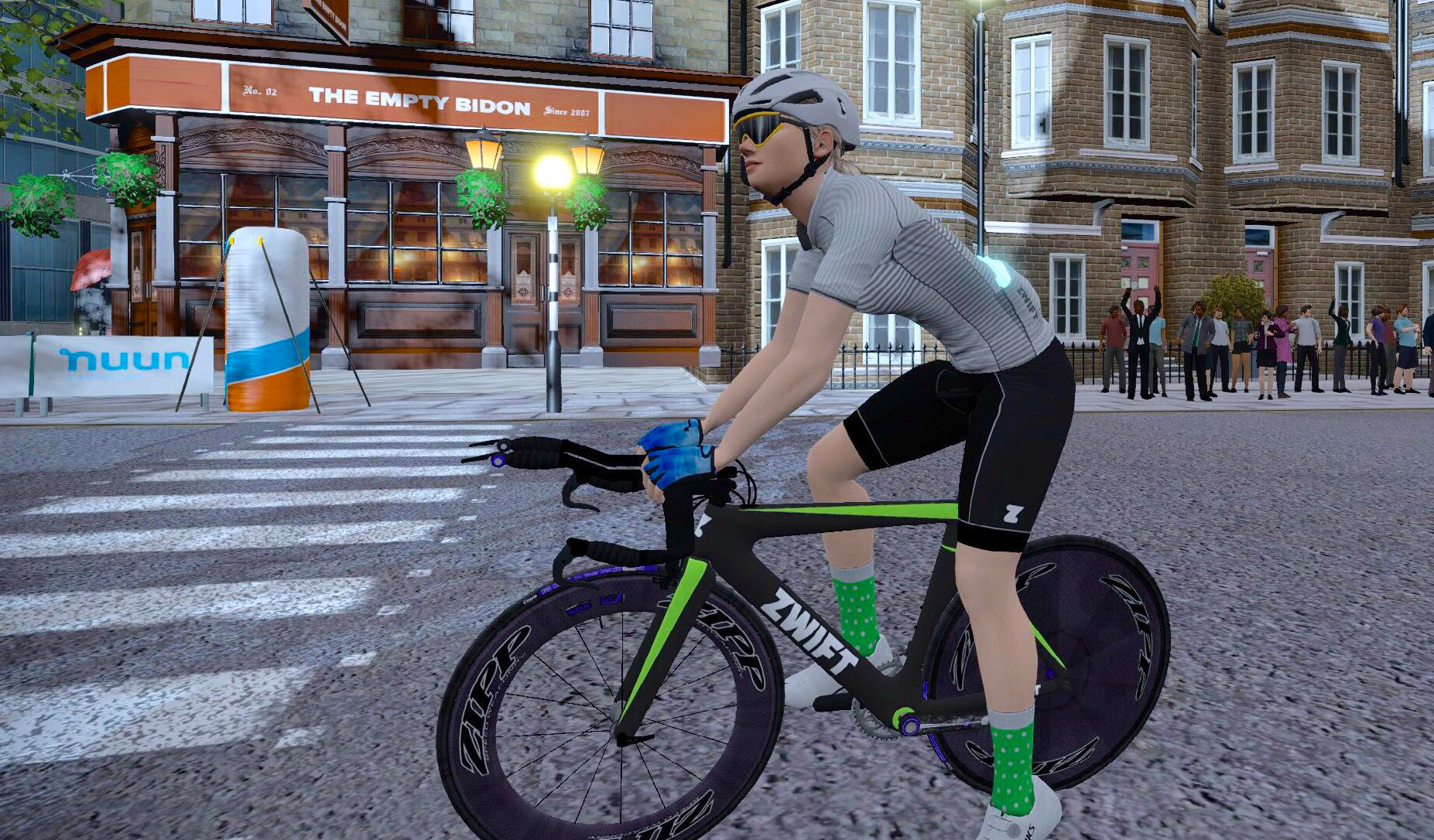 Recently, Kaufmann set her sights on a different, shorter goal--a 5-kilometer running race in December 2018. She started walking and running on Zwift earlier in the year to prepare, finding support from other Zwift runners along the way.

The forecast before the race was 32 degrees Fahrenheit with some rain. When asked if she was still planning to run, she replied in disbelief, “Oh, heck yeah! I didn’t train for nothin’.”

She says the event was hard, and she had painful shin splints that convinced her to stick to run/walks in the future. But she’s glad she took on the challenge.

Kaufmann says she’s not very competitive, though she sometimes races on Zwift. She is happy when she manages to beat someone to the finish line.

“I don’t think they like that,” she says, her voice low as if she’s sharing a secret. Then she laughs. “My age is written after my name!”

Recently, though, she has started taking competition more seriously.

After one of Kaufmann’s Zwift rides, a riding partner suggested that she enter the Wisconsin Senior Olympics.

Kaufmann prepared with the Zwift Time Trial training plan, which ended halfway through the summer of 2018. That was just in time for her to start some more high-intensity training with the Canyon//SRAM Zwift Academy.

As a reward, she earned a gold medal in the 5-kilometer time trial event in August, and a qualifying spot for the National Senior Games in Alberquerque, New Mexico. 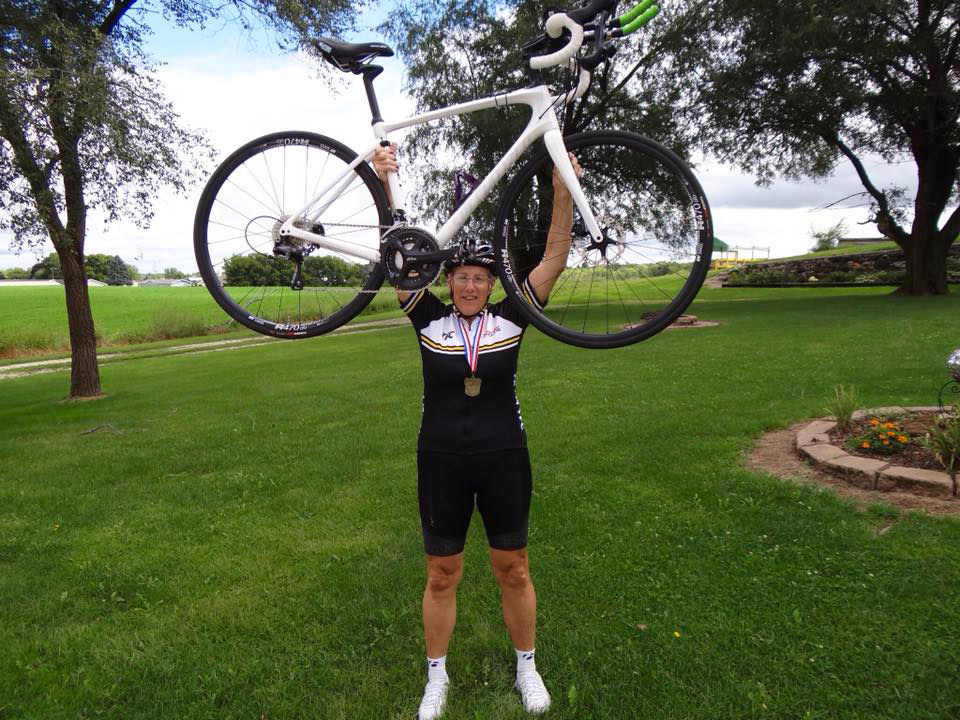 Kaufmann is retired, but she has been working part time as a cheesemaker in order to fund her trip to the National Senior Games. There, in June of 2019, she will compete in a time trial with other qualifiers from around the country. Fellow Zwifter Pav Bryan offered to coach her for the event.

“That would be the top of my bucket list if I get a medal there,” Kaufmann says.

These days, Kaufmann rides Zwift on a Tacx Neo smart trainer, in a room decorated with bike posters and a map of Watopia.

“When I get on my bike and I put Zwift on, I can’t wait to see who’s out there,” Kaufmann says. “Even if I don’t know anybody, I just throw a whole bunch of Ride Ons and I have a good time.”

She’s disappointed that more of her friends don’t ride bikes and she would love to see more people her age riding and running in Zwift.

“You don’t see too many older ladies out there,” Kaufmann says. “If we could get a little club together, that would be fun.”

It would have other benefits, too. Kaufmann’s most recent health checkup earned her glowing remarks from her doctor. She dropped her cholesterol by 20 points last year, her blood pressure and blood sugar levels are good, and she is fit and flexible. She says it’s thanks to staying active and riding her bike.

This is all the encouragement Kaufmann needs to continue to seek out more challenges. One of her biggest so far was the Scenic Shore 150 Bike Tour, where she rode 150 miles in two days to benefit the Leukemia and Lymphoma Society.

“When I see a challenge I kind of want to just keep doing them, to make sure I can do them again,” Kaufmann says “I'm a glutton for punishment. I just love riding long miles.” 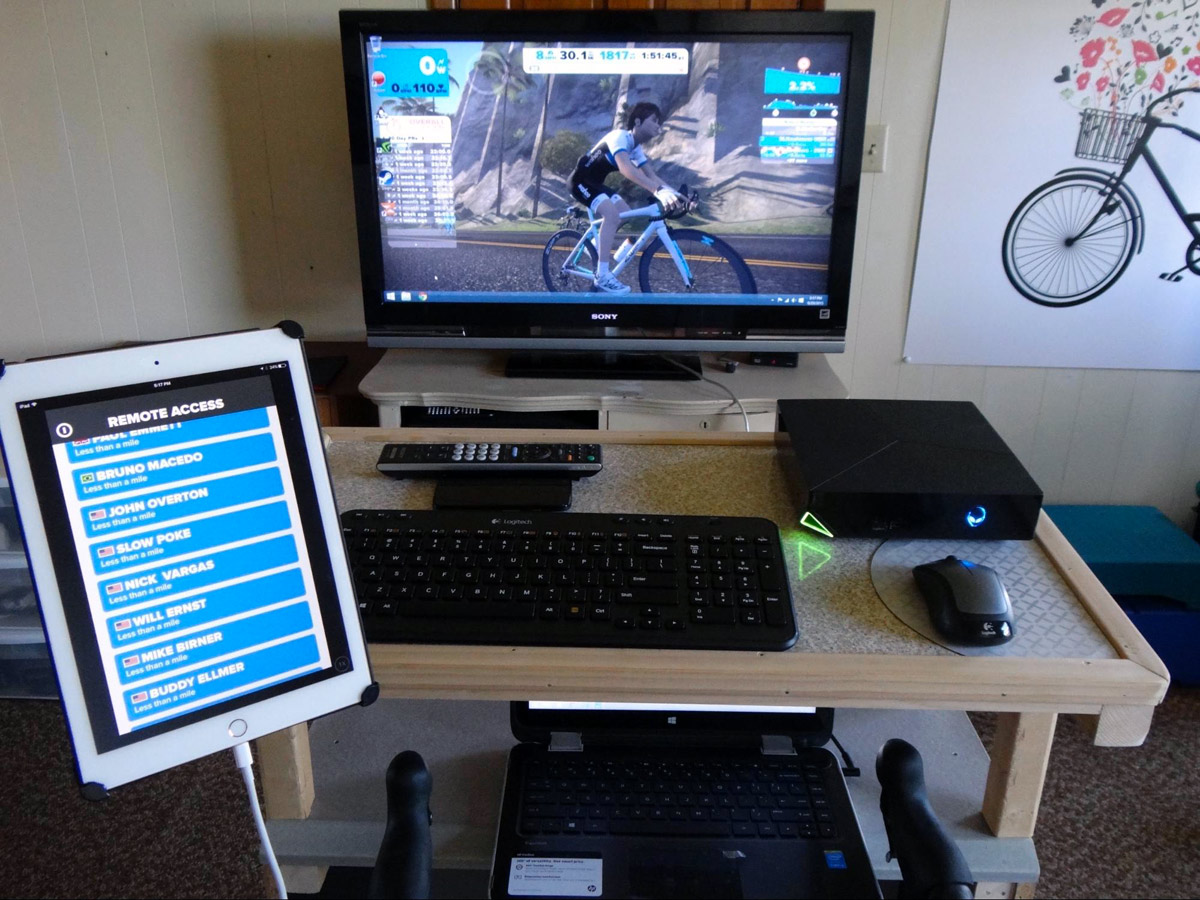 Choose Where You Want To Go over 4 years ago