The first ever Zwift Classics race was calm at first, until sneak attacks split the race in the middle and put the expected sprint finish in doubt.

The women in the London International raced 6 laps of the London Classique course, which recreates parts of the real-life Prudential RideLondon Classique race. It starts on rolling terrain before entering a mostly flat 5.4-kilometer loop. The main feature of each lap is Whitehall Hill, a 200-meter-long climb with an average 5% grade. This small climb comes about 3 kilometers before the finish line, and it’s a popular place for attacks. 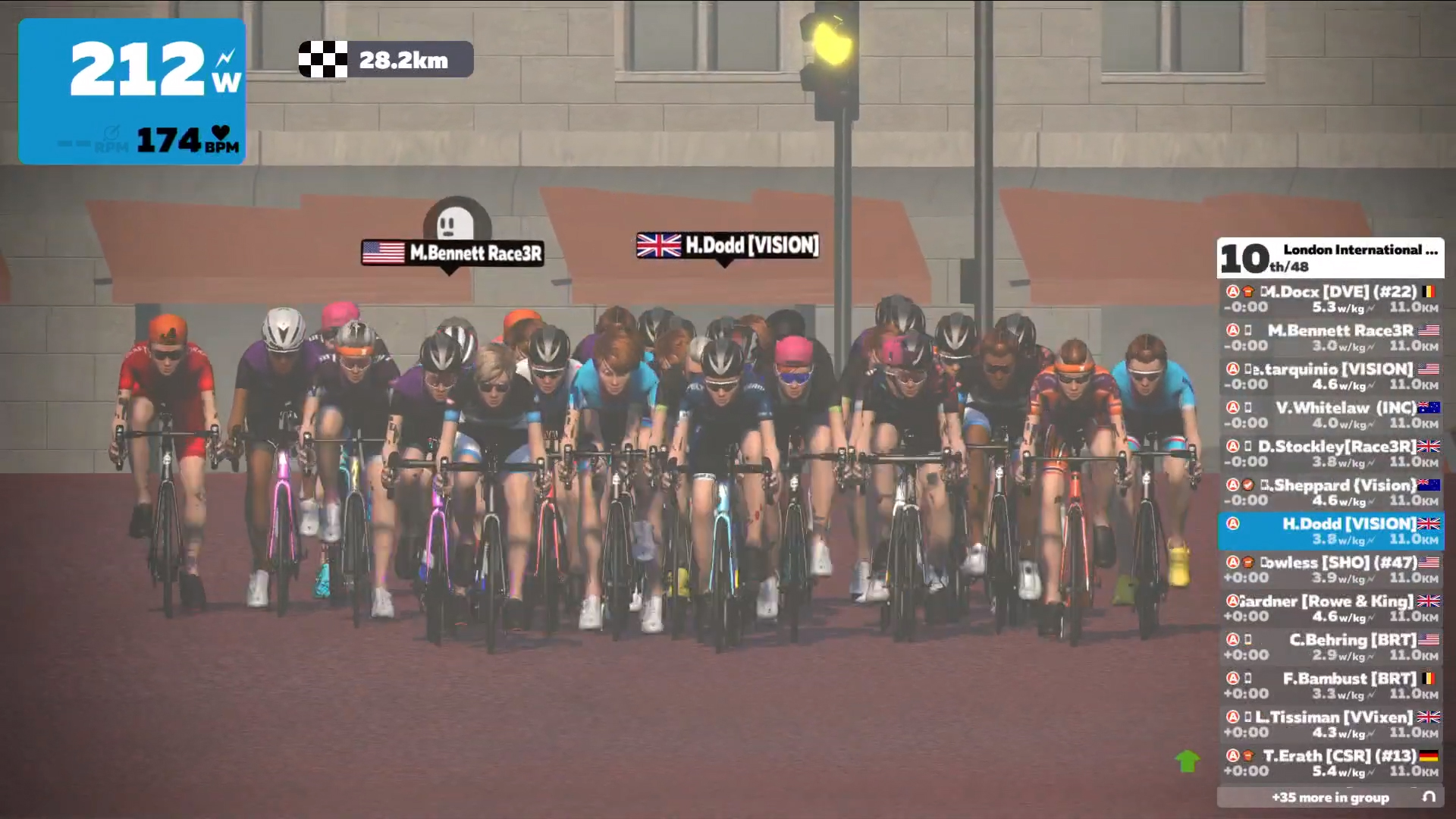 Twelve teams with up to 5 women each competed in the London International, including 3 teams of professional cyclists. For the first few laps, nearly all of the 41 starters stayed together.

The intermediate sprints held most of the early action as the racers competed for a sprint classification, receiving points based on their position across the finish line each lap.

Tanja Erath (Canyon//SRAM) clearly targeted these sprints. She won the first three handily, using the new invisibility PowerUp on two of them to stealthily break off from the group. Marlene Bjärehed (Vixen/Fox), Helen McKay (Turbo Squad), and Michele Bennet (Race3R) were also in the mix. It looked like the sprint battle would come down to these three. 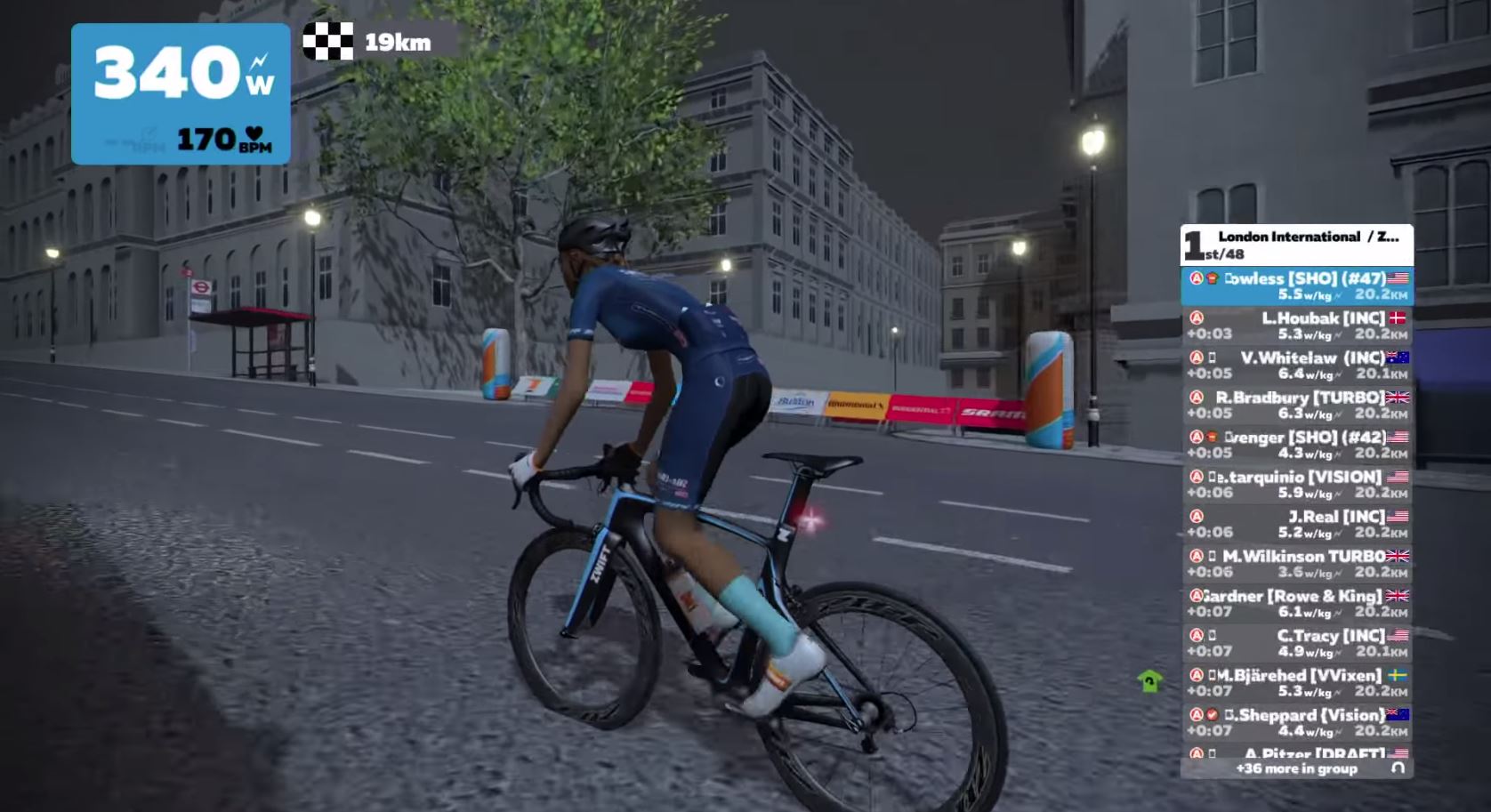 With 20 kilometers to go, Erica Clevenger (Sho-Air Twenty20) attacked, using an invisibility PowerUp to sneak away from the group. When she reappeared in front of the bunch, her teammate Shayna Powless launched an attack with an aero helmet PowerUp. She caught Clevenger and passed her just as the hill began. The others scrambled to bridge up to her, and Vicki Whitelaw (Innovation) soon passed her and charged ahead. Eventually the group re-formed, but it was suddenly much smaller! There were just 15 riders in the lead pack, including 4 riders from Innovation, 3 from Sho-Air Twenty20, 2 from Turbo, and 2 from Vision. One racer each from Rowe & King, BRT Hellcatz, Velocity Vixen, and Draft also made the selection.

A group of 17 riders was chasing hard. The leaders rolled through the lap banner without a sprint, working hard to stay away. The gap between the groups was about 15 seconds at the start of the fourth lap. By the final lap, the lead group managed to stretch their lead to about 1 minute!

With Erath in the second group, other racers saw their chance to fight for the last two intermediate sprints. Jen Luebke (Sho-Air Twenty20) and Rosamund Bradbury (Turbo Squad) started moving up the leaderboard, but in the end Erath kept her lead in the points.

The racers were focused now. Ellen Tarquinio (Vision) and Whitelaw led the way up the final climb. Whitelaw managed to break away, but she was brought back soon after. While the group was tired from her teammate’s attack, Louise Houbak (Innovation) made her move. She rolled off the front and opened up a gap with 1.5 kilometers to go. 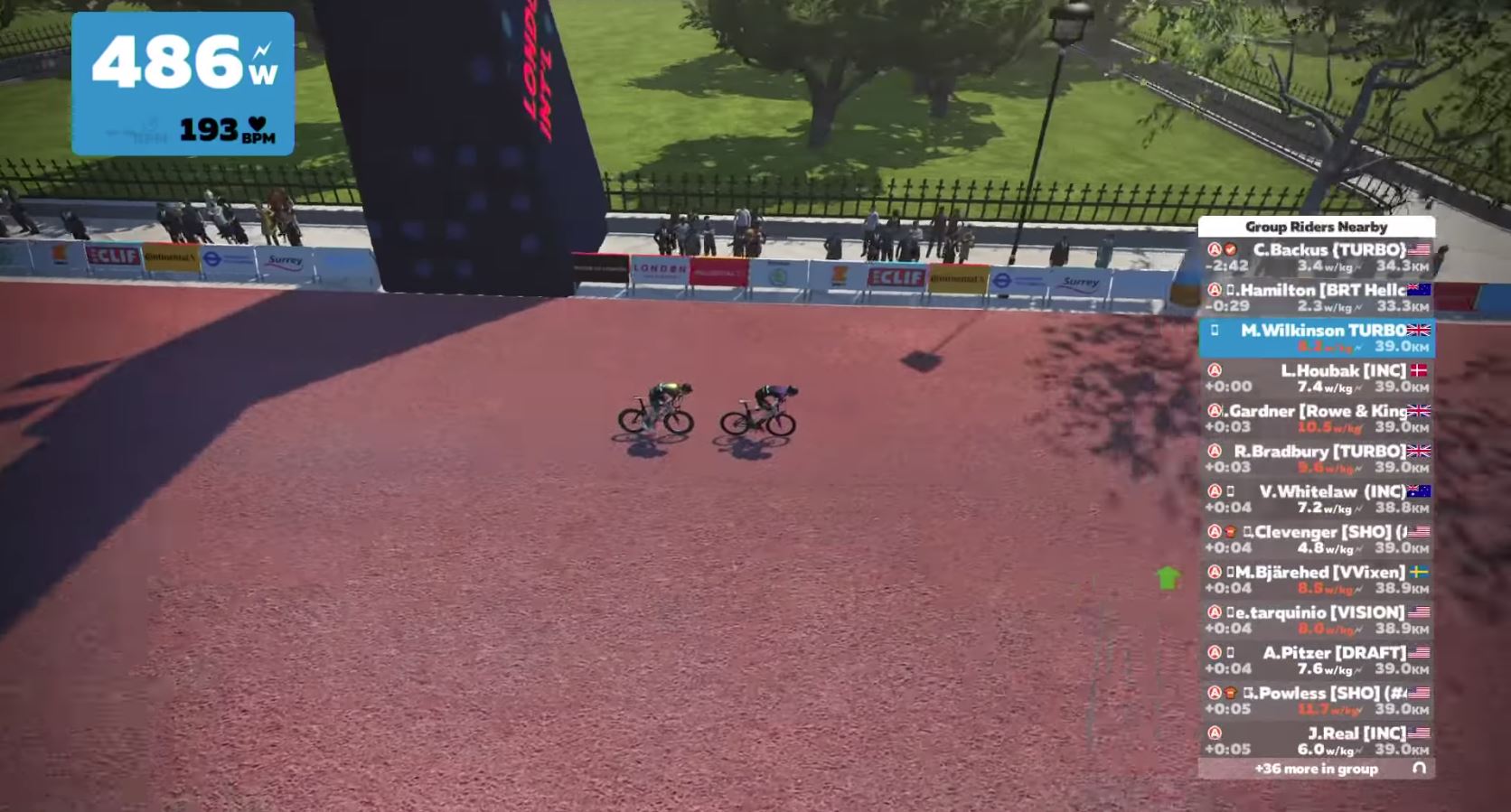 It was a dangerous attack. Houbak has won like this before. Mary Wilkinson (Turbo Squad) used an invisibility PowerUp to go after Houbak without being seen. Wilkinson slingshotted out of Houbak’s slipstream, flying around the Innovation rider and sprinting for the finish. But Houbak had a PowerUp of her own! She used the aero helmet to get a speed boost, drawing closer and closer to Wilkinson. She couldn’t quite reach her before the finish, and Wilkinson earned the first ever Zwift Classics win.

“It's pretty special to win the 1st Zwift Classic against such an amazing group of racers and especially on my ‘home’ course,” said Wilkinson, who is from Great Britain. “I certainly didn't expect to win, so it was a really nice surprise and confidence booster.”

She expected the race to come down to a bunch sprint, and she almost missed the split in the group midway through the race.

“I was sat in the pack and I saw 1 person go and wasn't too worried, but then I couldn't see what was happening because of everyone using power-ups. I was gapped slightly and had to put in quite a big effort to get across to the front 4 and then we were joined by the second small group behind. So not a major panic but small gaps become big gaps very quickly!”

Tanja Erath did miss the split, and she said she didn’t even realize it until the end of the race! She was glad to hang on to her sprint points victory, though.

“I still felt really good, was just sitting on the back (sprinter style) and actually thought we regrouped,” Erath said. “I must’ve missed the ones who had gone clear.”

Jen Leubke said she didn’t plan to go for the intermediate sprints, but she realized that she could overtake Erath if she won the last three. She won two.

“Shayna [Powless]’s attack was planned and executed perfectly, and we were excited when the group split in 2 with 3 of us in the front,” Luebke said. “I was also really trying not to let anything go up the road without us, but that finale was HARD! Also, the new PowerUps were really throwing a wrench in the plans today. The ghost [invisibility PowerUp] was quite valuable I'd say!”

She said this experience was different than the KISS Super League, where teams were racing to get the best possible finish for all of their members.

“I felt comfortable completely sacrificing to try and close the gap in the finale for my teammates, rather than waiting for someone else to do it hoping all 3 of us finish pretty well,” said Luebke. “It was cool having more Zwift community members racing too. I always love racing new fields, and it felt like a completely different field than the KISS races. I'm sure more women are excited to have the opportunity to race these Classics.”

Next Race: The Apple Lap