Alan Wyers once thought Zwift racing wasn’t for people like him.

He wanted to race. Alan had competed at the club level at many sports, including cricket, basketball, athletics, tennis, football, hockey, and triathlon. But he didn’t see many options for Zwift riders at his level to be competitive. The other racers all seemed too fast.

Today, Alan is not only a frequent racer, but he is also the lead administrator of The Friday Criterium. The race was created especially for those in lower categories. Today it’s open to everyone, but there is still a large field of C and D racers, with a separate event just for the D category. He says finding others who race at his speed has made all the difference.

On Zwift, racers of different abilities have the chance to compete with others near their level. Races are often broken into A, B, C, and D categories based on the riders’ Functional Threshold Power (FTP) in watts per kilogram. Alan races in the D category, though he has been a C racer in the past.

Alan spoke with us about finding the fun in pushing your limits, no matter your FTP. 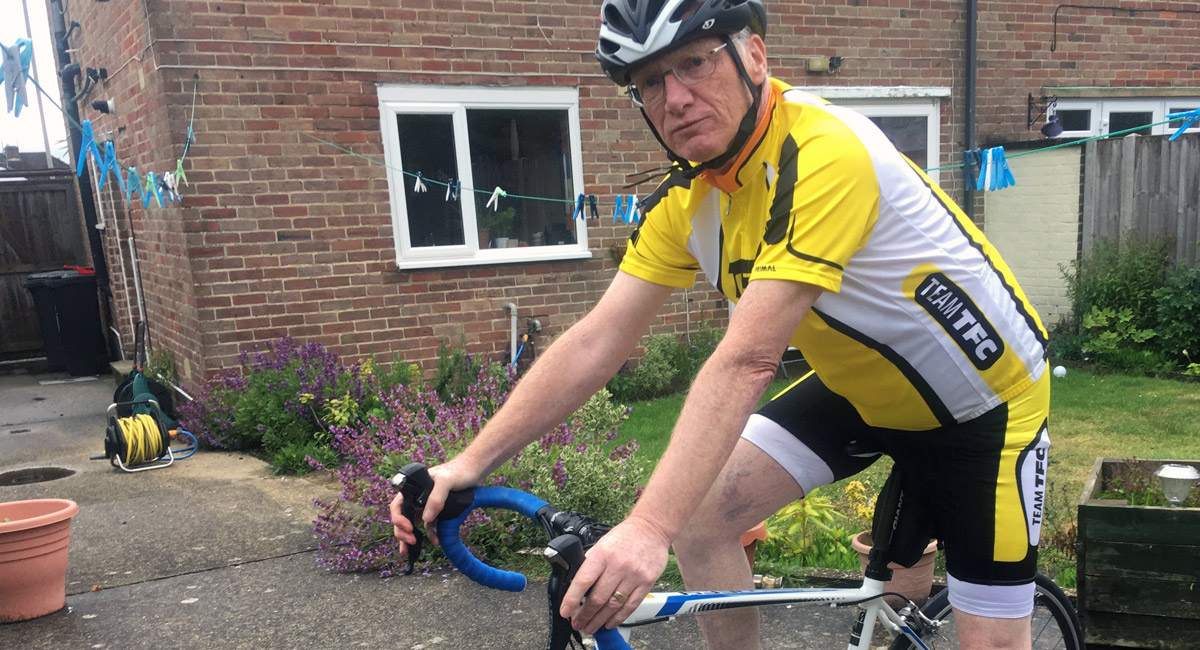 Zwift: How long have you been racing on Zwift, and how did you get started?

Alan Wyers: I started on Zwift in the spring of 2015. After being on TrainerRoad for six months and seeing Zwift showcased by Jens Voigt on “The Cycle Show,” I signed up and rode around for a few months and discovered the ZTR races. [Note: These Zwift Training Races eventually became XRS, which stands for eXperimental Race Series.] I joined in a few but thought the races were not aimed at my level and looked for something different.

Rob Bolt asked myself and a few others to help him with a race series for lower-level riders, and in October 2015 we formed The Friday Criterium Series. A great bunch of riders quickly formed in that first series. What made the difference was knowing that all the riders around you were all of a similar ability.

What’s your favorite Zwift race course, and why?

AW: Watopia Figure of Eight. It has something for everybody (two KOM’s, two sprints) and has produced some great racing. Richmond UCI comes in a very close second.

Do you have any pre-race rituals? How about post-race?

AW: I tend to go to the garage, switch on the PC. Get changed and fill up my water bottles and back to the garage. Start up Zwift, put on my shoes, and select some music. I will still have a lightweight running top on top of my baselayer and start to warm up.

In the last 30 seconds, I will ditch the running top and switch on the fan. Post race I will warm down for a few minutes, in that time open ZwiftPower and Strava, check the results and have a quick look at my data. Off the bike and have an oat bar after and cool down before a shower.

What challenges do D riders face when racing in Zwift, and how do you deal with them?

AW: You have to understand what a D rider is. We come in various categories. The older rider like me who wants to keep fit, but is coming from a very competitive background and still wants to compete. The people who are very unfit and start down in the D group and as they get fitter will move up. The overweight rider who use the platform as an aid to weight loss. The people who just enjoy riding who are at a lower level and enter the occasional race for fun/fitness.

The challenges the D rider faces are very different from the A’s who are at the top of the ladder. We have to deal with the sandbaggers who ride well within themselves but always come in just under limits--the A, B, and C riders who like to show everyone how good they are. Quite easy to spot in ZwiftPower but they can disrupt races by pushing on and taking riders with them who will drop out. It is very easy to say, “Don’t take it too seriously,” but we all want a level playing field.

The biggest challenge is the one many avoid any way they can – promotion [to the next category]. You are not expected to win a C race. Get promoted and expect as in any sport to spend a year finding your feet in a higher group. Too many riders get promoted and think they can win or finish in the top 10. Be realistic and don’t look above the bottom 5. It takes time to learn to stay in that higher pack. Learn different tactics. Train to stay there or to improve to move upwards.  Many of the D’s who haven’t the time to train and improve will always be a D, but as long as they enjoy it, then it does not matter. What matters is getting on the bike and enjoying the experience.

Convincing a lot of the D’s who have been on the limit for many months that they should move up and they will improve is difficult, as it is with the C/B categories as well. Being the best you can be is not always about winning; it’s about leaving nothing in the tank.

What makes you want to race, and why would you encourage others in lower categories to try it?

AW: We all want to push ourselves to see what we can do. Group rides are fun, but they have no edge, no adrenaline. Racing makes you want to improve and push harder. That has to start somewhere, and for most who come into Zwift, that will be in the lower levels if you are not already a club racer.

Do you prefer races where different categories race together, or where they're separate? How do you approach each one?

AW: Not bothered about either. Separate starts you can easily see who is in your race, but I keep ZwiftPower Live open so I can see who is who. I do like the KISS idea of two types of race, a longer tougher one and a shorter race where you can choose which you want to enter.

What do you think lower-category riders should look for when they're picking a race to enter?

AW: Firstly, the reason [you are racing], that will dictate a lot. If it is a series [of ongoing races], then you enter and just slog it out. If you just want a race then have a quick look to see who is in it, there may be a couple of riders you know. Look at the course to see if it suits you. Again, for the heavier D riders, the mountain is not a good place to be. If you do intend to join a team or enter a series, then experience as many courses as you can as you will encounter all of them.

When you're feeling in over your head in a race, how do you stay motivated?

AW: Don’t worry about it. There will be races where you don’t perform well, and you will see yourself fall further behind the pack. Sit back and just think, "It’s been a good workout." There is usually something you can take from it. Maybe a good sprint or KOM (King of the Mountain) or just seeing yourself improving in certain aspects of what you are trying to achieve.

AW: Plan your week to give yourself adequate recovery time. Make sure you have that one longer easy ride a week. Finding a team will give you that sense of belonging, and you will get good advice from others in the team. 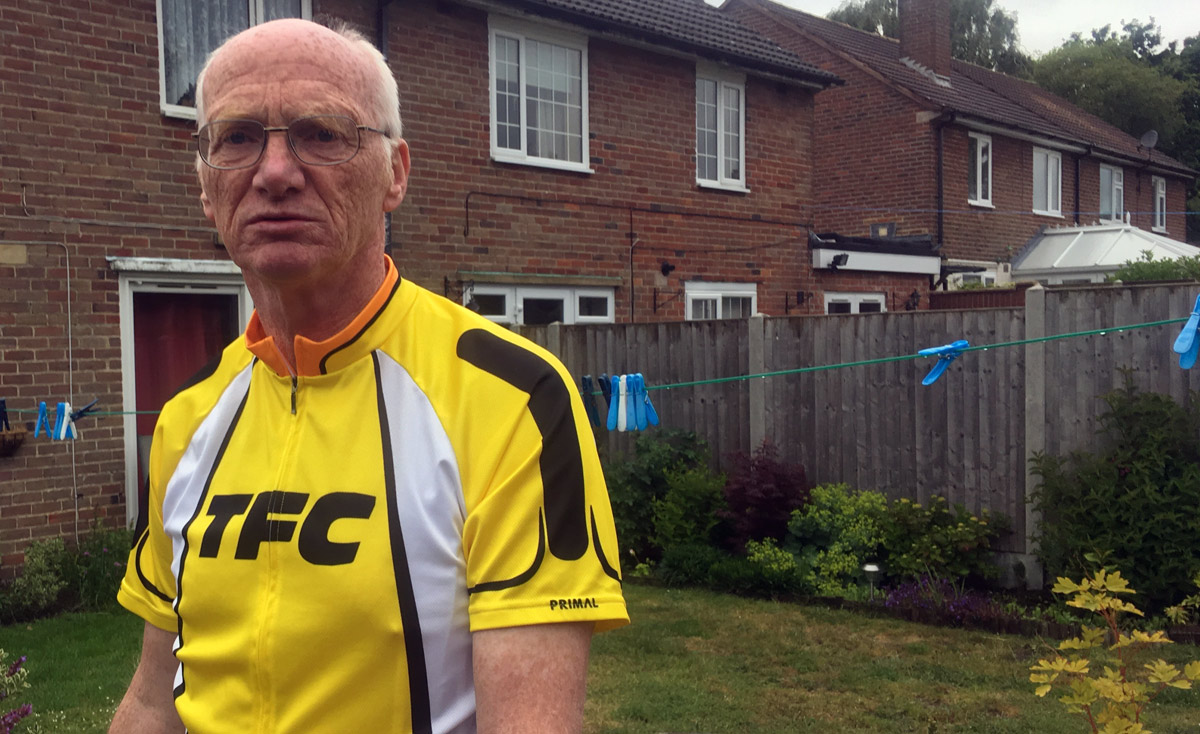 The Apple Lap Race Results over 3 years ago